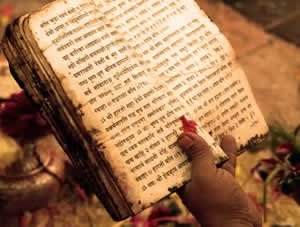 The Rigveda is an ancient Indian sacred collection of Vedic Sanskrit texts. It is one of the oldest extant texts in any Indo-European language and was composed in the north-western region of the Indian subcontinent, roughly between 1700–1100 BC (the early Vedic period).  The content was preserved for more than a millennium by oral tradition.

It is counted among the four canonical sacred texts (Sruti) of Hinduism.  The text is organized in 10 books, known as Mandalas, of varying age and length. Each mandala consists of hymns called suktas.  The suktas in turn consist of individual stanzas.  Most suktas are attributed to single authors or ‘rishis’.

The Rig veda contains an account of the origin of the world, hymns praising the gods, and ancient prayers. 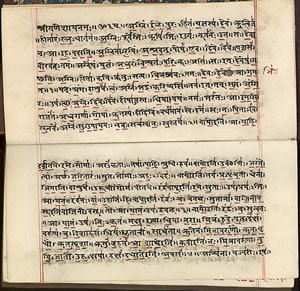 The Rigvedic hymns are dedicated to various gods, chief of whom are Indra; Agni; and ‘Soma’. The Texts give quite a fairly clear account of the Intelligence hierarchy, although the names used are Hindu specific.  Furthermore there is a clear link between the Intelligences and the functions or systems they control.  In this the gods mentioned are not at all dissimilar to the Greek gods, as there is a god of the dawn, a sun god Surya, Vayu or Vata (the wind), Apas (the waters), Parjanya (the thunder and rain), and Vac (the word).  It is interesting that scholars studying the text have noted the commonality of Intelligences found in the texts with those of other religions, leading one to believe that the record of the hierarchy is accurate.

“Some of the names of gods and goddesses found in the Rigveda are found amongst other belief systems based on Proto-Indo-European religion, while words used share common roots with words from other Indo-European languages”

Scholars studying the texts appear to have put a literal interpretation upon what is a symbolic text.  Needless to say, once you treat a document like this as some sort of literal historical record you get yourself into deep trouble.  The Rig veda is now the centre of a very acrimonious debate on the so called Indo-Aryan migration (termed "Aryan Invasion Theory") versus the claim that Vedic culture, together with Vedic Sanskrit, originated in the Indus Valley Civilization (termed "Out of India theory"), a topic of great significance in Hindu nationalism. Sad.

The Rig Veda should not be taken literally, it is not an historical record of  a people any more than the Bible is.  It has chariots, mountains,  rivers, castles and forts [palaces] and a host of symbolic objects and landscape features. It also uses the symbolism of both animals and birds.  The horse (ashva), bull and cow, and goat play an important symbolic role. There are also references to the elephant, camel (Ustra, especially in Mandala 8), ass (khara, rasabha), buffalo (Mahisa), wolf, hyena, lion (Simha), and mountain goat (sarabha). The peacock  , the goose (hamsa) and the chakravaka (Anas casarca) are some birds mentioned.

This is just one example of the scholarly literal interpretation that treats the text as a sort of historic record  – somewhat hilarious...

“Soma is a plant found in the high mountains, and it has to be purchased from tribal people”

“While the bulk of the Rigvedic hymns were composed in the Punjab,  there is no mention of either tigers or rice”

Scholars also seem unaware of the symbolism of metals [well some do] and desperately try to deduce what the ‘black metal’ is.

Part of the text describes the shamanic roots of the peoples of this area where particularly gifted shamans – those who had achieved annihilation [see Types of Spiritual experience]  and were thus ‘divine’ or ‘semi-gods’ were held in great esteem. 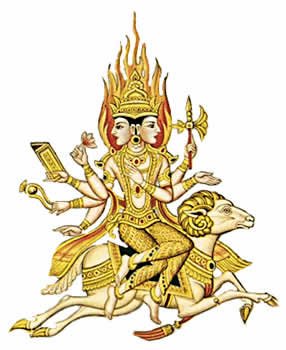 It is noticeable that the texts deteriorate in their overall understanding of the spiritual world over time.  Later ‘theological’ additions to the texts [those who have not been and have not experienced heaven] describe rituals that are almost mechanistic literal interpretations of the early texts.  Thus the castration symbolism becomes literal and the symbolism of the sacrifice made by the higher Intelligences when they gave up the right to produce copies of themselves is translated into a literal sacrifice.   Similarly the sacrifices of the shamans [often personified as animals and who perceived themselves as animals in visions] in undergoing what was often hugely dangerous forays into the spiritual world, became literal and poor animals were literally slaughtered.  So it is only the early works that are of much use from a spiritual point of view. 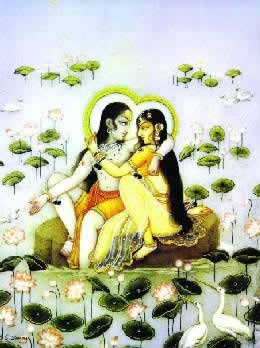 In the early works, a connection was kept between the astrological/astronomical [there was no split at this time], the spiritual and the work itself.  For example, there is an "astronomical code" in the organization of the hymns and there was an attempt to preserve the cycles in the text, so….

“According to the Satapatha Brahmana the number of syllables in the Rigveda is 432,000, equalling the number of muhurtas (1 day = 30 muhurtas) in forty years”

Debate on the date of the Rigveda, typically suggesting much earlier dates, are mostly taking place ‘outside of scholarly literature’. The problem appears to be that few scholars have taken note of the work of such authorities as Mircea Eliade, who has rigorously and exhaustively documented the commonality of symbolism and myths within early cultures world-wide from the Australian aborigines to native Inuit people.  I must admit that I [for what my opinion is worth] tend to side with those who think that the Rig veda may be much older and comes from the ‘Golden Age’ [see Ovid] of spiritual experience.  It might be worth comparing the cosmology of the African sage Ogotommeli with the observations here.

I have used a variety of sources here and tried to bring them together in the observations.