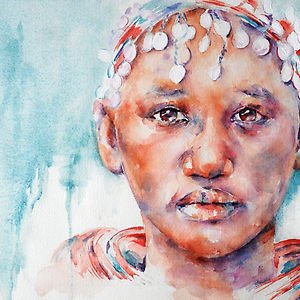 To group the spiritual beliefs of the peoples of an entire continent into one section may seem ridiculous, but there is a remarkable homogeneity about the beliefs of all the African peoples.  If we exclude Northern Africa, cut off by the Sahara from the rest of Africa, and where the Ancient Egyptian culture influenced much of the rest of this area - the African continent contains a set of belief systems that, despite language differences and ethnicity, seems almost universal in its common understanding of the spiritual realm.

Superficially, at first sight, there can appear to be significant differences, but these, on further study, are because different names are given to the same thing.  There has also been a slow erosion of some beliefs due to the spread of Islam and Christianity, but in those areas which have managed to remain free of these systems, the belief systems are common. 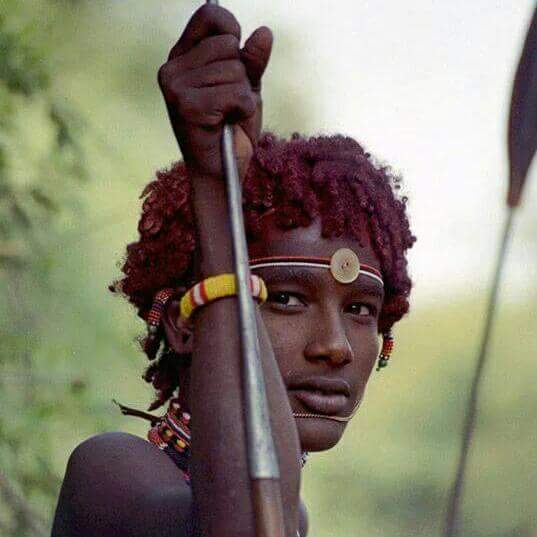 Rather intriguingly, the belief systems have remained strong and active in the West Indies in areas like Haiti, where vodou predominates.  Perhaps even more intriguingly they share a great deal with cultures like that of the Australian aborigine and other largely shamanic cultures.

I have separated out the observations of two very influential and prominent African men from the ones in this section, Vusamazulu Credo Mutwa, who is a Zulu Sangoma and Sanusi from South Africa, and Ogotemmeli, who was a blind 'wise man' from the Dogon in Africa.  Credo Mutwa has written a number of excellent books that describe his practise; and Professor Griaule, an anthropologist, after a period of over 15 years of study of the Dogon culture, was granted a series of conversations with Ogotemmeli over a 33 day time span which is documented in a series of books.

What marks out the observations in this section is that they have been predominantly made by non Africans, which is less than satisfactory, but was the best I could do given the paucity of information from local Africans themselves.  There are two reasons for this.  First, many locals do not speak or write English or a European language.  Secondly, Africans live their beliefs, they have little need to write them down for the benefit of anyone else. 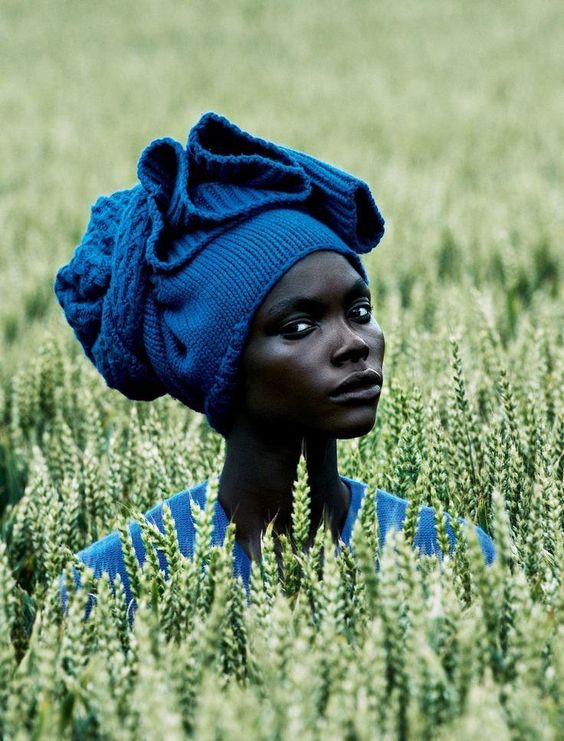 Given their experience of Europeans, who came, saw, conquered and then in some cases plundered and attempted to convert them to their own culture without in any way attempting to learn anything of theirs, I have great sympathy for them in their resistance to recording anything.  Why bother to devote long hours telling some academic with not an ounce of spiritual feeling in his dry old bones about your beliefs.  What point is there?  A materialistic academic simply wouldn't understand.

There are exceptions, in 1989 David Wilson, who has an academic background in law, traveled to southwest Nigeria where he became a member of Egbe Ifa Ogun ti Ode Remo which is a society of Yoruba diviners living in the west African rain forest. At this time he was given the name AwoFa'lokun Fatunmbi and has continued his study of traditional Yoruba spirituality on four subsequent trips to Nigeria.

And Adrian Bosher, also immersed himself in the culture of the people he met and learnt a great deal.  It was left to Lyall Watson to document what Adrian learnt however; it seems that those who live the life of Africa, simply want to revel in that life and feel no compunction to write about it. 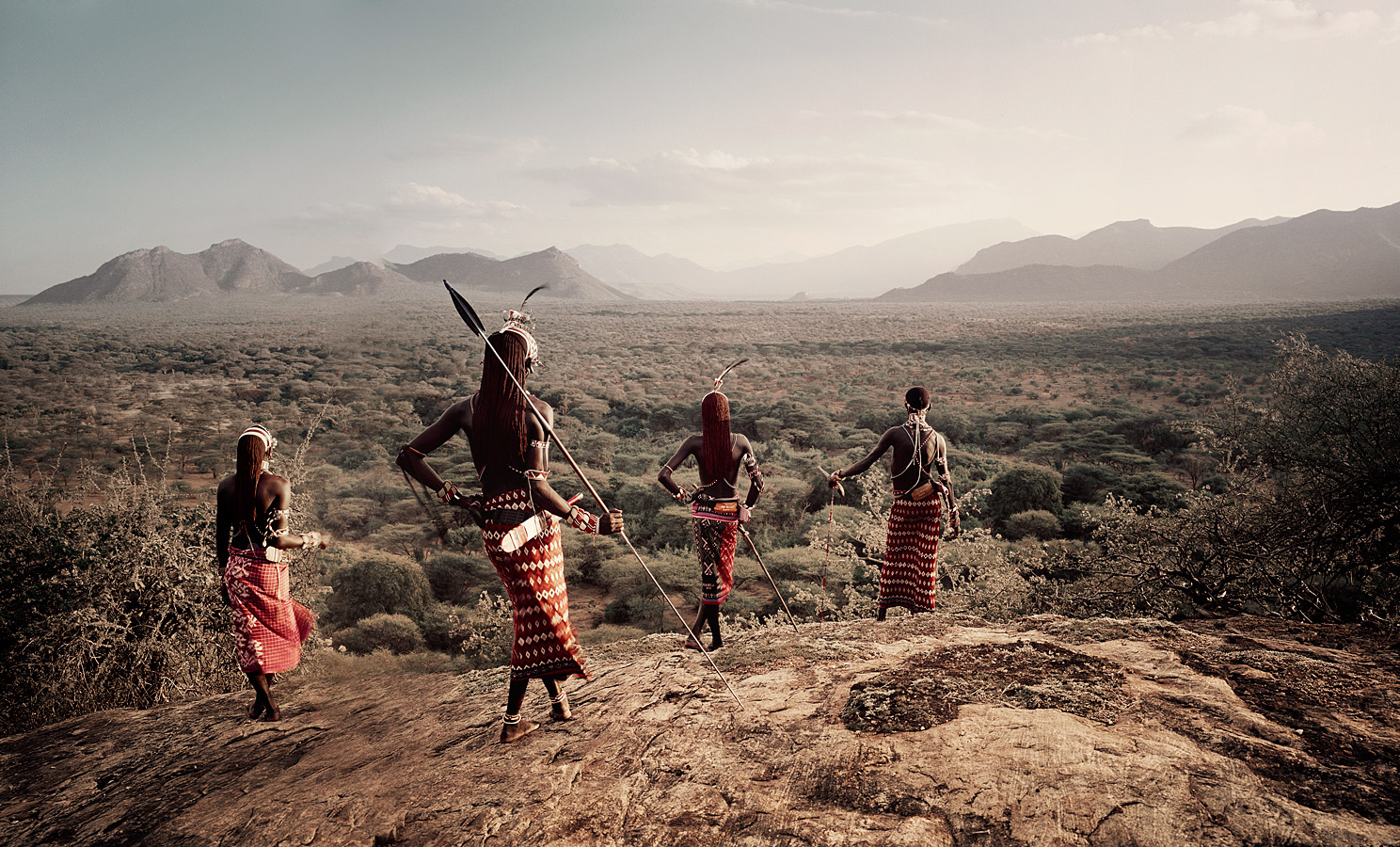 Africa is the world's second-largest continent. At about 30.2 million km² (11.7 million sq mi) including adjacent islands, it covers six percent of the Earth's total surface area and 20.4 percent of the total land area.  Africa straddles the equator and encompasses numerous climate areas; it is the only continent to stretch from the northern temperate to southern temperate zones

As of 2013, it was the second-most-populous continent, with 1.1 billion people, about 15% of the world's human population.  Africa's population is the youngest among all the continents; 50% of Africans are 19 years old or younger. 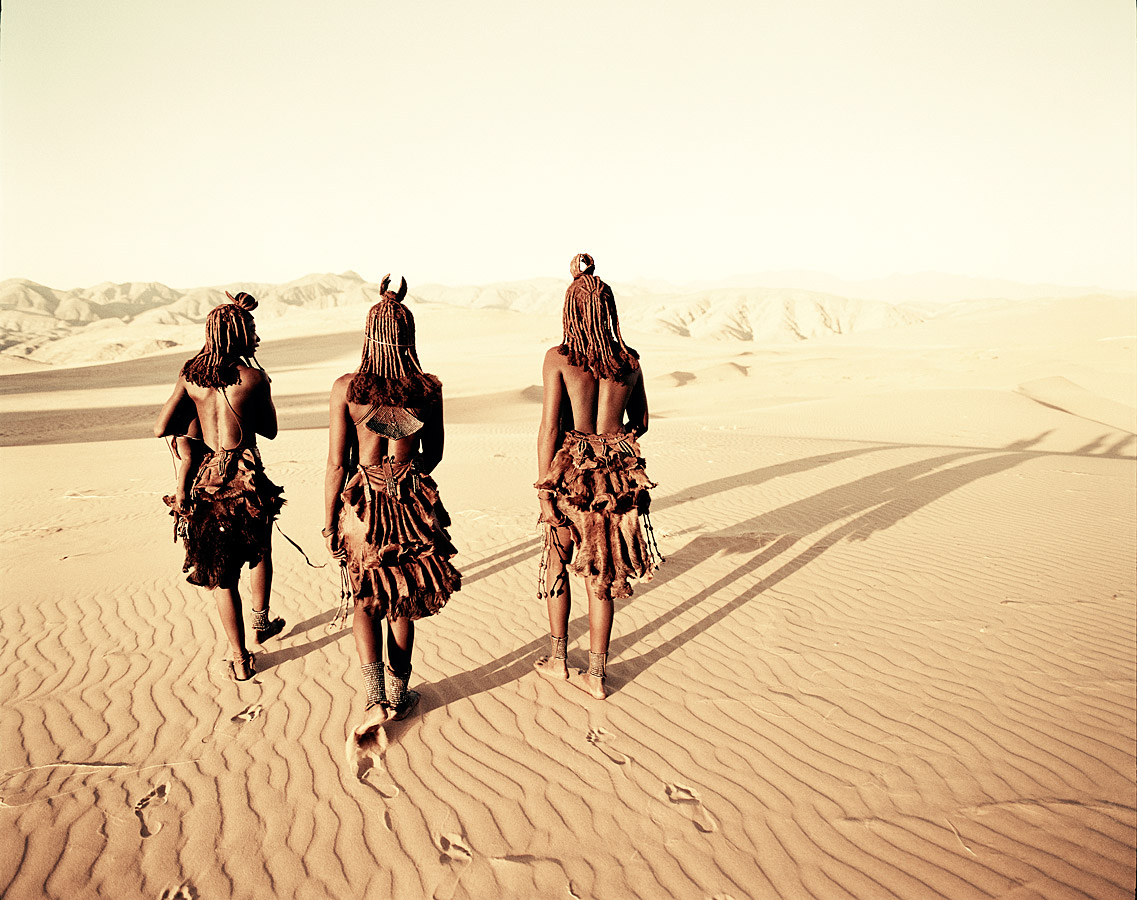 Politically, the continent includes Madagascar and various archipelagos and has 54 fully recognized sovereign states ("countries"), nine territories and two de facto independent states with limited or no recognition.  Algeria is Africa's largest country by area, and Nigeria is the largest by population.

Political boundaries do not match linguistic boundaries, which has of course caused considerable tensions in the area.  Nor do they match ethnic groups, another source of conflict.  Ethnic groups in Africa number in the thousands, each generally having its own language (or dialect of a language) and culture.

The largest ethnic groups mostly originate from major historic political kingdoms, such as in West Africa with the Sahelian kingdoms of the medieval period, like that of the Akan, deriving from Bonoman (11th century) then the Kingdom of Ashanti (17th century) and in Central Africa with the Kanuri of the Kanem and Bornu Empires. 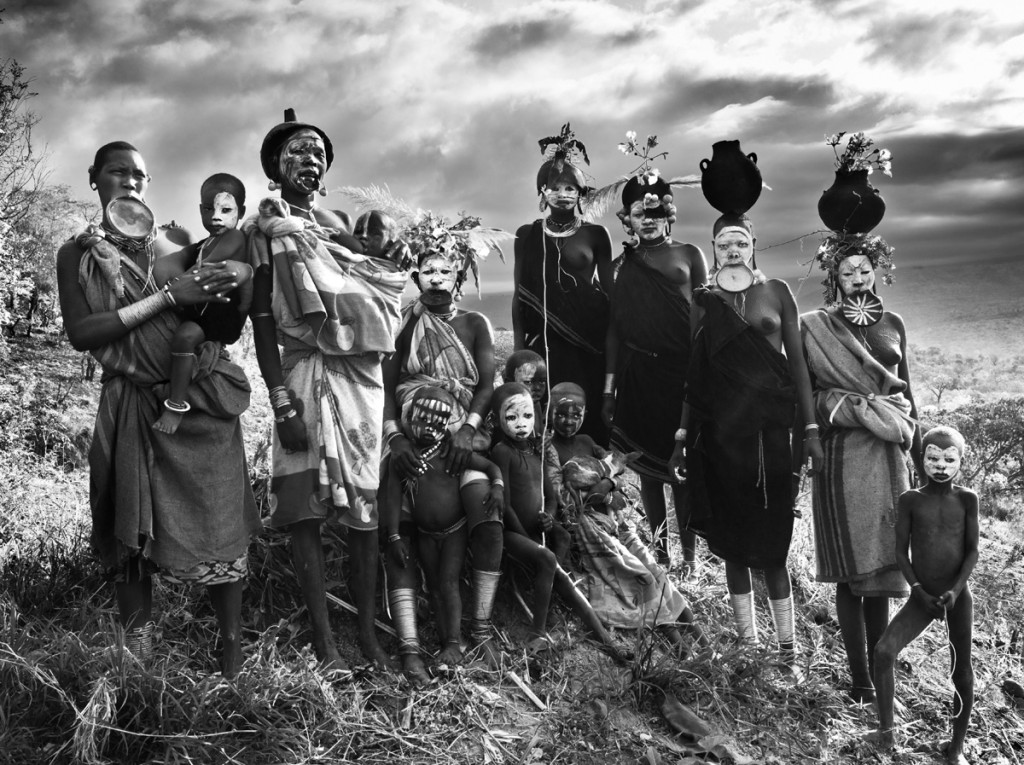 Africans may bemoan the impact of the Europeans on their political boundaries, but problems like this are worldwide.  The Scottish in Great Britain consider themselves a separate nation from the English and have been campaigning to become independent ever since I was a toddler.  The French speaking and Flemish speaking in Belgium have long wished to become separate entities.  That's politics for you.

Wikipedia has a reasonable entry for the Ethnic groups in Africa and has a number of tables showing ethnic names, language, country and population. If I list the ethnic groups with a population of over 20 million we have

To put this in perspective the Hausa as an ethnic group has almost the same population of people as the entire UK.  This 1996 map of the major ethnolinguistic groups of Africa, is from the Library of Congress Geography and Map Division (substantially based on G.P. Murdock, Africa, its peoples and their cultural history, 1959). Color-coded are major 15 ethnolinguistic super-groups, as follows: 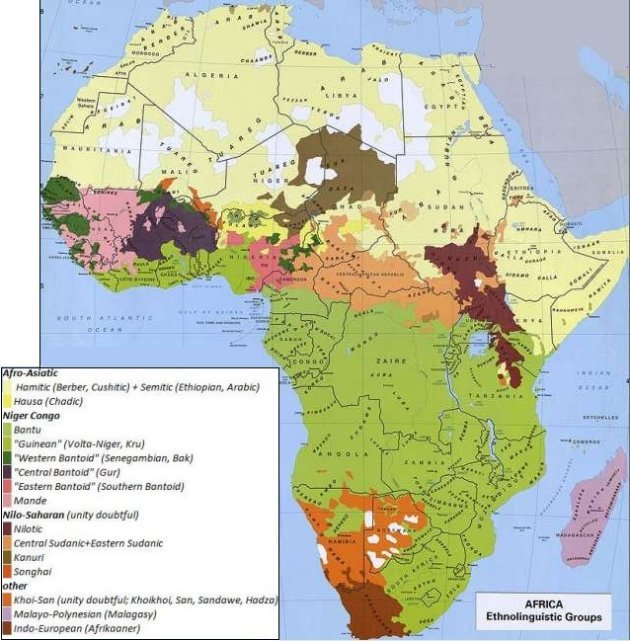 A witch doctor in African tribal society is a shaman, healer, and a person capable of dealing with 'evil'.  This evil can be the scourge of disease or the evil of men, a sorceror being a shaman who has turned 'evil', whose actions hurt and harm his fellow men and creatures.  A witch doctor in contrast is supposed to follow the path of Love and 'don't hurt'.  He or she is there to help his fellow men and women and creatures.

Those marked out to become witch doctors go through an extremely lengthy initiation process with numerous stages, not dissimilar to many of the Mystery religions.  A child may be identified because of their inherited genes, or because of an illness.  Epilepsy was at one time an indicator of great potential power to African tribal cultures and was channelled into productive use, as was blindness and what we in the west term autistic behaviour.  On the whole, the more unusual the child the better. 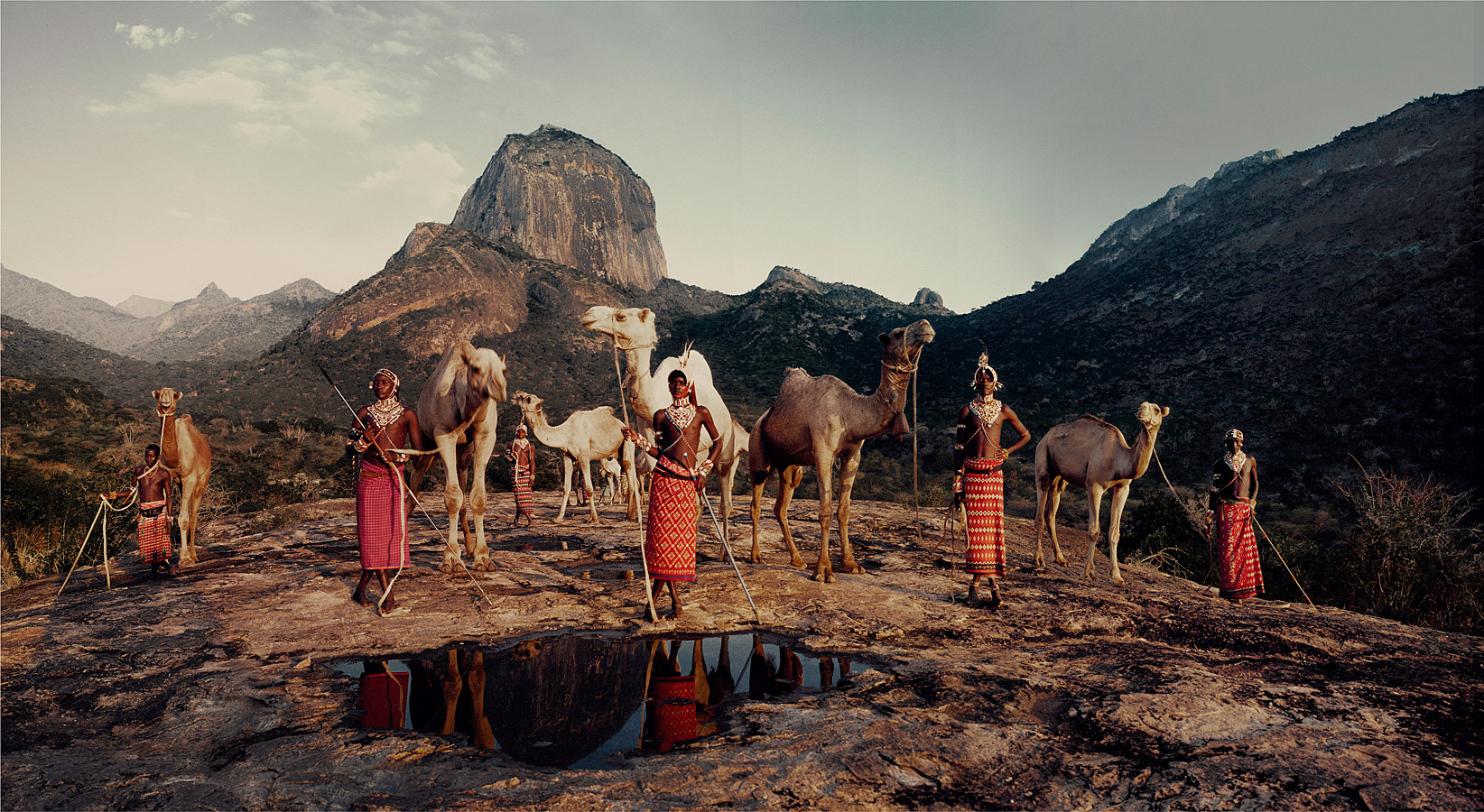 The observations provide a good overview of beliefs, linking as they do to the generic concepts found in all spiritually based belief systems.  Briefly however, the belief systems in Africa are based on the existence of the Egg which is formed of the customary and identical levels and layers recognised in other systems.  The centre of the Egg has the Ultimate Intelligence, which has a host of different names, but is always defined in the same way.

If we take just one example from African tribal beliefs, the Loa spirits in Voudoo are just like the spirits in Shinto or the Intelligences in the Hindu religion.  The purpose of the Loa is to bring order to the cosmos, as such they are the same as Intelligences.  In Voudoo there well are over 500 Loas, with a recognition that as there is ‘contrast’ in creation, there are ‘good and bad’ loas, meaning good or bad from the point of view of men.  These Intelligences have a personality just as they do in the Greek, Roman, Indian, Tibetan etc systems.  For example

One can see a direct correspondence at times between the characteristics and the Planets.