The Calculation of the Sigui - By the Dogon, the Bambara, the Bozo and the Minianka

This is an extract from quite a long article and because it has so much information in it, it needs to be read quite carefully in relation to the symbolismand concepts the system incorporates.

There are two fascinating questions within this article.

1.  How do they know about a star system so remote that it has only recently been discovered by science?  I have postulated two options - out of body experiences [the lesser likelihood] and spirit helpers [more likely], there is the option that they were taught by the Egyptians, but then this begs the question how did the Egyptians know, so in fact this would be a red herring

2.  Where did they get knowledge of such a complex symbol system, which is so in harmony with the generic one I have been able to drawup.  Were they the originators or the receivers? 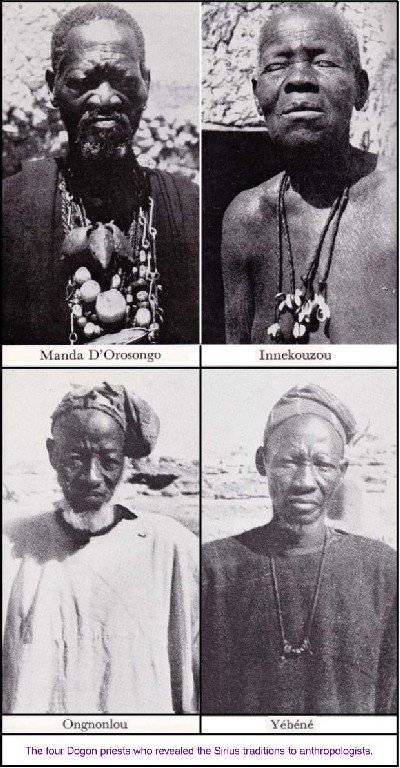 From A Sudanese Sirius System M. GRIAULE and G. DIETERLEN

The indigenous knowledge about the Sirius system which is set forth in this chapter has been gathered from four Sudanese peoples: the Dogon in Bandiagara, the Bambara and the Bozo in Segou and the Minianka in Koutiala.

The main investigation was carried out among the Dogon between 1946 and 1950, where the four major informants were:

The system as a whole was expounded by Ongnonlou, its various details by the other informants. Although he was not responsible for drawing up the Sigui calendar, Ongnonlou was acquainted with the principles behind it and, during the periods when the investigators were there, was able to obtain further information from the Arou at Yougo Dogorou on the one hand and, on the other, from the permanent steward of the supreme chieftain of the Arou at Arou-by-Ibi. Ongnonlou is in fact patriarch of the family from which the next holder of the title will be designated when the next holiday comes around.

Ongnonlou's learning, within an extremely secret body of knowledge, thus represents an initial acquaintance or, to use a Bambara expression, a 'slight acquaintance', and this point should be kept in mind.

Just as, for the layman, the star Sirius is the brightest star in the sky, attracts his gaze, and plays the major role in the computation of the Sigui, so the rules of the Sirius system as revealed to the initiated in the first instance are at once simplified in some parts and complicated in others, so as to divert the attention from calculations which are more secret by far.

It must therefore be understood, once and for all, that the system described here represents one phase of the revelations permitted to initiates who are top-ranking but not specifically responsible for the calculations to do with this part of the sky.

For our part, the documents gathered together have not given rise to any original hypothesis or research. They have been simply pieced together in such a way that the accounts of the four principal informants are merged into one and the same statement.

The problem of knowing how, with no instruments at their disposal, men could know the movements and certain characteristics of virtually invisible stars has not been settled,  nor even posed. It has seemed more to the point, under these special circumstances, to present the documents in the raw.

THE CALCULATION OF THE TIME OF THE SIGUI

Every sixty years the Dogon hold a ceremony called the Sigui (ceremony). Its purpose is the renovation of the world, and it has been described at length by them in 1931.  Since the beginning of this investigation, we were faced with the question of determining the method used to calculate the period separating two Sigui ceremonies. The common notion, which dates back to the myth of creation, is that a fault in the Yougo rock, situated at the centre of the village of Yougo Dogorou, lights up with a red glow in the year preceding the ceremony. This fault contains various altars, in particular busts of Andoumboulou (the name given to the people of small stature who formerly lived in the rocks), and a rock painting called arnma bara, 'god helps', to which we shall refer later.

Furthermore, and before this red glow appears, a spot situated outside the village becomes covered with elongated gourds of a type which no one would have sown.

When these signs are observed, an apparently simple procedure of calculation is carried out, solely by the people of Yougo Dogorou who belong to the Arou tribe:………..

According to Manda, the priest, the calculation of the Sigui is recorded above the door of the sanctuary of Binou by two figures made of millet pulp representing the god Amma and his son, Nommo, Instructor of the new world.  The first consists of a vertical oval - the egg of the world - and its major axis, Amma in the original darkness. In the right-hand half, each year is marked with a dot, starting from the bottom. When the seventh year comes round, a kind of trident is drawn on the outside, as an extension to the line of dots. The same thing is done on the left-hand side, in the order top-to-bottom.

Fourteen years are counted in this way: the seven twin years during which the world was created, and to which a unit, symbolizing the whole, is added.  Diagrammatically speaking, the figure shows the god's last gesture, raising one hand and lowering the other, thereby showing that sky and earth are made.

This drawing is repeated four times, making it possible to reckon a period of sixty years; it is accompanied by the figure of the Instructor,  composed of two vertical legs supporting a head atop a long neck. During the first thirty years which are recorded by two ovals, the figure features only the right leg. During the second thirty-year period, the left leg is made a little longer each year in such a way that when the Sigui actually occurs it is the same length as the right leg. It is by allusion to this figure that people talk about the Sigui 'getting to its feet' during this latter period.