William Seabrook - The Hougoun and the Trinity 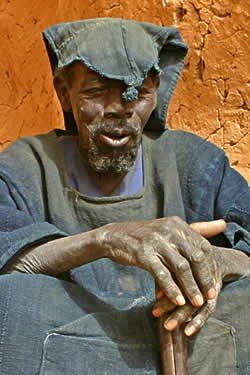 The Hougoun – the wise man – of the mountain people of Africa in Habbe from which this quote comes was being questioned by William Seabrook about the nature of the beliefs of his people in order that Seabrook could compare his beliefs and those of the wise man.  Seabrook was an open minded and very even handed writer but because he was Christian he started by trying to compare the Hogoun’s wisdom derived from actual spiritual experience and that of the Christian/Jewish/Islamic  system derived by theologians [and no experience].  He got into difficulties and began to realise it was no use comparing.  In the quote below Amma is equivalent to the Ultimate Intelligence - a concept Seabrook has difficulty with because the theologically invented view is that of a fatherly human figure……

Is your Amma anything like our God, or like a man?   Has he a body, hands, face?

Question. We likewise teach that no man may look upon the face of God and live, but there are some …. who claim that they can talk with him and even hear his voice. Is it thus with Amma?

The Hogoun. We can also speak to Amma, and we believe that he can hear our voices, but no man has ever heard the voice of Amma.

Question. And the dwelling place of Amma?  We say that God dwells ‘on high’, and when we pray we begin by saying, " Our Father which art in Heaven”

The Hogoun:. We lift up our arms and our eyes, but we begin our prayer by saying “Amma, above, below, and round about “ for Amma is everywhere. He manifests himself in everything, but he himself remains invisible.

It was at this point in the conversation that the Hogoun pronounced his startling formula of a Trinity and began explaining it. It was precisely in order to manifest himself, precisely for the purpose of manifesting himself, that Amma, invisible and indivisible made himself Three.

" There was first of all Amma,” said the Hogoun.  " Nothing existed except himself. In order to create the material world, people, animals, trees, plants, grass and all that lives, he divided himself into two principles :  the male principle, the fructifier, and the female principle, the bearer. From the combination of these male and female principles, which are opposite, yet one, all life is born. And this is our Trinity, Amma, the One, Amma the Father, and Amma the Mother. For the oneness of Amma there can be no symbol. For the maleness of Amma we have chosen the natural emblem [the penis] and planted it on our altars. The whole earth and all that it bears is the true symbol of Amma the Mother, the bearer, but when we wish to symbolize this third part of the trinity on an altar we do so with a bowl or cup.