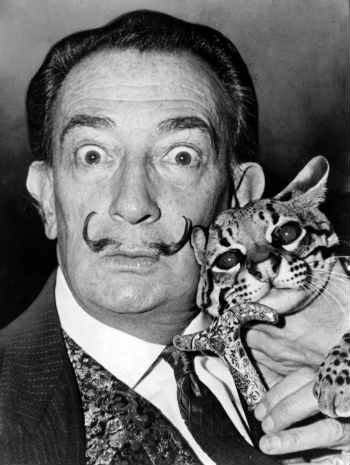 Dali is reputed to have been rhesus negative

Rhesus positive blood is, according to the scientific community, a gene mutation that occurred in the human population to protect the people against Toxoplasma, a parasite that causes toxoplasmosis.  This parasite can only sexually reproduce in cats [members of the felid family], thus the mutation is believed to have occurred in populations with high exposure to the cat family – Africa, Asia, North America etc.  Europeans, especially northern Europeans, were not exposed to the cat family until the introduction of the domestic cat.  As such the presence of the rhesus positive genetic mutation is lower in European and Scandinavian populations.  The African population has a very high percentage of rhesus positive blood, as does the Asian population.  But if we look at a sample study of the European population only about 85% are rhesus positive.

The rhesus negative or positive factor of itself therefore indicates nothing about the capabilities of the person 'psychically'.  But parasites can cause disease and one of the areas the parasites attack is the brain.  The two papers I have included in the background section show that over time quite extensive damage to the brain can occur without the person being aware that it is happening.  And as a consequence of this attack many rhesus negative people ill equipped for the attack start to get ‘psychic symptoms’ ranging from the benign vision or hallucinations, to more problematic effects.

“ infection with the parasite has recently been associated with a number of neurological disorders, particularly schizophrenia"

In effect if you are rhesus negative and get attacked by this parasite you could easily end up psychic.

If you have kept a cat or live with a cat the chances of infection are extremely high.

The parasitic protozoan Toxoplasma gondii infects about one-third of the population of developed countries. The life-long presence of dormant stages of this parasite in the brain and muscular tissues of infected humans is usually considered asymptomatic from the clinical point of view. In the past 20 years, research performed mostly on military personnel, university students, pregnant women and blood donors has shown that this 'asymptomatic' disease has a large influence on various aspects of human life. Toxoplasma-infected subjects differ from uninfected controls in the personality profile estimated with two versions of Cattell's 16PF, Cloninger's TCI and Big Five questionnaires. Most of these differences increase with the length of time since the onset of infection, suggesting that Toxoplasma influences human personality rather than human personality influencing the probability of infection. Toxoplasmosis increases the reaction time of infected subjects, which can explain the increased probability of traffic accidents in infected subjects reported in three retrospective and one very large prospective case-control study. Latent toxoplasmosis is associated with immunosuppression, which might explain the increased probability of giving birth to a boy in Toxoplasma-infected women and also the extremely high prevalence of toxoplasmosis in mothers of children with Down syndrome. Toxoplasma-infected male students are about 3 cm taller than Toxoplasma-free subjects and their faces are rated by women as more masculine and dominant. These differences may be caused by an increased concentration of testosterone. Toxoplasma also appears to be involved in the initiation of more severe forms of schizophrenia. At least 40 studies confirmed an increased prevalence of toxoplasmosis among schizophrenic patients. Toxoplasma-infected schizophrenic patients differ from Toxoplasma-free schizophrenic patients by brain anatomy and by a higher intensity of the positive symptoms of the disease. Finally, five independent studies performed in blood donors, pregnant women and military personnel showed that RhD blood group positivity, especially in RhD heterozygotes, protects infected subjects against various effects of latent toxoplasmosis, such as the prolongation of reaction times, an increased risk of traffic accidents and excessive pregnancy weight gain. The modern human is not a natural host of Toxoplasma. Therefore, it can only be speculated which of the observed effects of latent toxoplasmosis are the result of the manipulation activity of the Toxoplasma aimed to increase the probability of its transmission from a natural intermediate to the definitive host by predation, and which are just side effects of chronic infection.
PMID: 23225875

Toxoplasma gondii is the most common protozoan parasite in developed nations. Up to 43% of the French population may be infected, depending on eating habits and exposure to cats, and almost one third of the world human's population may be infected. Two types of infection have been described: a congenital form and an acquired form. Although the medical profession treats these latent cases as asymptomatic and clinically unimportant, results of animal studies and recent studies of personality profiles, behavior, and psychomotor performance have led to reconsider this assumption.

Among rats: parasite cysts are more abundant in amygdalar structures than those found in other regions of the brain. Infection does not influence locomotion, anxiety, hippocampal-dependent learning, fear conditioning (or its extinction) and neophobia in rats. Rats' natural predator is the cat, which is also T. gondii's reservoir. Naturally, rats have an aversion to cat urine, but the parasite suppresses this aversion in rats, thus influencing the infection cycle. Tachyzoites may invade different types of nervous cells, such as neurons, astrocytes and microglial cells in the brain, and Purkinje cells in cerebellum. Intracellular tachyzoites manipulate several signs for transduction mechanisms involved in apoptosis, antimicrobial effectors functions, and immune cell maturation. Dopamine levels are 14% higher in mice with chronic infections. These neurochemical changes may be factors contributing to mental and motor abnormalities that accompany or follow toxoplasmosis in rodents and possibly in humans. Moreover, the antipsychotic haloperidol and the mood stabilizer valproic acid most effectively inhibit Toxoplasma growth in vitro with synergistic activity.

The effects of the parasite are not due to the manipulation in an evolutionary sense but merely due to neuropathological or neuroimmunological effects of the parasite's presence. Toxoplasmosis and schizophrenia: epidemiological studies point to a role for toxoplasmosis in schizophrenia's etiology, probably during pregnancy and early life, this association being congruent with studies in animal models indicating that animal exposures of the developing brain to infectious agents or immune modulating agents can be associated with behavioral changes that do not appear until the animal reaches full maturity. Psychiatric patients have increased rates of toxoplasmic antibodies, the differences between cases and controls being greatest in individuals who are assayed near the time of the onset of their symptoms. The increase of dopamine in the brain of infected subjects can represent the missing link between toxoplasmosis and schizophrenia. Toxoplasmosis and Obsessive Compulsive Disorder (OCD): the seropositivity rate for anti-T. gondii IgG antibodies among OCD patients is found to be significantly higher than the rate in healthy volunteers. Infection of basal ganglia may be implicated in the pathogenesis of OCD among Toxoplasma seropositive subjects. Toxoplasmosis and personality: infected men appear to be more dogmatic, less confident, more jealous, more cautious, less impulsive and more orderly than others. Conversely, infected women seem warmest, more conscientious, more insecure, more sanctimonious and more persistent than others. It is possible that differences in the level of testosterone may be responsible for the observed behavioral differences between Toxoplasma-infected and Toxoplasma-free subjects.

In the future two major avenues for research seem essential. On one hand, prospective studies and research efforts must still be carried out to understand the mechanisms by which the parasite induces these psychiatric disorders. On the other hand, it has not yet been demonstrated that patients with positive toxoplasmic serology may better respond to haloperidol's or valproic acid's antiparasitic activity. These results may appear as a major issue in the drug's prescribing choices and explain variability in response to the treatment of patients with schizophrenia that is not explained by the genetic polymorphism.

Brain damage caused by the parasite, either passed to us during pregnancy or by our exposure to cats.  If we are rhesus negative we have no inherited protection.

It may be worth adding that in addition to this proven link, another extremely important piece of research to emerge from analysis of blood types and autoimmune diseases, is that there is a definite link between a person having or developing an autoimmune disorder and being rhesus negative. For example
“The distribution of ABO blood groups and rhesus factor was studied in patients with myasthenia gravis as compared with the control. There was a statistically significant association of the diseases with the rhesus-negative phenotype …..the Rh-negative phenotype shows a 1.3-fold increase in the risk of the disease as compared with those having Rh-positive persons. PMID: 7626990”

There is a useful site on being Rhesus negative which has a clickable map showing percentages by country.

The following table contains a list of people who, according to various websites are rhesus negative.  Because I have not been able to find any proof that they are, I have not included the observations here, but it does have some interest, as a speculative list.  Perhaps of especial interest is the fact that three of the Beatles appear to have been rhesus negative.