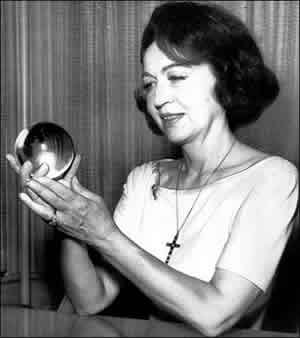 Jeane L. Dixon was born Lydia Emma Pinckert, January 5, 1904, she died on January 25, 1997.  She was one of the best-known American 'prophets' of the 20th century.  She had a syndicated newspaper column, appeared on TV and radio, was called upon by everyone from film stars to politicians to provide prophesies and she became even better known when Ruth Montgomery published a book of her life story.  It is Ruth’s book that I have used as a source on her life and prophecies – A Gift of Prophecy.

Jeane had all the hallmarks of a genuinely gifted medium.  She had inherited ‘psychic’ ability and the prophecies she made were based on symbolic visions,  not verbal  communication from some out of body traveller  – no words just symbols.

“I first began writing yearly columns about Jeane Dixon's forecasts in 1952, simply as a change from the steady discourses on politics and world affairs. Gradually I became sufficiently impressed with the phenomenal accuracy of her predictions to be relieved when on occasion she missed.  Had she always been right, some of her forebodings would have seemed too horrific for comfortable contemplation. ...Jeane made a few forecasts that failed to occur.  She predicted that Red China would plunge the world into war over Quemoy and Matsu in October of 1958; she thought that labor leader Walter Reuther would actively seek the presidency in 1964.   She blames herself for these errors, believing that she was shown correct symbols but misinterpreted them” – Ruth Montgomery.

Jeane was born in a Wisconsin lumbering village, but moved as a child to California with her parents Emma von Graffee and Frank Pinckert.  Jeane’s parents had spent their honeymoon in America and liked it so much they had decided to emigrate from Germany.  Her father ended up being a very successful businessman and was able to retire at 45.

Jeane was tutored at home by governesses and by her parents, so she was largely protected from schools and their indoctrination.  Furthermore, her parents seemed to be both interested in the spirit world.  Her father took a great interest in Native American Indian history and practises, as well  - and here it does get interesting - in gypsy lore.  Her mother was unsurprised by later revelations about her gifts “Mother didn’t seem to consider it unusual, she simply said that if God had given me that gift she wanted me to use it for good on this earth”.  Both her parents were theoretically Catholics and Jeane remained a very firm believer in the spiritual world all her life.  Her mother however, told her that ‘no soul should be tied to one church because, no matter where we worship, the same Almighty power guides each of us”.

The family were interested in astrology and palm reading.  And perhaps of extra interest is that her mother believed in destiny but she believed gifts and personality were allocated on conception - “She felt that it was her responsibility to see that we developed whatever talents were given to us at the time of conception”.

One day, when her father found out a gypsy woman was camped on his friend Luther Burbank’s estate, he arranged for Jeane, then eight years old, to go and see her.  It was this meeting that changed Jeane’s life.  Jeane eventually went with her mother.

The gypsy told them that Jeane would be famous and able to prophecy because she was “blessed with the gift for prophecy”, she also said ‘Never have I seen such palm lines!!”  She gave Jeane a crystal ball and told her the markings on her hand were those of a 'mystic' and that she should use the ball to meditate.  And Jeane never looked back.  She did indeed use the crystal ball, but found that most of her most accurate visions were not crystal ball dependent.

How did she get all these prophetic insights?  Other than her inherited genes and a firm belief in the spiritual world, Jeane also adopted a diet that was largely based on vegetables, fruit and juice.  She did not smoke or drink alcohol and avoided stimulants and she did this on a permanent basis.  She also used a form of ritual and ceremony when she wanted to use her skills standing at her bedroom window, facing east and reciting the 23rd Psalm over and over again.  Furthermore, according to the biography, her whole life was 'based on the idea of serving others'.  But I'm afraid having read the biography this may have been true in part [and I have given her the benefit of the doubt when listing the activities she used] but given the money she made from the books and television and radio appearances, the whole truth is not being delivered here.

There is a telling paragraph in the biography when she gives friends a tip for the Kentucky Derby of 1953 and an even more intriguing example when she appears to influence a lottery draw so that her husband wins a car.  I think she not only had the gift of prophecy, but could influence outcomes as well.

Which is partly why I have labelled her as a magician.  There are however other reasons.

Prophecy is a strange business.  Knowing the future is not always helpful, it can worry people silly thinking something is going to happen, and this can be made far worse when the person tells them something over which they have no control.  In the biography there are innumerable instances of people being told truly awful news by Jeane - they will die, their daughters will divorce, their businesses will fail, they will become terribly ill and nearly die, their partners will leave them or die, plane crashes, and so it goes on - a vast list of terrifying events predicted for people about which they could do nothing except worry.  This is almost sorceror level magic.  Prophesying to terrify.

She was able with very little effort to diagnose disease, but she made no attempts to learn how to heal or communicate with those who could help her heal, which is the logical and kind next step for any gifted person.  She just told the person or their relatives how sick they were!

And because of the very high profile she enjoyed her prophecies were well publicised, meaning that her prophecies could well have been self fulfilling.  She devoted a lot of energy to predicting political events - the defeat of Adlai Stevenson, the election of Eisenhower by a landslide, the election of Harry S Truman.  Given the exposure she enjoyed on TV and radio as well as the newspaper coverage, these are not prophecies they are attempts to directly influence the way politics moved.  Again this is almost sorceror level magic.

And she would claim prophecy when in reality it was quite likely influence.  For example, she might prophecy that a person would marry someone whose initials were say GR.  Of course from that moment on, whatever the person consciously thought they would be subconsciously searching for someone with initials GR.

There was a very distinct difference between Jeane’s visions and the ‘fortune telling’ she did with her crystal ball.  The crystal ball activity was pure inter composer communication, she largely fed back what people believed or thought or had seen.  There is even one instance where a high ranking security official visited her in a panic wondering where she had found out about the top secret information she gave out on the Ed Sullivan show; but as we can see from the observations, she mixed with the very high ranking in politics and government, she could obtain whatever she wanted from people’s minds.  It is noticeable that where people were wrong, she was wrong too – most of the prophecies at the end of the book [not included on the site]  now seem silly and in fact are totally wrong, this is not prophecy it is pure medium activity.

But her very few visions in which no crystal ball was used are fascinating, because they show she did have a gift which she never developed and never properly used to help people.

I have left out all her interpretations of the visions she had.  She never bothered to study eastern systems or symbol systems any more than she bothered to learn how to heal, so her interpretation is clouded by her belief systems which were very limited and narrow.  To her heaven was God and the virgin Mary, a very Catholic viewpoint [and a very narrow Catholic viewpoint at that] which all the observations on this site rather testify is not exactly correct!

I think that on a small number of occasions she was able to genuinely prophesy, these were her true visions which were often preceeded by a feeling that 'something was coming on' and which were also accompanied by a sense of divine love.

On far more occasions she was actually reading people's perceptions and as such it was inter composer communication not prophecy.  The majority of the so called prophecies in the book can be attributed to her reading the thoughts of politicians, security officials, scientists, and those in power and feeding the information they secretly believed back to them or others.  Dangerous stuff as it reinforces a belief that may not be true.  She predicted another war for example, so someone somewhere believed that another war was possible.  Her so called prophecy could have led to one.

On an almost equally larger number of occasions she was manipulating people's lives and may well have known it.

This one entry shows how very dangerous mediums can be when they are put in a position of influence, and the prevailing belief system puts their abilities down to some sort of access to privileged information. 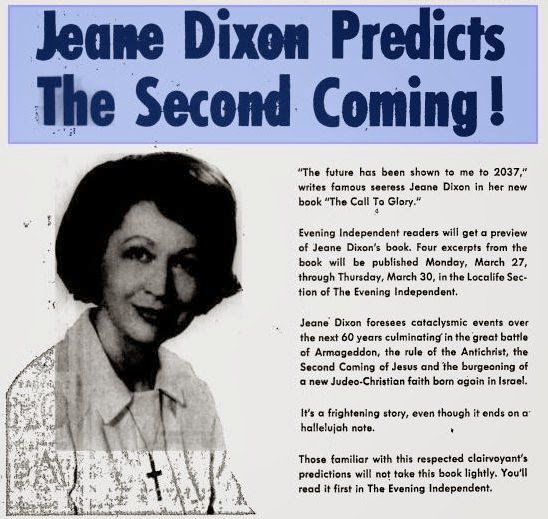 Dixon suffered a cardiac arrest and died at Sibley Memorial Hospital in Washington, D.C. on January 25, 1997.