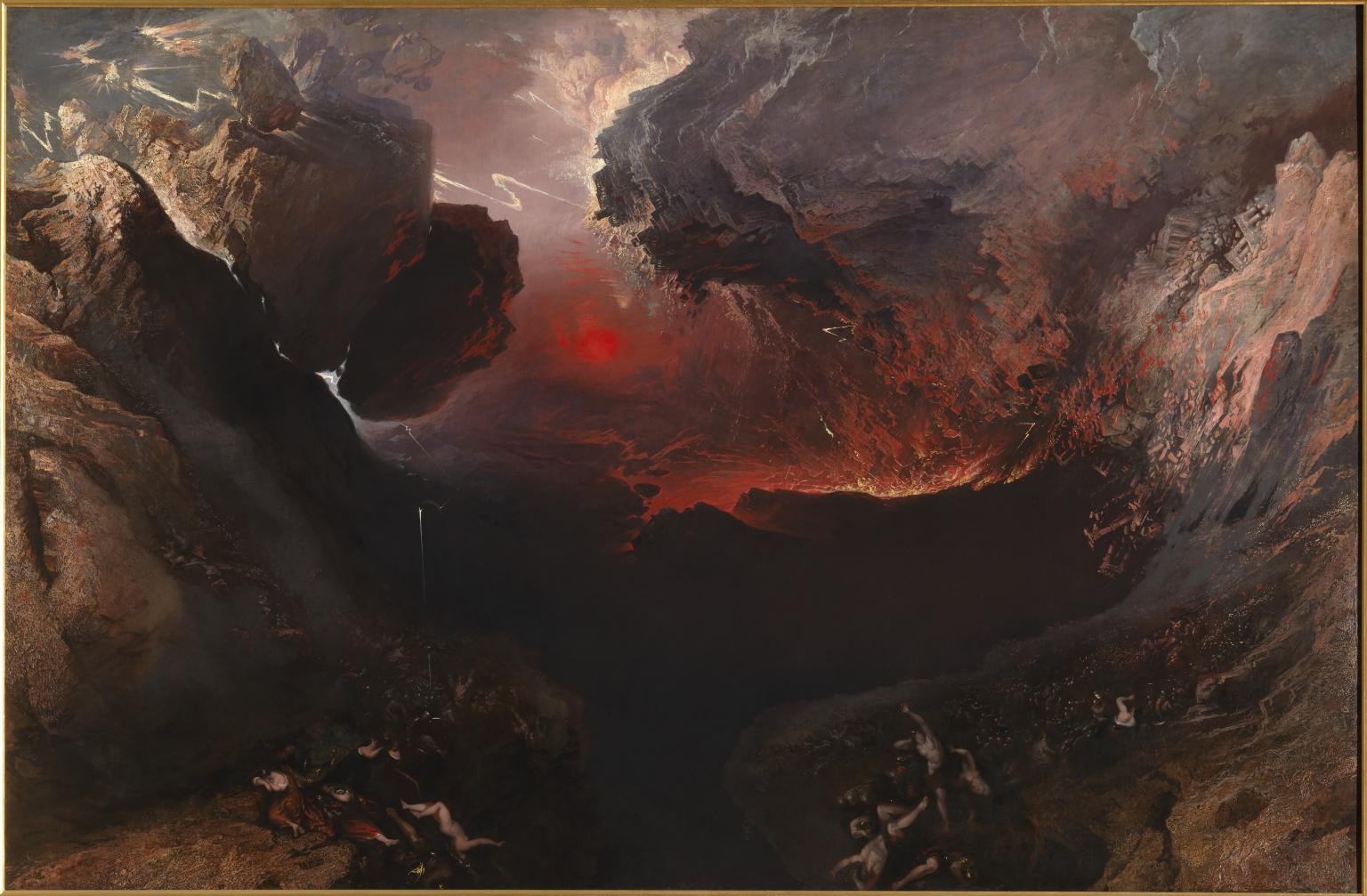 Strictly speaking, the word Apocalypse is the Greek term for a revelation or prophecy,

"Apocalypse" (ἀποκάλυψις) is a Greek word meaning an unveiling or unfolding of things not previously known and which could not be known apart from the unveiling".

but within most people’s understanding it has come to mean a revelation which describes the prophet’s visions of the end times – the end of the world, or the end of man or the end of an era – a particular cycle in history.  Because of its nature, this event is usually envisaged as one involving destruction or damage on a catastrophic scale.

Along with the idea of destruction, however, are often accompanying messages of hope – of wrongs made right, of comfort for the heart broken, and of justice done, often involving God, to indicate the sheer scale of the problem and the magnitude and level of destructive change that takes place as a solution, for example 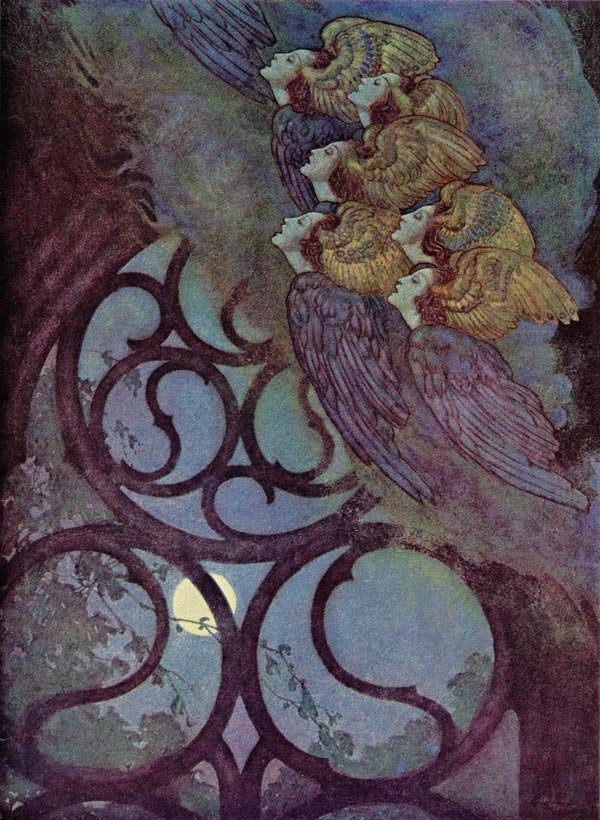 1. The Spirit of the Sovereign Lord is on me, because the Lord has anointed me to proclaim good news to the poor.   He has sent me to bind up the broken-hearted,  to proclaim freedom for the captives and release from darkness for the prisoners,

2 to proclaim the year of the Lord’s favour and the day of vengeance of our God, to comfort all who mourn,

3     and provide for those who grieve in Zion—to bestow on them a crown of beauty instead of ashes,  the oil of joy instead of mourning,  and a garment of praise instead of a spirit of despair.

It is essential to realise that this is not a purely Biblical phenomenon.

Although the fully apocalyptic visions in Daniel 7–12, as well as those in the New Testament’s Revelation are perhaps the best known examples, many others have had such visions – including George Washington the then President of the USA and Sir Arthur Conan Doyle, the writer and inventor of Sherlock Holmes

We have a number of other concepts on the site that are related to the idea of the apocalypse, each being an aspect of apocalyptic events

The observations have only been duplicated here if the apocalypse is specifically described, as opposed say to just the judgement etc. 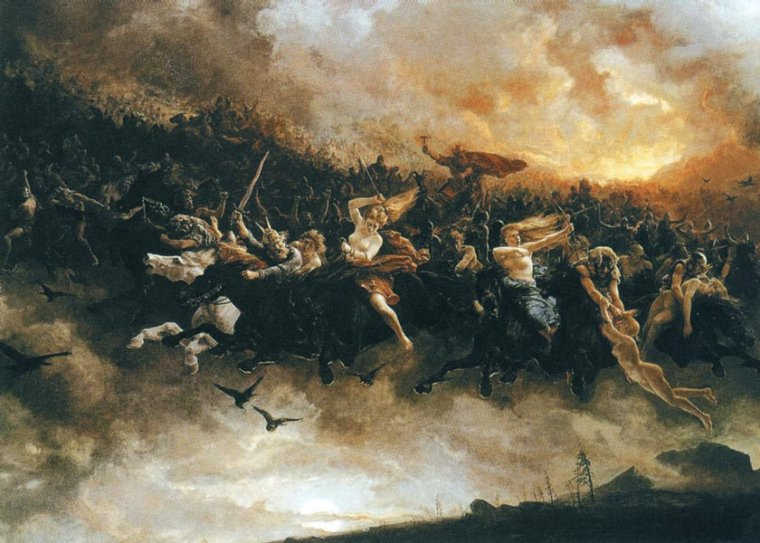 In Norse mythology, Ragnarök is the name given to the deaths of the many northern white races.  It is described in terms of a series of events, including a great battle, foretold to lead to the deaths of a number of the gods including  Odin, Thor, Týr, Freyr, Heimdallr and Loki.  The time will include natural disasters and the submersion of the world in water. Given the submersion of much of Europe via the Doggerbank disaster, it may be that this apocalypse has already occurred.  After these events, the myths predict that "the world will resurface anew and fertile, the surviving and returning gods will meet and the world will be repopulated". As Wikipedia says "Ragnarök is an important event in Norse mythology and has been the subject of scholarly discourse and theory in the history of Germanic studies".

The event is described in the Poetic Edda,  in a single poem and is referred to as Ragnarök or Ragnarøkkr (Old Norse for "Fate of the Gods" and "Twilight of the Gods", respectively).  The event was used by composer Richard Wagner in his Ring cycle.  And was the last of his Der Ring des Nibelungen operas, Götterdämmerung (1876), which is "Twilight of the Gods" in German.

Now I shall tell you of the days to come.
I shall tell you how it will end, and then how it will begin once more. These are dark days I will tell you of, dark days and hidden things, concerning the ends of the earth and the death of the gods. Listen, and you will learn.
This is how we will know that the end times are upon us. It will be far from the age of the gods, in the time of men. It will happen when the gods all sleep, every god but all-seeing Heimdall. He will watch everything as it begins, although he will be powerless to prevent what he sees from happening.
Neil Gaiman, in Norse Mythology (2017), Ragnarok: The Final Destiny of the Gods

The Three Ages of Buddhism

The Three Ages of Buddhism are three divisions of time following Buddha's passing and predict the decline and degeneration of the religion over time.  But although there have been attempts to allocate timescales to each period, there is actually no agreement on what the timescales are, we have seen figures ranging from 500 years to 2000 years! 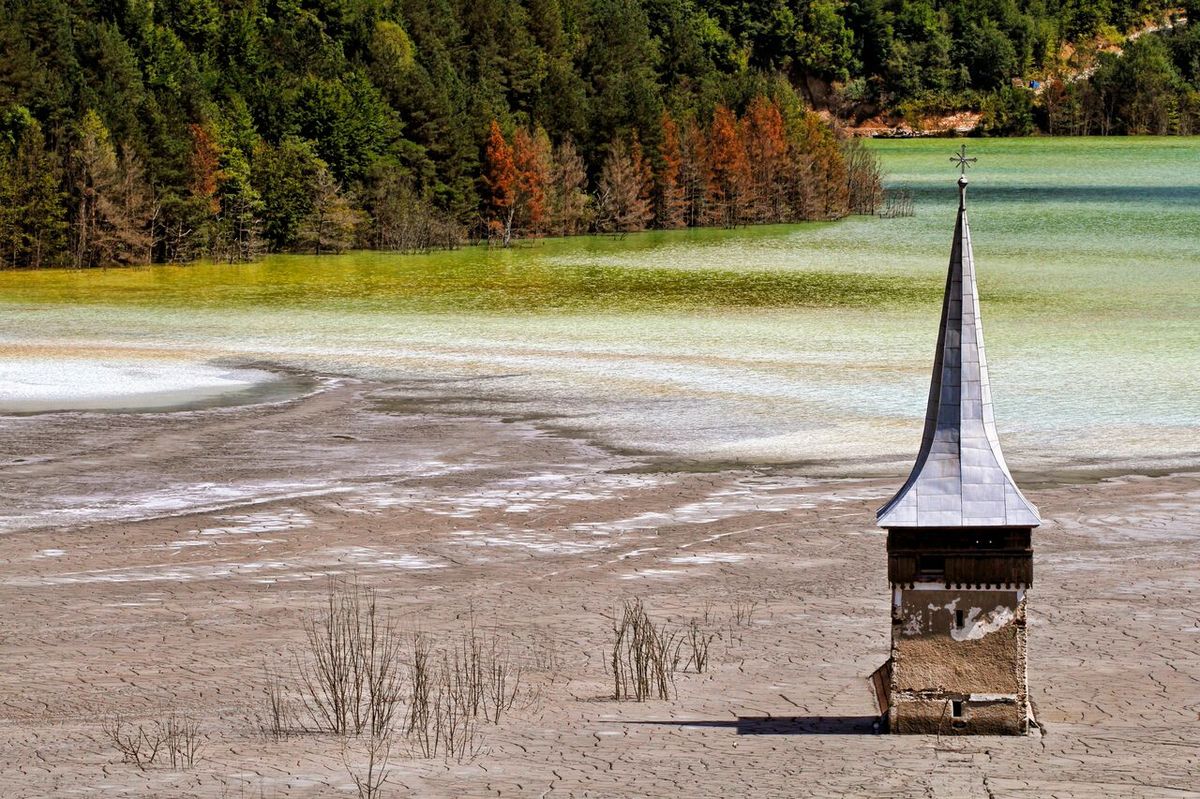 It is thus probably better to simply view the prophecy as it stands:

The three periods are significant to Mahayana adherents, particularly those who hold the Lotus Sutra in high regard, namely the Tiantai and Tendai and Nichiren Buddhism.
Using the observation we have of Buddha himself and extracting a small part we read that 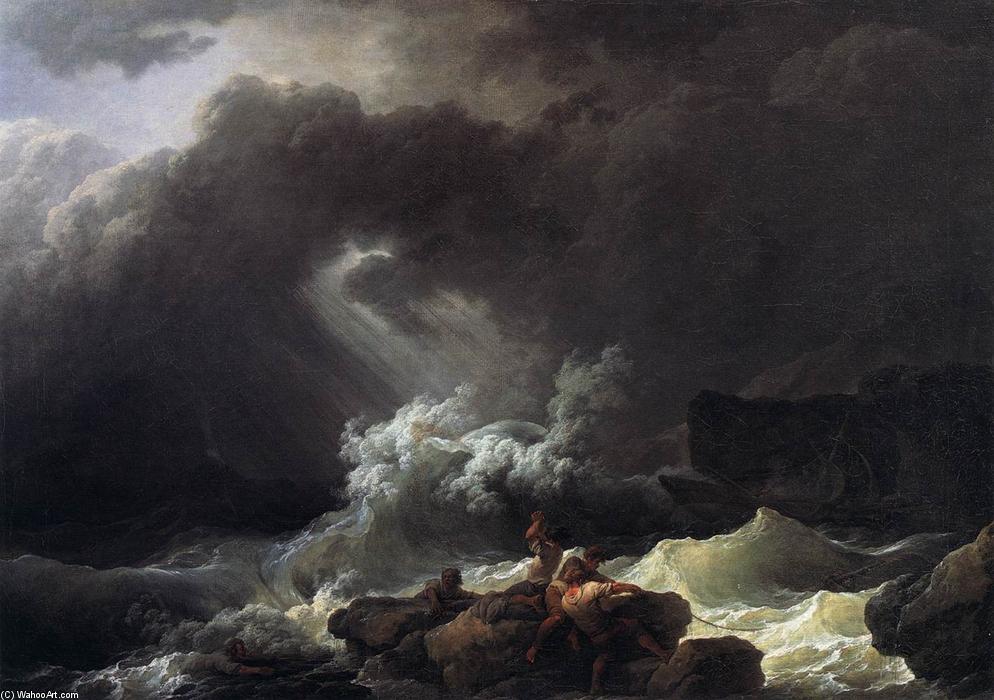 When the Dharma is about to perish, all the gods will begin to weep. Rivers will dry up and the five grains will not ripen. Pestilences will frequently take millions of lives.

The masses will toil and suffer while the local officials will plot and scheme. No one will adhere to principles.

Instead, the human race will multiply, becoming like the sands of the ocean-bed.
Good persons will be hard to find; .....

As the eon comes to a close, ...... the lifespan of people will decrease. Their hair will turn white by the time they are forty. Because of excessive licentious behavior they will quickly exhaust their seminal fluids and will die at a young age, usually before sixty years. As the lifespan of males decreases, that of females will increase to seventy, eighty, ninety, or one hundred years.

The mighty rivers will flood and lose harmony with their natural cycles, yet people will not take notice or feel concern. Extremes of climate will soon be taken for granted. Beings of all races will mix together at random, without regard for the noble and the mean. Their births and rebirths will cause them to sink and float, like feeding aquatic creatures.

Hindu astronomers calculated long ago that our sun revolves around another star ‘as its dual’ in a  24,000 year cycle which they then divide into eight  ‘yugas’ or ages [which are not of equal length]. They also observed that this dual system revolves around a ‘grand centre’ or the centre of the galaxy [which we now know to be a black hole], called the Vishnunabhi, and is the seat of creative power Brahma, ‘the universal magnetism’.  [Brahma can be roughly equated with God or the Ultimate Intelligence].

The Shaivites and as a consequence Hindus believe we are in the age of Kali Yuga, which means we are indeed in an apocalyptic age.   Taking the present Manvantara – Vaivasvata - of the seven ages we have had so far, we find that the four Yugas and their dates are:

The end, absolute end, of the Twilight of Kali Yuga is estimated to be …..  2,442AD [give or take a year or two – I jest].  The Twilight of the Kali Yuga therefore would have started in about 1939.  The last traces of this present humankind will have disappeared in 2,442.  So as I write this we have, as a species, about 426 years to go. 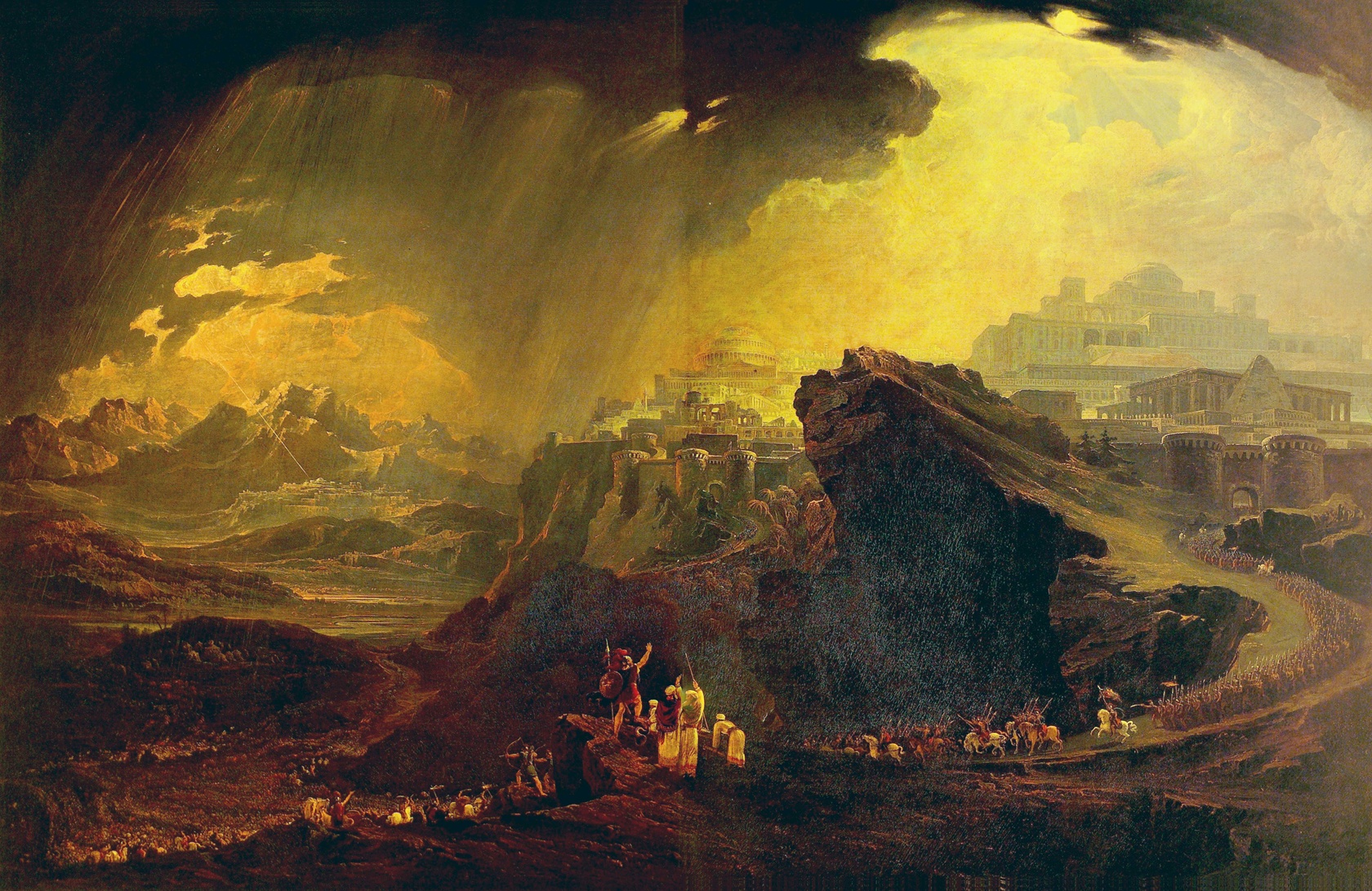 The Mayan calendar is an ancient calendar system that rose to fame in 2012, when a “Great Cycle” of its Long Count component came to an end.  Rather unfortunately, the media immediately jumped onto the bandwagon and said that this meant the world would end at 11:11 UTC on December 21, 2012. As we all know, it didn't.

The Mayan calendar dates back to at least the 5th century BCE and it is still in use in some Mayan communities today. However, even though the Mayans contributed to the further development of the calendar, they did not actually invent it. The same system was used by most cultures in pre-Columbian Central America—including those predating the Maya.

The Mayan Calendar consists of three separate corresponding calendars: the Long Count, the Tzolkin (divine calendar), and the Haab (civil calendar).  So it is only the first two that are of interest.

And what do we find if we compare with the Shaivite calendar?

Kali Yuga started about 3,606 BC, the age of conflict. In other words, the dates are really not that dissimilar for the start of this age, and there is every reason in a cycle of this length to expect some discepancies caused by the problems of conversion from the various systems.  The Mayan and Shaivite systems thus tend to agree, we are at the end of an apocalyptic era.

Not a matter of if, but when.