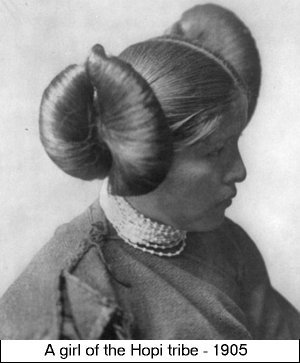 Hopi or Pueblo Indians belong to America's the most ancient population. They managed to keep amazing imaginations concerning the nature of our world, human predestination, previous civilisations of our planet and reasons of their downfall. From this point of view their tradition can be treated as the highest form of shamanism when daily magic and fight for survival give their place to devotion to spiritual goals, struggle for preservation and evolution of our planet's biosphere-noosphere.

The whole history of Hopi people is an evidence of undeviating observance of these high goals. For the first time I met the mentioning of Pueblo in books of K. Yung. He wrote of their belief that their rituals maintain the existence of our planet and if they will be interrupted Earth will die very soon. This philosophy penetrates the whole Hopi's existence and their life and daily functioning are subordinated to this messianic role.

In the beginning of 2000 in Arizona I was lucky to meet the spiritual leader of Spider Woman clan Martin Gashweseoma. Spider Woman is one of the highest Hopi goddesses, creator and keeper of all forms of life on Earth including human. Correspondingly, its clan is among the central ones in Hopi tradition. That is why the leader of this clan is to keep the ancient texts, tablets, which, according to the legend, were inherited from previous civilisations dwelling Earth before world cataclysms.

One of Hopi's main missions is to carry this knowledge, maintaining the continuity between civilisations. The central task of the initiation is to accustom to this sacral knowledge and the world of Gods and spirits helping to fulfil this mission.

It is important to stress that the texts contain the knowledge concerning not only past but also future including eventual downfall of earthy civilisation. According to Hopi we now dwell the fourth Earth, three previous ones were destroyed, for humanity forgot its mission and was stuck in chasing pleasures, fighting for power and nationalism. The saddest thing is that, according to these texts, we are now on the edge of the next fourth apocalypse.