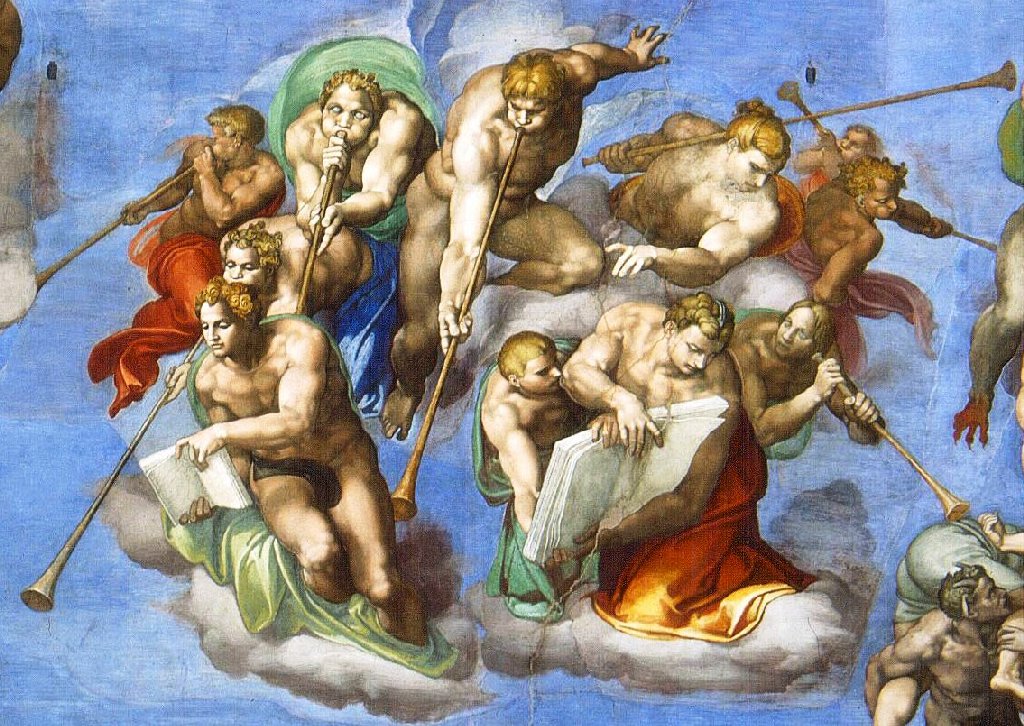 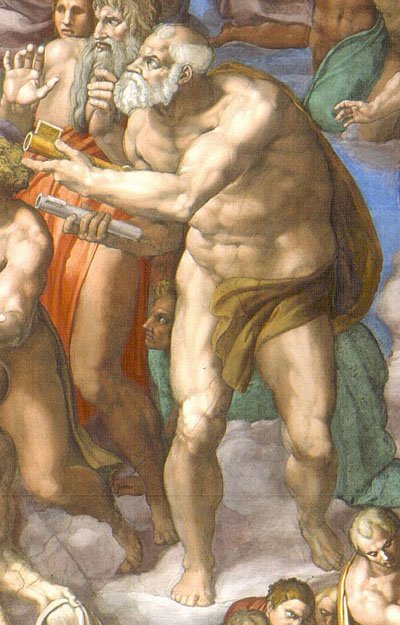 The cycle of ascent and descent

The fresco overall depicts Christ and his Judgement of the souls. Michelangelo portrayed Jesus surrounded by saints, among whom Saint Bartholomew holds a drooping flayed skin, St Peter holds the key of heaven’s gates. St Laurence has a gridiron, St Catherine of Alexandria is seen with the cogwheel and St Sebastian kneels holding the arrows.

Virgin - Next to Christ is ‘the Virgin’, who turns her head in a gesture of resignation: in fact she can no longer intervene in the decision, but only await the result of the Judgement.  The symbolism here is interesting as the feminine is usually seen as the means by which man can achieve salvation, but at this stage, she can no longer intervene. 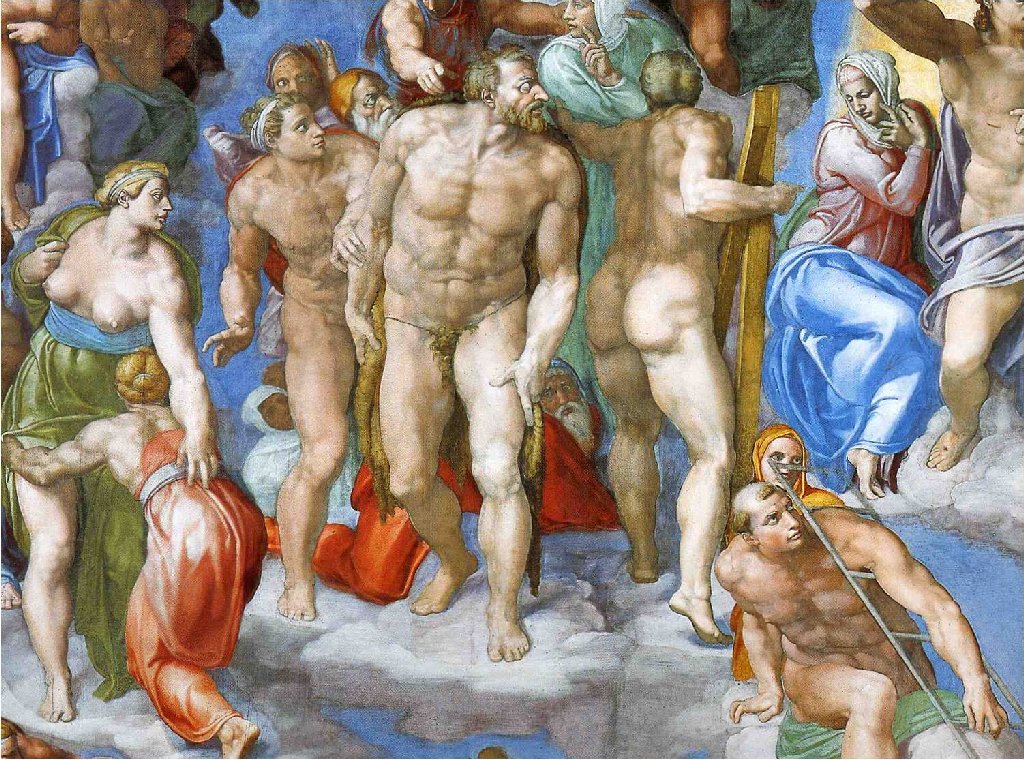 Trumpets - In the centre of the lower section are the angels of the Apocalypse who are wakening the dead to the sound of long trumpets. Trumpets are symbolic, however, this aspect is not explored. 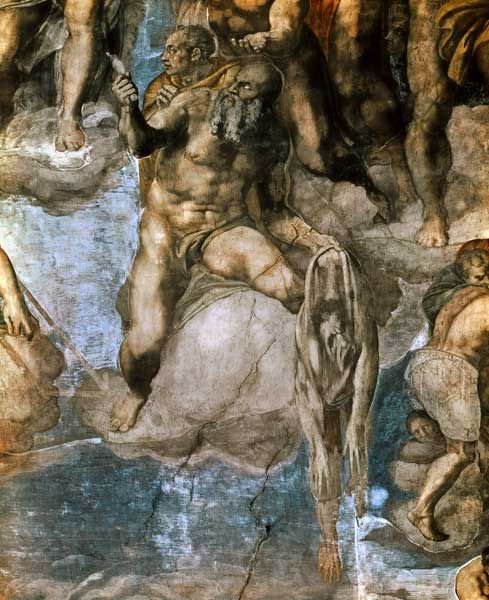 If one is a Christian without any mystic understanding, one is told that there is no reincarnation and that there will be a ‘judgement day’ – just the one – when everyone will be woken up from their graves by a trumpet and then be judged.

But this can also be read mystically.  That the painting depicts the cycle of reincarnation.  That those who have achieved their destiny and reached a point on the spiritual path where they have been annihilated, are judged to have no need to cycle back and reincarnate again, whereas those who have been judged wanting are sent back down to earth – hell.  As indeed it was at the time for most people of this age.

An interesting allusion to Classicism is added by the boat carrying arriving newly dead souls – with the ferryman – a nod to Charon and the concept of the ferry.  It also tends to reinforce this notion of a cycle as opposed to a single event.

Michelangelo was a great admirer of Dante and even wrote sonnets in his praise.  The reference in to the Inferno of Dante Alighieri's Divina Commedia is clear. 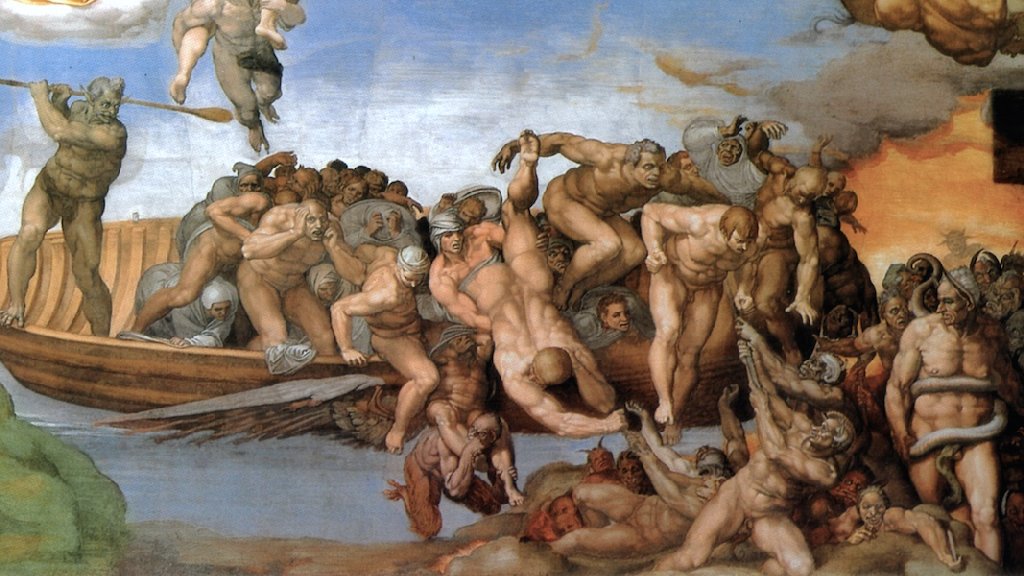