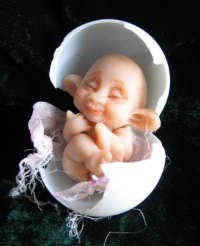 Medically a premature baby is defined as the birth of a baby less than 37 weeks gestational age. What marks out premature babies is that they are, of course, smaller than full term babies, but many are born without their organs having had enough time to fully develop.  Some of these babies show obvious disabilities, some have less obvious problems that only surface later.  Even with considerable medical care the organs may never fully develop even though the baby survives.

Several organ systems mature between 34 and 37 weeks, so any baby born before this time or during this time is going to have at least one of their organs not fully developed.  One of the main organs greatly affected by premature birth is the lungs. The lungs are one of the last organs to mature in the womb; because of this, many premature babies spend the first days/weeks of their life on a ventilator.

With improved health care, more and more very premature babies are being 'saved'.  Babies as young as 24 weeks old have been nursed to survive and there are even some cases of babies as tiny as 21 weeks being 'saved'.  But of course babies this tiny really do have few organs properly developed and external care never fully matches the growing conditions of the womb.  In all cases there is the risk of brain damage, but the risk increases significantly as the age of the baby decreases.  As Wikipedia says “there are ethical controversies over the aggressiveness of the care rendered to such infants”.

Wikipedia lists a whole host of terrifying neurological problems that can result from being premature.

Due to the order in which the brain develops, a premature baby is more likely to have 'white matter' 'brain abnormalities.  This is the area of Memory, and thus intellect, thus a child with these areas damaged may exhibit signs similar to autism or savantism, or the damage may be far worse and severe learning difficulties of all sorts – language, behavioural, and so on may result.

But what seems clear is that very occasionally by a strange fluke of fate or Destiny, just the right amount of 'brain damage' is done and the child becomes a genius in touch with the spiritual world on a permanent basis.

The autistic savant Derek Paravicini, for example, was born at 25 weeks. The oxygen therapy given during his time in a neonatal intensive care unit rendered him blind and affected his developing brain, resulting in Paravicini developing autism. However, he also has absolute pitch and highly developed musical abilities.

Occasionally if not a genius they become 'psychic' like Joe McMoneagle.

All these geniuses and psychically gifted people will spend their whole lives battling illness.

Cardiovascular complications are common due to the failure of the ductus arteriosus to close after birth.  Respiratory problems are common, due to the malformation of the lungs and there may be chronic lung disease.  Gastrointestinal and metabolic problems can occur, hypoglycemia, hernias and anaemia, even jaundice.  And they will suffer from endless infections because their immune system is not fully functional, anything from sepsis to pneumonia, and urinary tract infection.  A large study on children born between 22 and 25 weeks who were currently at school age found that 46 percent had severe or moderate disabilities such as cerebral palsy, vision or hearing loss and learning problems. 34 percent were mildly disabled and 20 percent had no obvious disabilities, while 12 percent had disabling cerebral palsy.

There is in reality no treatment for prematurity.  The only true treatment is to avoid the causes listed below.  But the medical profession seem to be intent on interfering here and these poor little souls have not been helped in recent times by the inadvisable use of pharmaceuticals by doctors.

Women at risk from premature birth are routinely given [in the USA at least] Antibiotics, NSAIDs, magnesium sulfate, Calcium channel blockers, beta mimetics, atosiban, corticosteroids,  oxytocin antagonists, and beta2-agonist drugs.  This terrifying list occasionally serves to prevent premature delivery, but it often does untold harm to the baby.  For instance, clinical research conducted in 2004 has shown that the postnatal administration of dexamethasone led to permanent neuromotor and cognitive deficits. In addition, a recent large scale study has found that a second “rescue” dose of betamethasone prenatally led to decreased weight, length, and head circumference.   The side effects of the corticosteroids were diabetes mellitus, osteoporosis, inhibition of growth, hypertension, cognitive problems, anxiety, depression, gastritis, and colitis. One study showed that a single exposure to these same drugs during brain development caused rapid brain degeneration.

There are a huge number of things which can cause premature birth.  Poor diet and nutrition; stress, anxiety or depression; lack of adequate rest and sleep on the part of the mother play a part.

Premature birth and other adverse outcomes, including death, are higher among abused pregnant women than among non-abused women.

The EUROPOP study showed that premature birth is related to prolonged work (over 42 hours per week) or prolonged standing (over 6 hours per day).  Also, night work has been linked to preterm birth.

Pregnancy interval makes a difference as women with a 6 months span or less between pregnancies have a two-fold increase in premature birth and birth abnormalities in general.

Environmental toxins – heavy metals, pesticides, pollution have an effect.  Then there are pharmaceuticals as we have seen above.  Viruses can have an impact as well as parasites.  Bacterial vaginosis before or during pregnancy can cause premature births as can a host of other bacterial infections.  Even periodontal disease has been shown to be linked to preterm birth.

Multiple pregnancies (twins, triplets, etc.) are a significant factor in premature birth and in problems with development in general.  The March of Dimes Multicenter Prematurity and Prevention Study found that 54% of twins were delivered prematurely.  Triplets are even more endangered. The use of fertility medication that stimulates the ovary to release multiple eggs and of IVF with embryo transfer of multiple embryos "has been implicated as an important factor in premature birth".

And then of course there is the old mother.

Finally, the use of tobacco, cocaine [and other drugs], and excessive alcohol during pregnancy also increases the chance of premature delivery.

Avoid this lot and you stand a better chance of going full term.

Studies of people born premature and investigated later with MRI brain imaging, demonstrate qualitative anomalies of brain structure and grey matter 'deficits' within temporal lobe structures and the cerebellum that persist into adolescence.

In effect, the principal contributor to spiritual experience  is brain damage which sounds extremely upsetting, until one realises what opportunities it opens up for those whose Intellect is not drowning spiritual input.