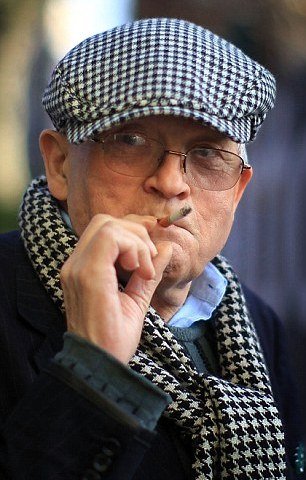 He is considered one of the most influential British artists of the 20th century.  From the point of view of this site, his paintings alone would merit him a significant place, but he is of especial interest because he is a synaesthete.  Hockney sees colours to musical stimuli, which means he was born with a ‘special brain’.

The beautiful lush, rich colours he uses in his later paintings and the stage sets he has designed for various ballets and operas, are a testament to this ‘gift’.  His stage sets in particular are a reflection of his own ‘seen’ colours while listening to the music of the theatre piece.

At the time he began painting, acrylics appeared on the scene and David changed from oil to acrylics.  Good acrylic paint has a vibrant brilliancy of colour and dries very quickly meaning it can be applied thickly to create either texture and movement or great depth of colour – jewel brilliance.  Oils have a more subtle sheen, but oils take ages to dry and can only ever be ‘flat’.  Acrylic paintings can be almost hallway between a sculpture and a painting, as such at the time David was studying, the art world was a very exciting place to be – opening up a world of new possibilities. 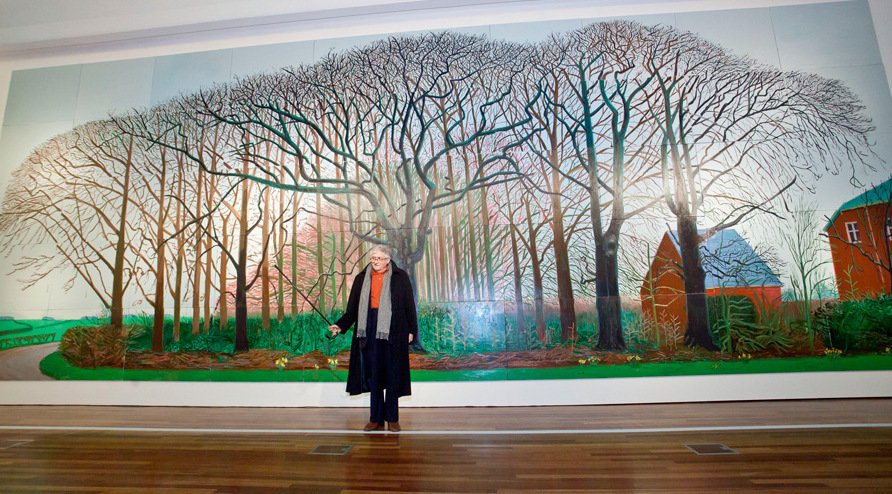 David is probably best known for the series of acrylic paintings of swimming pools he did in the 1970s; the stunningly beautiful and very large paintings he has been producing in his latter years of his native Yorkshire and the surrounding area; his glorious stage designs for the Royal Court Theatre, Glyndebourne, La Scala and the Metropolitan Opera in New York City; and his portraits of his relatives, friends and lovers nearly all near life size, which he imbues with a great sense of humanity. 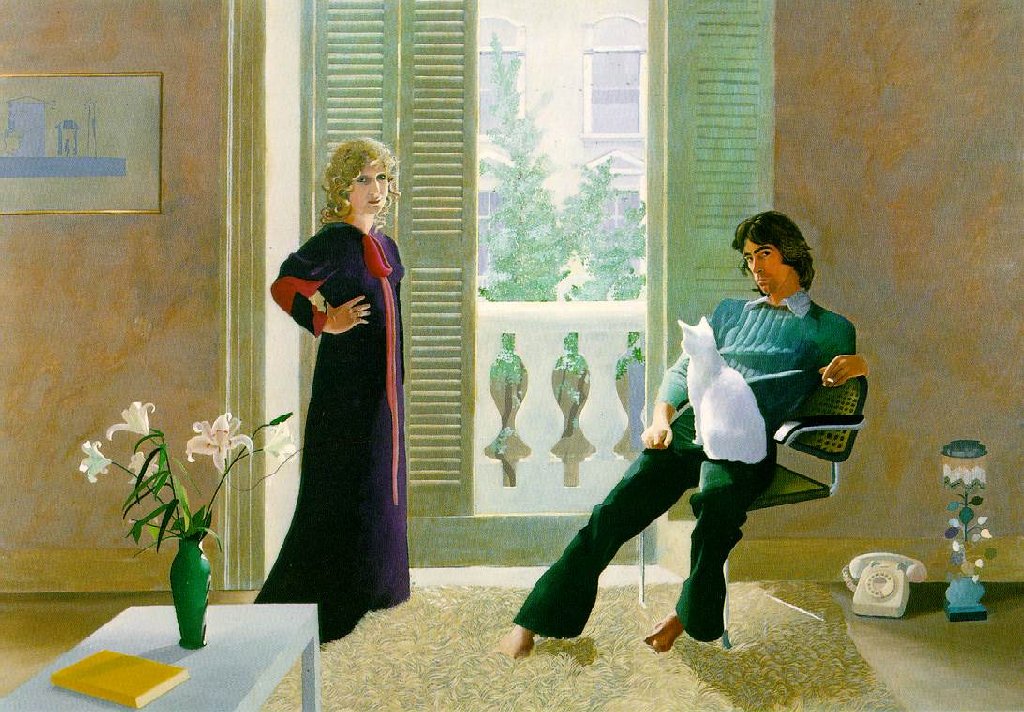 David is also known for his very innovative work. 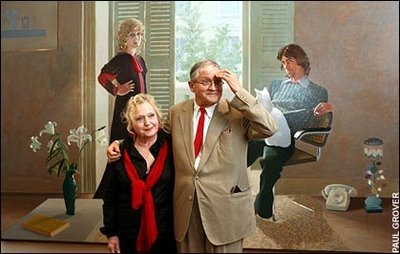 In the early 1980s, for example, he began to produce photo collages, which he called "joiners", first using Polaroid prints and subsequently 35mm, commercially-processed colour prints.

He has also painted hundreds of portraits, still lifes and landscapes using the Brushes iPhone and iPad application, the ‘Fresh-Flowers’ exhibition in 2011 featured more than 100 of his drawings on 25 iPads and 20 iPods.  But after experimenting and exploring these mediums, he always comes back to paint:

We think that the photograph is the ultimate reality, but it isn’t because the camera sees geometrically.  We don’t.  We see partly geometrically but also psychologically.  If I glance at the picture of Brahms on the wall over there, the moment I do he becomes larger than the door.  So measuring the world in a geometrical way is not that true. 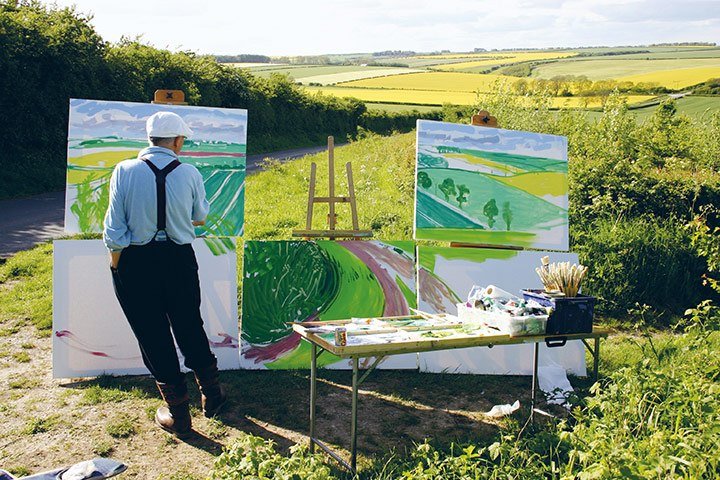 Hockney returned more frequently to Yorkshire in the 1990s, to visit his mother who died in 1999.

In 1997, his friend Jonathan Silver, who was terminally ill, encouraged him to capture the local surroundings.

Hockney returned to Yorkshire for longer and longer stays, and by 2005 was painting the countryside en plein air.  The resulting paintings are enormous - made of multiple smaller canvases—nine, 15 or more—placed together. To help him visualize work at that scale, each day's work is photographed, and taken home to study.  In June 2007, Hockney's largest painting, Bigger Trees Near Warter, which measures 15 feet by 40 feet, was hung in the Royal Academy's largest gallery in its annual Summer Exhibition.  It was painted on 50 individual canvases, mostly working in situ, over five weeks.  He donated it to the Tate Gallery in London, saying: 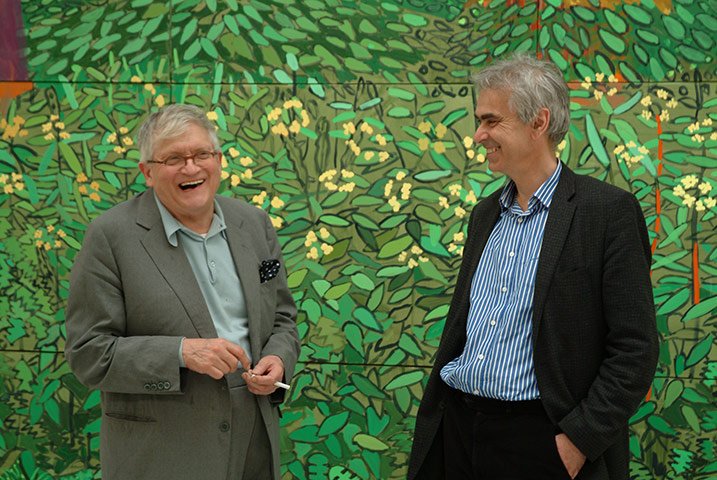 David with his friend Martin Gayford

I thought if I'm going to give something to the Tate I want to give them something really good.

It's going to be here for a while.

I don't want to give things I'm not too proud of ... I thought this was a good painting because it's of England ... it seems like a good thing to do.

Nature and the love of Nature is a continual theme in David's works, he both respects Nature and derives great inspiration from it.  In 2009, for example, the exhibition  "David Hockney: Just Nature" attracted some 100,000 visitors at the Kunsthalle Würth in Schwäbisch Hall, Germany.  He said this about the area around where he now lives and paints: 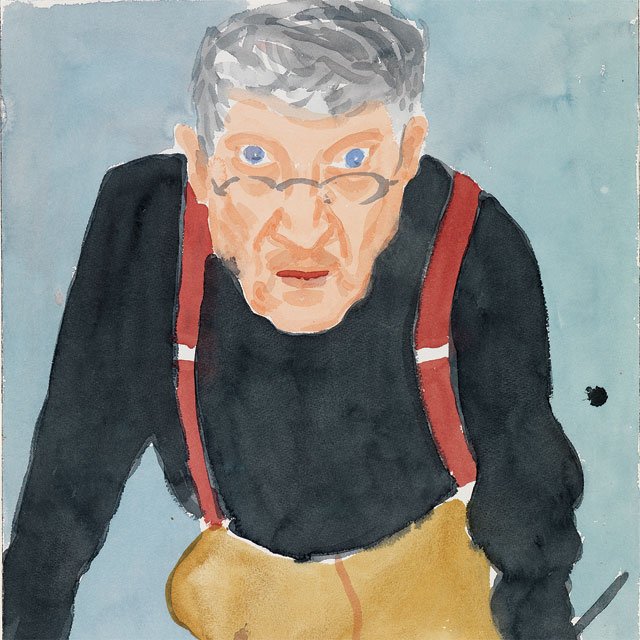 Self portrait with red braces

I’ve always loved this part of the world, and I’ve known it for a long time. In my early teenage years I worked on a farm here … it was a place where you could get a job in the holidays. So I came and stooked corn in the early 1950s. I cycled around, and I discovered it was rather beautiful. Most people don’t realize that, because even if you drive to Bridlington from West Yorkshire you think it consists of just a few fields. The Wolds are rolling chalk hills. No one ever comes off the main road. If you do, you’re the only car around. You almost never see another one, just occasional agricultural vehicles. I can take out large canvases, never meet anyone. Once in a while a farmer comes to talk and look. The whole of East Yorkshire is fairly deserted. Except for Hull, there’s no big city. Beverley is the county town; Bridlington is on the road to nowhere, meaning you’ve got to aim to come here. So I can paint here totally undisturbed.  I enjoy this little bit of England very much. 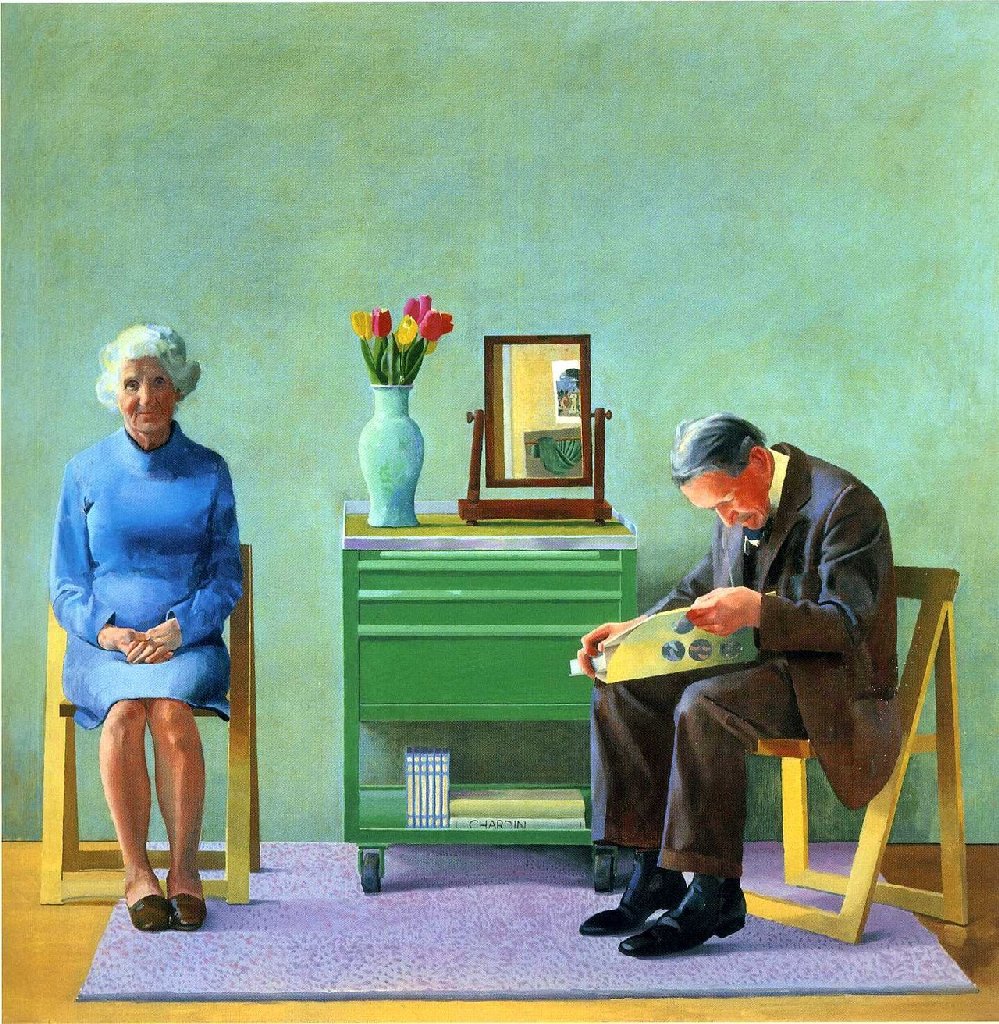 Hockney was born in Bradford, England.

He was educated at Bradford Grammar School, Bradford College of Art and the Royal College of Art in London, where Hockney said he felt at home and took pride in his work. The RCA said it would not let him graduate in 1962, when he refused to write an essay required for the final examination, saying he should be assessed solely on his artworks. Recognising his talent and growing reputation, the RCA changed its regulations and awarded the diploma. 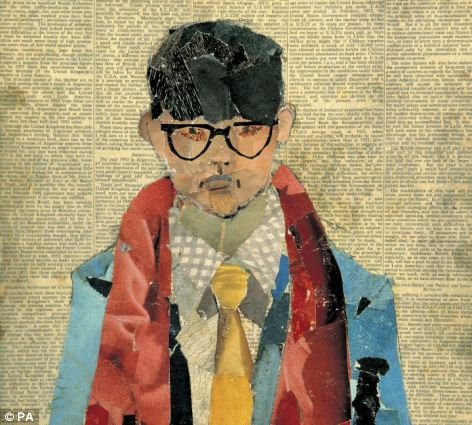 Hockney is openly gay, and unlike Andy Warhol, whom he befriended, he explored the nature of gay love in his portraiture.  At the time he was running considerable risk.

It was not until the introduction of the Sexual Offences Act in 1967, when Hockney was 30, that homosexual acts ”between two men over 21 years of age in private in England and Wales” were decriminalised.  Given that one’s sexuality tends to be ‘God given’ – the law was clearly an ass, but Hockney’s paintings probably helped in showing just what an ass it was on this issue.

I have used some of David's drawings on this theme as illustrations for the poetry of C P Cavafy. 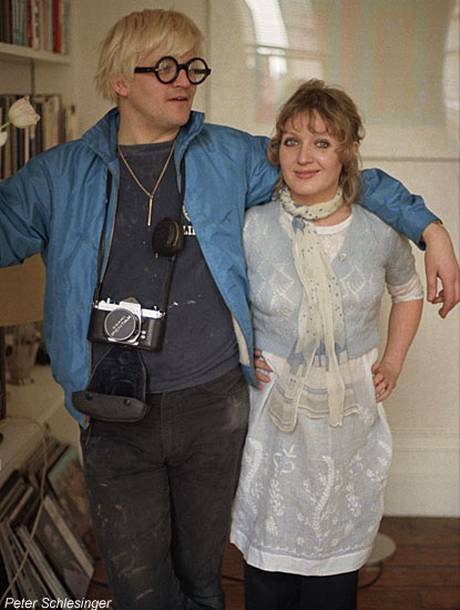 Thus his early paintings were for their day, quite confrontational, and one might have thought that his sexuality should have - at that time - generated considerable angst.  But, interestingly, angst is not at all visible in his paintings – he was no Bacon – there is a placidity that oozes from all his paintings.  Hockney is a man at peace with himself and who he is.  Nevertheless, he moved to Los Angeles in 1964, and only returned to London in 1968 [after the Act was passed].

Hockney has also had his share of grief.  On the morning of 18 March 2013, for example, Hockney's 23-year-old assistant, Dominic Elliott, died as a result of drugs, drinking acid and alcohol at Hockney's Bridlington studio. Elliott was a first- and second-team player for Bridlington rugby club. It was reported that Hockney's partner drove Elliott to Scarborough General Hospital where he later died.  But grief is not reflected in David’s paintings.  The emotion that emanates the most is love – love for his fellow creatures, the countryside, his heritage – just love. 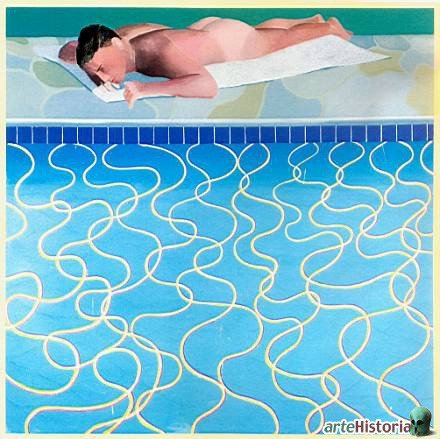 The overwhelming sense one gets of David is of a very likeable, humble, simple man, who loves nature, life, his friends and companions.

A person whose greatest love is art.

And through art he is a happy man.  Interestingly although David is a rich man, he does not live for money, nor does money interest him – it is a means to an end – the chance to buy more paint!  In 2012, Hockney was worth ‘an estimated £36.1 million’.  Since then, he has transferred paintings valued at £81.5m to the David Hockney Foundation, and given around £0.79m in cash to help fund the foundation's operations. The artist plans to give away his paintings, through the foundation, to galleries including the Tate in London.

I am greedy for an exciting life. I want it to be exciting all the time and I get it, actually… I can find excitement, I admit, in raindrops falling on a puddle and a lot of people wouldn’t

In the observations, I have combined David’s paintings with a number of very beautiful and gentle Chinese poems.  The poems somehow seem to reflect David’s work well and who he is, whilst at the same time, David himself has stated his interest in the Chinese culture. 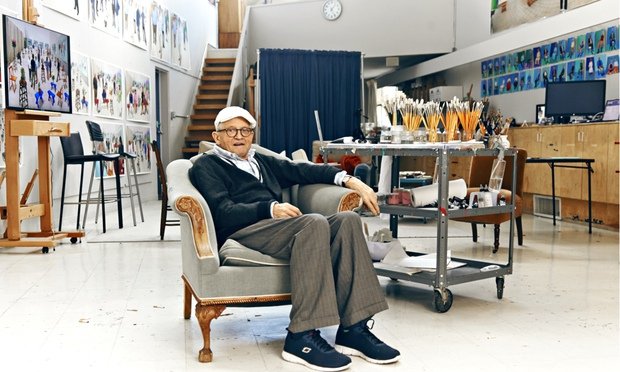 I used watercolour because I wanted a flow from my hand, partly because of what I had learned of the Chinese attitude to painting.

They say you need three things for paintings: the hand, the eye, and the heart.

A good eye and heart is not enough; neither is a good hand and eye.  I thought that was very, very good. 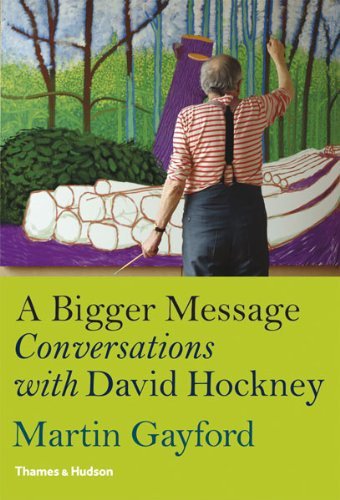 David has also written quite a large number of books including: 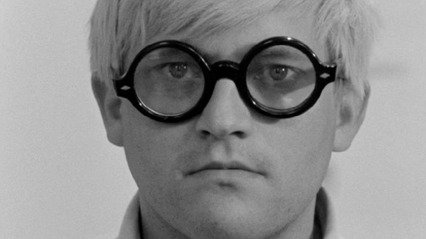