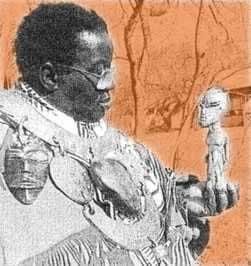 Vusamazulu Credo Mutwa (born 1921 in KwaZulu-Natal, Colony of Natal) is a Zulu Sangoma and Sanusi from South Africa.

His father was a former Catholic catechist from the district of Embo in the south of Natal.  His mother was the daughter of Ziko Shezi, an Induna and veteran of the battle of Ulundi, which ended the Zulu War. Ziko was also a high ranking Witch doctor and a custodian of the relics of their tribe and Guardian of the Tribe's History.

His parents never married and his mother, classified as a 'heathen', refused to be converted to Christianity.  The disagreement resulted in his parents parting just after he was born and Credo grew up under the protection of his grandfather.

The consequence was that he became his grandfather’s helper in his practise as a witch doctor [witch doctors are good, sorcerors are not]. He accompanied him on his visits, his medicine bags for him and gradually started to learn some of the secrets of being a witch doctor.

In 1928 [aged 7] , Credo was taken by his father to live with him.   Credo was considered a disgrace to his grandfather’s family because he was illegitimate and his grandfather gave his permission for him to go, despite his mother's protests. 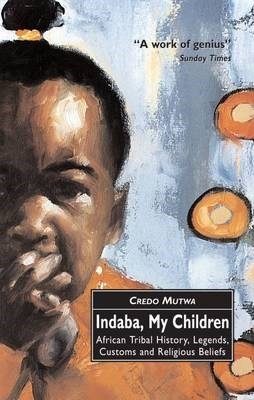 His father and stepmother, and their other three children went to the Transvaal, where his father became a labourer on a farm.   In 1932 [aged only 11] Credo’s stepbrother Emmanuel died after being whipped by the farmer who was his father's employer.

And so his story could have ended here for he later found employment in Johannesburg in a leading curio shop, specialising in African art.

But in 1958 [aged 37], he visited his mother and grandfather in Zululand after more than 30 years away and at their command, renounced Christianity and underwent the 'Ceremony of Purification' in order to begin training as a witch doctor and prepare to take on the post of Custodian of the sacred Tribal Relics, in the event of his grandfather's death.

Some of what he learnt and the experiences he had over those and subsequent years are documented in a series of extremely fine books.  Credo completed his training as a medicine man with a series of rebirth experiences and visions that make for both gripping and compelling reading.  The tragedies, however, did not end…

In March 1960, a young Basuto woman whom I loved, and hoped to wed in place of my present faithless spouse, was among those who died when police fired on the crowd at Sharpeville, near Vereeniging.  On the night before she was to be buried her parents, her brother and two sisters, and three of their children, cut off tufts of their hair and threw them into her still open coffin, swearing to avenge her if it took them a million years, even if they should die in doing so. I took what is called a 'Chiefs Great Blood Oath', cutting a vein in my hand (the left one) and letting ten drops of blood flow into one of the gaping bullet wounds.

And it was this terrible event that propelled Credo onto the path of being a writer, his hope being that he would be able to explain African, and particularly Bantu, history and culture and promote a better level of understanding and awareness of his people.

His objective was not revenge, but as a peace maker, a person who hoped through communication to stop the killing and prevent more bloodshed.

In the agony of the bereavement we felt, I swore to do this, come imprisonment, torture or death, and even if the very fires of Hell or the cold of Eternal Darkness stood in my way.  This … is only the beginning of the fulfilment of my oath, an oath whose keeping has become the only purpose of my intolerable life, and which will still be binding on my children and their children's children. So, even if this manuscript is destroyed, I shall write other works like it until one of them does get published  - be it after my death.