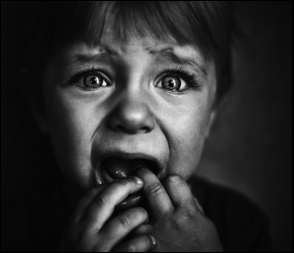 A night terror, also known as a sleep terror, incubus attack, or pavor nocturnus, is defined by the medical profession as “a  parasomnia disorder that predominantly affects children, causing  feelings of terror or dread, typically occurring in the first few hours of sleep”. Night terrors are not nightmares, which are simply bad dreams. There are other symptoms of night terrors that make them somewhat different – more in a moment.

The medical profession defines them as ‘sleep disorders’  - despite the fact that it is generally accepted that children with these terrors are not in reality 'asleep' - and frequently [though not always] suggests medication for the ‘disorder’ – a situation which we shall see is utterly disastrous and wholly wrong.  The following quote is not atypical: 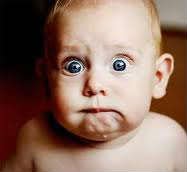 “If the night terrors are frequent, the sufferer should be awakened from sleep just before the time when the terrors occur most to interrupt the sleep cycle. In many cases, a child who has a night terror only needs comfort and reassurance. Psychotherapy or counseling may be appropriate in some cases. Benzodiazepine medications (such as diazepam) used at bedtime will often reduce night terrors” 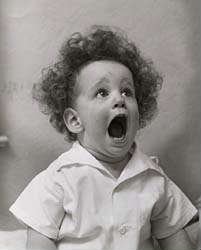 If you read the truly terrifying information on Benzodiazepines [which are addictive] you will realise that whatever the ‘solution’ – if solution is needed at all – drugs and psychoanalysts are not what is needed.

So called night terrors typically occur in children between the ages of two or three up to as late as twelve years, but they can even be experienced by adolescents and adults.  Estimates of how many children have these experiences vary -  in some cases figures quoted indicate that about one to six percent of children experience night terrors. Some studies put the figure as high as 15%.  Boys and girls of all backgrounds are affected equally.

A night terror is actually an out of body experience which is obtained slightly before going to sleep.  It is thus not a form of sleep but an out of body state brought on by the total Relaxation occasioned by being in bed in a warm and tired state just before sleep.

What appears to be clear from all the medical literature on this subject is that few medical people have heard of out of body experiences, which is why they do not understand what is happening.  The out-of-body experiences of children are often misinterpreted as night terrors by parents and doctors who are unaware of the out-of-body process.

Out of body experiences can be accompanied by some fairly alarming symptoms.  There may be unusual and often startling phenomena, such as loud sounds  - buzzing, humming, knocking etc strange bodily separation effects, an apparent ability to perform otherwise normally impossible monoevres, - and occasionally paralysis, that may create an overwhelming surge of fear and anxiety - especially in a young child. The extreme fear that may arise from the vibrational state can be intense.

In some cases the paralysis that accompanies out of body states is diagnosed as a seizure.  Some adults unaware of OBE states even refer to their vibrational experiences as suspected seizures.  And they seek medication – which is truly a mistake.

Children who have night terrors are usually described as 'bolting upright' with their eyes wide open, and a look of fear and panic. They will often scream. Further, they will usually sweat, breathe fast and have a rapid heart.

Remember children are awake during a so called night terror.

Not surprisingly, because they are fully conscious and their little spirit has left their body with no explanation, some of them think they have died, most are confused, some can be inconsolable, and some will be in a state of total panic.

Ask a doctor what causes night terrors and he will say in a confident way,

“ah yes [and here I quote a real example]  there can be a multitude of triggers, emotional stress during the previous day and a high fever are thought to precipitate many  episodes. Lack of sleep can be a problem and poor diet – do you give him adequate fruit and vegetables?   These night terrors can occur each night if the sufferer does not eat a proper diet, get the appropriate amount or quality of sleep or is enduring stressful events in his or her life. There is no scientific evidence of a link between night terrors and mental illness, but there is some evidence of a link between night terrors and hypoglycemia.  Some terror sufferers have many of the characteristics of depressed individuals including inhibition of aggression, self-directed anger, passivity, anxiety, impaired memory, and the ability to ignore pain”.

We now know that many out-of-body experiences occur in childhood between the ages of four and twelve. These experiences are spontaneous and often take place in the early stages of sleep. Even though each child is an individual and perceives the experience from a unique viewpoint, some commonalities are clear. Conscious out-of-body experiences in four--to-six-year-olds are generally simple and involve flying or floating in a safe environment. As a child becomes older, the experiences become more sophisticated and may include visitations and meetings with spiritual friends and relatives who have passed on.

They may then progress to  spiritually meaningful events taking place in teaching environments or ‘classrooms’ - some children use the term ‘heaven school’, a place where they encounter a "nice teacher".

Those who have had a positive out-of-body experience as a child often state that it has had a significant influence on their spiritual outlook as an adult. They usually appear to be more inquisitive and open to alternative methods of seeking the truth of their spiritual natures.

A child who has a ‘night terror’ is a gifted child.

They should never ever be sent to a psychoanalyst or given drugs.

All that needs to happen is that it is explained that they are lucky enough to be able to ‘meet with the angels’ as well as do lots of other exciting things like fly like Peter Pan and meet fairies or see other worlds.  They may also have the chance to see what they were in a past life.

William Buhlman – The Secret of the Soul
Parental support and involvement may be the most critical part of a child's spiritual development. When a child talks to a parent about an out-of-body experience or the vibrational state, the parent must decide how to assist the child. This is why parents should be aware of the phenomena associated with out-of-body experiences. In the past, most parents did not understand the natural process of out-of-body travel and attributed such experiences to dreams and nightmares.
If parents want to help their children stop the experience, they need only instruct them to focus their attention on a physical part of the body such as a finger or toe, to end the experience. To develop children's natural ability, encourage them to talk about their experience. Explain the process to them, and emphasize the naturalness of the experience. Educate children about the potential of their explorations and the spiritual aspects of out-of-body travel. If children are frightened, teach them what I call the Golden Blanket Technique. Many find it helpful to teach children to ask for assistance from a guardian angel, guide, or other protective being

William Buhlman – The Secret of the Soul
Another option is to teach children to use the vibrations and sounds to explore beyond their physical limits. You can do this by instructing them to remain calm during such states and allow the vibrations to expand and spread throughout their entire being. They are then to surrender to the sensations and sounds of the vibrational state as they focus and maintain their complete attention away from their body.  At that point they will begin to separate from the body and their adventure begins. Children are naturally gifted at spiritual exploration and proper instruction only enhances the gift

Parents can use this technique with their younger children.  Tell children that anytime they feel threatened or afraid, they can envision a blanket of protection surrounding them:

"Picture yourself lying quietly under a warm, protective blanket. This blanket covers you from head to toe and is made from special cloth. The blanket radiates a golden, protective light.  This golden light covers you completely. Anything that is not welcome cannot come near your warm, golden blanket.

This blanket protects you and keeps you safe from anything and anyone you don't wish near you. It is made of powerful, protective light, and no harm can come to you when you are surrounded by the glow of this blanket. It feels good to be safe. It feels good to be warm and cosy under your golden blanket. This is a happy place, where you are always safe. The warm golden glow of this blanket keeps guardian angels close to you at all times."

Any similar wording that you find appropriate will do. The key is to emphasize the protective quality of the blanket. You could also expand this technique by supplying a new physical blanket to the child.

The principal activity contributing to this is Relaxation

Ultimately, however, a large number of the observations here are occasioned by the person simply Being a child