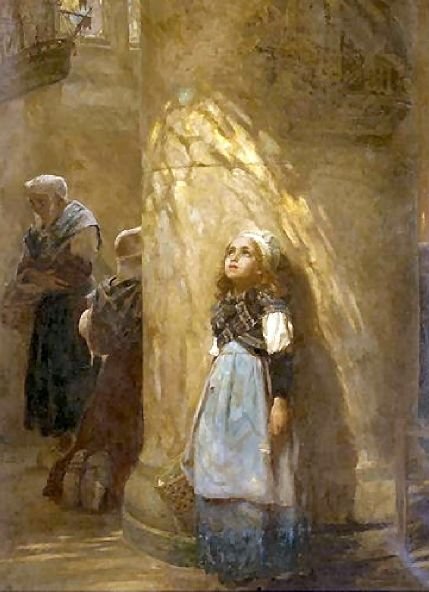 It was not you, alas, not his mother
that bent the arc of his brow into such expectation.
Not for you, girl, feeling his presence, not for you,
did his lips curve into a more fruitful expression.

Do you truly think that your light entrance
rocked him so, you who wander like winds at dawn?
You terrified his heart, that’s so: but more ancient terrors
plunged into him with the impetus of touching.

Call him...you can’t quite call him away from that dark companion.

Of course he wants to, and does, escape:
relieved, winning his way into your secret heart,
and takes on, and begins himself.

Did he ever begin himself, though?

Mother you made his littleness: you were the one who began him:
to you he was new, you hung the friendly world
over new eyes, and defended him from what was strange.

Oh where are the years when you simply repelled
the surging void for him, with your slight form?
You hid so much from him then: you made the suspect room
harmless at night, from your heart filled with refuge
mixed a more human space with his spaces of night.

Not in the darkness, no, in your nearer being
you placed the light, and it shone as if out of friendship.
There wasn’t a single creaking you couldn’t explain with a smile,
as if you had long known when the floor would do so....

And he heard you and was soothed.

Your being was so tenderly potent: his fate there stepped,
tall and cloaked, behind the wardrobe, and his restless future,
so easily delayed, fitted the folds of the curtain.