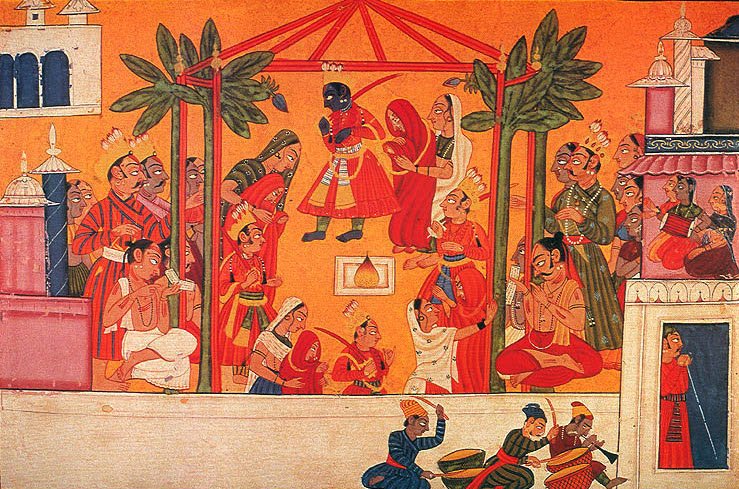 He was a member of the Bhakti movement and also one of the Saguna poets, along with Mirabai and Surdas.  He expressed much of his philosophy via his poetry,
for example:

Ramacharitamanas
I recognise only one relationship: devotion.
Caste, kinship, lineage, piety, power, wealth, strength, connections, virtue, achievements -
a man with all these but without devotion
is like a cloud without water 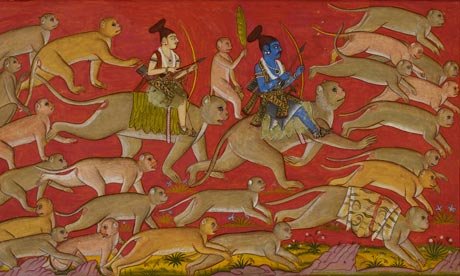 The classic tale of Ram, the Ramayana, was framed in Sanskrit by the poet Valmiki some two thousand years ago.  Sanskrit, however, was the language for gods and Brahmins, not for the ordinary person and it is only due to Tulsidas, through his version – the Ramacharitamanas – that this epic stayed alive “a verse epic in the eastern Hindi dialect of Avadhi that plumbs the depths of what its title calls The spiritual lake of the Acts of Ram”.

The impact of Tulsidas and his works on the art, culture and society in India is widespread and is seen to date in the Ramlila plays [Tulsidas’s folk-theatre adaption of the Ramayana], Hindustani classical music, popular music, and television series.

Songs of the Saints of India – Professor John Stratton Hawley
Tulsidas is possibly the establishment saint of Benares and indeed of all north India.  Almost universally assumed to be a Brahmin, Tulsi was in truth a true bhakti – a poet whose language and concerns tied him to people of all castes.  In the tension between his brahminhood and his bhakti lies the power he has wielded ever since he began chanting the manas some four hundred years ago. 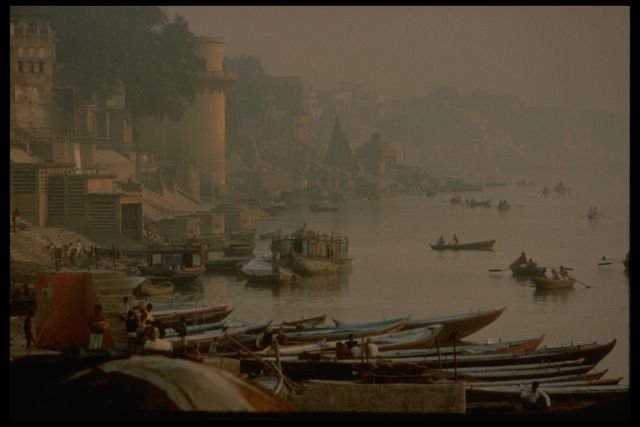 Tulsidas spent most of his life in the city of Varanasi.

The Tulsi Ghat on the Ganges River in Varanasi is named after him and he founded the Sankatmochan Temple dedicated to Hanuman in Varanasi.

Tulsidas also started composing poetry in Varanasi and initially used Sanskrit.  But after he had a dream, in which he was instructed to compose poetry in the vernacular instead of Sanskrit, he moved to Ayodhya and composed his poetry in Awadhi.

Twelve works are widely considered by biographers to be written by Tulsidas, six major works and six minor works. Besides these twelve works, four more works are believed to be composed by Tulsidas.  Based on the language of the works, they have been classified as follows– 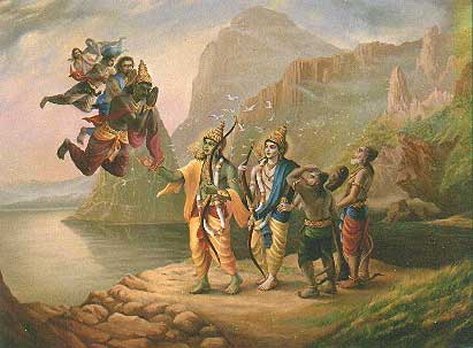 The Awadhi works are as follows: 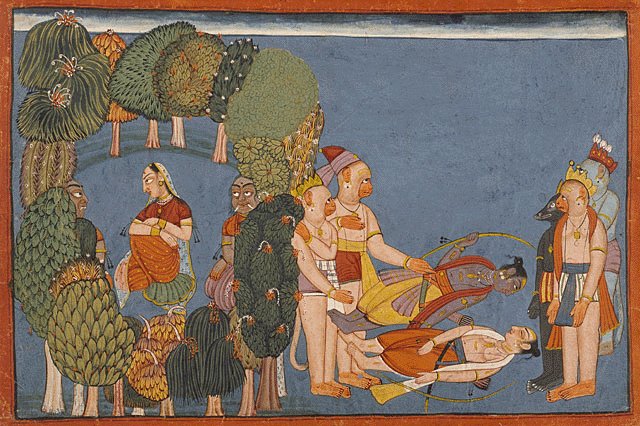 The Braja works are as follows: 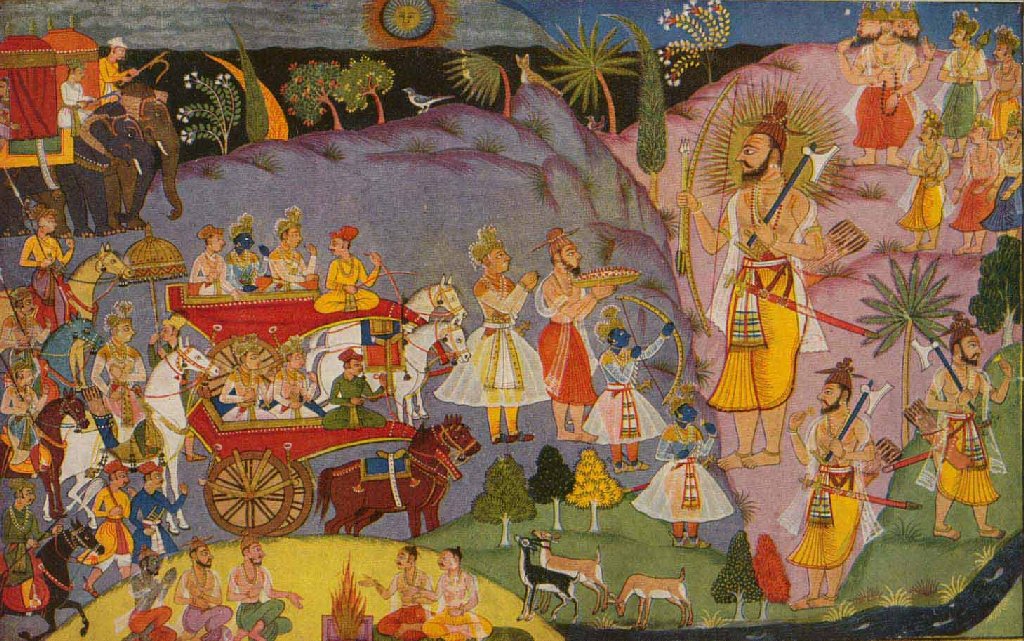 The following four works are popularly attributed to Tulsidas: 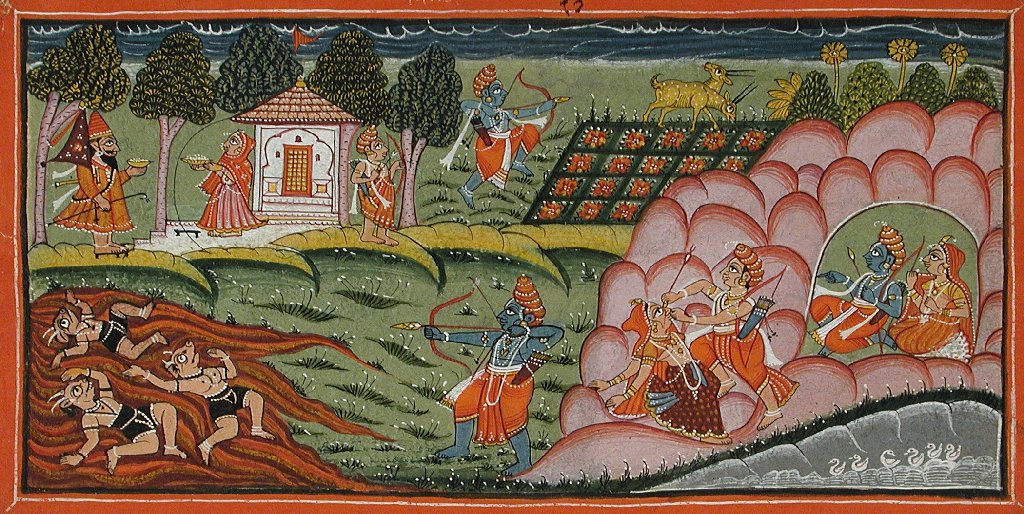 A vast edifice of legend and myth has built up around Tulsidas, though he himself has recorded only a few facts about events of his life.  Priyadas in particular, writing 200 years later, embellished Tulsidas’s biography significantly adding numerous extra stories - the power of working miracles, the ability to bring back a dead Brahmin to life, the ability to conjure up armies of monkeys and the ability to get statues to move!  Other sources have added the ability to have visions and hallucinations and these seem to be better substantiated.

Until the late nineteenth century, the two widely known ancient sources on Tulsidas' life were the Bhaktamal written by Nabhadas between 1583 and 1639, and a commentary on Bhaktamal entitled Bhaktirasbodhini written by the afore mentioned Priyadas in 1712.

In the 1950s a fifth ancient account was published based on an old manuscript, the Gautam Chandrika composed by Krishnadatta Misra of Varanasi in 1624.  Krishnadatta Misra's father was a close companion of Tulsidas.

Although all these five works are often used to produce modern biographies of Tulsidas, that by Veni Madhav Das and Krishnadatta Misra are possibly the only two reliable sources. 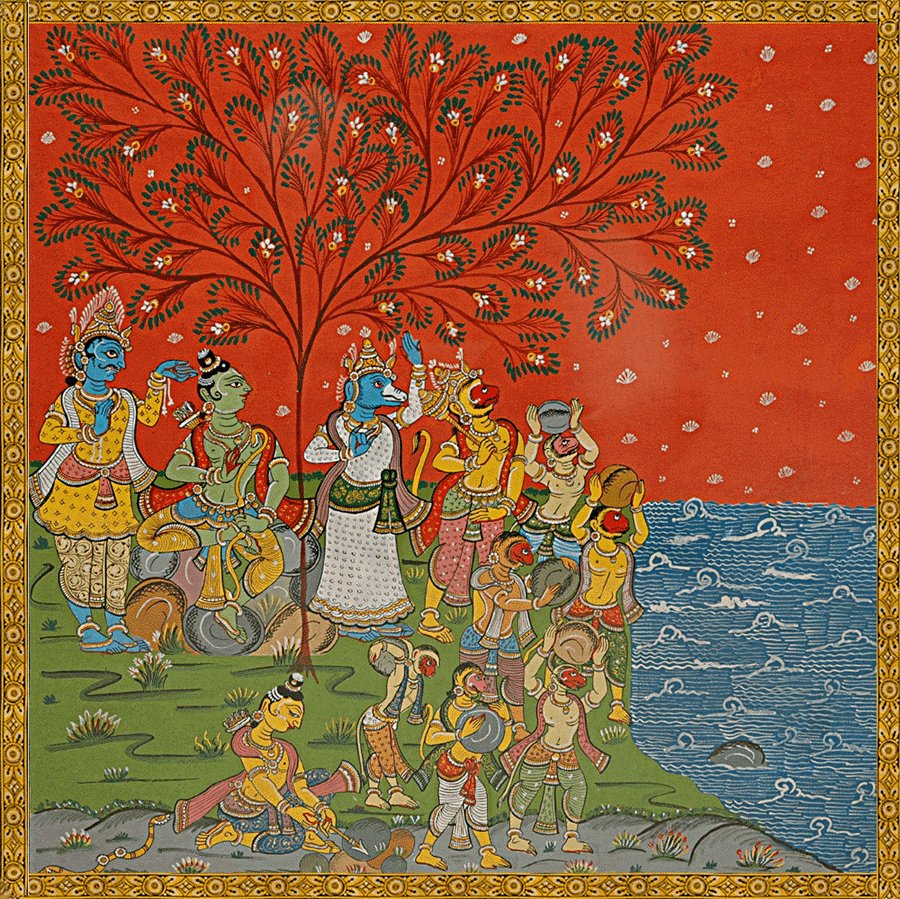 Tulsidas was born in Rajapur (Chitrakoot), a village on the banks of the river Yamuna, on the border between the states of Uttar Pradesh and Madhya Pradesh.  There is a difference of opinion among biographers regarding his year of birth – suggestions include 1554 (1497 CE); 1589 (1532 CE); and 1600 (1543 CE).

According to the Mula Gosain Charita, he was born under the Abhuktamūla constellation, which according to Jyotisha (Hindu astrology) “causes immediate danger to the life of the father”.  Due to the inauspicious events at the time of his birth, he was abandoned by his parents and sent away with Chuniya, a female servant.  Chuniya took the child to her village of Haripur and looked after him.

After her death, a Vaishnava ascetic of Ramananda's monastic order took him in as an initiate and gave him the name Tulsidas.  The ascetic also started to narrate the Ramayana to Tulsidas.  As he was very young, Tulsidas did not understand it, but it clearly affected him at a more emotional level

And then, I heard the same narrative from my Guru in a Sukarkhet (Varaha Kshetra). I did not understand it then, since I was totally without cognition in childhood. Ramcharitmanas 1.30 (ka). 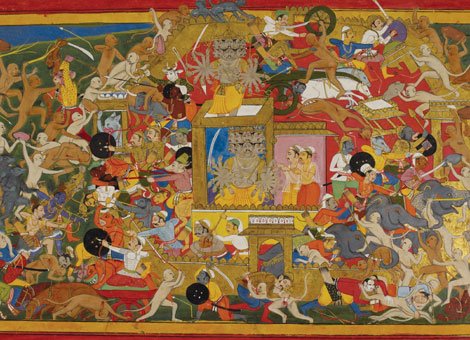 Tulsidas further mentions in the Ramcharitmanas that his guru repeatedly narrated the Ramayana to him, until eventually he began to understand it.  This exposure to the Ramayana so early in life was to have a profound influence on all Tulsidas’s poems and approach to religion.

Tulsidas later went to the sacred city of Varanasi and studied Sanskrit grammar, the Vedas, and other sacred texts and philosophical works, for around 16 years under the guidance of his guru Shesha Sanatana, a renowned scholar on literature and philosophy.  The Maharajah of Benares/Varanasi used to allow his palace to be used for the month of ram lila – The Play of Ram – and there are indications that Tulsidas also saw these re-enactments

Songs of the Saints of India – Professor John Stratton Hawley
All month long people arrive in boatful after groaning boatful to see the god-king Ram, played by a Brahmin boy, abandon the throne that is rightfully his, wander through the forests of India in fourteen years of exile and return at last to be crowned in glory.  Sometimes he is accompanied only by his courageous beautiful wife Sita and his fiercely loyal younger brother Laksman – roles also taken by Brahmin youths.  At other times, however, he is surrounded by an army of monkey warriors led by its greatest devotee, the monkey general Hanuman.  With the help of these animal allies he is able to defeat the demon king Ravan in his island fastness.  Ravan’s thirty foot high bamboo and paper form bursts into a tower of fire as Ram’s forces set the torch to his capital and thereby free Sita from her captivity.  On the last day of the cycle, Ram returns to be crowned.

We can see from this that the story is an allegory of the spiritual path – masculine and feminine, demons, islands, monkeys, etc, but wonderfully told to be very memorable, especially to a child. 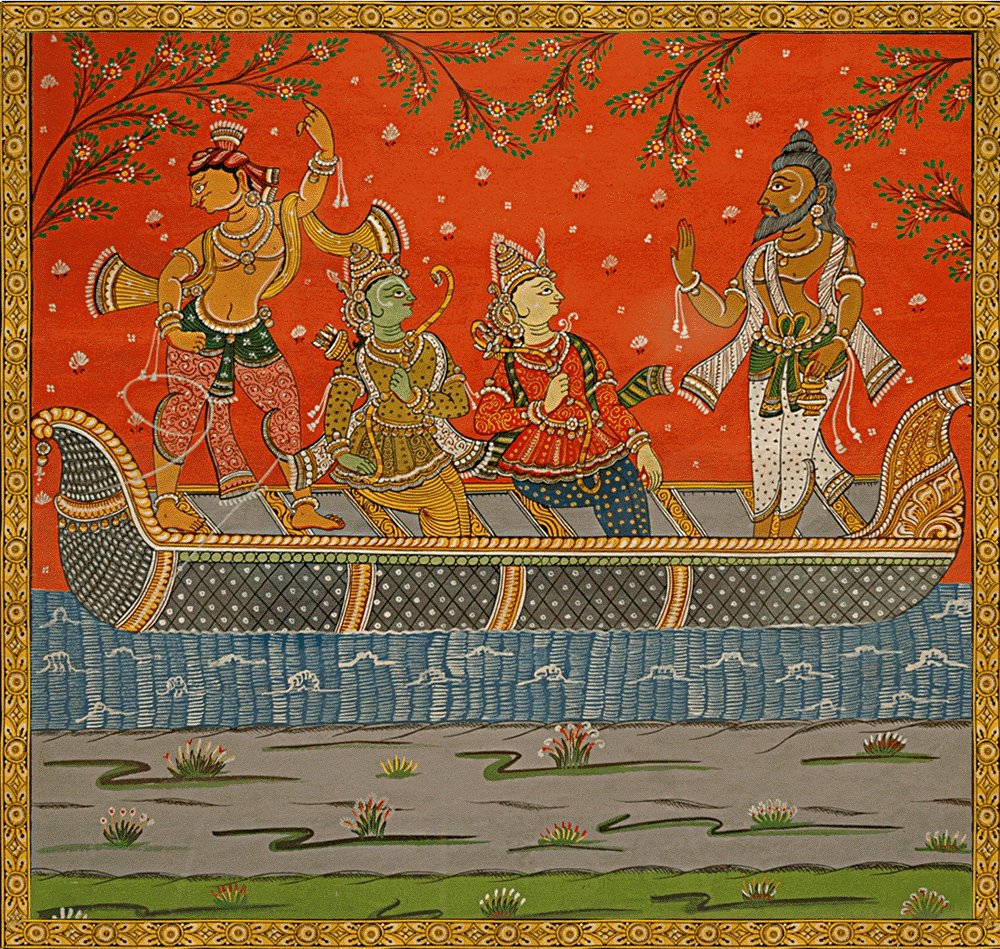 After completing his studies, Tulsidas returned to his birthplace Rajapur seeking out his parents, but found his family was no more, with both parents dead.  He then settled down and married [according to the Mula Gosain Charita]  a lady called Ratnavali in 1583 (1526 CE). They had a son named Tarak who died as a small child.

Songs of the Saints of India – Professor John Stratton Hawley
Tulsidas is said to have loved his wife exceedingly and when one time he returned from a trip to find that she had gone to her parents’ home, as is the Hindu custom for young brides at certain times of the year, he nearly went out of his mind.  Immediately he raced off to find her

Much later accounts have Tulsidas becoming a Sadhu, but there is nothing to bear this out as fact in contemporary accounts.  We do know however, that Tulsidas spent most of his time at Varanasi, Prayag, Ayodhya, and Chitrakuta but visited many other places including Badrinath, Dwarka, Puri and Rameshwaram and the Himalayas.   He also visited the Manasarovar lake in current-day Tibet. 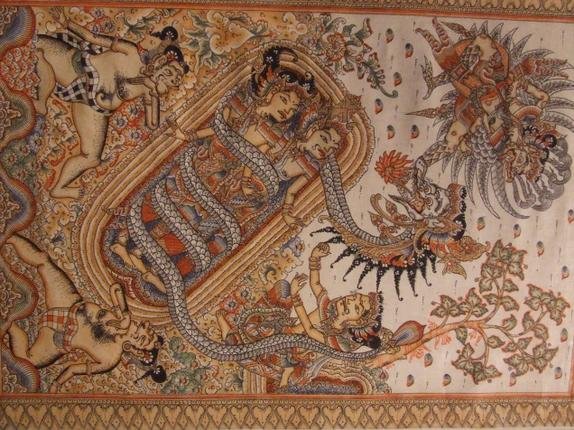 Around Vikram 1664 (1607 CE), Tulsidas was afflicted by acute pain all over his body, especially in his arms. He then composed the Hanuman Bahuk, where he describes his bodily pain and suffering in several stanzas. Later he was also afflicted by ‘Bartod boils’. Benares was frequently visited by the plague and it appears that Tulsidas both caught the plague and died from it – in some distress.

Tulsidas died at the Assi Ghat on the bank of the river Ganga in the Shraavan (July–August) month of the year Vikram 1680 (1623 CE). Like the year of his birth, traditional accounts and biographers do not agree on the exact date of his death.

Songs of the Saints of India – Professor John Stratton Hawley
There is something genuine and significant about Tulsidas that emerges from his own writings; his ecumenity.  In a more considered way than any of the other poets in the Bhakti tradition, Tulsi was a theological bridge builder, someone interested in spanning the gaps between several of the important religious communities of the day and in the course of doing so, between the gods themselves….