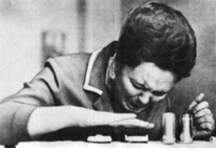 Nelya Mikhailova, described in some biographies rather condescendingly as a ‘plump, attractive, dark haired Leningrad housewife’ with ‘an open face and dark expressive eyes’ and ‘Slavic features – high cheekbones and a turned up nose’, was a lady with an extraordinary talent for moving objects with her mind alone.  Nelya Mikhailova was a pseudonym, her real name was Ninel Sergeyevna Kulagina.  (Russian: Нине́ль Серге́евна Кула́гина) (aka Nelya Mikhailova) (30 July 1926 – April 1990).

Despite having an extraordinary talent “When Nelya Mikhailova wants something, she just stares at it and the object begins to creep towards her”, she never turned her talent into a money making act.  Instead she co-operated with Soviet scientists, moving matchsticks and wineglasses, cigarettes and bread, aluminium tubes and water pitchers, apples and windmills, whilst they looked on.  She ordered the objects to spin, jump off tables, form in lines and march across the table top and dance about in sealed bottles.  And they did. 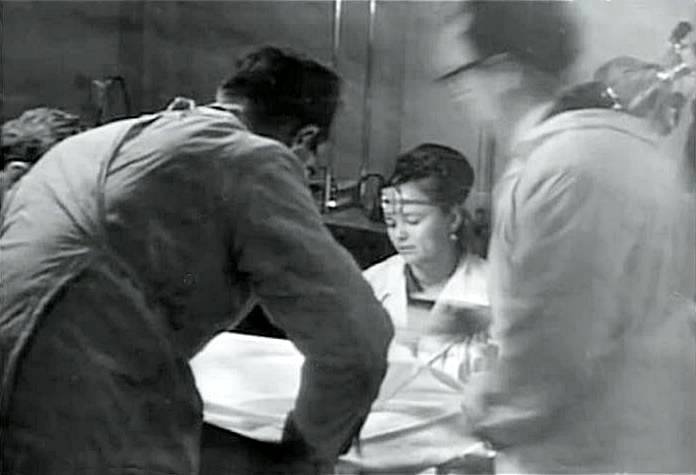 According to Soviet scientists her PK power had moved and stopped the pendulum of a wall clock, moved plastic cases, water pitchers weighing a pound and an assortment of dishes, cups and glasses.  And all without touching the objects. 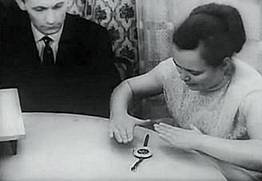 Reporters from Moscow Komsomol and Moscow Pravda, published by the city’s Communist Party Organisation said they had watched the then 41 year old Nelya in action and found “no hidden threads, magnets or other gimmicks”.

And then they swept all the research away, partly because scientists could not work out how it was done, but perhaps more importantly they were frightened of the potential side-effects such powers might produce, if anyone ever did work out how it worked.

The measuring of Mikhailova

The experiments that were carried out with Nelya were both informal and formal.  And a great many of the experiments were carried out under very strict test conditions.  The Mendeleyev Institute of Metrology, for example studied Nelya and stated in Moscow Pravda that she had moved aluminium pipes and matches under the strictest test conditions, including observation on closed circuit television.  And after all this they could offer no explanation for the ‘phenomenon of the movement of objects’. 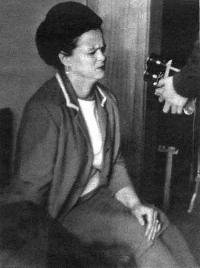 Chairman of Theoretical Physics at Moscow University and holder of the Laureate of the State prize, Dr Ya. Terletsky publicly proclaimed on March 17th 1968 in Moscow Pravda “Mrs Mikhailova displays a new and unknown form of energy”.

Physicists from the Soviet Union’s Joint Nuclear Research Institute at Dubna tested her, as did those from the Institute of Physics of the Academy of Sciences of the USSR.  Even Dr Peter Kapitsa, developer of the atomic and hydrogen bombs for the Soviet Union, had watched one test with Nelya.

Over 40 top scientists in Russia including two Nobel prize winners and the much respected Dr Vasiliev, who made it his life’s work to test people like Nelya, researched her gifts and witnessed them.  Dr Vasiliev worked with her right up to his death.  They even made a film of her, biologist Edward Naumov produced the film himself.

Those who saw the film testified to the suffering this testing produced in Nelya.  She lost a great deal of weight, as if she was being physically consumed in order to generate the energy required.
"She was actually much sicker than she looked in the fiIm," Naumov related. "The strain on her heart was so great we had to stop the cameras several times. It took us over seven hours to make the film and afterward she temporarily couldn't speak or see. For days after doing these tests, her arms and legs pained, she felt dizzy and couldn't sleep."

Why did she do it?  Maybe she was patriotic.  Maybe she just liked being helpful.

Nelya Mikhailova seems to be an all-around psychic. She's supposedly telepathic, clairvoyant, and psychometric as well as packed with PK. But the Soviets are not looking at her as a performer or as a personality of exotic plumage. They see Nelya as a means to discovering principles. The important questions about Mikhailova's PK obviously should centre not on the medium herself but on the scientific discoveries. …..Nelya has been a means to helping the scientists elucidate new avenues. And it's not so easy to be a means.
Aside from public harassment, Nelya suffers great physical stress during PK tests.  But Nelya Mikhailova grew up fighting; she grew up during the siege of Leningrad under some of the worst deprivation and stress the world has known. There's no reason to think she'll throw in the towel while scientists still believe they can uncover more about the unrealized, potential and wonder of the human being by rigging her up like an astronaut and attaching her to a labful [sic] of machines. 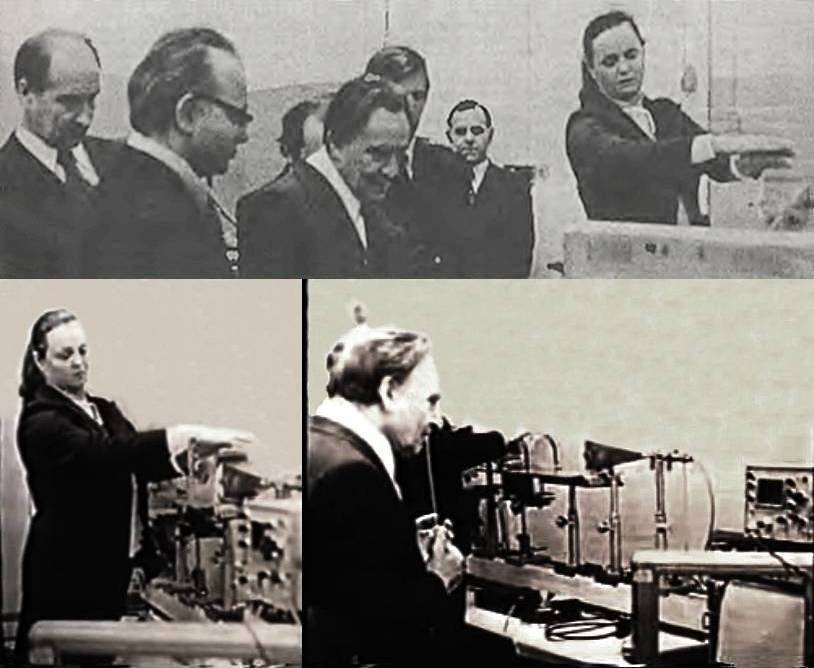 Officially she did not even exist and her powers were never admitted.  In the bizarre conditions that were Soviet Russia, the political turmoil and shadowy machinations that defined Russia during the Communist era, denied the existence of Soviet parapsychology research, even though it was well funded and extensive.  People from Bulgaria, the then Czechoslovakia, Georgia, the Ukraine and so on, were all involved, they even flew in for Conferences in which hundreds attended.

Dr Vasiliev pioneered ESP study in Russia despite the vast difficulties of the war and the Stalin regime.  He had two labs in Leningrad and after his death in 1966, his students continued his work.  They researched telepathy, dowsing – and Psychokinesis.

Dr Efimov
We must widen the consciousness of humanity.  It is vital that the paranormal powers hidden in humans be used for good

And here lies the problem.

The dangers of PK

Mind control and the sort of powers exhibited by Nelya, are actually potentially very dangerous if in the wrong hands. 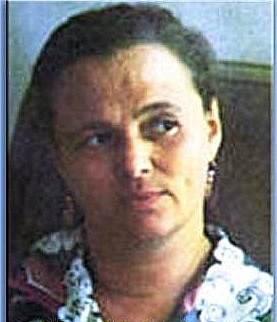 The Soviet authorities were not just in denial for egotistical reasons ‘I can’t explain it therefore it does not exist’, they knew it existed, but they were also stating it did not exist, in order to control the possible side-effects that might result from a wider understanding of how it worked.

This was all about the fear of unleashing yet more sorceror’s apprentices, on a world already reeling from science’s onslaught of drugs, pesticides, nuclear energy, insecticides, heavy metals, toxins, and genetic manipulation.  Science was and is out of control, both morally and ethically and PK was yet another straw on the already broken camel’s back.

But the way the Soviet authorities clamped down on PK was particularly hard on Nelya.  Indeed it was cruel.  She became the victim of possibly the first concerted Soviet ‘smear campaign’.  The official newspapers said she was a fraud and a swindler.  Then they said she cheated the public out of 5,000 rubles.  They had her selling refrigerators door-to-door.  She was a sorceress

There were telephone threats, a campaign of harassing phone calls launched against her that became so vicious that her friends decided to hide her in the country outside Leningrad.

But lest we forget, we must also bear in mind the following.

One of Kulagina's most celebrated experiments took place in a Leningrad laboratory on 10 March 1970. Having initially studied the ability to move inanimate objects, scientists were curious to see if Kulagina's abilities extended to cells, tissues, and organs. Sergeyev was one of many scientists present when Kulagina attempted to use her energy to stop the beating of a frog's heart floating in solution. He said that she focused intently on the heart and apparently made it beat faster, then slower, and using extreme intent of thought, stopped it.

Nelya Mikhailova knew how to issue the death prayer.

Nelya was born only a decade after the Russian Revolution and the turbulent civil war.  She was only 14 when the Nazis invaded and the siege of Leningrad began.  Her city was a battleground and Nelya, like many Leningrad children, became a soldier.  She joined the front lines of the Red Army along with her brother, father and sister. 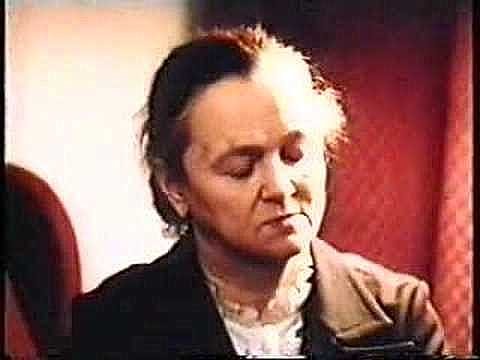 The siege of Leningrad lasted over three years, and people starved.  The shortage of food and hunger lasted for well over 900 days.  The bread ration was 4oz per day, the winter temperatures dropped to 40 degrees below zero, water and electricity were cut off and the city was being constantly razed by bombs and artillery fire.  Nelya served in Tank T-34 as a radio operator.

“She took part bravely in the attack” a Red Army booklet asserts, and still in her teens she became senior sergeant of the 226th Tank regiment.  Later, Nelya and almost all her family served on an armoured train which helped bring desperately needed provisions to the stricken city.

The fighting finally ended for her, when she was seriously injured by artillery fire.  At the end of the war, she married an engineer, and settled down with him in an apartment in a new development on the edge of Leningrad, which was ironically part of the front line she had defended during the war.  She had a son, who eventually entered the army, and at the time of her testing by scientists, Nelya was not just a housewife, but a grandmother as well.

Nelya first recognized her ability, which she believed she had inherited from her mother, when she realized that items spontaneously moved around her when she was angry. She said that in order to manifest the effect, she required a period of meditation to clear her mind of all thoughts. When she had obtained the focus required, she reported a sharp pain in her spine [the kundalini effect] and the blurring of her eyesight. Reportedly, storms interfered with her ability to perform psychokinetic acts.

The brave and dogged Nelya, who towards the end of her life finally was allowed to call herself by her real name, kept to her lab rounds until she died in 1990, aged 64, close to the time the Soviet Union ‘expired’.

At her funeral, Soviets eulogized her as "a hero of Leningrad" who fought on the front lines during the nine-hundred-day siege of World War II. Many called her a greater hero for her later sacrifices for her country allowing scientists to dismantle her in their hunt for an elusive energy. It sapped her time, her health, and hastened her death….
Decades of medical data showed PK devastated Kulagina, skewing everything from her heart to her hormones.  How did PK feel to her?
She told Elsie Sechrist, psychic to psychic, that she felt a strong energy like a prickling sensation begin to move up her spine to the base of her brain – kundalini?  She knew when an object was about to move.  She felt sudden pain and her blood pressure soared.
Yet her long ordeal validated and built up far and away the most extensive, high level scientific information we have about a fabled human ability-psychokinesis.

Let us hope that in all the upheavals it has not been lost.