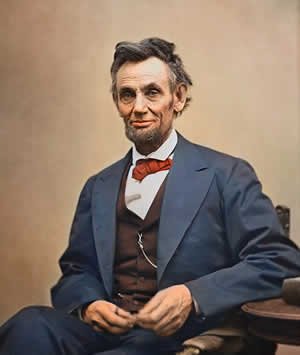 Abraham Lincoln  (1809 –1865) was the 16th President of the United States, serving from March 1861 until his assassination in April 1865. Lincoln led the United States through its greatest constitutional, military, and moral crisis—the American Civil War - preserving the Union,  abolishing slavery, strengthening the national government and modernizing the economy. Reared in a poor family on the western frontier, Lincoln was self-educated, and became a country lawyer, a Whig Party leader, Illinois state legislator during the 1830s, and a one-term member of the United States House of Representatives during the 1840s.

Some may be amazed that he is here on this site, but Abraham Lincoln was clearly open to spiritual communication and the reason I say this is because he used the services of a medium called Nettie Colburn.  Most of what Nettie achieved under trance conditions for him, could only have been achieved by there being very strong inter composer communication between the two of them.  Furthermore both Abraham Lincoln and his wife were believers in the spiritual world and the power of mediums. 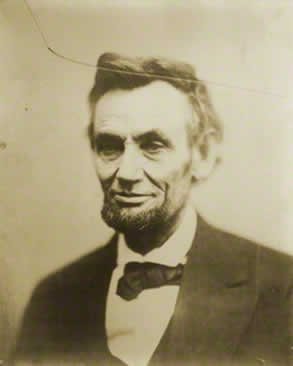 As a young man, Lincoln was a religious skeptic, that is to say he found institutionalised religion to be a waste of time, but that is not to say he did not believe in the spiritual. He never joined a church but was happy to quote from the Bible, furthermore he had great admiration for evangelical Christianity – direct spiritual experience.  In the 1840s, Lincoln subscribed to the Doctrine of Necessity, “a belief that asserted the human mind was controlled by some higher power” – so he in essence believed in puppets and the Great Work.  By the 1850s, Lincoln admitted to a belief in "providence"  - both fate and destiny.  But what appears to be a driving force at the time of Nettie’s involvement was Grief.
The Lincolns had four sons - Robert Todd Lincoln was born in 1843 and Edward Baker Lincoln (Eddie) in 1846. Lincoln "was remarkably fond of children".  Edward died on February 1, 1850, in Springfield, probably of tuberculosis. "Willie" Lincoln was born on December 21, 1850, and died on February 20, 1862. The Lincolns' fourth son, Thomas "Tad" Lincoln, was born on April 4, 1853, but survived his father dying of heart failure at the age of 18 on July 16, 1871.   Robert was the only child to live to adulthood and have children.  So at the time of Nettie's involvement he was wide open to spiritual communication.

Miss Colburn’s role as unofficial helper to the President began in December 1862 when Mary Todd Lincoln attended a séance at the Georgetown home of Cranston Laurie, a statistician with the Post Office Department.  It continued right up until Lincoln’s death in 1865.  Present that first evening were the Hon D E Somes, a former congressman from Main; Thomas Galer Foster, an official at  the War Department; the Rev. John Pierpont a chief clerk in the Treasury Department; Mrs. Elvira M. Depuy of Washington; the Lauries and their daughter, Mrs. Belle Miller. 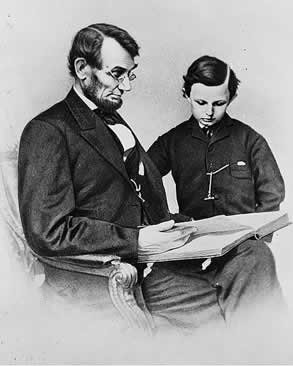 Lincoln with his son Tad

Mrs. Lincoln was so impressed by what she heard and saw that she invited Miss Colburn to hold a seance for the president, and the first meeting with Abraham Lincoln occurred a few days later in the Red Room of the White House. An account of this and subsequent seances is to be found in several books on file at the Library of Congress.

The accounts in the observations I have included were put together by Ruth Montgomery, biographer of Jeane Dixon.  She used quotes from the testimony of various witnesses as recorded in those books.

I could have put this description under the heading of Nettie Colburn as the source and it would have been technically more accurate, but little is known about her other achievements as a medium.  She was an amateur medium at the time she helped Lincoln and accepted no money for her help.  She discovered her abilities by chance and felt it was wrong to charge for ‘gifts God has bestowed on me’.  She was a ‘trance medium’, in effect going into a trance and becoming ‘possessed’ by ‘spirits’ who communicated through her.  She was always totally unaware of what she had communicated under these trance conditions.

At the time the observation occurred, President Lincoln was heavily oppressed by Civil War decisions.  It may also be worth mentioning that after his first love, Ann, died when she was 22, his second relationship with Mary Owens fizzled out and marriage to Mary Todd, who was from a wealthy slave-holding family in Lexington  Kentucky, was not exactly a love match, though it may well have been a match of minds.