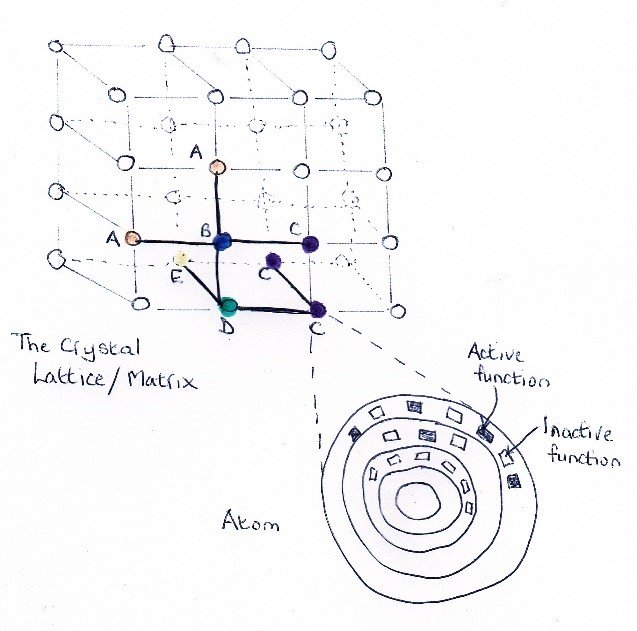 We know that the universe consists of Atoms in a sea of Energy that are held together by the forces of repulsion and attraction in the form of a lattice or matrix. Thus the Matrix is not a concrete object or a 'physical thing' it is analogously like a software construct.

Atoms and the Matrix

External to every atom, is unordered energy - the Greeks called it chaos, but in fact it is absolutely still, a purple ink of functionless energy - potential.

An atom is a ‘software’ object, it is organised energy, programmed energy – there is no matter.  Energy is either ordered [programmed] and thus system, or it is unordered – ‘chaos’.

Atoms form themselves into aggregates.   Neither Atoms or Aggregates are ‘physical’.  They are analogously like software objects, whose functions are arranged concentrically in layers around a central core.

In the diagram above, if we were to separate out the atoms in the lattice we would end up with 2As, 1B, 3Cs, 1D and 1E, because mathematically this is the formula to 'make' an Aggregate which we shall call F [say].  Whilst the bonds are formed, however, all the atoms give out the message that they are an Aggregate F and their functions only reflect this state.  Thus in some senses for every unique aggregate, the signature is that set of functions which are active.

Furthermore every atom in that aggregate will have its own unique identifier showing that it is now F, for example.

The philosopher Alfred North Whitehead called both aggregates and atoms - Entities and this is a useful name to use when discussing functions and processes.

So here we have the tie in between the idea of a matrix of atoms and the systems of the universe.  The universe is a system having processes/functions.  The processes are stored in each atom – xillions of cosmic eggs – all of which have a set of processes/functions, that broadcast its properties to the other atoms.

Processes are programmed with units of energy.  The processes or functions which are not valid for that particular entity have units of energy with a spin rate of zero.  Those that are operational are given a spin rate which is non zero and they are layered in the cosmic egg/atom.

Every atom/cosmic egg has functions which can either handle messages sent to it and respond accordingly, or which broadcast the properties that cosmic egg possesses.  It must also be able to keep its own 'state', in order that invalid changes are not made on receipt of messages.

The Aether level shown in the diagram above is where the classes of entities are held.  In other words the central core holds the Intelligence hierarchy.

The outer layers of the cosmic egg [atom], describe the processes/functions of each  Actual Entity – but the inner core holds the classes of entities, the system of the universe – the tree of life – to which the Actual Entity belongs.  The Actual Entity is the leaf on the tree.

Symbolically, the ‘Egg’ is divided up geographically into segments or cones. Every cone is then an actual thing - an aggregate or an atom.  Thus every atom is a mini universe.  The Elements are used to hold the functions related to every individual aggregate/atom - an Actual Entity or Entity occurrence.  The Aether level holds the Intelligence hierarchy from which they were derived.

So again another analogy.  The central core of every atom/aggregate/entity is like the Master package for the universe, but organised in the form of a Tree which is the Intelligence hierarchy. The Actual Entities - the occurences, - are analogously like copies of parts of the overall package, and there may be millions of copies of the same part of that package.  The Entity 'Dog' [Aether level/Tree of life/Intelligence hierarchy] has an actual occurrence of Fifi, [the Elements - a cone of energy made of Fire, Earth, Water or Air] and dogs just like Fifi, Rover, Flossy and Jesssie.  The ‘human being sub-package’ for example is used to spawn any number of human being copies, which are then made unique by the addition of processes that will make them so  [attributes of character and personality for example].

Note that functions are powered by chaos, and that energy recycling takes place.

The Matrix and process execution

An actual entity [atom or aggregate] is a self-willing thing, it drives its own processes.  It may respond to an event – an incoming signal – or it may have its own objectives which serve to make it drive itself.  Where it is not responding to a message sent to it, it is constantly broadcasting what it is – what its relationships are.  Where it is acting on an external event or an internal objective, it may be adding new relationships and breaking off unwanted ones.

As the shuttle of the loom zoots across the warp threads one execution of the processes takes place and the universe renews itself.  A new universe is born every time the shuttle passes, and the old version with all its actual entities and relationships becomes the past – history – but a history that can be explored during spiritual experience [exploring group perception and out of body]

As just one of millions of warp threads we [our consciousness and perceptions] can only perceive the current weft thread.  But the shuttle keeps on moving, the flow of control is continuous.

It is worth remembering the link with the one-electron universe postulate, proposed by John Wheeler in a telephone call to Richard Feynman in the spring of 1940.  It hypothesises that all 'electrons' and 'positrons' are actually manifestations of a single entity moving backwards and forwards in time. Analogously – the shuttle.

Any given moment in time is represented by a slice across spacetime, and would meet the warp lines a great many times.  At those points, half of each warp line will be directed forward in time and half will be directed ‘backwards’.

A time slice is a quanta – one zoot of the shuttle - ripples in time.  The entire system of ‘actuals’ – actual entities and relationships is left consistent logically after this execution of the processes.

Furthermore,  the matrix of all atoms – the lattice is fixed, but the process execution changes the functional states within each atom.  A bit like pixels moving across a 3D screen.  If we look at it this way, we can now see where ‘time’ goes, if we are moving across the screen then the trail of time is behind us as we move forward.  We are all relatively moving forward in space - through the matrix.

Time is thus not a discrete interval like a second or minute, but is defined as one self-consistent execution of the actual entity’s functions/processes – a transaction. Meaning time for one entity may actually be different to time for another entity.

Thus the matrix is the loom, except that it is a 3D loom.

Notice that this design make it possible to give no absolute time for the ‘beginning’ of the universe.  It is always coming into being, always becoming, always evolving, always changing from moment to moment , quanta to quanta.  Any changes are achieved by tweaking the master package and rolling the changes out – just as a software developer might do.

The actual entity  is immortal via its Higher spirit.  The Higher spirit gives it a unique identity – its name – and maintains its existence after each execution of the system of the universe with all its processes.  Each slice hangs together  via this concept.

The Matrix and 'concrescence'

Alfred North Whitehead referred to the ‘current’ [as opposed to past and future] that we can perceive normally with our 5 senses as opposed to our sixth sense, as the ‘concrescence’, implying that – if we use the analogy – the water of spirit coalesces into the crystals of form.  But as we have seen above it also'melts' to be replaced by the next execution of the processes.

Thus, again, the current moment is like a vast thin sheet of ice moving across the matrix, but not one unchanging sheet, it is a sheet continually formed by freezing and then melting again, but leaving a history of the past behind it.  The universe is expanding because we are moving through the matrix and leaving our history behind us.

The Matrix, games and symbols

The two dimensional view of the Matrix is symbolically used in Chess.  The three dimensional view is now the realm of film makers [The Matrix], numerous game makers – “A cool wide screen Matrix game with almost unlimited moves” -  [there is even a company called The Matrix Games Company] and numerous authors [for example Taking the Red Pill: Science, Philosophy and Religion in "The Matrix" (Paperback) by David Gerrold].  As such the concept is well known, but it has been left to the more creative people to keep the idea going.

The word matrix comes from the Aryan root word MATRA.  This word is also the root of words such as Mother, measurement and mathematics.  The Great matrix is also the ‘tricky mother’ and matrix literally means ‘the womb of matter’.  All this is very relevant as if you now turn to the section on the symbolism of the Mother and Father, you will see that the Mother is used symbolically as the source of souls, she ‘gives birth’ to souls in the physical level – animates them, so to speak. 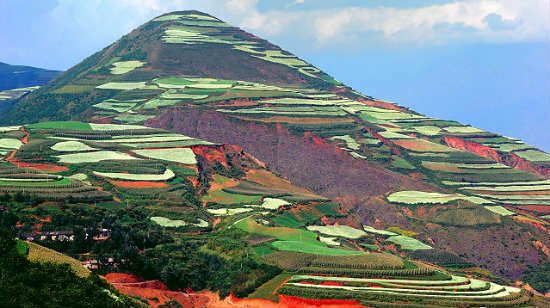 The division of the Matrix into boundaried spaces produces what is called a cell.   Most of the landscapes seen in visions and out of body experiences are constructed around cells.  A detailed description is provided in the Cell page.  Cirlot is normally good on symbolism, but the following is perhaps a litle too deprecatory, intellect won over wisdom here......

J E Cirlot – The Dictionary of Symbols
…...... from earliest times, heaven has been thought of as consisting of several heavens, owing to the tendency of primitive logic [sic] to assign a separate, cellular space to each celestial body or group of bodies..........

as you can see, however, from the quote, the idea of a cell is a very old one.  Give me primitive logic every time.

These days within games, films and books, no extra symbolism is used to refer to the Matrix, as we have seen above it is referred to as the Matrix, but the symbol most frequently used to represent the Matrix in the past was the Labyrinth [not the Maze which is different].  It was not unusual for people to 'walk the labyrinth' or be tested on the labyrinth with models, in order to familiarise them with the spiritual world they may meet during an out of body experience or vision.