Hokusai's mother was a Geisha.  He thus knew what it meant to achieve spiritual experience via love, making love and other forms of sexual experience.  These days Hokusai’s Geisha paintings tend to be viewed [in the west] as a sort of high class pornography, but this shows absolutely no understanding of what they are attempting to depict.  All his paintings in this series show that spiritual experience of the highest kind – ecstasy in its true sense -  is obtainable via love – love making of various sorts.  He is actually depicting ‘union’ in the same way that Hindu temples often showed couples achieving union.  The vastly enlarged penis is symbolically an extension of the celestial pole.

The colours used here may or may not be correct, but the rather faded pink colour was, I think, at one time [or should be] red to indicate Fire and thus union above Fire – the mystic marriage. He is wearing the Matrix and the colour symbolism here is not correct, I suspect later printers have taken liberties with the colours.  It needs to be green or brown.  The belt is symbolic and he is wearing a form of cross – this is the cross you often see in pictures of the Hung snake. 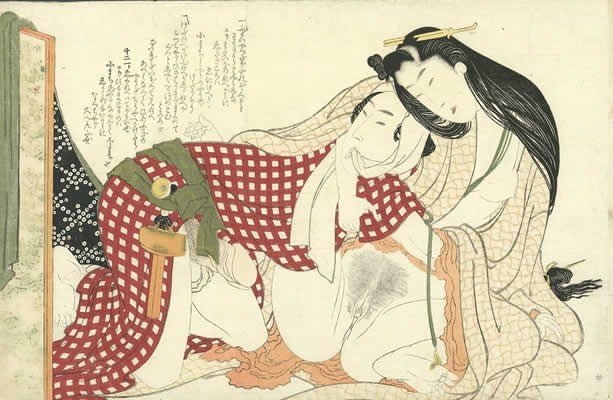