Su Hui was married to a major government official, and they were happy together for a time. But then her husband took a concubine. In her grief, Su Hui composed Star Gauge to express her love and to call her husband back.

The text she composed depends upon the fact that, unlike Western languages, Chinese can be read in any direction, not only because of the nature of Chinese characters, but also because characters can operate as any part of speech, depending on context. This fact gave rise to a genre in Chinese poetry of “reversible poems” (hui-wen shih), poems that can be read forward (from top right reading down) or in reverse. Su Hui’s text is the grandest example of this genre. It is a grid of 29 characters by 29 characters, which goes far beyond the simple “reversible” poem, for it allows readings in all directions: horizontal, vertical and diagonal.

The poem is especially striking and original in that it is not only a literary text, but a piece of visual art as well. In this case, the visual object is the very image of obsession. Below is a facsimile of the lost original:

The red section is made up of 7-character segments, all of which can be read in either direction. This is the armature of the poem, the structural feature that relates the poem to the armillary-sphere (the hsüan-chi of the poem’s title), an instrument used to gauge the movements of the stars. The meridians of the poem’s armature correspond to these rings of the armillary-sphere. The 7-character segments of the armature can be read in any order, so long as the reader follows the 7-character quatrain form. That is, at the end of each 7-character segment, which corresponds to a poetic line, you encounter a junction of meridians and can choose which direction to go. You can begin anywhere, and the poem ends after four lines have been chosen. This generates 2848 possible poems.

Text-blocks in the squares within the red armature make up the interior of the poem. Each color-region is read according to slightly different patterns. The poem length is either 6 or 12 lines. How it is read is limited only by the requirement that applies to all areas of the poem: the second line of every couplet must rhyme. Rhyme words are placed in this 6-character by 6-character grid so that the readings are all completely strange. For instance, one of the translations reads from top left horizontally to the right, then drops down a line and reads horizontally to the left, and continues snaking down the grid to end at the bottom right. Another possibility is the exact reverse of that reading.

Indeed, this is how Su Hui herself described the text: “… it lingers aimlessly, twisting and turning . . . .” There are at least 34 possible poems in this one text block. And the entire poem has something over 3000 poems! 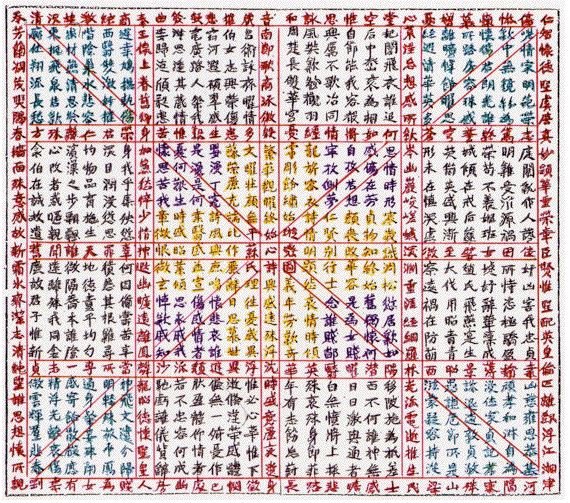