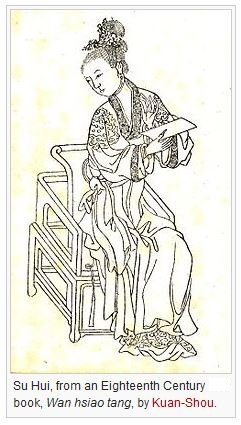 Su Hui (Fourth Century CE) was a Chinese poet of the Middle Sixteen Kingdoms period (304 to 439) during the Six Dynasties period. Her courtesy name is Yun Yan.

Su is famous for her extremely complex "palindrome" poem, apparently having innovated this genre, as well as producing the most complex example to date (her Star Gauge).

Su Hui is the earliest major female figure that survives in the written tradition. She is said to have created thousands of literary compositions, but as was typical for women poets in ancient China, they were virtually all lost.

Su Hui was married to a major government official, and they were happy together for a time. But then her husband took a concubine. In her grief, Su Hui composed Star Gauge to express her love and to call her husband back. When he read the poem, Su Hui’s husband sent the concubine away and rejoined Su Hui, their love deeper than ever.