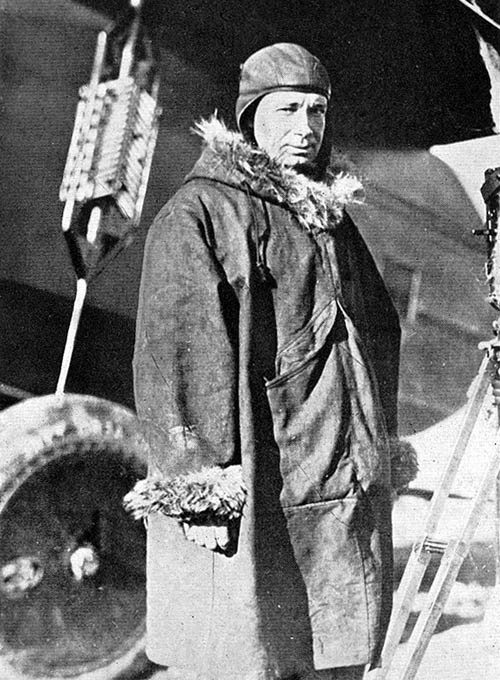 Sir Hubert Wilkins (1888-1958) is largely forgotten now. But back in the 1920s-1940s anyone with access to newspapers and radio certainly understood that he was a larger-than-life figure, a superhero explorer and aviator, so much so that the media kept track of his every activity.

Born in Australia, Wilkins enlisted with the Australian Flying Corps in World War I, and afterward served as photographer and naturalist in several polar expeditions. In 1926 and 1927 he commanded two expeditions to the Arctic.

A pioneer in the methods of air exploration, in 1928 he was the first to fly from North America to the European polar regions, and in a long flight of more than twenty hours, he succeeded in proving that there was not a continent under the arctic ice. He was knighted for that achievement.

In 1928-29, he commanded an expedition to the Antarctic. In 1931, in a submarine named Nautilus, he headed an under-ice expedition to reach the North Pole, and his work was to be very valuable for future Arctic exploration by submarine. From 1933 to 1938, he was manager for Lincoln Ellsworth's expeditions across the Antarctic continent.

During 1938, responding to official Russian requests, Wilkins searched for a group of Russian aviators lost in the Arctic. It was during this search that the attempts were made by him and Sherman to communicate by mental telepathy. During and after World War II, Wilkins served as a geographer for the British army.

Thus, in the years prior to World War II, Sir Hubert Wilkins was among the most preeminent and daring explorers of the world as it was back then. His exploits and reputation were secure in those contexts, and so there was little reason for him to mix into, of all things, telepathic experiments across vast distances………………

The following is from a description on Amazon which is quite helpful and explains things well.

“Harold Sherman was a researcher on the subject of ESP, and wrote many books in his writing career.

He earned his living by writing many football books for kids up to around 1950s. In the meantime, he was using himself as an experiment to research on ESP and power of mind.

He was not born with any unusual psychic abilities, yet with practice and research, he was able to tune his mind to read people's thoughts. I know a friend who knew Sherman in his later years, and said that Sherman could read people's thoughts, make coincidences happen, and several other ESP abilities. Sherman believed that ESP is something we all have, and that with practice we can use it more often in our life. 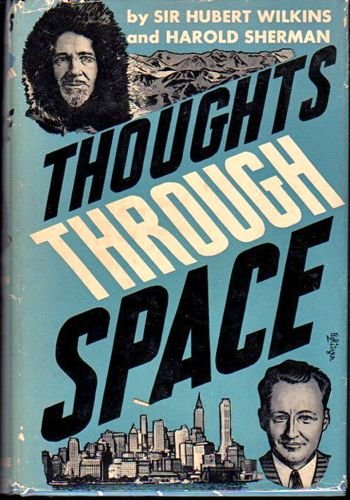 Thoughts through Space Studies in Consciousness was written in the 1930s, after Sherman did a pioneering long-distance telepathy experiment with Sir Hubert Wilkins. Wilkins went to the North Pole to search for missing Russian pilots, while Sherman stayed in New York.

Sherman ‘received mind transmissions’ daily about Wilkin's feelings, thoughts and conditions, and wrote them on paper. The reports were submitted to several testifiers of the experiment so that the reports could not be changed once submitted. There were no telephones, and when Wilkins returned to the USA to show his report and diary, an amazing 80% of Sherman's 'readings' of Wilkins adventure was accurate! This was such big news then that it was published in newspapers in those days.

Sherman has good techniques to help you train your mind to do this. And with practice, it gets easier and better. If you are interested, also get his book "You Can Make ESP Work For You", which describes his lifetime of adventures with ESP, which saved his life many times.

What is worth adding to this description is that the communication between the two of them consistently went on across 3,400 miles for no less than half a year.  Furthermore, when Wilkins arrived in the Arctic, he was assailed by urgent and very hazardous problems and rarely took the time to consciously send messages to Sherman in New York.  Despite this, or maybe because of the high level of emotion with which Wilkins accompanied his thoughts, his dated logbook showed striking agreement with Sherman's records of his contemporaneous mental impressions, when it was studied on Wilkins return.

Thoughts through Space - Foreward by Ingo Swann
There is no evidence in the book establishing that Wilkins ever actively took time to "send" telepathic information to Sherman who passively "received" what was sent. What he did do was to record events and details in his log, this being a usual habit with an explorer. When Wilkins returned from the Arctic, his dated log was compared with the dated impressions of Sherman.

The observations provide a selection of concurrences from the book.