Lori Schiller was a schizophrenic whose story is told in the book The White Room which was co-written by Amanda Bennet.  The story is quite harrowing, but it is so honest, that it is an absolutely indispensable record for anyone interested in this area.

Lori Schiller's family had a history of schizophrenia.  She started to have symptoms of schizophrenia in her teens.  Dr Jane Doller was Lori's psychiatrist in the final stages of the disease and helped her successfully gain control of her life....

From The Quiet Room – Lori Schiller and Amanda Bennett
Dr Jane Doller...
It is hard for any of us who have not experienced it to understand the internal desolation such a break [of the brain] must cause.  It must be worse than the worst experience of solitary confinement.  People with schizophrenia are locked out of the outside world, and locked inside their heads with nothing but these wild, out of control thoughts banging about inside.  For what has also broken is the brain's ability to process emotion and thoughts.  In people with schizophrenia, the normal emotions – that we all everyday categorise, process and either accept into our consciousness or push back into the recesses of our minds – run amok.  Emotions that would normally be comfortably catalogued as unacceptable, take on a life of their own as voices that seem more real than the real world outside. 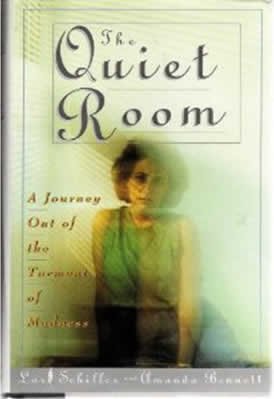 Overall Lori had the most appalling time trying to counteract the effects of her illness, but the effects she recorded in the book seem to point to exactly the same processes being used to obtain the hallucinations of schizophrenics, as those which are in place during dreams and visions.

The major differences are that, the hallucinations are uncontrollable and continuous, and without the stabilising effect of access to memory to help in rationalising the visions, the terror experienced and confusion can lead to a cycle of  continual 'bad trips'.

Thankfully drugs like clozapine 'closed the door of perception' to more manageable levels for Lori at least.  However as you will see from the Clozapine entry the drug is not without its own problems.