George William Russell, better known as AE (1867-1935), mystic, poet, painter, journalist, editor, and practical rural economist, was a pivotal figure in the Irish literary revival and in the emergence of modern Ireland.

From the beginning of the twentieth century he formed life-long friendships with W. B. Yeats, George Moore, Lord Dunsany, James Stephens, Stephen Mackenna (translator of the Enneads of Plotinus), James Joyce, and other writers, thinkers, and artists, and was closely associated with the Irish National Theatre Society (later the Abbey Theatre).

From what one can judge, AE was a natural mystic, but there are also incidences of very specific experiences and one of them is related to his lying on plants [communing with nature] !

It was probably in mid 1884 that, in the words of Henry Summerfield's biography, Russell quite suddenly began to experience waking dreams of astonishing power and vividness which seemed to be thrust into his consciousness by a mind which was not his. Images of cosmic happenings and other worlds overwhelmed him with a majesty far removed from anything of which he was aware in his own being.  He said:

I remember how pure, holy and beautiful these imaginations seemed ......how they came like crystal water sweeping aside the muddy current of my life....The visible world became like a tapestry blown and stirred by winds behind it. If it would raise but an instant I knew I would be in Paradise. 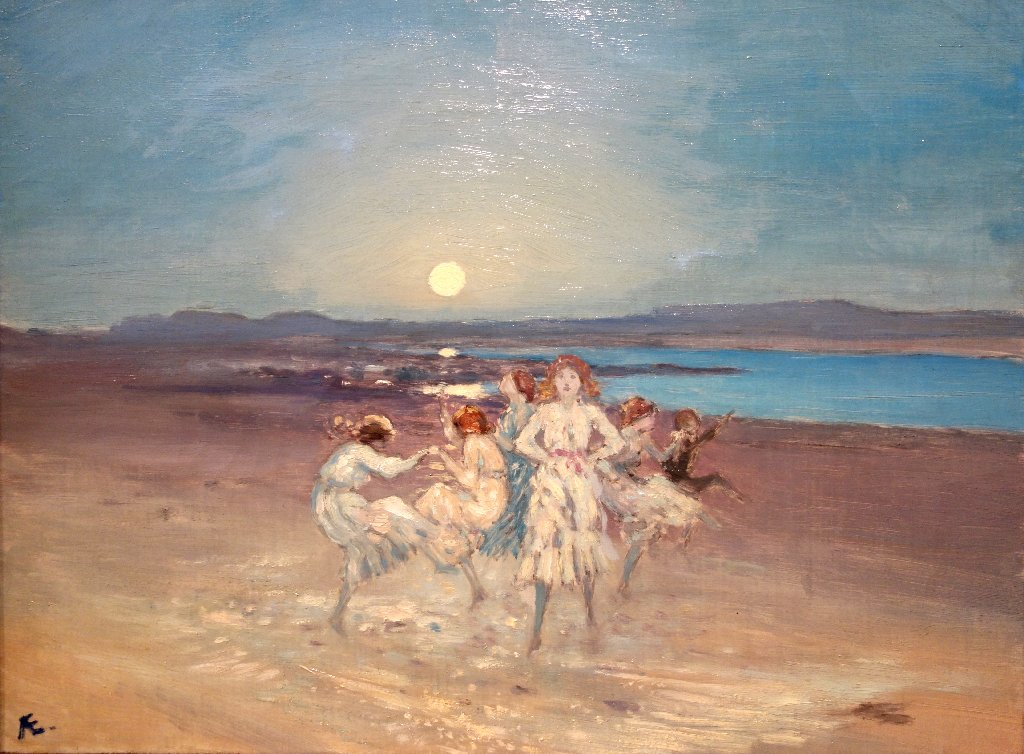 A few years later came the event that turned him into a seer of visions, as one summer day he lay on Kilmasheogue, one of the hills just south of Dublin, when with great intensity he felt the presence of supernatural beings. Then

the heart of the hills was opened to me, and I knew there was no hill for those who were there, and they were unconscious of the ponderous mountains piled above the palaces of light, and the winds were sparkling and diamond clear, yet full of colour as an opal, as they glittered through the valley, and I knew the Golden Age was all about me, and it was we who had been blind to it but that it had never passed away from the world.

A.E.’s and Yeats’s interests in these other worlds led to Madame Blavatsky’s Theosophical Movement.

Russell …. was far from being great in painting, poetry, criticism ; yet he was undoubtedly a great man; a triumphant proof of the idea that so long as a man guards against intolerance and anger, it is better to believe in too much than to believe in too little. He was one of those who seem to spend a life with us almost in innocent bewilderment, because they come from some larger, nobler race. He had some economic and political ideas that are not behind our time but ahead of it; he proved himself a more practical man than the hard-headed realists; and during the years when Ireland was at war with the British Government and then with herself it was to this seer, this poet and painter of gods, demigods, angels, fairies, that men turned in the dark and confusion, aware then of his strength, his steadfastness.
One of his favourite beliefs was that in this age we have disinherited ourselves. As he wrote to a friend: 'We have imagined ourselves into littleness, darkness and ignorance, and we have to imagine ourselves back into light.' That was thirty years ago; nothing much has happened since to prove he was wrong.