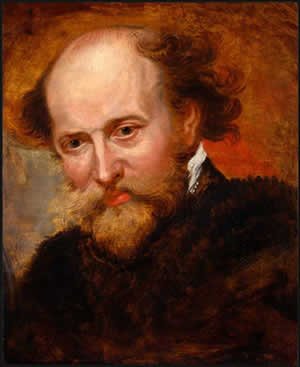 Peter Paul Rubens (1577 – 1640), was a Flemish painter, and a proponent of an extravagant florid style that emphasised movement, colour, and sensuality. His ladies are wonderfully big and bumptious, full of the joys of... well, you can guess.  He is well known for his altarpieces, portraits, landscapes, and history paintings of mythological and allegorical subjects.  His style is termed by art historians as 'Baroque', which actually means a bit over the top.

For most of his life Rubens was not what one might term an inspired painter.  He is technically excellent, was very popular with patrons, had a very distinct style that sold well, but there is no sense of the infinite or the spiritual anywhere in his works.  I find them fun, but not particularly inspiring.  Commercial art.  But it changed quite late in his life, and we will see why as we trace what happened to him.  First let us look at the commercial painter.

Rubens for most of his life was both a diplomat and painter.  He did not, in fact, spend much time at home.  In 1603, for example,  Rubens travelled to Spain on a diplomatic mission delivering gifts from the Gonzagas to the court of Philip III.  This journey marked the first of many during his career that combined art and diplomacy. Between 1627 and 1630, Rubens's diplomatic career was particularly active, and he moved between the courts of Spain and England in an attempt to bring peace between the Spanish Netherlands and the United Provinces. He also made several trips to the northern Netherlands as both an artist and a diplomat.

Rubens only returned to Antwerp in 1608 upon hearing of his mother's illness.  In the end,  she died before he arrived home, but he decided to use Antwerp as his base, as his return coincided with a period of prosperity in the city. In 1609, he married Isabella Brant, the daughter of a leading Antwerp citizen.

His clients were the aristocracy and the Catholic church.  As a consequence he painted altarpieces and portraits in large quantities.   In September 1609, for example,  Rubens was appointed as court painter by Albert VII, Archduke of Austria and Infanta Isabella Clara Eugenia of Spain, sovereigns of the Low Countries. 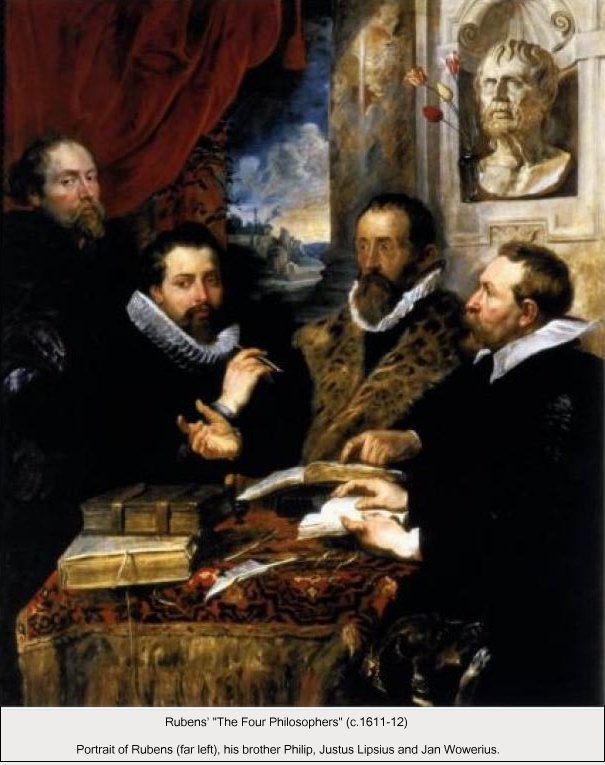 His work was of course technically excellent, made him plenty of money and earned him a formidable reputation, but many of his paintings may not in fact have been his, but were produced in his 'style' by his students. He was extremely clever at building a sizable client base, establishing an international reputation with collectors and nobility abroad which his workshop [and all its students and apprentices] worked to satisfy.  The style was his, the paintings often weren't.  His students were often extremely competent painters.  His most famous pupil was the young Anthony van Dyck.   Even when he was away on diplomatic missions, his workshop continued to paint monumental paintings for local patrons in Antwerp and abroad.

“Paintings can be divided into three categories: those he painted by himself, those he painted in part (mainly hands and faces), and those he only supervised. ... He also often sub-contracted elements such as animals or still-life in large compositions to specialists such as Frans Snyders, or other artists such as Jacob Jordaens”.

He was also not averse to copying other artist's work.  The Raising of the Cross, for example, used Tintoretto's Crucifixion for the Scuola Grande di San Rocco in Venice and Michelangelo's dynamic figures.  Rubens was in Madrid for eight months in 1628–1629. Whilst there he studied Titian's paintings, copying numerous works.

Rubens in the end ran a very major business.  He had a workshop and house in Antwerp, a personal art collection and library, both among the most extensive in Antwerp.  He owned several houses.  He was also a big employer.  He left printmaking to specialists, such as Lucas Vorsterman and he recruited a number of engravers, who he carefully schooled in 'the more vigorous style he wanted'. Rubens was also no slouch when it came to business matters.  He established copyright for his prints, most significantly in Holland, where his work was widely copied through prints. In addition he established copyrights for his work in England, France and Spain.

So he could paint, but he was not a painter, he ran a business – the 'Rubens company', which produced paintings in the style of Rubens.  But all this was to change.

In 1630, four years after the death of his first wife, the 53-year-old painter married 16-year-old Hélène Fourment. It changed his life.  From this point on his works were inspired.  No more copying, no more painting by numbers, these paintings came from the heart.  Hélène inspired the voluptuous figures in many of his paintings from the 1630s, including The Feast of Venus (Kunsthistorisches Museum, Vienna), The Three Graces and The Judgment of Paris (both Prado, Madrid). 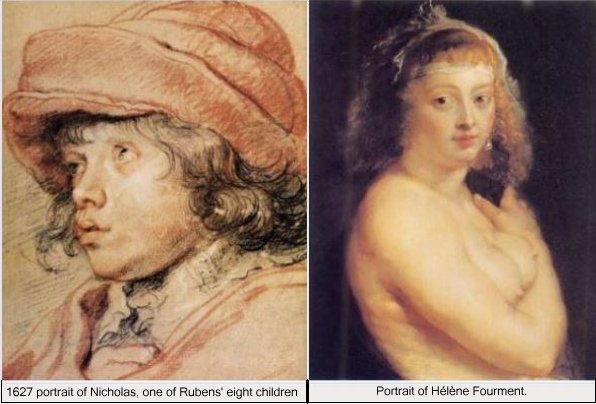 And somehow he mellowed and started to enjoy life more.  In 1635, Rubens bought an estate outside of Antwerp, the Steen, where he spent much of his time. He started to paint landscapes, such as his Château de Steen with Hunter (National Gallery, London) and Farmers Returning from the Fields (Pitti Gallery, Florence), which are more personal and intimate.  We now have an artist, not just a painter.

Rubens died from heart failure, which was a result of his chronic gout, on 30 May 1640. He was interred in Saint Jacob's church, Antwerp. The artist had eight children, three with Isabella [17 years of marriage] and five with Hélène [10 years of marriage]; his youngest child was born eight months after his death.

We might conclude from this that Rubens became inspired once he really started making love.  But sadly I think the gout is a tell-tale sign.  Gout is the sign of a wine drinker, but it was also a sign of lead poisoning.  Rubens was yet another victim of lead based paint and lead drunk from vessels that leached lead.  It may also be worth adding that at least two sources I used, concluded he was a left hander.

At a Sotheby's auction on 10 July 2002, Rubens's newly discovered painting Massacre of the Innocents sold for £49.5 million ($76.2 million) to Lord Thomson. It is a current record for an Old Master painting.