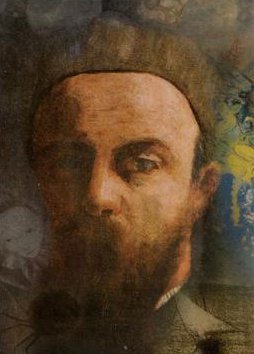 Odilon Redon, true name Bertrand-Jean Redon; [April 20, 1840 – July 6, 1916) was born in Bordeaux, Aquitaine. Redon acquired the nickname "Odilon" from his mother, Odile.   Redon was a French symbolist painter, printmaker, draughtsman and artist in pastels who was greatly influenced by both Hindu and Buddhist religion and culture, as well as Japanese culture. He remained relatively unknown until the appearance in 1884 of a cult novel by Joris-Karl Huysmans titled À rebours. The story featured a decadent aristocrat who collected Redon's drawings.  The mystery and effect of Redon's drawings are described by Huysmans in the following passage:

"Those were the pictures bearing the signature: Odilon Redon. They held, between their gold-edged frames of unpolished pearwood, undreamed-of images: a Merovingian-type head, resting upon a cup; a bearded man, reminiscent both of a Buddhist priest and a public orator, touching an enormous cannon-ball with his finger; a spider with a human face lodged in the centre of its body. Then there were charcoal sketches which delved even deeper into the terrors of fever-ridden dreams. Here, on an enormous die, a melancholy eyelid winked; over there stretched dry and arid landscapes, calcinated plains, heaving and quaking ground, where volcanoes erupted into rebellious clouds, under foul and murky skies; sometimes the subjects seemed to have been taken from the nightmarish dreams of science, and hark back to prehistoric times; monstrous flora bloomed on the rocks; everywhere, in among the erratic blocks and glacial mud, were figures whose simian appearance—heavy jawbone, protruding brows, receding forehead, and flattened skull top—recalled the ancestral head, the head of the first Quaternary Period, the head of man when he was still fructivorous and without speech, the contemporary of the mammoth, of the rhinoceros with septate nostrils, and of the giant bear. These drawings defied classification; unheeding, for the most part, of the limitations of painting, they ushered in a very special type of the fantastic, one born of sickness and delirium."

A telling source of Redon's inspiration and the forces behind his works can be found in his journal A Soi-même (To Myself):

"I have often, as an exercise and as a sustenance, painted before an object down to the smallest accidents of its visual appearance; but the day left me sad and with an unsatiated thirst. The next day I let the other source run, that of imagination, through the recollection of the forms and I was then reassured and appeased."

Redon calls it imagination, but imagination is the process that follows inspiration, so in effect Redon relied almost exclusively on inspiration.  He also shares Felicien Rops ability to shock a little, but by different means, although the objective is the same:

"My drawings inspire, and are not to be defined. They place us, as does music, in the ambiguous realm of the undetermined."

His imagination found an intellectual catalyst in his close friend, the Symbolist poet Stéphane Mallarmé.  Redon also became friends with the botanist Armand Clavaud who introduced him to the theories of naturalists like Lamarck and Darwin, as well as the research work of Pasteur on microbes.

So what was Redon’s source of inspiration?

In the first place he was born with talent.  Redon started drawing as a child and by the age of ten was already being awarded drawing prizes at school. He began the formal study of drawing at fifteen, briefly studied painting at Paris’ École des Beaux-Arts under Jean-Léon Gérôme and was taught engraving by Rodolphe Bresdin.  Redon learned lithography under Henri Fantin-Latour.

But his paintings and etchings waver between the joyous and colourful to the truly bleak and disturbed, which means that even if he was not a manic depressive, his life wavered between bouts of very deep depression and other times of elated highs.

The dark troughs in his life appear to have started when in 1870 he joined the army to serve in the Franco-Prussian War.  During the war, Redon was an active soldier and took part in the engagements on the Loire. At the end of the war, he moved to Paris, and started working almost exclusively in charcoal and lithography. He called his work, conceived in shades of black, his noirs. Black dog days.

Redon’s father died in 1874 leaving his family with no money. Redon described the following years, from 1875 to 1880, as the " most distressed period " of his life, the true Black days.  The subject of the Prisoner often appears in the works of this time, appearing sometimes behind the bars of a window or isolated in a nightmare or a daydream, or even a hellish hallucination. Redon was able to express the horrors he was going through with ease, but when he tried to execute other lighter projects, for example, a succession of lithographs inspired by Pascal, he was unable to do so.

Redon produced nearly 200 prints, beginning in 1879 with the lithographs collectively titled In the Dream. He completed another series (1882) dedicated to Edgar Allan Poe, whose poems had been translated into French with great success by Mallarmé and Charles Baudelaire. Rather than illustrating Poe, Redon’s lithographs are poems in visual terms, themselves evoking the poet’s world of private torment, with winged demons and menacing shapes.

Redon’s association with these poets may not have been an entirely helpful one in some ways.  Both Baudelaire and Mallarme were heavy users of absinthe and drugs.  Odilon was later to paint a picture called The Green Death, which according to one biographer is

"…an allusion to the drink Absinthe which was associated with inspiration, excess and fantastical mental states. Here, the ‘green death’ could be the death of reason under the influence of intoxication, or the suspension of conventional patterns of thinking and feeling during visionary, artistic experiences." 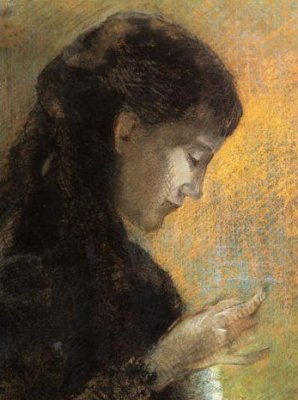 In 1880, Odilon Redon married Camille Falte, a young Creole from the Bourbon Islands, whom he had met in the aristocratic salon of Madame de Rayssac. The honeymoon took place in Brittany and suddenly things started to change.  Odilon Redon made his first pastels. Even after that first flush of love and passion, Odile and Camille stayed happy.  Camille helped him by dealing with art dealers and day to day problems, whilst he was left in peace to paint.

In the 1890s pastel and oils became his favoured media and he produced no more noirs after 1900. By 1899, he was exhibiting with the Nabis at Durand-Ruel's in a riotous display of colour.  From the depths of depression, Redon emerged with a love of flowers, nature and women.  He painted an enormous number of simple paintings of vases of flowers - sensitive floral studies, and heads that appear to be dreaming or lost in reverie. He developed a unique palette of powdery and pungent hues - the contrast with his black days could not have been more startling. 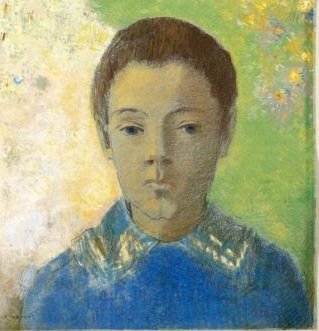 But, this time is not without further black periods.  In 1884, his brother Léo and his sister Marie died within a short space of each other and in 1885 his great support and mentor Bresdin died.  To make things even worse, in 1886 his first son Jean was born on May 11th, but died on November 27th.

The pain of these events plunged him into a desperate period of melancholy leaving him in a crisis which remained with him until the birth of his second son.  Arïe was born on April 30th 1889. 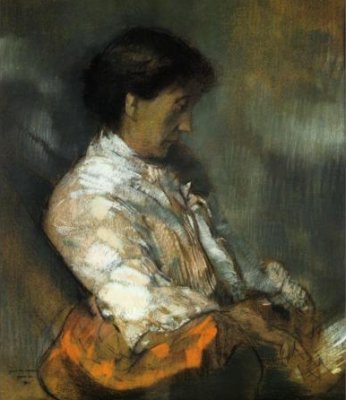 And so with the help of Camille he managed to emerge, battered but with a new found urge to create mystical paintings, with themes of creation and spirituality, incorporating images of Buddha, meditation and dream like sequences.  He drew an extraordinary number of compositions having Apollo with his chariot in clouds with rearing horses, as if the experiences of grief had plunged him into an abyss from which he was being dragged by wild horses.  The overall impression these paintings provide is that he was being taken on a roller coaster ride of emotion.  And things were not to change.

By 1890, closer contacts with other artists like Gauguin, Vuillard and Bonnard had helped to give him a new impetus.  But then came a new blow.  His close friend the botanist Armand Clavaud committed suicide on December 1st. Redon was devastated by the news.  He completed a series of paintings showing Closed Eyes in memory of all those he had lost whom he could no longer see.  In 1891, Redon published the Dreams, dedicated to Armand Clavaud who had so much contributed to form his thought.

After the departure of Gauguin, Redon took his place as the principle lead in the Nabis group. Maurice Denis’s painting " the Homage to Cézanne ", shows Redon surrounded by young Nabis artists. Denis said that Redon “determined in a spiritualistic direction the evolution of art in 1890 ".
But despite the leadership he showed others, Redon confided in a letter to Emile Bernard in 1895 that: "... although I forsake the black more and more. Between us, it exhausted me a lot ".

Redon and Mallarmé worked together all the winter of 1897-1898 to produce a collaborative work of four series of lithographs, but Mallarmé died on September 9th, 1898 and Redon stopped his work.

Redon continued to work on murals, tapestries, stained glass, and paintings throughout the rest of his life. He started a garden where he grew the flowers used in his flower paintings.  In 1909, he rented a beautiful villa, the Juliette’s villa where from that point on he spent his summers. And there at last, the painter found calm and peace and started again to paint landscapes and large trees.

In 1903 Redon was awarded the Legion of Honor. His popularity increased when a catalogue of etchings and lithographs was published by André Mellerio in 1913.  Redon died on July 6, 1916 aged 76.  The " Virgin ", an oil on canvas was left unfinished.