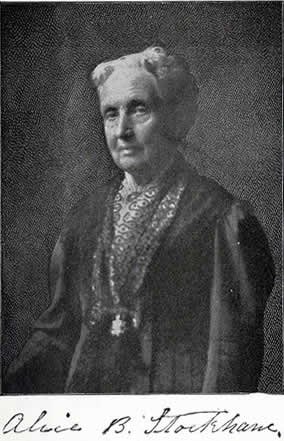 Alice Bunker Stockham (1833 - 1912)  was an obstetrician and gynaecologist from Chicago.

Stockham was born on the American frontier, which, at that time, included her native Ohio. She grew up in a log cabin in close proximity to Native American Indians, whom she regarded with great respect. She became one of the first five US women doctors when she graduated from the only institute of higher learning in the West to admit women.

She married a doctor and they had two children.

She promoted gender equality, dress reform, [Stockham lectured against the use of corsets by women],  birth control, and male and female sexual fulfillment for successful marriages.   Ultimately she founded her own publishing company to publish forward-thinking works. Stockham was also a multi-faceted reformer. She practiced homeopathy, served as a trance medium, and was an active suffragette.

A well-traveled and well-read person who counted among her friends Leo Tolstoy and Havelock Ellis, she also visited Sweden and from her trips to schools there she brought back the idea of teaching children domestic crafts, thus single-handedly establishing shop and home economics classes in the United States.

Alice Stockham was a Quaker [itself a mystic movement] and her writing is imbued with knowledge of the spirit, of soul, and of a complete sense of the existence of a spiritual world. As a Quaker, she advocated complete abstinence from alcohol and tobacco.

But perhaps of most importance for this site, is that her books promoted the use of love making as a means of achieving spiritual experience of the most profound sort. 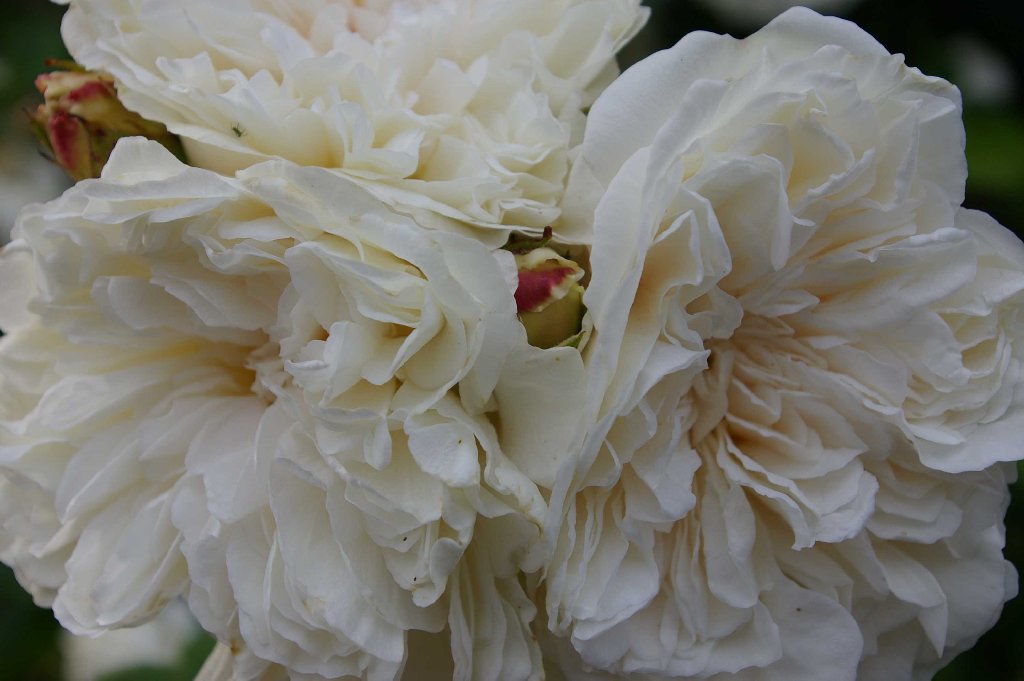 When someone is able to write with such clarity on the effects of love making in the manner she proposed - essentially sexual stimulation - you know that they have had practical experience of both the approach and the effects.  Alice Bunker Stockham was not only an enlightened person, but a very advanced enlightened person on the spiritual path.  And the way Alice Bunker Stockham gained enlightenment was via sexual methods - love making.

In the physical union of male and female there is soul communion, giving not only supreme happiness, but in turn conducive to soul growth and development. 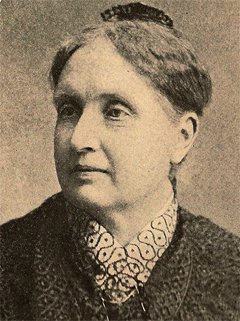 Stockham traveled to India where she visited a matrilinial caste of hereditary warriors, allegedly of Brahmin descent, on the Malabar Coast. Known as "the free women of India," Nayar women were intelligent, well-educated, and all property descended through them. They controlled the business interests and chose their own husbands. It has been speculated that it is there that she may have learned about tantra - on which karezza is based.

For those who were not spiritually minded, Alice provided practical help.

Tokology (Greek for "Obstetrics") was written for lay readers.  It covered all aspects of women's and children's health and was far ahead of its time. For example, she recommended natural childbirth, eating a high-fibre diet and exercising during pregnancy to promote a pain-free childbirth.  Tokology was translated into French, Finnish, German and Russian (with a forward by Leo Tolstoy).

Stockham was very concerned with the economic plight of divorced women with children, and prostitutes who wanted to get off the street.  She felt that these women had no marketable skills and would be unable to support themselves, so she had copies of her book "Tokology" privately printed and gave them to "unfortunate women" to sell door-to-door in Chicago. 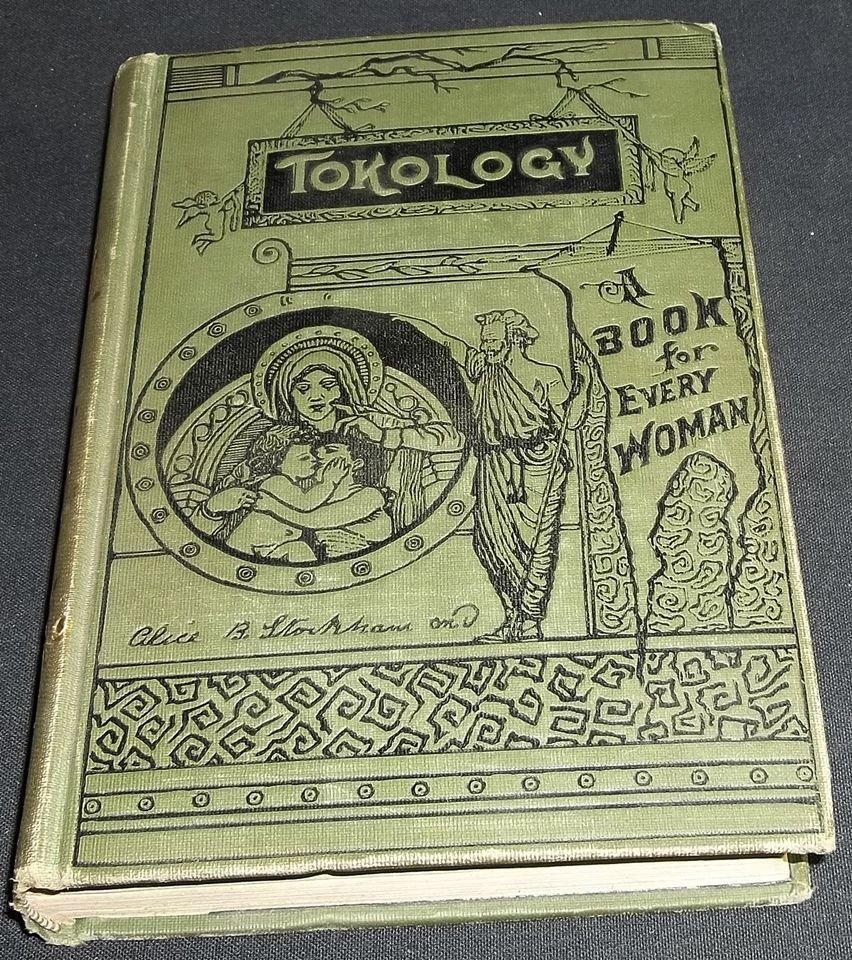 Each copy came with a bound-in certificate signed by Stockham and entitling the bearer to a free gynaecological examination.

Fear and anxious thought, far more than bacilli or bacteria, are productive of pain, disease and suffering. The terrors and dread of childbirth, the horrors of undesired maternity, have been potent factors in causing the weakness and the suffering of women.
To know that childbirth is natural, and that under harmonious conditions it is not attended by suffering, removes a great curse from the lives of women. To know that the inherent desire for maternity is to be fulfilled under the best conditions and entirely at her own command, is a wonderful boon to woman.
If, on the other hand, women are resigned to conditions that they deem unavoidable, and patiently pay in frequent childbirths what they consider the penalty of their sex, they become little more than breeding animals.

Alice coined the term Karezza (from the Italian for "caress") and authored a book by this name in 1896. It refers to non-religious but  spiritual sexual practices that “draw upon tantric techniques of body control but do not involve any of tantra's cultural or iconographic symbolism”.

She promoted Karezza as a means to achieve: 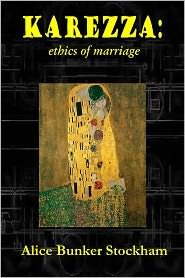 Alice Bunker Stockham - Karezza, the Ethics of marriage
KAREZZA gives a high ideal to parental functions; pleads for justice to the unborn child; teaches that the control of procreation is possible with every husband and wife; gives honor to womanhood, and, most of all, controverts the prevailing ideas of baseness and degradation associated with the sexual nature.
KAREZZA may be considered a supplement of TOKOLOGY, and like that, does not deal with ideals, but with tested theories and practical truths. They have been lived and demonstrated, and are here presented to the reader as living facts.

Stockham's method required that men refrained from ejaculation, but women were encouraged to have contractive orgasms at will. In later writings she also began to promulgate the need for women to learn to control their orgasm responses in the same way that the men did. Stockham rejected the "Male Continence" techniques of John Humphrey Noyes in favour of gender parity in orgasm control. She also rejected Noyes' polyamorous ideas and promoted Karezza as a way to strengthen marriage and monogamy - in some senses human union as a mirror of spiritual union. 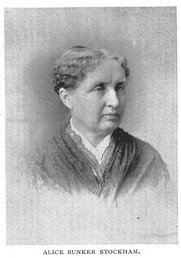 This is from Wikipedia:

Stockham's gender-parity version of tantra yoga, serves as an important counter-point to the male-centered aspects of traditional tantric sexual practices and later variants such as the "sex-magick" of Aleister Crowley. In the field of Sex Magick, the only practice that is similar to Karezza as far as the sex act is concerned is Samael Aun Weor The Perfect Matrimony; otherwise, they diverge as far as doctrine is concerned.  She saw Karezza as a way to promote health and happiness in marriage. The emphasis was on selflessness in lovemaking, gentle, harmonious passion leading to sublime spiritual delights.

Tantric yoga does not have to be 'male-centred'.  Furthermore, Sex Magick need/should also not be male-centric.  On this site I have described Sex magick as it should be executed - as a step on the way to full sexual stimulation methods.

Aleister Crowley was a magician and indeed considerably adapted the methods to suit himself.

Alice was a mystic, whose motivation was love for her fellow human beings and a much deeper understanding of the spiritual experiences that are possible. 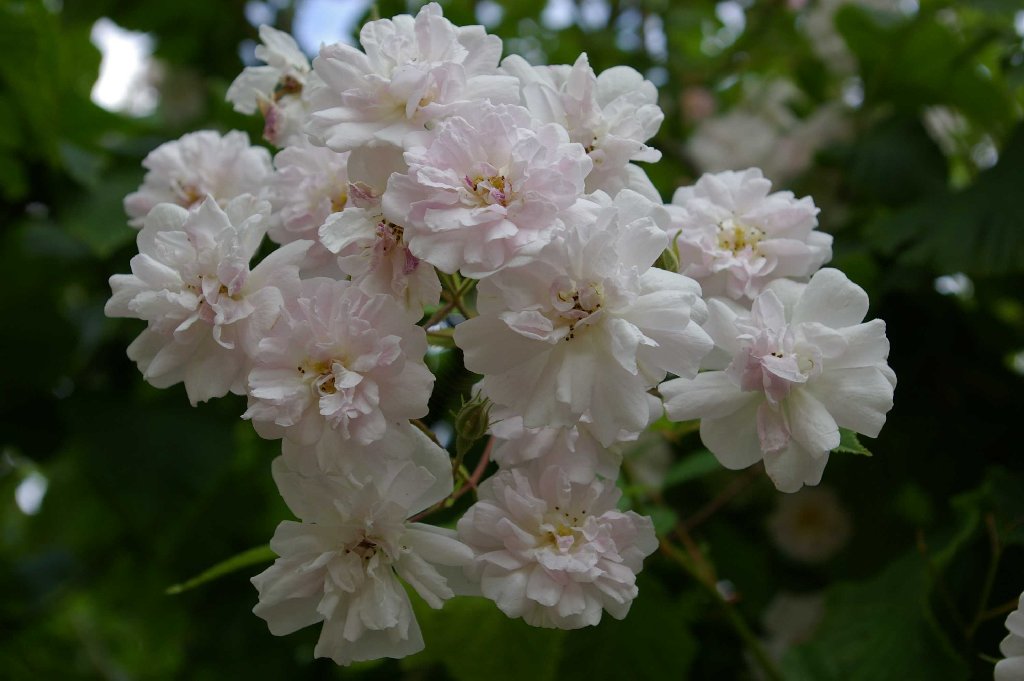 Karezza – Ethics of Marriage 1903 second edition – Dr Alice B Stockham
Karezza signifies “to express affection in both words and actions,” and while it fittingly denotes the union that is the outcome of deepest human affection, love’s consummation, it is used technically throughout this work to designate a controlled sexual relation.
The law of Karezza dictates thoughtful preparation, even for several days previous to the union. Lover-like attentions and kindly acts prophesy love’s appointed consummation. These bind heart to heart and soul to soul. There should be a course of training to exalt the spiritual and subordinate the physical. This is accomplished through reading and meditation. The reading should lead to exaltation of spirit, and to the knowledge of the power and source of life.

Despite the many benefits of Stockham's approach, including granting couples the ability to choose opportunities for parenthood without contraceptives, neither the Vatican nor the right wing Christians in the USA  liked Karezza or its relatives. 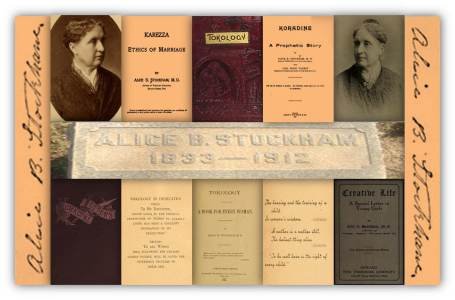 Anthony Comstock, who with Morris Ketchum Jessup, established the ‘New York Committee for the Suppression of Vice’ succeeded in getting the  Comstock Act into law under which a variety of spiritual marriage reformers including Stockholm, Paschal Beverly Randolph and Ida Craddock, were jailed.  Craddock committed suicide after being repeatedly jailed for allegedly peddling ‘pornography’.

America, land of the free. 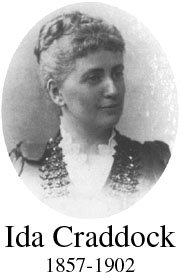 Forty years after Stockham's death in 1912, the Sacred Congregation of the Holy Office issued a moratorium, citing an express mandate of Pope Pius XII. It noted that several contemporary writers, in discussing married life, had described, praised, and even ventured to recommend something they termed "a reserved embrace," and forbade priests and spiritual directors ever to suggest that there was otherwise.

"...that every attempt of either husband or wife in the performance of the conjugal act or in the development of its natural consequences which aims at depriving it of its inherent force and hinders the procreation of new life is immoral and that no 'índication' of need can convert an act which is intrinsically immoral into a moral and lawful one.  ………..The precept is in full force today, as it was in the past, and so it will be in the future also, and always, because it is not a simple human whim, but the expression of a natural and divine law."

Which as we know [or should know] is cobblers.

The observations I have extracted provide a flavour for the full Karezza system, however, the book, which is very easy to read and quite short can be downloaded in PDF form or read online via this LINK.  If this link subsequently fails, a search using the terms 'Karezza Stockham ad PDF' will yield a number of options.

Let all children of men listen for these messages.

Let them go into the hush of the spirit and wait in the night stillness for the revelation.

It may come in the fire of a poet or the eloquence of an orator, but certainly if souls are attuned to life's harmonies the law will be fulfilled in song and prophecy.

This silence is not mere silence of sound, but even thought is hushed, the eyes forget to see and the ears forget to hear, only spirit listens to spirit.

In this ecstatic stillness the problems of the philanthropist are solved; the sculptor's marble glows with life; the painter's canvas reflects love and intelligence; while the desires of each are lifted to the highest and truest expressions of the soul, expressions that shall hasten the universal brotherhood of man.

A poet as well.