The Witham Shield is according to historians an Iron Age decorative bronze shield facing of La Tène style, dating from about the 4th century BC. The shield was discovered in the River Witham in the vicinity of Washingborough and Fiskerton in Lincolnshire, England in 1826. Further excavations at a nearby site have revealed posts interpreted as the foundation for a causeway, as well as artefacts including a sword and spears. The shield now resides in the British Museum.

As we know from symbolism, all these are the symbols of the ‘Knight’ and although superficially the decoration on the shield appears to be Celtic, the symbolism is entirely Pictish.  Thus we may have proof here that some Picts in their migration from the north settled here in Lincolnshire bringing their beliefs,  sacred geography and symbols with them.  The supposed forts and enclosures, causeways and ‘round houses’ are just the same as the crannochs, brochs, and similar structures of the Picts.  And indeed further south deep into the Fens ‘mirrors’ have been found.

One suspects the dating of the shield, as the surrounding archaeological sites are all contemporary with the Picts and the Ancestors.

The following description comes from the British Museum, and we have added some explanatory notes to each paragraph showing the symbols and meaning.

The photo shows the copper alloy decorative front of the shield, originally fixed to a wooden or leather back. The shield has two roundels, a central spine and boss with La Tène decoration. The shadow of the shape of a boar remains as a different colour in the patina on the front of the shield.

This cannot be seen in the photo to the left, but is clealry shown in the reconstruction of the shield in the museum. 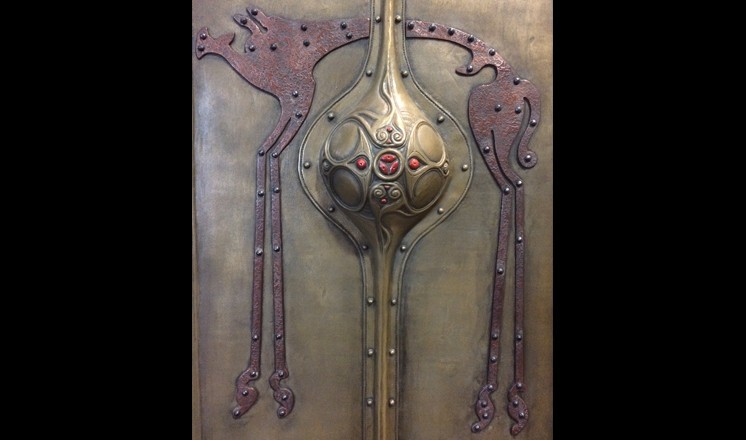 The overall design shows where he was from.  Somewhat like a motorway signpost, the symbol is as if one was looking at a plan of a site - three buildings joined by causeways, all in a straight line.  They show a central main building and two outlying stone circles with ditches.  His home would thus have been similar to that shown below, all these arrangements were designed to concentrate the earth energy needed to obtain the spiritual experiences.  They also of course mirrored the overall symbolism found for the cosmic egg - earth, water, air, fire and the unmoving mover.  Since the Fens overall was a wet sometimes marshy area, it would have been far simpler to incoporate the necessary moat [water] island, and so on 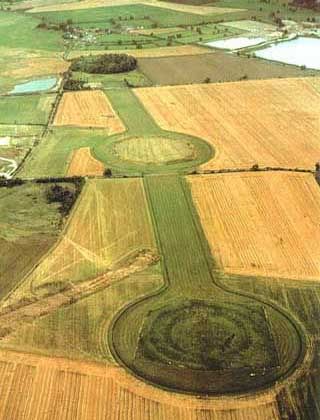 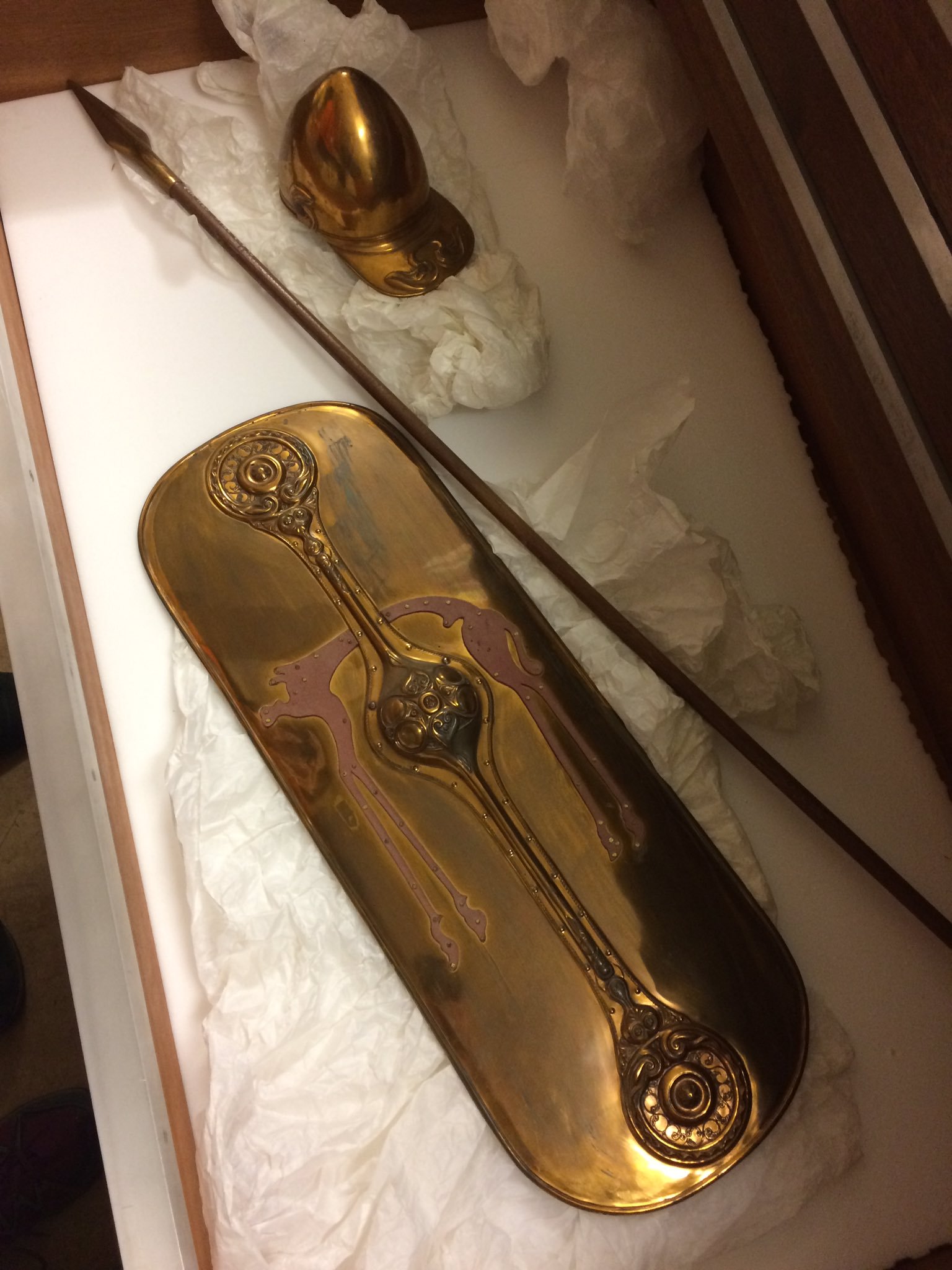 The body of the shield is made up of two metal plates with a U-section binding around the edge. The spine and end roundels are attached by rivets through the metal plates. The protruding length of these rivets from the back of the plates suggests that the original wood or hide backing was 6 mm thick. Domed washers held the rivets in place at the back. 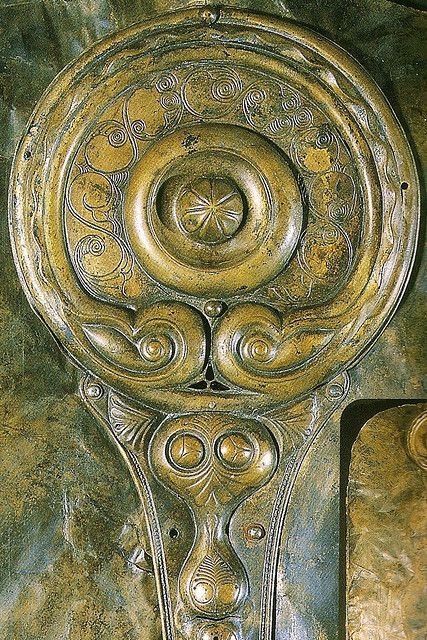 The upper end roundel is damaged, but the lower end roundel [see left] is complete and retains its central roundel with dished centre which has a raised rosette design.

Around the outer part of each roundel is a decorative design made up of a repousse, wavy, raised line which ends in a pair of comma-shaped recesses, each of which encloses a 'snail-shell' boss with a tail. At the junction of each boss with the central spine is what appears to be an abstract animal head design.

The design is formed by a pair of domed 'eyes' decorated with an engraved triangle dividing each circle into 3 zones. An elongated bulbous 'snout' extends away from the roundel along the spine. This and the area near the 'eyes' is decorated with engraved lines that give the appearance of 'wrinkles'. Either side of the 'head' nearest the 'eyes' are a pair of palmettes.

Delicate scroll ornament is engraved some way from the end of the 'snout' along the spine and the edge of the central spine has a border of a raised zig-zag motif within a groove.

This a depiction of the cosmic Egg, meaning the henge was designed to mirror the cosmic egg - Earth, Water [wavy line], Air and Fire [billowing pattern].  The seven petals in the central boss represent the symbolic planets.  We have provided a link to show how this works symbolically.  The Guardian at the entrance is probably the Boar clan to which this knight belongs, with either its ears or [less likely] a pair of small wings. 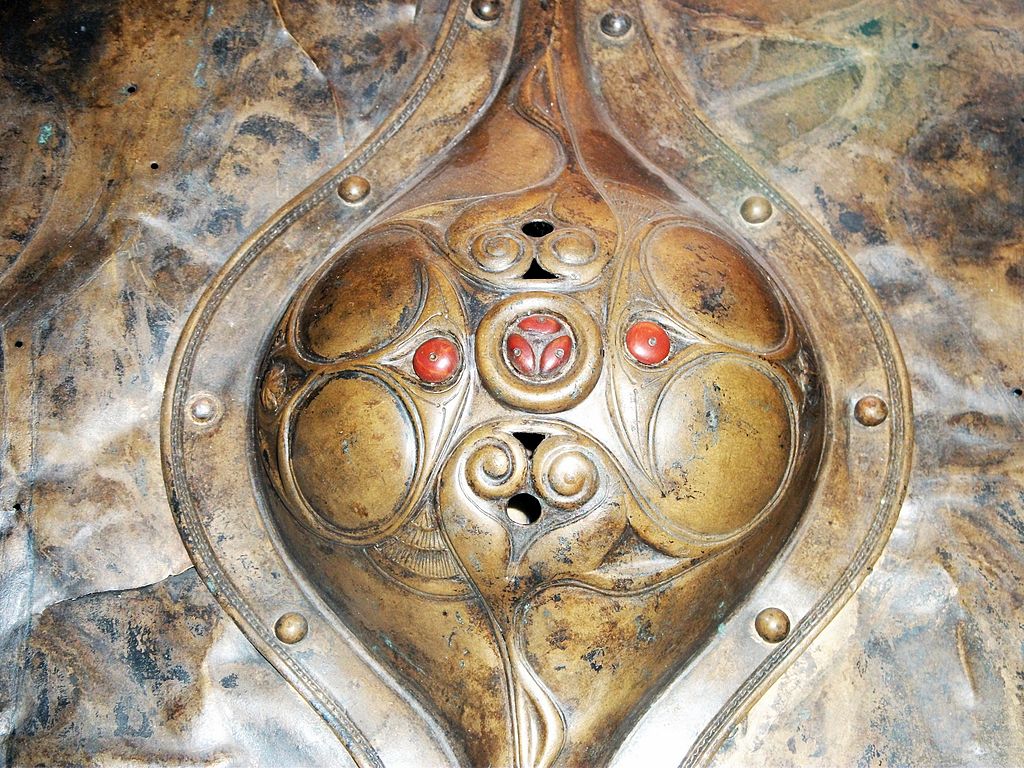 The oval boss is richly decorated with repousse ornament. This consists of two design complexes, one on either side of a diagonal axis.

Each has a pair of circular areas to one side which are enclosed by ridges. In the angles formed at the intersection of these is a rosette on the outer side and a coral stud on the inner side. These ridges are connected by 'snail-shell' bosses with a tongue that extends along the central spine.

The four circles are again the 4 Elements, but it shows a different design of building.  The centre with its very precious coral shows the Trinity of the Unmoving mover .  This building must have been very sacred as two henges leading by a causeway to an immensely sacred central 'palace' is an exceptional site.  Thus as knights go, he must have also been a most important knight.
It is worth adding that important knights such as this one existed right up to the Middle Ages. For example, the Manor of Scrivelsby, part of Scrivelsby civil parish, is in the East Lindsey district of Lincolnshire, it is not that far from Washingborough.  The manor is still held by grand serjeanty, a form of tenure which requires the performance of a service rather than a money payment – in this case as the King or Queen's Champion.

Right:  The Witham Shield - Drawing of the shield made in 1863 by Orlando Jewitt in John Kemble's book Horae Ferales, clearly showing the long-legged boar