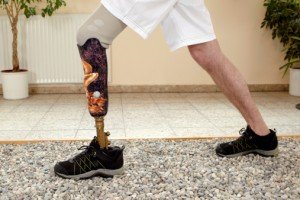 Hallucinations can be caused by damage to various parts of the brain or the nervous system itself.  Damage to the eye or damage to the optic nerve or sight processing areas of the brain, for example, can cause hallucinations of a visionary sort.  The absence of any signal from the organ or from the function of sight causes the perception system to seek images from elsewhere.

A phantom limb is an hallucination.  It is the sensation that an amputated or missing limb is still attached to the body – is ‘there’.

Some people experience a phantom limb as though it was normal in size and shape, much as it was before they lost the limb.  Yet others feel as though the limb was distorted in some way – larger or smaller, for example.  Drs Ramachandran and Blakeslee describe one patient who reported that her phantom arm was about "6 inches too short". 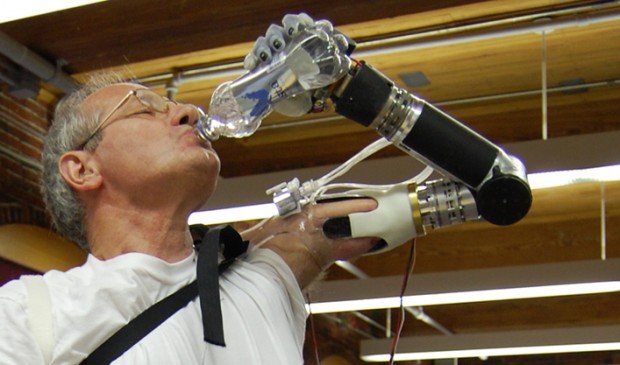 Phantom sensations may also occur after the removal of body parts other than the limbs, e.g. after amputation of the breast, or extraction of a tooth.

But perhaps the worst aspect of phantom limbs is that they very often cause excruciating pain, as though the pain of amputation or traumatic loss had been imprinted somewhere and was simply being replayed over and over again. About  60 to 80% of individuals with an amputation experience phantom sensations in their amputated limb, and the majority of the sensations are painful.

Occasionally, the pain can be made worse by stress, anxiety, even weather changes. Phantom limb pain is usually intermittent. The frequency and intensity of attacks usually decline with time.

Phantom pains can also occur in people who are paralyzed. It is often described as a burning or similarly strange sensation and can be extremely agonizing for some people, but the exact sensation differs widely for individuals. Other induced sensations include warmth, cold, itching, squeezing, tightness, and tingling.

Doctors have used drugs, surgery and any number of other extremely drastic ways to try to treat what is in the end an hallucination.

Perhaps the only treatment that shows any signs of success is that of the ‘mirror box’ developed by Dr Ramachandran and colleagues.  The person sees his undamaged limb as a reflection and by ‘seeing’ it as a whole, he is able to manipulate it and gradually reprogram himself or herself into believing the damaged or non existent  limb is actually OK and should therefore cause no pain.  It is trickery of the brain – reprogramming – but it works.  Repeated use of the box has led to permanent  improvement in some people, and in one exceptional case, even to the complete elimination of the phantom limb between the hand and the shoulder.

The success of the mirror method inspired a team of researchers at the University of Manchester in England to provide the same sort of effect but by using a computer and virtual reality.  The sufferer's real limb is attached to an interface that allows them to see two limbs moving in a computer-generated simulation. This works on the same principle as the mirror box technique, except that the computer created illusion is thought to be stronger.

If we look at the model, we can see that only one sensory input has gone, but just as blindness serves to open the door to the Composer to provide images, it would appear that damage to the nervous system opens the door for the composer to bring us new nervous sensations. And unfortunately it brings us the sensations we had at the time of amputation and it uses the perceptions log to do it.  So it is the perceptions log that is used to trigger the pain.  But where do the phantom sensations of the limb or organ itself come from?

There are three templates held in the spiritual world of every form. In the case of a human being 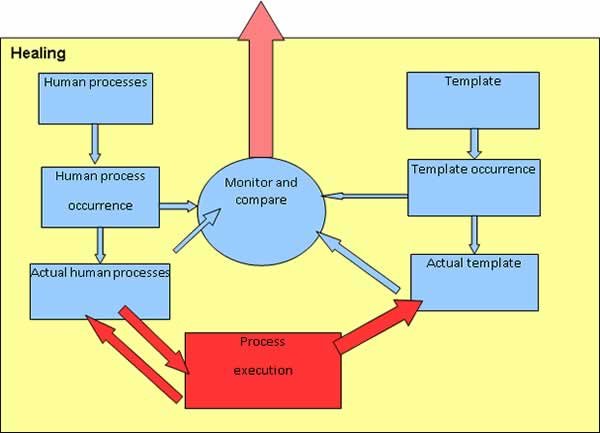 All this remember is ‘software’ - spiritual.

In cases of sudden or traumatic damage to the nervous system, or amputation and paralysis, I believe that the human being ‘system’ carries on as if the actual processes and actual template are as they were at the time of the sudden damage.  In effect, the system does not recognise that there has been a change because signalling ceases extremely quickly and there is no time for the healing or other repair processes to recognise what has happened.  The mind is actually working using the wrong templates.

Some proof of the fact that all this is just ‘software’ and that the templates can be manipulated is to be found with drug users.  Lewis Carroll took opium as well as, it would seem, quite a number of other things and his books are a record of all the ways he knew of to get a spiritual experience as well as the effects.

In Alice in Wonderland Carroll mentions quite a number of times the idea of limb distortions and body image changes.

Many people during spiritual experience that their body has changed shape, limbs elongated, other parts in some way contracted or elongated.  The template is thus being distorted.  Our body image undergoes software transformation and comes out of it different.

Hugh Herr: The new bionics that let us run, climb and dance