In a letter to a friend C S Lewis wrote:
"I have here discovered an author exactly after my own heart, whom I am sure you would delight in, W. B. Yeats. He writes plays and poems of rare spirit and beauty about our old Irish mythology."

In 1921, Lewis had the opportunity to meet Yeats on two occasions, since Yeats had moved to Oxford. Surprised to find his English peers indifferent to Yeats and the Celtic Revival movement, Lewis wrote:
"I am often surprised to find how utterly ignored Yeats is among the men I have met: perhaps his appeal is purely Irish — if so, then thank the gods that I am Irish." 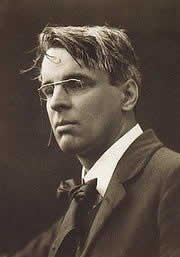 William Butler Yeats [1865–1939] was an Irish poet and dramatist and one of the foremost figures of 20th-century literature. Yeats was born and educated in Dublin, but spent his childhood in County Sligo.  A pillar of both the Irish and English literary establishments, in his later years Yeats served as an Irish Senator for two terms. He was a driving force behind the Irish Literary Revival, and along with Lady Gregory and Edward Martyn founded the Abbey Theatre, and served as its chief during its early years.

Yeats had a life-long interest in mysticism, spiritualism, occultism, and astrology. He read extensively on the subjects throughout his life and was especially influenced by the writings of Emanuel Swedenborg.  As early as 1892, he wrote:
"The mystical life is the center of all that I do and all that I think and all that I write."

His mystical interests—also inspired by a study of Hinduism, under the Theosophist Mohini Chatterjee, and the occult—formed much of the basis of his late poetry.

Yeats was also influenced by Irish mythology and legend.  "The Wanderings of Oisin" is based on the lyrics of the Fenian Cycle of Irish mythology.  Oisin introduces what was to become one of his most important themes: the appeal of the life of contemplation over the appeal of the life of action. His other early poems are meditations on the themes of love or mystical and esoteric subjects.

During 1885, Yeats was involved in the formation of the Dublin Hermetic Order. The same year, the Dublin Theosophical lodge was opened in conjunction with Brahmin Mohini Chatterjee. He later became heavily involved with the Theosophical Society and with hermeticism, particularly with the Rosicrucianism of the Golden Dawn.

Yeats attended his first séance in 1886. During séances held from 1912, a spirit calling itself "Leo Africanus" apparently claimed to be Yeats' Daemon, inspiring some of the speculations in Per Amica Silentia Lunae.He was admitted into the Golden Dawn in March 1890.

Yeats married late in life to George (Georgie) Hyde-Lees (1892–1968), whom he had met through occult circles.   During the first years of his marriage, he and George engaged in a form of automatic writing, which involved George contacting a variety of spirits and guides, which they termed "Instructors". The spirits communicated a complex and esoteric system of characters and history which they developed during experiments with the circumstances of trance and the exposition of phases, cones, and gyres. Yeats devoted much time to preparing this material for publication as A Vision (1925). In 1924, he wrote to his publisher T. Werner Laurie admitting: "I dare say I delude myself in thinking this book my book of books".

Yeats and the established churches

Yeats was born into the Protestant religion, but his attitude towards the established church was, up until his time in the senate, one more of disinterest than antagonism.  The disputes between the majority Catholics in Ireland and the minority Protestants, however, over the issue of divorce, began his ideological move away from pluralism towards religious confrontation.  In one debate in the Irish senate he said:
"Marriage is not to us a Sacrament, but, upon the other hand, the love of a man and woman and the inseparable physical desire, are sacred. This conviction has come to us through ancient philosophy and modern literature, and it seems to us a most sacrilegious thing to persuade two people who hate each other...to live together, and it is to us no remedy to permit them to part if neither can re-marry."

The resulting debate has been described as one of Yeats' "supreme public moments".

His language became more forceful; the Jesuit Father Peter Finlay was described by Yeats as a man of "monstrous discourtesy", and he lamented that:
"It is one of the glories of the Church in which I was born that we have put our Bishops in their place in discussions requiring legislation".

During his time in the senate, Yeats further warned his colleagues:
"If you show that this country, southern Ireland, is going to be governed by Roman Catholic ideas and by Catholic ideas alone, you will never get the North...You will put a wedge in the midst of this nation".

He memorably said of his fellow Irish Protestants, "we are no petty people".

Yeats’ poetry can be read as a simple but evocative description of ordinary things – sunsets, water etc,-  and as symbolic poetry in that every phrase or object described has symbolic meaning so that in addition to a particular meaning they suggest other meanings that seem more significant. In effect something ‘physical’ is used both to be itself and to suggest other spiritual qualities.

Yeats’ work can be divided into three general periods

Modernists read the well-known poem "The Second Coming" as a dirge for the decline of European civilization, but this poem is an expression of Yeats' apocalyptic mystical theories.

His most important collections of poetry started with The Green Helmet (1910) and Responsibilities (1914). In imagery, Yeats' poetry became sparer, more powerful as he grew older. The Tower (1928), The Winding Stairs (1929), and New Poems (1938) contained some of the most potent images in twentieth-century poetry; his Last Poems are conceded by most to be amongst his best.

In 1923, he was awarded a Nobel Prize in Literature for what the Nobel Committee described as "inspired poetry, which in a highly artistic form gives expression to the spirit of a whole nation;" and he was the first Irishman so honored. Yeats is generally considered one of the few writers whose greatest works were completed after being awarded the Nobel Prize; such works include The Tower (1928) and The Winding Stair and Other Poems (1929).

Please note that I have grouped the majority of the observations for The Vision under his wife Georgie on the site, as strictly speaking it was she who had the vision, Yeats simply gathered the results together into book form.

Despite all the previous description of Yeats. I believe that his spiritual life was driven by his relationships.

W B Yeats – Selected Poetry from Vacillation
All women dote upon an idle man
Although their children need a rich estate;
No man has ever lived that had enough
Of children's gratitude or woman's love 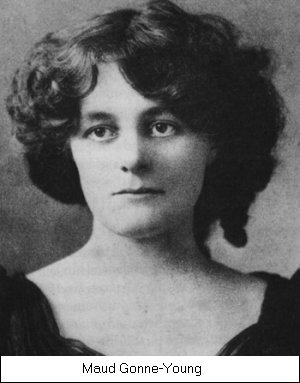 In 1889, Yeats at 24 years old met Maud Gonne.  She was a 23-year-old heiress and an ardent Nationalist. Yeats developed an obsessive infatuation with her beauty and outspoken manner, which lasted most of his life.  In later years he admitted, "it seems to me that she [Gonne] brought into my life those days—for as yet I saw only what lay upon the surface—the middle of the tint, a sound as of a Burmese gong, an over-powering tumult that had yet many pleasant secondary notes."

In 1891, he visited Gonne in Ireland and proposed marriage, but was rejected. He later admitted that from that point "the troubling of my life began". Yeats proposed to Gonne three more times: in 1899, 1900 and 1901. She refused each proposal, and in 1903, to his horror, married the Irish nationalist Major John MacBride.  The marriage was a disaster.

Maud began to visit Yeats in London. In 1904, she and MacBride agreed to end the marriage, but a  divorce was not granted by the court.  Yeats' friendship with Gonne persisted, and, in Paris, in 1908, they finally consummated their relationship.  But it was not a success "the tragedy of sexual intercourse is the perpetual virginity of the soul."

In essence Yeats had not only undergone unrequited love, then  grief, but also appeared to practise love with visualisation – he had raised her to a spiritual goddess like status, and sex actually degraded her status.

Gonne appears to have done the same thing: "I have prayed so hard to have all earthly desire taken from my love for you and dearest, loving you as I do, I have prayed and I am praying still that the bodily desire for me may be taken from you too."  By January 1909, Gonne was sending Yeats letters praising the advantage given to artists who abstain from sex.

By 1916, Yeats was 51 years old and still unmarried.  John MacBride had been executed by British forces in 1916, and Yeats’ final proposal to Maud Gonne took place in the summer of 1916.  By this time she was addicted to chloroform.  She refused. 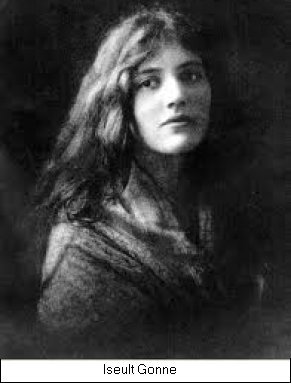 Yeats then proposed to Maud’s daughter Iseult Gonne, then 21, Maud's second child with Lucien Millevoye.  At fifteen, she had proposed to Yeats. But when Yeats proposed to her, she wisely rejected him [wise because being a substitute for your mother is not a good idea].

That September, Yeats proposed to the then 25-year-old Georgie. Despite warnings from her friends, she accepted, and the two were married in October. Their marriage was a success, in spite of the age difference, and in spite of Yeats' feelings of remorse and regret during their honeymoon. The couple went on to have two children, Anne and Michael.

But this is not the end, for Yeats then continued to have both ‘romantic relationships’ with other women and affairs.  But George wrote to her husband "When you are dead, people will talk about your love affairs, but I shall say nothing, for I will remember how proud you were”.

Other works [a selection]