Yeats, W B - The Wanderings of Oisin - I’d tell of that great queen Who stood amid a silence by the thorn

Notes:  In Irish mythology, Aengus was the god of love, youth and poetic inspiration. He was said to have four birds symbolizing kisses flying about his head (whence, it is believed, the xxxx's symbolising kisses at the end of lovers' letters come from).  Aengus fell in love with a girl he had seen in his dreams. His mother, Boann, searched Ireland for an entire year. Then his father, the Dagda, did the same. Finally, King Bodb Dearg of Munster found her after a year.  Aengus went to the lake of the Dragon's Mouth and found 150 girls chained up in pairs. He found his girl, Caer Ibormeith. On November 1, Caer and the other girls would turn into swans for one year, every second Samhain. Aengus was told he could marry Caer if he could identify her as a swan. Aengus succeeded. He turned himself into a swan and they flew away, singing beautiful music that put all its listeners asleep for three days and nights 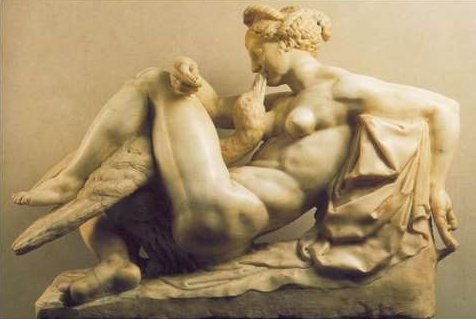 W B Yeats – Collected Poems
From The Wanderings of Oisin

I’d tell of that great queen
Who stood amid a silence by the thorn
Until two lovers came out of the air
With bodies made out of soft fire.  The one,
About whose face birds wagged their fiery wings
Said ‘Aengus and his sweetheart give their thanks
To Maeve and to Maeve’s household, owing all
In owing them the bride bed that gives peace’
Then Maeve ‘O, Aengus, Master of all lovers
A thousand years ago you held high talk
With the first kings of many pillared Cruachan
O when will you grow weary?’
They had vanished;
But out of the dark air over her head there came
A murmur of soft words and meeting lips