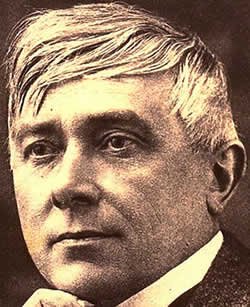 Maurice Maeterlinck (1862 –1949) was a Belgian playwright, poet, and essayist. He was awarded the Nobel Prize in Literature in 1911. His plays form an important part of the Symbolist movement.

Initially I classified Maeterlinck as a writer, but Arthur Symons was convinced Maeterlinck was a mystic, and given Maeterlinck's understanding of the symbolism and concepts of the spiritual, I have come to the conclusion that Symons is right.

Maeterlinck was a mystic.

The secret of things which is just beyond the most subtle words, the secret of the expressive silences, has always been clearer to Maeterlinck than to most people; and, in his plays, he has elaborated an art of sensitive and at the same time highly ornamental simplicity, which has come nearer than any other art to being the voice of silence. 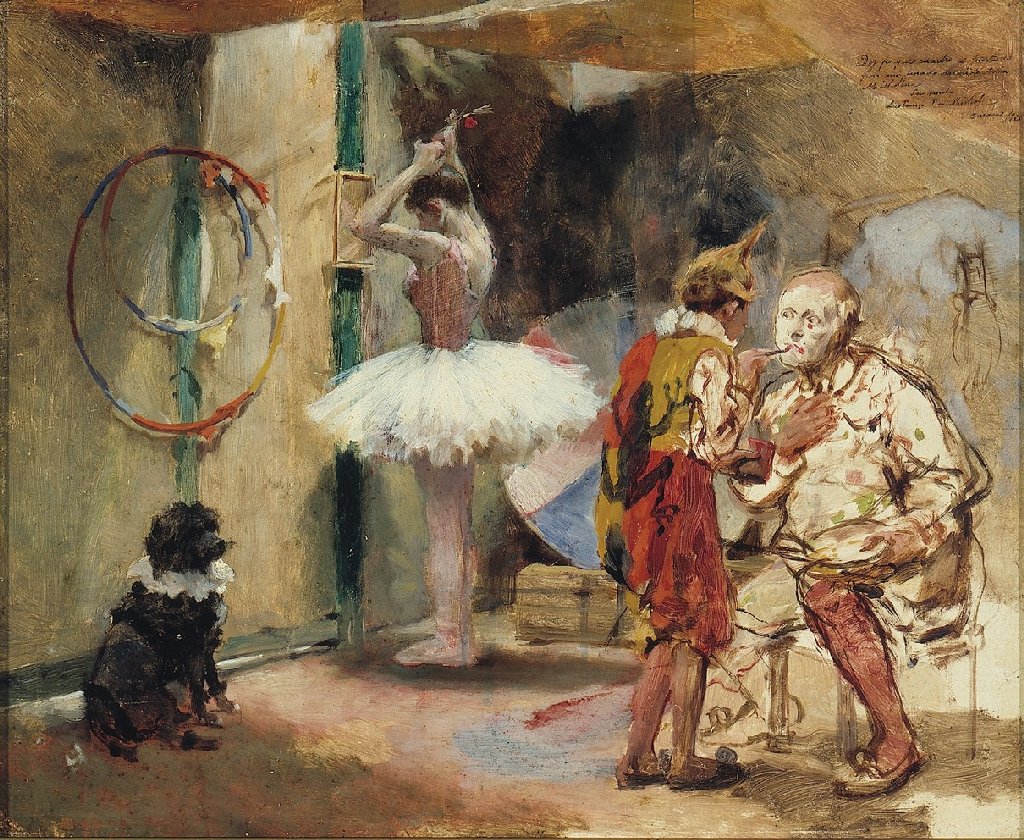 To Maeterlinck the theatre has been, for the most part, no more than one of the disguises by which he can express himself, and with his book of meditations on the inner life, Le Trisor des Humbles, he may seem to have dropped his disguise.
All art hates the vague; not the mysterious, but the vague; two opposites very commonly confused, as the secret with the obscure, the infinite with the indefinite. And the artist who is also a mystic hates the vague with a more profound hatred than any other artist.
Thus Maeterlinck, endeavouring to clothe mystical conceptions in concrete form, has invented a drama so precise, so curt, so arbitrary in its limits, that it can safely be confided to the masks and feigned voices of marionettes. His theatre of artificial beings, who are at once more ghostly and more mechanical than the living actors whom we are accustomed to see, in so curious a parody of life, moving with a certain freedom of action across the stage, may be taken as itself a symbol of the aspect under which what we fantastically term 'real life' presents itself to the mystic.

Maeterlinck was born in Ghent, Belgium, to a wealthy, French-speaking family. In September 1874 he was sent to the Jesuit College of Sainte-Barbe.  This was to have a defining influence on him.  The school was strict and dogmatic, works of the French Romantics were scorned and only plays on religious subjects were permitted. His experiences at this school influenced his dislike and rejection of both the Catholic Church and organised religion. 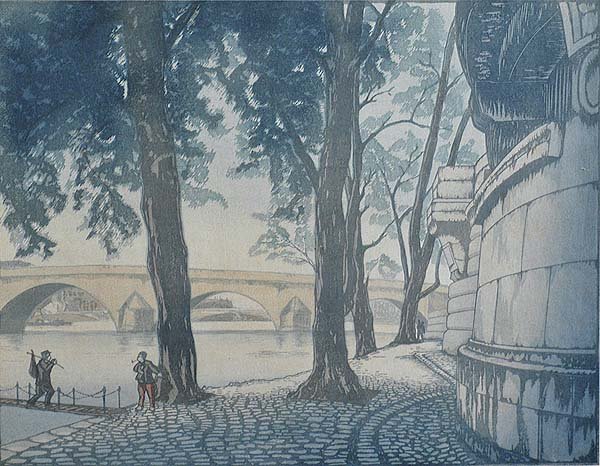 Although his preference was for poetry and writing, his father wanted him to go into law, so law he studied at the University of Ghent. But after finishing his studies in 1885, he spent a few months in Paris, where he met members of the Symbolism movement, Villiers de l'Isle Adam in particular, who would have a great influence on Maeterlinck's subsequent work.  Maeterlinck was also an avid reader of Arthur Schopenhauer.  From this point he became a writer. 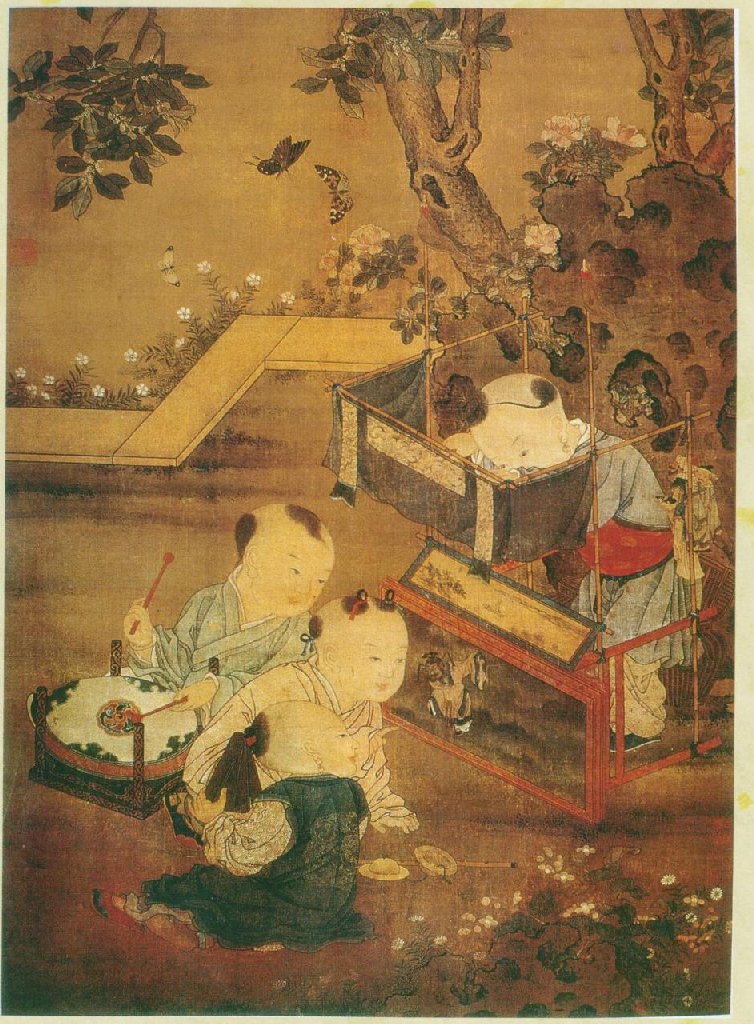 Materlinck was a deeply spiritual man with a very profound understanding of spiritual concepts and many of these are incorporated into his plays.  Mysticism and metaphysics influenced his work throughout his career.   One recurring theme is that of the puppet.

Materlinck was fascinated by the concept of fate , destiny and just how much man was in control, or powerless against the forces of fate.  He used marionettes in a number of his plays to show the symbolic association between the Great Work, destiny and the way we are  'guided by strings operated by the great puppeteer'.  Maeterlinck considered marionettes an excellent representation of the spiritual world's control over man. He wrote Interior, The Death of Tintagiles, and Alladine and Palomides for marionette theatre.

Just like Shakespeare, he came to view the theatre as an analogy for life, we were but players on the stage of life.  We had roles, we had lines, we acted them, but we often had no idea of the ending or the plot!  He gradually developed his notion of the "static drama", which aimed to show not the normal drama of human passions and petty concerns, but instead the much wider drama of which we were a part and perhaps not aware. 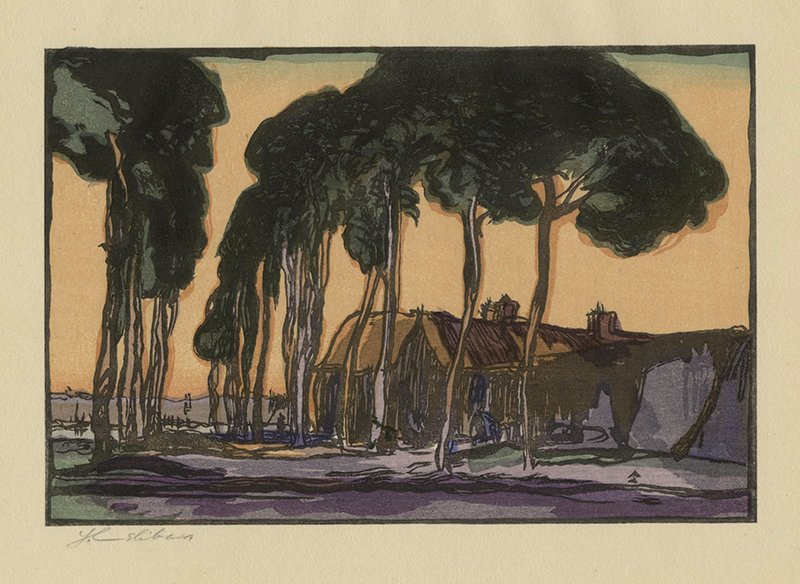 The Outskirts of a Flemish Town Frank Brangwyn and Yoshijiro Urushibara

He explained his ideas on the static drama in his essay "The Tragic in Daily Life" (1896), which appeared in The Treasure of the Humble. The actors were to speak and move as if pushed and pulled by an external force, manipulated by the great puppeteer.  Maeterlinck would often continue to refer to his cast of characters as "marionettes."

Maeterlinck's  reputation depends on his early plays (published between 1889 and 1894), which created a new style of dialogue, extremely lean and spare, where what is suggested is more important than what is said. The characters have no foresight, and only a limited understanding of themselves or the world around them.  The scenery was almost as important as the dialogue in creating this impression and all the symbols of the time were used [see observations].

Maeterlinck instantly became a public figure when his first play, Princess Maleine, received enthusiastic praise from Octave Mirbeau, the literary critic of Le Figaro in August 1890. In the following years, he wrote a series of symbolist plays characterized by fatalism and mysticism, most importantly Intruder (1890), The Blind (1890) and Pelléas and Mélisande (1892). 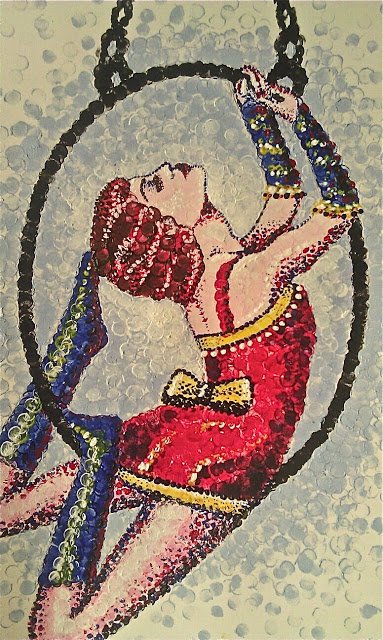 The principle influence and inspiration for his work was love and making love, but he also practised 'meditation' – relaxation techniques similar to those used by Salvador Dali and Rene Magritte.

His relationship with the singer and actress Georgette Leblanc from 1895 till 1918,  influenced his work for two decades. With the play Aglavaine and Sélysette, Maeterlinck began to create characters, especially female characters, based on her; Leblanc performed these female characters on stage.

In 1895, with his parents frowning upon his open relationship with an actress, Maeterlinck and Leblanc moved to the district of Passy in Paris. The Catholic Church refused  to grant her a divorce from her Spanish husband.  During this period, Maeterlinck published his Twelve Songs (1896), The Treasure of the Humble (1896), The Life of the Bee (1901), and Ariadne and Bluebeard (1902).

In 1903, Maeterlinck received the Triennial Prize for Dramatic Literature from the Belgian government. “During this period, and down to the Great War, he was widely looked up to, throughout Europe, as a great sage, and the embodiment of the higher thought of the time”. 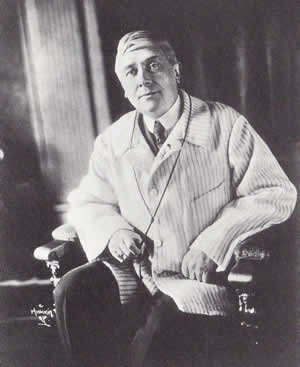 In 1906, Maeterlinck and Leblanc moved to a villa in Grasse. He spent his hours meditating and walking. As he emotionally pulled away from Leblanc, he entered a state of depression. Diagnosed with neurasthenia, he rented the Benedictine Abbey of St. Wandrille in Normandy to help him relax. In one of the more ironic twists of his life, by renting the abbey he rescued it from being sold and used as a chemical factory and as a consequence received a blessing from the Pope.   Leblanc would often walk around in the dress of an abbess; he would wear roller skates as he moved about the house.

During this time, he wrote his essay "The Intelligence of Flowers" (1906). He donated money to many workers' unions and socialist groups. At this time he conceived his greatest contemporary success: the fairy play The Blue Bird (1908, but largely written in 1906). 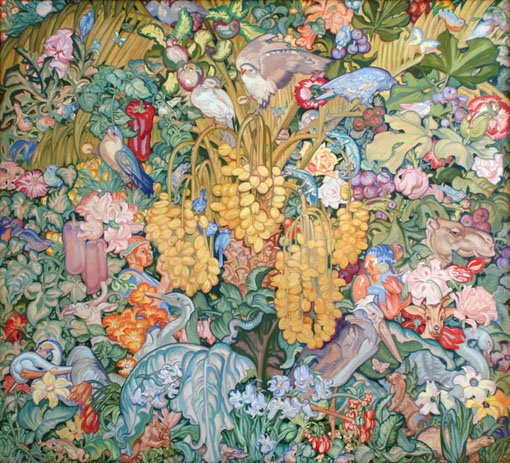 After the writing "The Intelligence of Flowers", he suffered from a period of depression and writer's block.  Although he recovered from this after a year or two, he was never so inventive as a writer again. His later plays, such as Marie-Victoire (1907) and Mary Magdalene (1910), provided with lead roles for Leblanc, were notably inferior to their predecessors, and sometimes merely repeat an earlier formula.  Even though alfresco performances of some of his plays at St. Wandrille had been successful, Maeterlinck felt that he was losing his privacy. The death of his mother on 11 June 1910, added to his depression.

In 1910 he met the 18-year-old actress Renée Dahon during a rehearsal of The Blue Bird. She became his companion. Winning the Nobel Prize for Literature also served to lighten his spirits. By 1913, he was more openly socialist and sided with the Belgian trade unions against the Catholic party during a strike.

He began to lambast the Catholic Church in his essays for misconstruing the history of the universe.   By a decree of 26 January 1914, his opera omnia were placed on the Index Librorum Prohibitorum by the Roman Catholic Church. 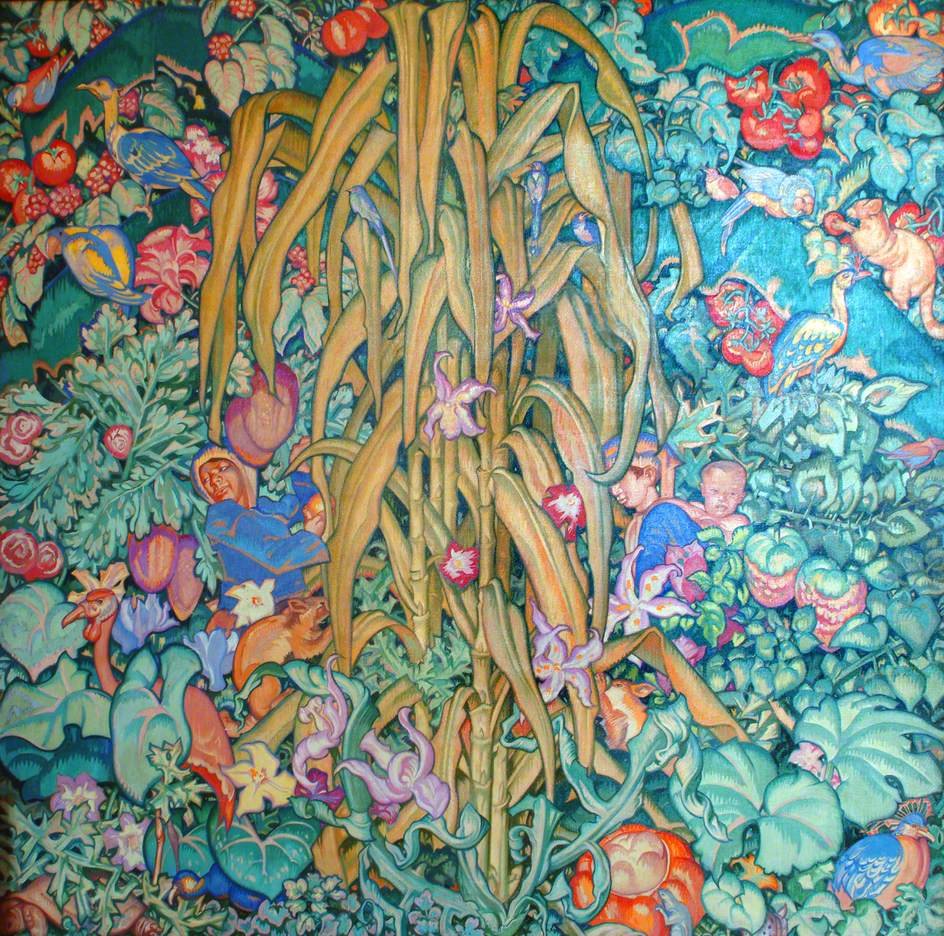 When Germany invaded Belgium in 1914, Maeterlink and Leblanc decided to leave Grasse for a villa near Nice, where he spent the next decade of his life. He gave speeches on the bravery of the Belgian people and placed guilt upon all Germans for the war. Although his patriotism, and his indifference to the harm he was doing to his standing in Germany, do him credit, it severely damaged his reputation as “a great sage who stood above current affairs”. While in Nice he wrote The Mayor of Stilmonde, which was quickly labeled by the American press as a "Great War Play." He also wrote The Betrothal, a sequel to The Blue Bird, in which the heroine of the play is clearly not a Leblanc archetype.  On 15 February 1919 Maeterlinck married Dahon.

After 1920 Maeterlinck ceased to contribute significantly to the theatre, but continued to produce essays on his favourite themes of occultism, ethics and natural history. The international demand for these fell off sharply after the early 1920s, but his sales in France remained substantial until the late 1930s. Dahon gave birth to a stillborn child in 1925. 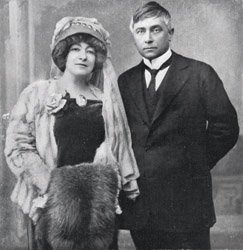 In 1940, he fled to Lisbon in order to escape the Nazi invasion of both Belgium and France and subsequently arrived in the United States from Lisbon on the Greek Liner Nea Hellas. The New York Times quoted him as saying, "I knew that if I was captured by the Germans I would be shot at once, since I have always been counted as an enemy of Germany because of my play, The Mayor of Stilmonde, which dealt with the conditions in Belgium during the German Occupation of 1918."

He returned to Nice after the war on 10 August 1947.  He died in Nice on 6 May 1949 after suffering a heart attack. There was no priest at his funeral. 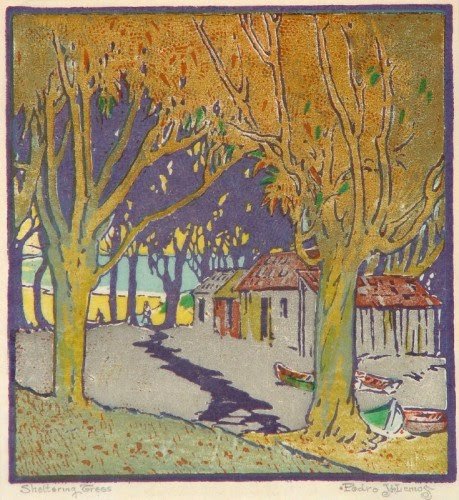 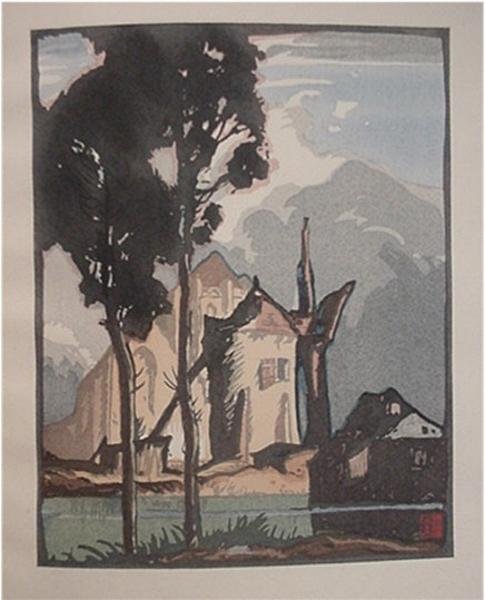