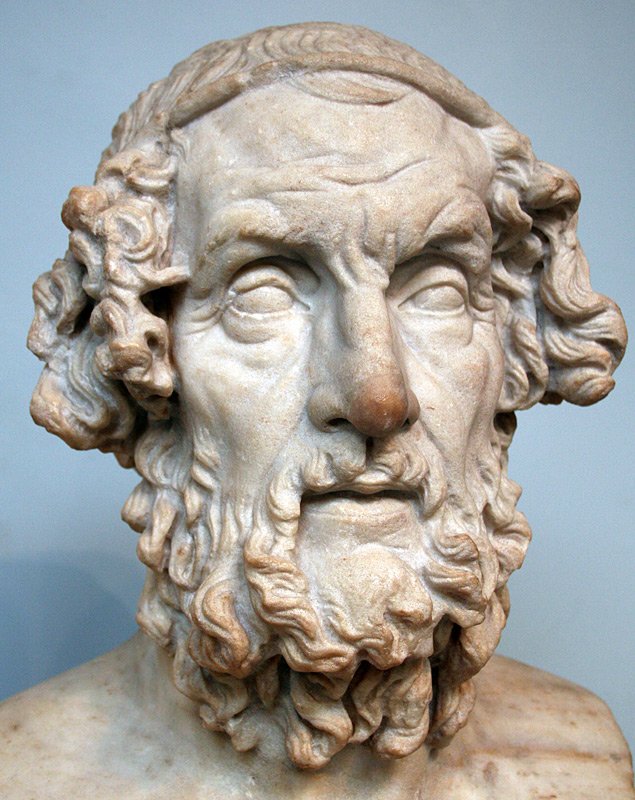 Photograph taken of the bust of Homer in the British Museum

Homer (Ancient Greek: Ὅμηρος [hómɛːros], Hómēros) is best known as the author of the Iliad and the Odyssey.

The epic the Thebais, is also attributed to him and was written about the time of the appearance of the Greek alphabet, in the early 8th century BCE.

All his works could have been originally oral and there is some speculation that all of Homer’s works were much older myths that he simply wrote down.

The Greeks of the sixth and early fifth centuries BCE understood by the works of "Homer", generally, "the whole body of heroic tradition as embodied in hexameter verse".  The entire Epic Cycle was included. The genre included further poems on the Trojan War, such as the Little Iliad, the Nostoi, the Cypria, and the Epigoni, as well as the Theban poems about Oedipus and his sons. Other works, such as the corpus of Homeric Hymns, the comic mini-epic Batrachomyomachia ("The Frog-Mouse War"), and the Margites were also attributed to him.

Although classified as a writer and poet, what is little known is that Homer was an Adept - a successful initiate from the Mysteries.  He is thus classified as a mystic, not a philosopher or writer.

The name Hom-eros is quite tantalising, as the Hom is from Greek homou, "together," and eros is – well eros.  The man joined with divine love, as such he was a ‘god’.  Rather interestingly, the author of the Hymn to Apollo [attributed to Homer] also identifies himself in the last verse of the poem as a ‘blind man from Chios’.  Or maybe it was kaos, given he was a god.

The example of John Milton, who composed and dictated "Paradise Lost" while totally blind, demonstrates that a blind man can compose an epic. 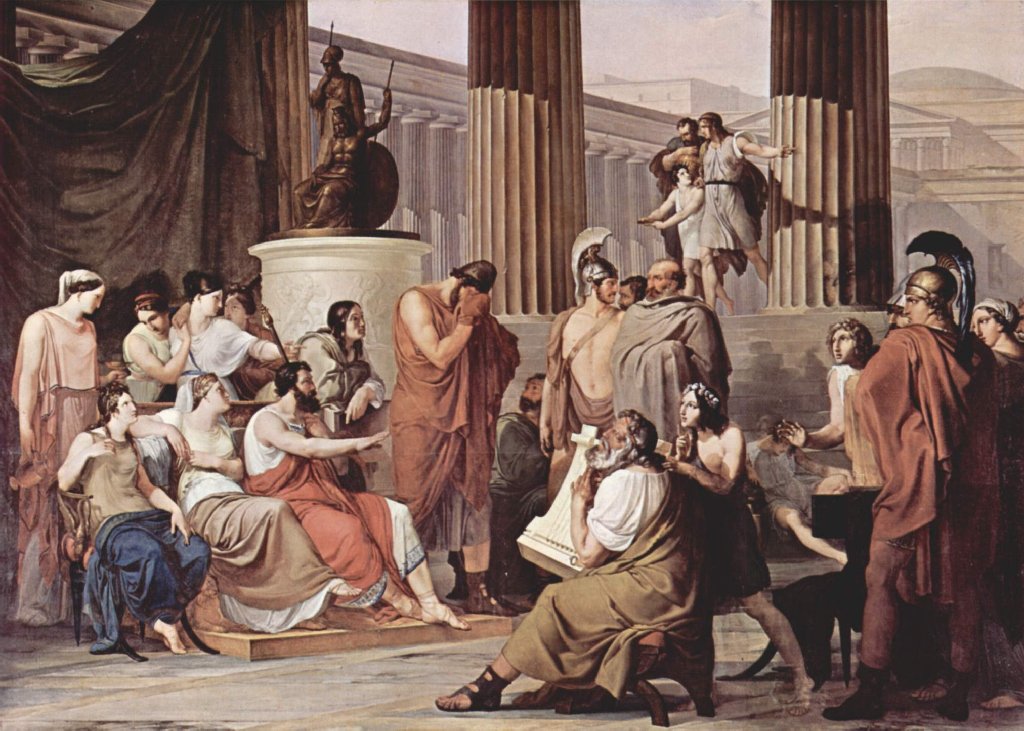 Francesco Hayez - Odysseus at the palace of Alcinous

And as we can see from this site, being blind sometimes has its advantages, as from a spiritual point of view one ‘sees’ much more – in fact one becomes a 'seer'.

But blindness in this context may be symbolic – led by his higher spirit.

Herodotus estimates that Homer lived 400 years before his own time, which would place him at around 850 BCE. Pseudo-Herodotus estimates that he was born 622 years before Xerxes I placed a pontoon bridge over the Hellespont in 480 BCE, which would place him at 1102 BCE, 168 years after the fall of Troy in 1270 BCE. These two end points are 252 years apart, representative of the differences in dates given by the other sources.

much of the geographic and material content of the Iliad and Odyssey appear to be consistent with the Aegean Late Bronze Age, the time of the floruit of Troy, but not the time of the Greek alphabet.

The importance of Homer to the ancient Greeks is described in Plato's "Republic", which portrays him as the protos didaskalos, "first teacher," and the hegemon paideias, the "leader of Greek culture," who ten Hellada pepaideukon, was "the teacher of [all] Greece."  Fragments of Homer account for nearly half of all identifiable Greek literary papyrus finds in Egypt.

Why was Homer so important? 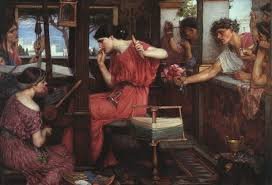 Even Penelope at her 'loom' is a symbolic figure ....

There is a reason.

In the days before printing, the way to encapsulate ancient ‘truths’ was in a story – a myth.  It had to be gripping enough to be capable of being remembered; obtuse enough so that if, in future, a religion arose that persecuted those who knew these facts, the myths could continue, even if the seers were murdered; and complex enough that it could include all the needed information.  And the information consisted of two things – what had been discovered about the spiritual world – its layout and concepts – and all the important symbols used in communication with spirit helpers.

It thus becomes essential – absolutely essential – that not a word is changed to make it read better or become more ‘exciting’, as every word, every concept, every symbol has been carefully chosen.  The text, just like the other texts on the site –  Beowulf, the Bible, the Chemical Wedding of Christian Rosenkreutz,  the Egyptian Book of the Dead, the Epic of Gilgamesh, the Hypnerotomachia Poliphili, Nursery rhymes, the Poetic Edda, the Romance of the Rose, the Rosary of the philosophers and so on is a carefully worded symbolic and allegorical text.  This is why Matthew Arnold says: 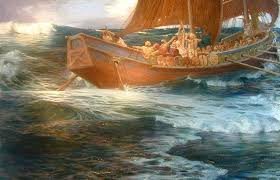 Or to put this another way, don’t go mucking about with the text as you are dealing with someone who knew what he was doing and chose his words very very carefully.

The following quote starts in a slightly gloomy tone, to end on an encouraging note:

Considered word-for-word, the printed texts as we know them are the product of the scholars of the last three centuries. Each edition of the Iliad or Odyssey is a little different, as the editors rely on different manuscripts and fragments, and make different choices as to the most accurate text to use. The term “accuracy” reveals a fundamental belief in an original uniform text. The manuscripts of the whole work currently available date to no earlier than the 10th century. These are at the end of a missing thousand-year chain of copies made as each generation of manuscripts disintegrated or were lost or destroyed. These numerous manuscripts are so similar that a single original can be postulated.

There is the possibility that Homer was an Adept of the Egyptian Mysteries, which means he is of especial importance.  According to Diodorus Siculus, Homer visited Egypt, so he was not Egyptian, but he went there for a purpose. 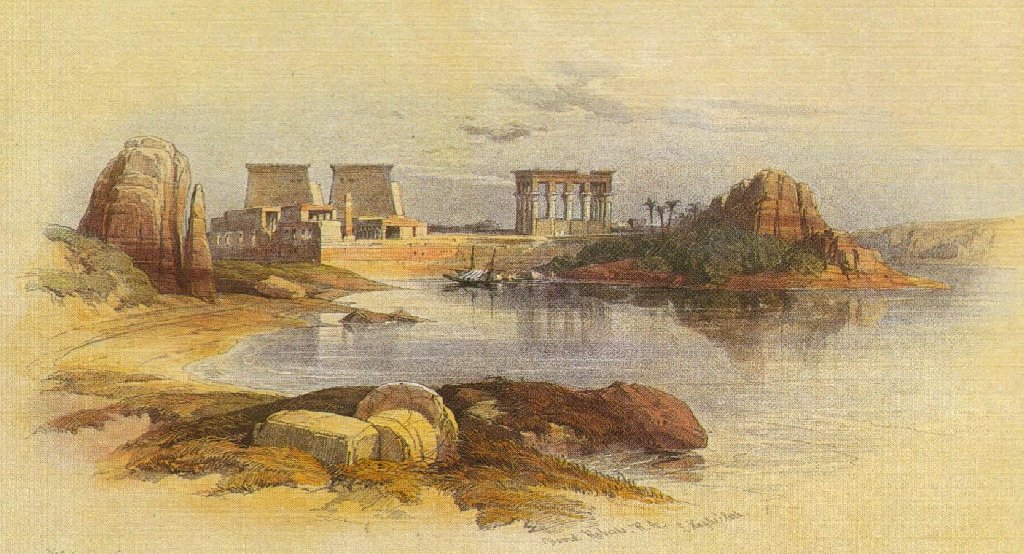 The original ‘manuscripts’ of his works were found by Aristarchus of Samothrace in the 2nd century BCE. He was Librarian of the Library of Alexandria, in Egypt.  The one he selected to be preserved was called the ‘koine’.  The koine in turn had come from the first librarian at Alexandria, Zenodotus, who flourished at the beginning of the 3rd century BCE.  Neither Zenodotus nor Aristarchus mentioned any authentic master copy. Their method of selection was ‘intuitive’. The current division into 24 books each for the Iliad and Odyssey came from Zenodotus.  The earliest mention of a work of Homer was by Callinus, a poet who flourished about 750 BCE.  At times, I wondered whether Homer and Hermes Trismegistus were one and the same source, but this is pure speculation on my part.

Present day scholars devote an inordinately large part of their lives trying to match the places in Homer’s epics with real geographically existing places, but this is to miss the point completely.  Homer is describing the spiritual path of the hero.  The fact that some places may well have existed is rather extraneous to the purpose of the story. 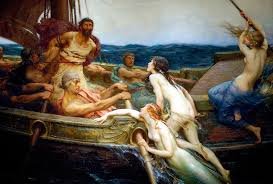 The overall message is that the journey and what you learn from it, as a hero, is in a sense more important than the final destination.  The journey is the person acting out their destiny.  Along the way there will be adversity and pain and you will gain helpers and lose helpers.  The boat is symbolic as it always is in these epics.  Those who set out on a symbolic raft are in deep trouble, so Homer’s hero has a boat with both oars and sails.

These days we have Harry Potter, the Hobbits [in Lord of the Rings] and the Jedi in Star Wars as a continuation of the theme, with similar patterns of story-line.  In the Hellenistic period, Homer was the subject of a hero cult in several cities. A shrine, the Homereion, was devoted to him in Alexandria by Ptolemy IV Philopator in the late 3rd century BCE.

People like heroes, especially boys, and want to model themselves on them, which is why Homer was so important.  A marble relief, [found in Italy but thought to have been sculpted in Egypt] depicting the apotheosis of Homer, demonstrates vividly that the Greeks considered Homer not merely a great poet but the divinely inspired reservoir of all literature. 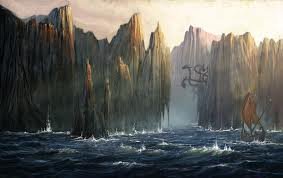 Scilla and charybides were they whirlpools or twin pillars?

I have provided a very small selection from his two major works simply to demonstrate how they might have been constructed.

The symbols, concepts or lessons to be learnt  are used to weave a narrative.

Later initiates may have even be asked, as a sort of test, to pick out all the concepts and symbols to see how well they were progressing.