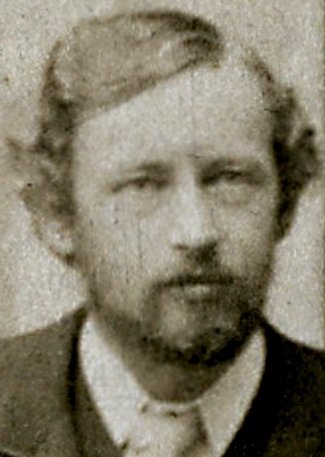 Charles Howard Hinton (1853, United Kingdom – 30 April 1907, Washington D.C., United States) was a British mathematician, inventor and a visionary of some note.  Like many visionaries he was eccentric, little understood at the time he developed his ideas, and has been largely forgotten.

But his star may be on the ascendant, as science is at last beginning to catch up with where he was, well over 100 years ago.  There is already recognition of his genius in the creative artistic community.  Hinton is the main character of Carlos Atanes's play Un genio olvidado (Un rato en la vida de Charles Howard Hinton) -  A forgotten genius.  The play was premiered in Madrid on May 2015 and published in May 2017.

Hinton received no awards, no prizes and no acknowledgement of his genius during his lifetime, although many people used his ideas later – J B Priestley acknowledged his contribution in Man and Time, Ouspensky used his ideas and J W Dunne also used his work in An Experiment with Time.

The Reverend Charles Lutwidge Dodgson (1832 to 1898) better known by the pen name Lewis Carroll, who wrote Alice's Adventures in Wonderland in around 1865, was not unfamiliar with the concepts Hinton explained, and the Cheshire cat – with the symbolism of the mouth with its teeth – ties in very neatly with Hinton’s ideas. Obviously, Carroll’s ideas preceded Hinton’s, but it indicates that a number of mathematicians were studying this area trying to come up with solutions.  Some attempted to get the ideas over using stories and some, like Hinton using interesting models. 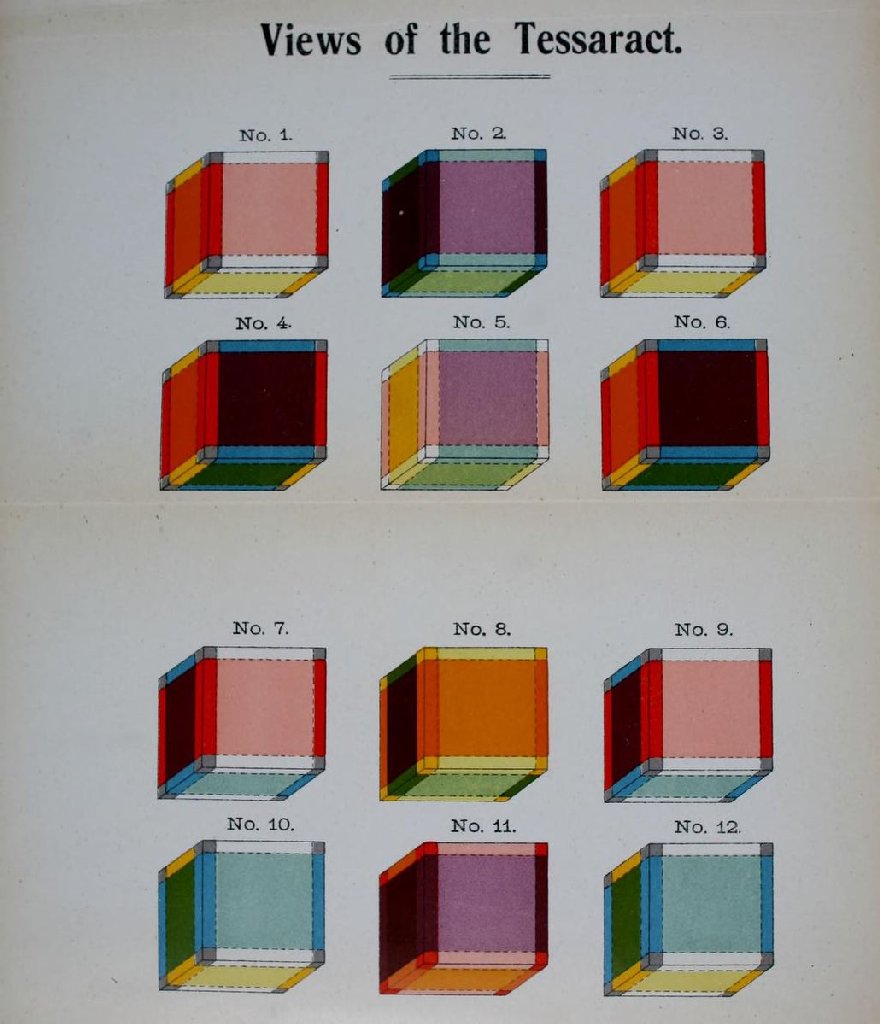 Hinton foresaw the curved universe of Einstein, developed a theory of time which was compatible with both Whitehead’s and Wheeler's and some of the current developments in quantum theory.  He described his theories of time in terms of higher dimensions, particularly the fourth dimension, but these were mathematical constructs – in a sense he predicted that if the universe was a ‘software one’ and not a ‘hardware’ one, one could have as many dimensions as one wanted and thus ‘time’ would simply be another mathematical dimension.  He is known for coining the word "tesseract" and for his work on methods of visualising the geometry of higher dimensions, or at least trying to – as clearly a software construct of an n-dimensional world greater than 3 cannot actually be visualised even though it can be constructed mathematically.

What Is the Fourth Dimension? By Charles H. Hinton
at this point we have to give up the aid that is to be got from any presentable object, and we have simply to investigate what the properties of the simplest figure in four dimensions are.

And he used both observation and logic to deduce that a 'fourth dimension', indeed possibly many dimensions, do exist. 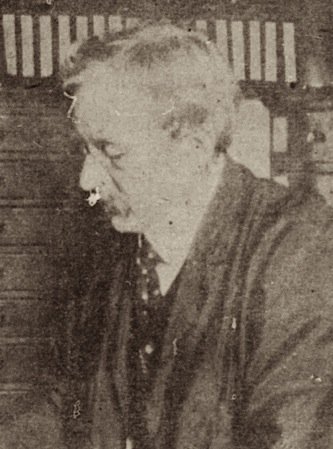 What I have come to see is that in the mere facts of the material world there is an evident and clear proof of a higher existence than that which we are conscious of in our ordinary bodily life.  And it is, I believe, in the prosecution of this line of thought that the access to science of those truths which are apprehended of the religious consciousness will be found. However much or little these may seem in the reflections of others, they have been of vital importance to me and the effect has been thus far simply ruinous,  for I found myself in a false position and the first & absolute condition of any true life as I understand it now lies in absolute openness.

I have had to give up everything and go through disgrace such as rarely falls to anyone’s lot and have to put up with misconception on every side.  But still, although I have lost all outward things I have got on the right basis of life. In the book which you have got of mine lie the steps of my reasoning.

And I cannot help believing that at the present time when there are so many who like myself base all their belief on the evidence of the senses and refuse to admit anything supernatural, the process of thought which has led me to see that .. there is a truer and higher idealism than can be got by turning from matter, may be of interest and perhaps of use. 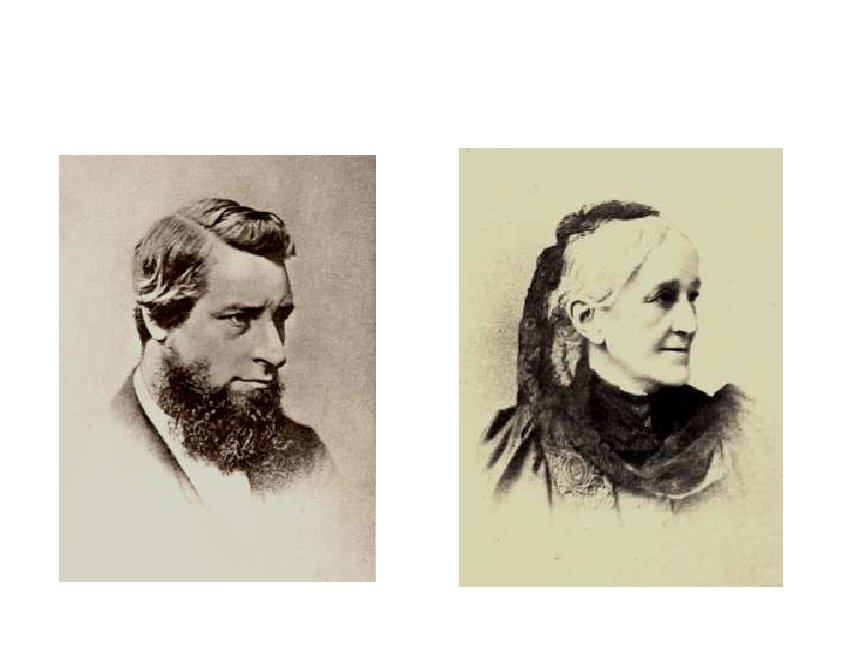 Charles Howard Hinton was born in 1853 to James and Margaret Hinton.  Charles went to Rugby school and then taught at Cheltenham College while he studied at Balliol College, Oxford (1873 to 1876), where he obtained his B.A. in 1877.

From 1880 to 1886, he taught at Uppingham School in Rutland, where Howard Candler, a friend of Edwin Abbott's, also taught.

Edwin Abbott’s ideas on Flatland were to have an impact on Hinton’s theories.  Hinton received his M.A. from Oxford in 1886. 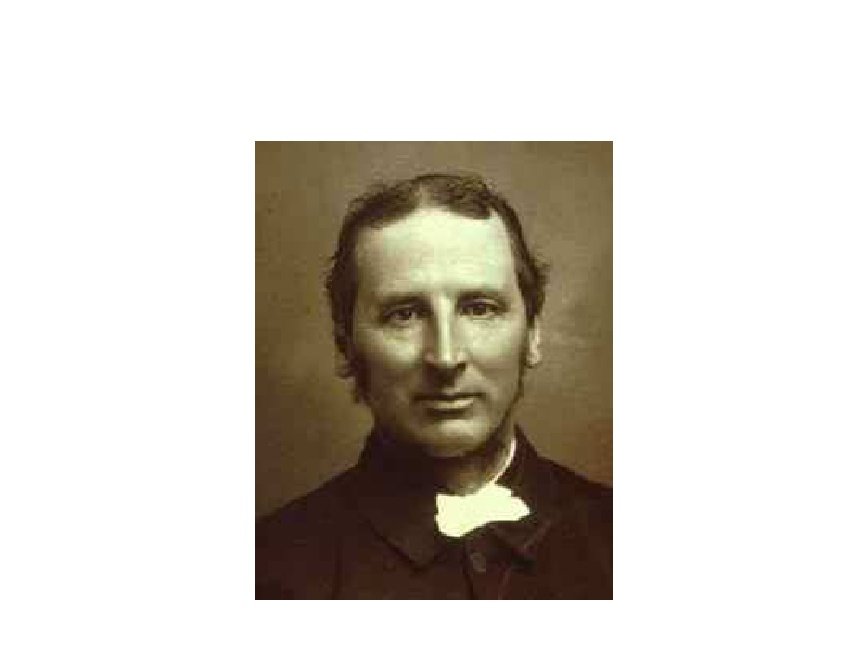 The mathematical, satirical, and religious allegory Flatland by the then little-known but immensely prolific Victorian English schoolmaster and theologian Edwin Abbott, was first published anonymously in England in 1884.

Hinton's Scientific romances, including "What is the Fourth Dimension?" and "A Plane World", were published as a series of nine pamphlets by Swan Sonnenschein & Co. during 1884–1886. In the introduction to "A Plane World", Hinton referred to Abbott's recent Flatland as having similar design but different intent. Abbott used the stories as "a setting wherein to place his satire and his lessons. But we wish in the first place to know the physical facts." Hinton's world existed along the perimeter of a circle – the cosmic egg - rather than on an infinite flat plane. He extended the connection to Abbott's work sometime later with An Episode on Flatland: Or How a Plain Folk Discovered the Third Dimension (1907). 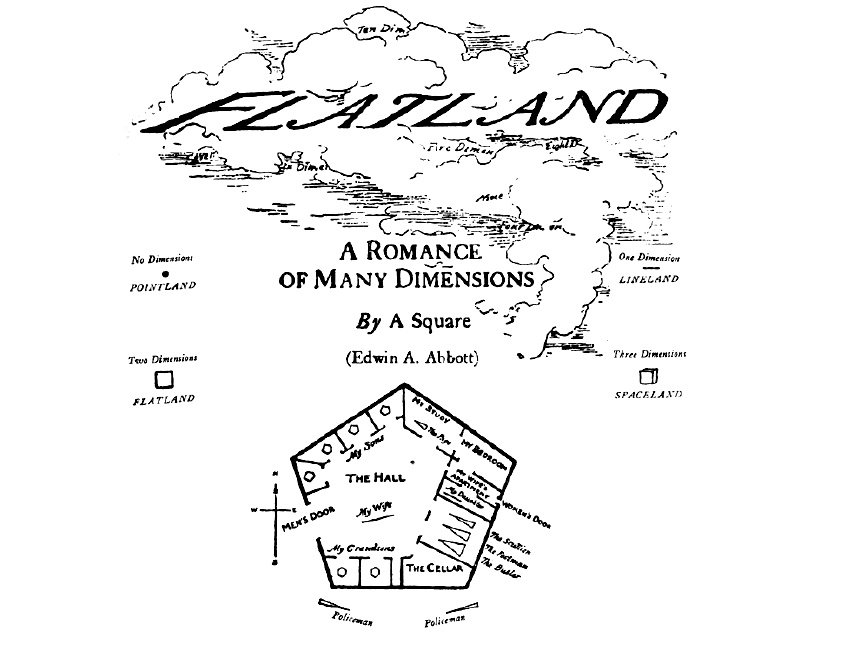 Thus most of his thinking and most of his truly revolutionary ideas came to him whilst he was still at Oxford.  But his father’s ideas not only had a positive influence on his life, they were also to have a very negative effect as well, curtailing a very promising career.

Charles’s father James Hinton (baptized 26 November 1822 – died 16 December 1875) was an English surgeon and author.  According to the book From Hell, Hinton was an idealistic doctor “given to passionate outbursts and flights of metaphysical theorizing and speculation.  Encyclopaedia Britannica says that Charles’ father’s books and papers “had a wide circulation on both sides of the Atlantic” and that this was  “On account of their fresh and vigorous discussion of many of the important moral and social problems of the time”.

And one of the subjects James father tackled was polygamy. James Hinton was a radical advocate of polygamous relationships, and according to Charles' mother, Margaret, James had once remarked to her: "Christ was the saviour of Men but I am the saviour of Women."  The notoriety of his writings on polygamy “led to accusations in polite society of actual immorality leading to a renunciation of them just before he died”. 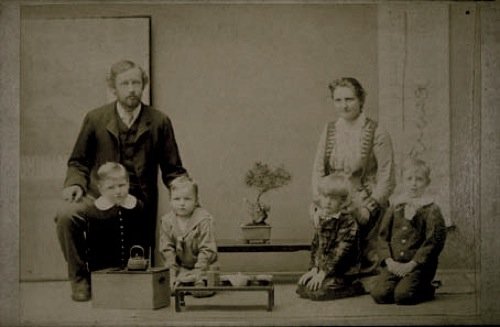 In 1883, he went through a marriage ceremony with Maud Florence, by whom he had had twin children, under the assumed identity of John Weldon. He was subsequently convicted of bigamy in 1886, and spent three days in prison, losing his job at Uppingham. 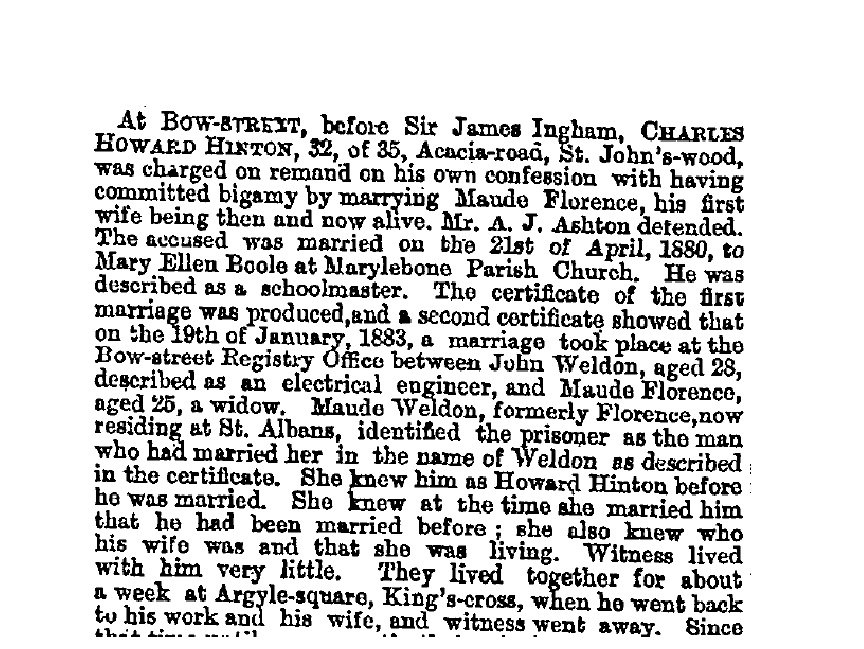 Although Charles published books after this conviction, most are rehashes of his first ideas.  In 1887 Charles moved with Mary Ellen to Japan to work in a mission before accepting a job as headmaster of the Victoria Public School. In 1893 he sailed to the United States on the SS Tacoma to take up a post at Princeton University as an instructor in mathematics. 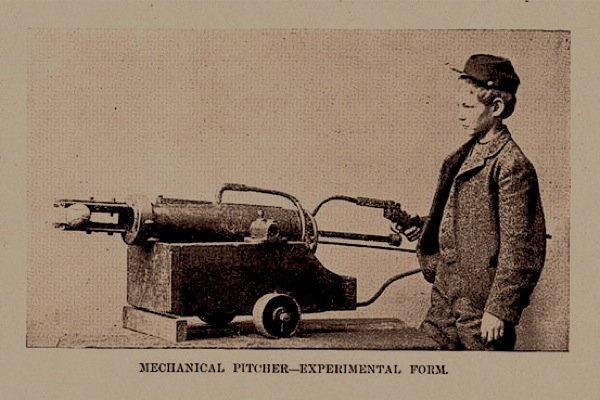 He still managed some inventive work, but in an area entirely different to his fourth dimension work.

In 1897, he designed a gunpowder-powered baseball pitching machine for the Princeton baseball team's batting practice. The machine was versatile, capable of variable speeds with an adjustable breech size, and firing curve balls by the use of two rubber-coated steel fingers at the muzzle of the pitcher. Hinton successfully introduced the machine to the University of Minnesota, where he worked as an assistant professor until 1900, when he resigned to move to the U.S. Naval Observatory in Washington, D.C.

At the end of his life, Hinton worked as an examiner of chemical patents for the United States Patent Office. At age 54, he died unexpectedly of a cerebral haemorrhage on 30 April 1907. After Hinton's sudden death his wife, Mary Ellen, committed suicide in Washington, D.C. in May 1908.

[if] I may state the general bearings of this work, for every branch of work has its general bearings. It is an attempt, in the most elementary and simple domain, to pass from the lower to the higher. In pursuing it the mind passes from one kind of intuition to a higher one, and with that transition the horizon of thought is altered. It becomes clear that there is a physical existence transcending the ordinary physical existence; and one becomes inclined to think that the right direction to look is, not away from matter to spiritual existences but towards the discovery of conceptions of higher matter, and thereby of those material existences whose definite relations to us are apprehended as spiritual intuitions. Thus, "material" would simply mean "grasped by the intellect, become known and familiar." Our apprehension of anything which is not expressed in terms of matter, is vague and indefinite. To realize and live with that which we vaguely discern, we need to apply the intuition of higher matter to the world around us. And this seems to me the great inducement to this study. Let us form our intuition of higher space, and then look out upon the world.

Secondly, in this progress from ordinary to higher matter, as a general type of progress from lower to higher, we make the following observations. Firstly, we become aware that there are certain limitations affecting our regard. Secondly, we discover by our reason what those limitations are, and then force ourselves to go through the experience which would be ours if the limitations did not affect us. Thirdly, we become aware of a capacity within us for transcending those limitations, and for living in the higher mode as we had lived in the previous one. 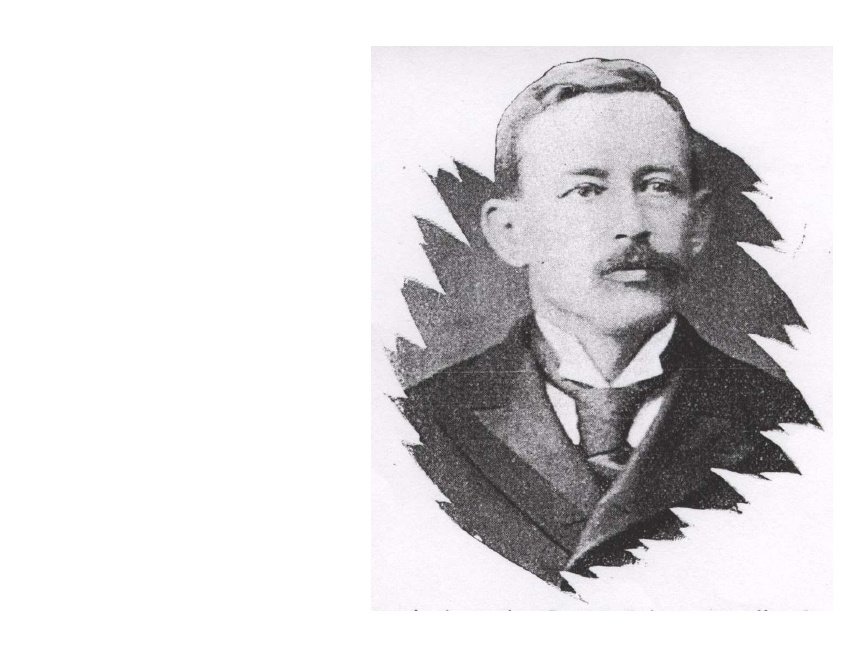 Hinton in the Gopher magazine