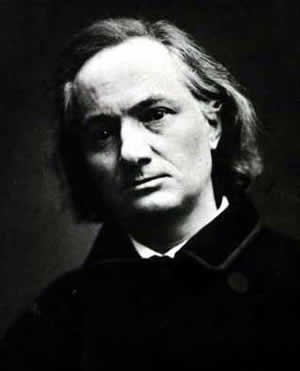 Charles Pierre Baudelaire ((1821 – 1867) was a French poet, essayist, and art critic. His most famous [and in my opinion by far his most stunning] work is  Les Fleurs du mal (The Flowers of Evil).  His work is greatly misunderstood, principally because it is chock a block with symbolic references the average reader is unlikely to understand.  Nor it would appear does the average literary critic, for example:

“His principal themes were the corruption of the city……, and wine. Notable in some poems is Baudelaire's use of imagery of the sense of smell and of fragrances, which is used to evoke feelings of nostalgia and past intimacy”.

Except that he doesn't.  Wine is not wine, wind is not wind, cities are not cities, perfumes are not perfumes.  You have to know your symbolism to understand Baudelaire.
It may help to know that Baudelaire was extremely interested in "correspondences", the many alternative symbolic words for underlying spiritual concepts.

His poetry dwells a great deal on women, for reasons that will become apparent shortly and he garnered considerable criticism for his apparent advocacy of "satanism".  But Baudelaire's satanism was like Aleister Crowley's satanism – non existent, but designed to annoy the institutions and 'isms' and to get people thinking.  He was a prolific drug taker and some of his poems owe a great deal to his drug-induced states of mind.  He was unsurprisingly a great critic of the 'establishment' and a great advocate of modern music and painting, for example, Manet, Wagner and  Delacroix.

Baudelaire was educated in Lyon, where he boarded. Later, he attended the Lycée Louis-le-Grand in Paris, studying law.  There, he began to frequent prostitutes and run up debts, mostly for clothes.  His stepfather tried to get him to pursue a career in law or diplomacy, but instead Baudelaire decided to embark upon a literary career. His mother said:

"Oh, what grief! If Charles had let himself be guided by his stepfather, his career would have been very different... He would not have left a name in literature, it is true, but we should have been happier, all three of us".

Well, no, not the three of you, but possibly just you and your husband.

His stepfather sent him on a voyage to Calcutta, India in 1841, in the hope of ending his dissolute habits, but although it proved an eye opener for him, Baudelaire returned to the taverns.  At twenty-one, he received a good-sized inheritance, but ‘squandered’ much of it within a few years  - I love squandering don't you? [note that this is the wording  of commentators, Baudelaire may have phrased it differently].

And it was at this time that Jeanne Duval became his mistress.

Jeanne Duval was a Haitian-born actress and dancer of mixed French and black African ancestry. They met in 1842 and the two remained together to the end of his life. Duval is said to have been the woman whom Baudelaire loved to distraction. He called her "mistress of mistresses" and his "Vénus Noire" 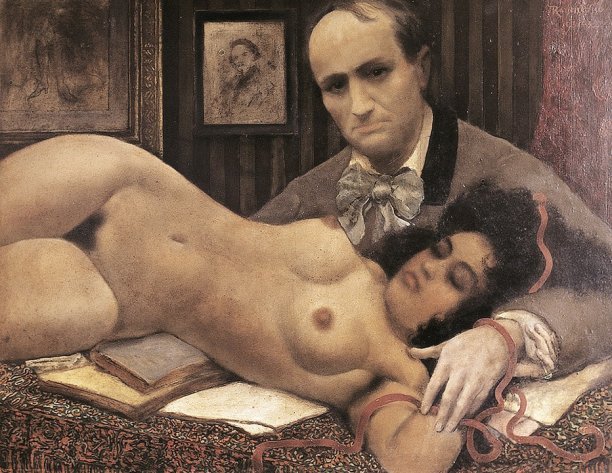 "Baudelaire and his muse" (1920) by Armand Rassenfosse.

The relationship was obsessive and totally draining for Baudelaire.  His mother thought Duval "tortured him in every way" and drained him of money at every opportunity.  She probably did, Baudelaire loved it, just what a poet needs.  He worshipped her, but she did indeed mentally torture him – the emotion generated by their love affair was intense, it positively zings off the page in his poems.

Baudelaire also had relationships with actress Marie Daubrun, and with courtesan Apollonie Sabatier, but though they were the  source of some inspiration, they never seemed to produce the intensity one can feel from his relationship with Duval. Only she gave him sexual experiences that resulted in spiritual experiences.

Through her,  he knew the spiritual.

Baudelaire was a “slow and fastidious worker, often sidetracked by indolence, emotional distress and illness”, more subjective criticism, from a non poet.  Poets wait for inspiration and for inspiration he needed Duval and to a lesser extent drugs.  It was not until 1857 that he published his first and most famous volume of poems, Les Fleurs du mal (The Flowers of Evil).

So to what do we owe this work of sublime genius?

Well, undoubtedly contributors were emotional pain, drugs notably laudanum and hashish [cannabis and marijuana], and great insecurity.  Baudelaire struggled with poor health and pressing debts all his lfe. He often moved from one lodging to another to escape creditors. But I think the greatest contribution was his relationship with Jeanne Duval.  Making love to excess.

So, excess, excess of every kind – pain and pleasure.  Overload.

Les Fleurs du mal  found a small, appreciative audience, but greater public attention was given to their subject matter. The effect on fellow artists was,  "immense, prodigious, unexpected, mingled with admiration and with some indefinable anxious fear".  But the general public was a dash less appreciative:

“The principal themes of sex and death were considered scandalous. He also touched on lesbianism, sacred and profane love, metamorphosis, melancholy,  lost innocence and the oppressiveness of living; the public were horrified!!!” 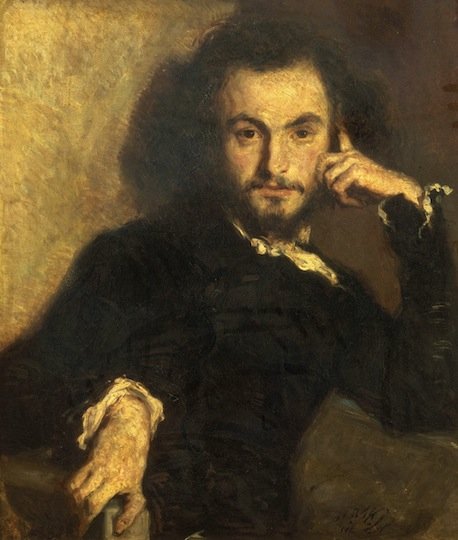 Baudelaire, his publisher and the printer were successfully prosecuted for creating 'an offense against public morals'. They were fined but Baudelaire was not imprisoned. Six of the poems were suppressed, but printed later as Les Épaves (The Wrecks)  Another edition of Les Fleurs du mal, without these poems, but with considerable additions, appeared in 1861. Many notables rallied behind Baudelaire and condemned the sentence.

Baudelaire next worked on a translation and adaptation of Thomas de Quincey's Confessions of an English Opium Eater.  Other works in the years that followed included  Les Paradis artificiels: opium et haschisch.  He was well placed to produce both.  He eventually turned to smoking opium.

By 1859, his illnesses, his long-term use of laudanum, his life of stress and poverty had taken its toll. His mother agreed to let him live with her for a while at Honfleur. Baudelaire was productive and at peace but his works then are not remembered and not memorable, sometimes pain works better than pleasure.

His financial difficulties returned after his publisher Poulet Malassis went bankrupt in 1861. In 1864, he left Paris for Belgium, partly in the hope of selling the rights to his works and also to give lectures, and in Brussels he began to drink to excess.

Both Duval and Baudelaire are reputed to have had syphilis.  But I have my doubts.  The symptoms he had are more in line with a surfeit of drugs than a surfeit of syphilis. Duval may have died of syphilis as early as 1862, five years prior to Baudelaire, but some sources claim that Duval survived Baudelaire.  Whatever her fate she went blind and was reduced to walking with crutches.

Baudelaire suffered a massive stroke in 1866 and paralysis followed.   The last two years of his life were spent, in a semi-paralyzed state, in "maisons de santé" in Brussels and in Paris, where he died on August 31, 1867. Baudelaire is buried in the Cimetière du Montparnasse, Paris.

What is perhaps intriguing is that Baudelaire lived a life of emotional overload from almost the day he was born.  He was thus a 'magician' by nature, an attribute he shares with Crowley who resembes him in a number of ways.

Overload of this kind, normally leads to illness and Baudelaire was ill for most of the time, he died aged 46, which may sound young, but given the excesses he practised is something of an achievement.

His poetry is stunning, absolutely stunning.