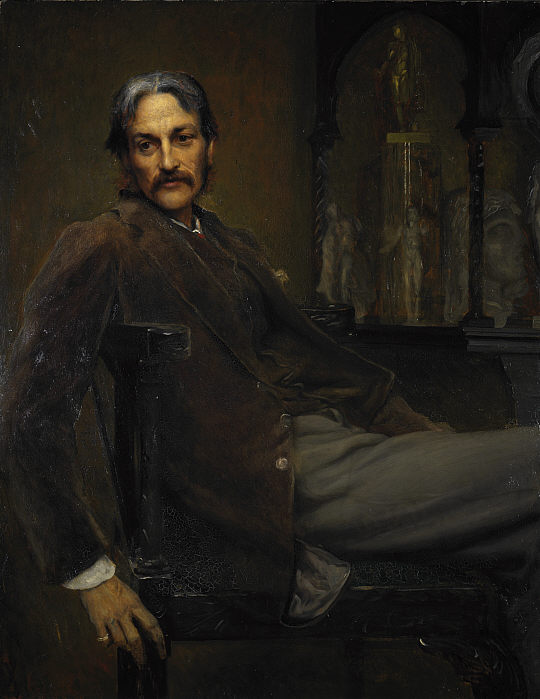 Andrew Lang FBA (1844–1912) was a Scottish poet, novelist, historian, literary critic, and contributor to the field of anthropology. It was thus very difficult to classify him for the site.

He became a fellow and subsequently honorary fellow of Merton College, Oxford and had a reputation as one of the most able and versatile writers of the day. In 1906, he was elected FBA.

Lang had a great interest in psychical research, was one of the founders of "psychical research", and his books include The Book of Dreams and Ghosts (1897), Magic and Religion (1901) and The Secret of the Totem (1905).

He served as President of the Society for Psychical Research in 1911.

Lang extensively cited nineteenth- and twentieth-century European spiritualism to challenge the idea of his teacher, Tyler, that belief in spirits and animism were inherently irrational. Lang used Tyler's work and his own psychical research in an effort to posit an anthropological critique of materialism.

The Andrew Lang lectures at the University of St Andrews are named after him. 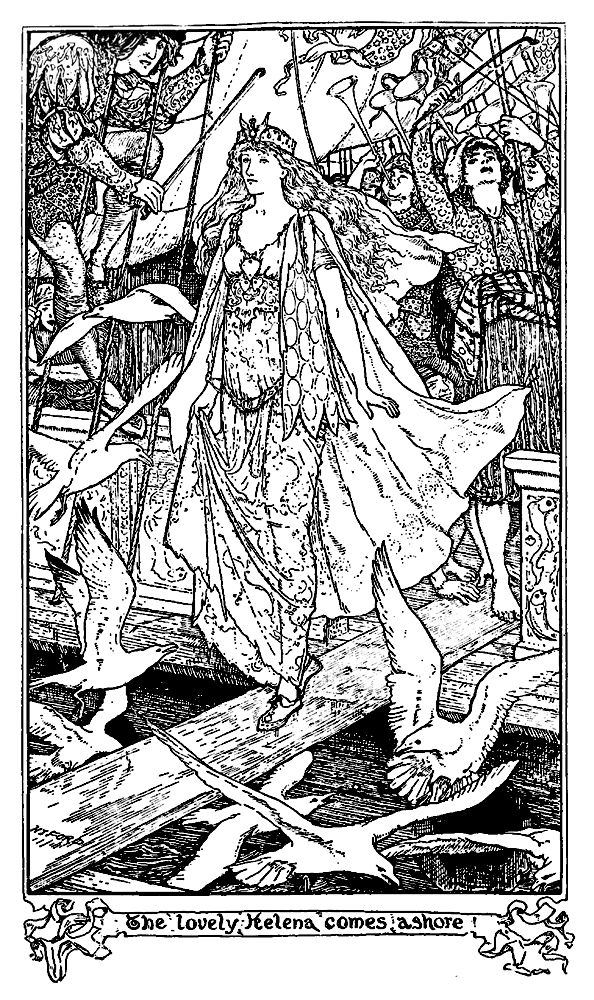 Lang’s first publication was a volume of ‘metrical experiments’, The Ballads and Lyrics of Old France (1872), and this was followed at intervals by other volumes of ‘dainty verse’, xxii. Ballades in Blue China (1880, enlarged edition, 1888), Ballads and Verses Vain (1884), selected by Mr Austin Dobson; Rhymes à la Mode (1884), Grass of Parnassus (1888), Ban and Arrière Ban (1894), and New Collected Rhymes (1905).  Later he wrote a tribute to the very eccentric mystic Gerard de Nervil

Of all that were thy prisons--ah, untamed,
Ah, light and sacred soul!--none holds thee now;
No wall, no bar, no body of flesh, but thou
Art free and happy in the lands unnamed,
Within whose gates, on weary wings and maimed,
Thou still would'st bear that mystic golden bough
The Sybil doth to singing men allow,
Yet thy report folk heeded not, but blamed.
And they would smile and wonder, seeing where
Thou stood'st, to watch light leaves, or clouds, or wind,
Dreamily murmuring a ballad air,
Caught from the Valois peasants, dost thou find
A new life gladder than the old times were,
A love more fair than Sylvie, and as kind? 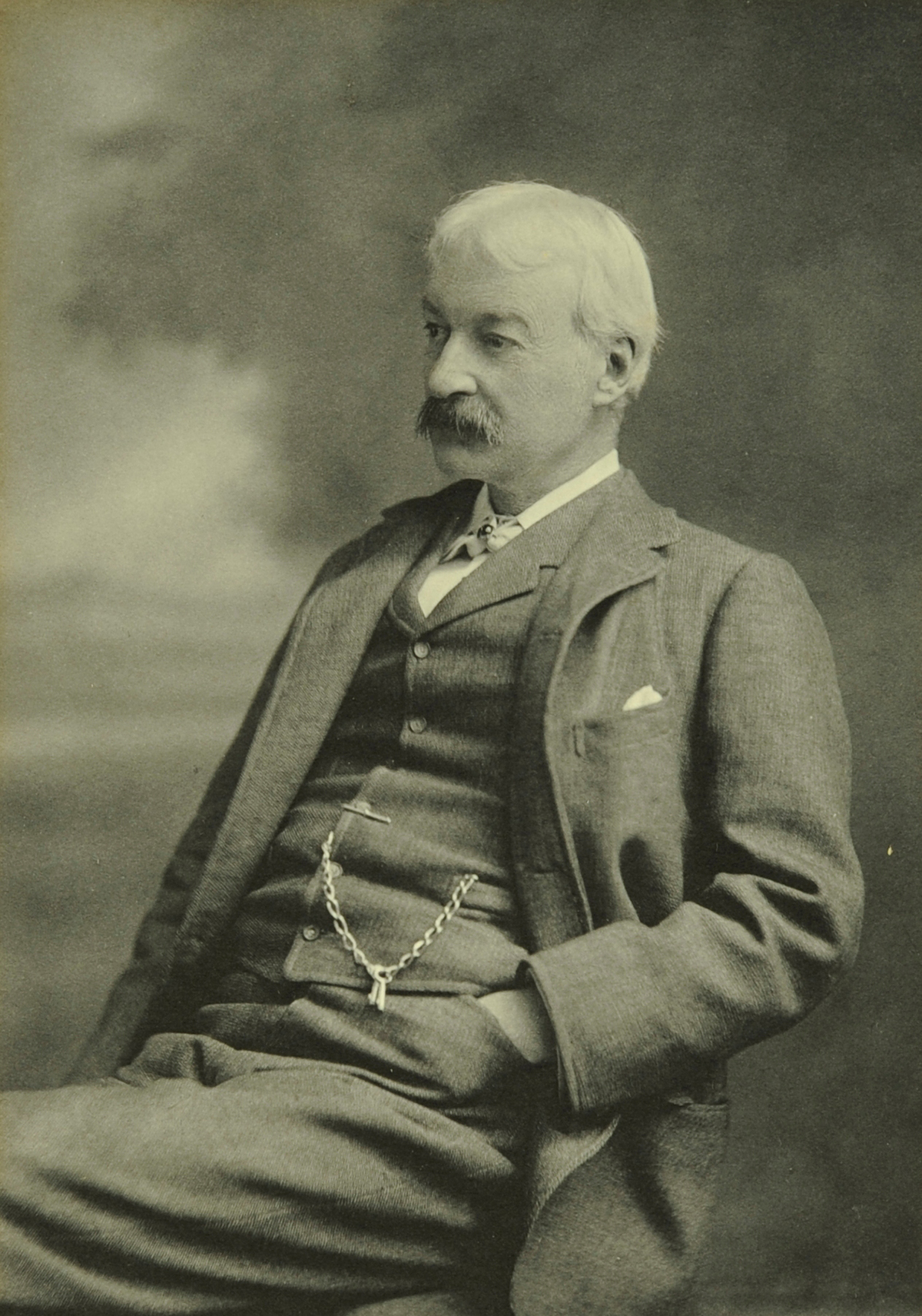 His purely journalistic activity was from the first of a varied description, ranging from sparkling “leaders” for the Daily News to miscellaneous articles for the Morning Post, and for many years he was literary editor of Longman's Magazine; no critic was in more request, whether for occasional articles and introductions to new editions or as editor of dainty reprints. 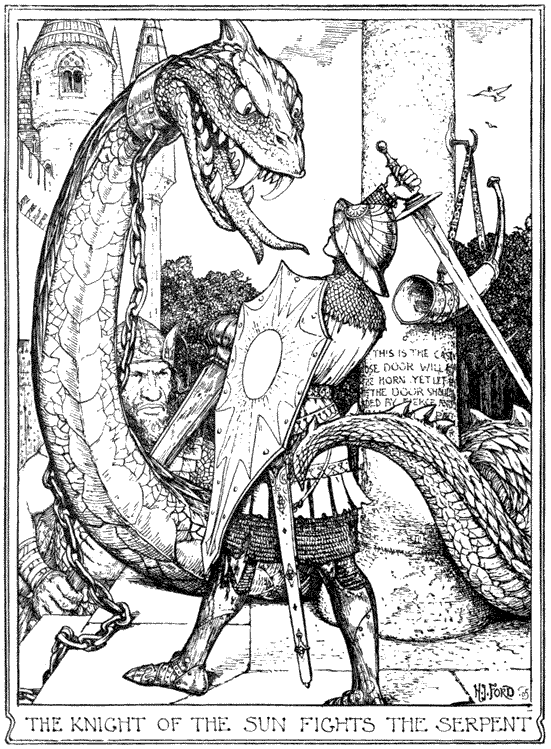 A Monk of Fife (1896) is a fictitious narrative purporting to be written by a young Scot in France in 1429-1431.  Other novels include

In 1900 he began a History of Scotland from the Roman Occupation, the fourth volume of which (1907) brought Scottish history down to 1746. The Valet's Tragedy (1903), which takes its title from an essay on the “Man with the Iron Mask,”, collects twelve papers on historical mysteries. 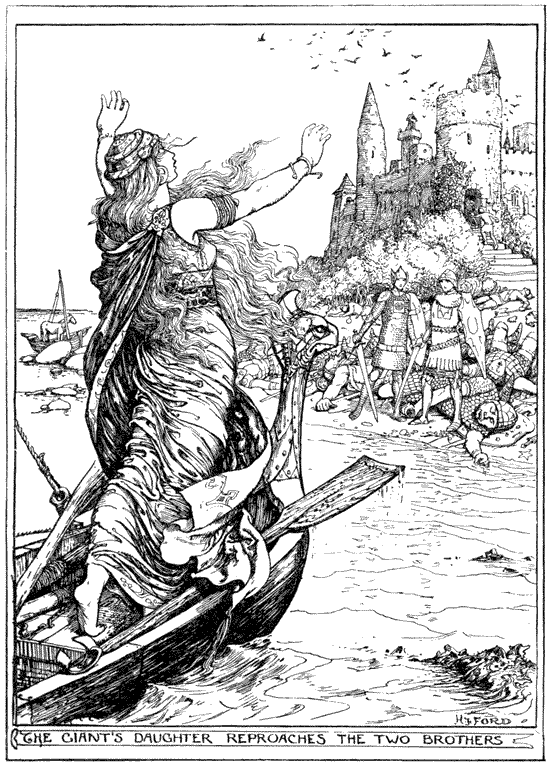 Lang collaborated with S. H. Butcher in a prose translation (1879) of the Odyssey, and with E. Myers and Walter Leaf in a prose version (1883) of the Iliad, both of them ‘remarkable for accurate scholarship and excellence of style’.  His Homer and the Epic appeared in 1893; a new prose translation of The Homeric Hymns in 1899, with ‘essays literary and mythological’, and his Homer and his Age in 1906.

Rider Haggard developed a fervent interest in telepathy and spiritual experience, even having an experience himself.  His books are infused with his beliefs in this respect, and he was involved in the SPR.  Three of Haggard's novels were written in collaboration with his friend Andrew Lang.

To the study of Scottish history Mr Lang brought a scholarly care for detail, a piquant literary style, and a gift for disentangling complicated questions. The Mystery of Mary Stuart (1901, new and revised ed., 1904) was a consideration of the fresh light thrown on Mary's history by the Lennox MSS. in the University library, Cambridge, strengthening her case by restating the perfidy of her accusers.
He also wrote monographs on The Portraits and Jewels of Mary Stuart (1906) and James VI. and the Gowrie Mystery (1902). The somewhat unfavourable view of John Knox presented in his book John Knox and the Reformation (1905) aroused considerable controversy.
He gave new information about the continental career of the Young Pretender in Pickle the Spy (1897), an account of Alastair Ruadh Macdonell, whom he identified with Pickle, a notorious Hanoverian spy.
This was followed in 1898 by The Companions of Pickle, and in 1900 by a monograph on Prince Charles Edward. ……………….. 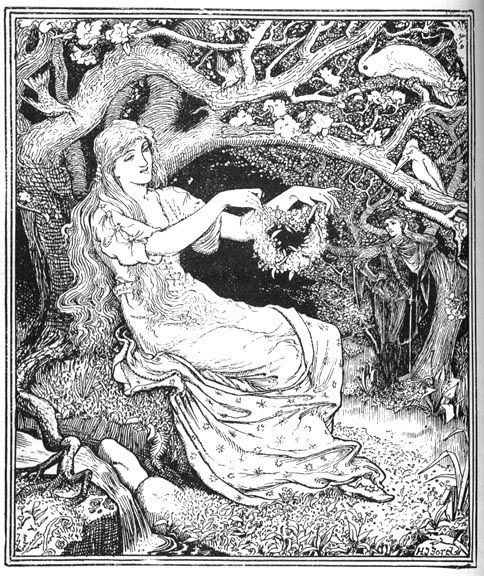 He edited The Poems and Songs of Robert Burns (1896), and was responsible for the Life and Letters (1897) of J. G. Lockhart, and The Life, Letters and Diaries (1890) of Sir Stafford Northcote, first earl of Iddesleigh.

And he wrote a biography of D D Home…….

Home …. has been described to me, by a lady who knew him in his later years, when he had ceased to work drawing-room miracles in society, as a gentle, kindly, quiet person, with no obvious fault, unless a harmless and childlike vanity be a fault.

Lang is now chiefly known for his publications on folklore, mythology, and religion. The interest in folklore was from early life; he read John Ferguson McLennan before coming to Oxford, and then was influenced by E. B. Tylor.  But on 17 April 1875, Lang married Leonora Blanche Alleyne, youngest daughter of C. T. Alleyne of Clifton and Barbados. 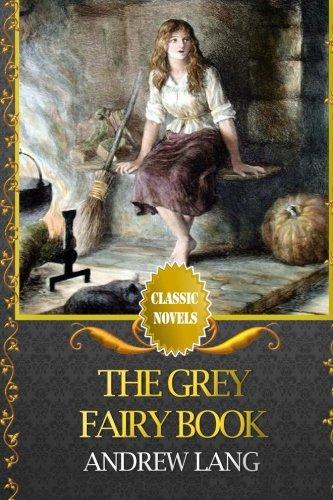 She was (or should have been) variously credited as author, collaborator, and translator of Lang's Colour/Rainbow Fairy Books which he edited.   As such Lang’s wife did all the research and translation whilst Lang brought an anthropologist’s  - a scientist’s viewpoint -  to the study of the myths, stories and legends they collected.  The enjoyment given to numerous people by the stories alone was, as it were, icing on the cake.  His Blue Fairy Book (1889) was a beautifully produced and illustrated edition of fairy tales that has become a classic.  In the preface of the Lilac Fairy Book he credits his wife with translating and transcribing most of the stories in the collections.

Some of the books he studied are indeed now famous - The Strife of Love in a Dream, Being the Elizabethan Version of the First Book of the Hypnerotomachia of Francesco Colonna (1890) is on this site and is an extraordinary collection of symbols and concepts woven into a story of the Spiritual path.

Mr Lang's versatility was also shown in his valuable works on folk-lore and on primitive [sic] religion. The earliest of these works was Custom and Myth (1884); and in Myth, Literature and Religion (2 vols., 1887, French trans., 1896) …. in The Making of Religion … he maintained the existence of high spiritual ideas among savage [sic] races, and instituted comparisons between savage [sic] practices and the occult phenomena among civilized races; he dealt with the origins of totemism (q.v.) in Social Origins, printed (1903) together with J. J. Atkinson's Primal Law. …………His Blue Fairy Tale Book (1889), beautifully produced and illustrated, was followed annually at Christmas by a book of fairy tales and romances drawn from many sources. 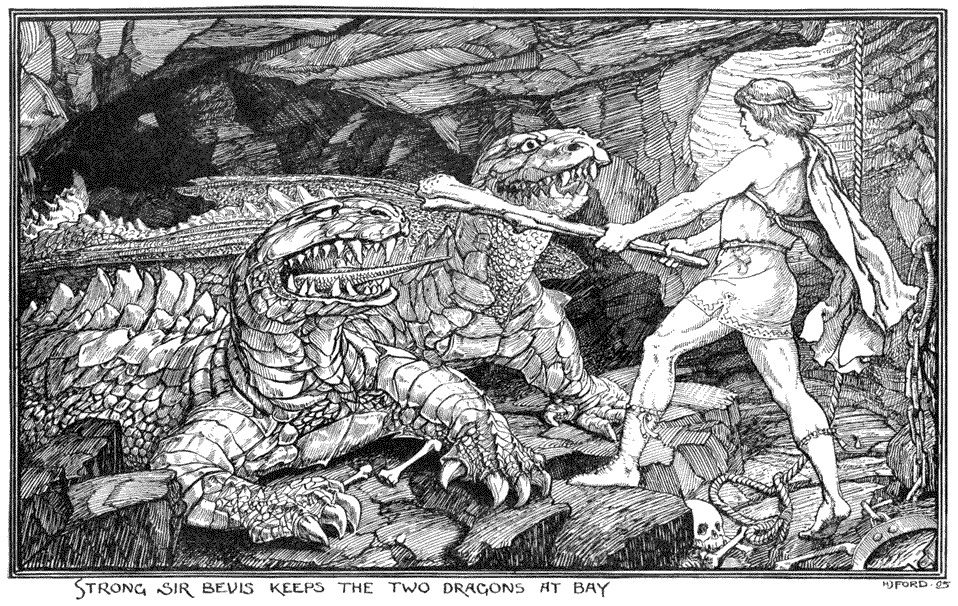 British man of letters, was born on the 31st of March 1844, at Selkirk, Scotland. He was educated at the Edinburgh Academy, St Andrews University and at Balliol College, Oxford, where he took a first class in the final classical schools in 1868, becoming a fellow and subsequently honorary fellow of Merton College.
As a journalist, poet, critic and historian, he soon made a reputation as one of the ablest and most versatile writers of the day.

He died of angina pectoris on 20 July 1912 at the Tor-na-Coille Hotel in Banchory, survived by his wife. 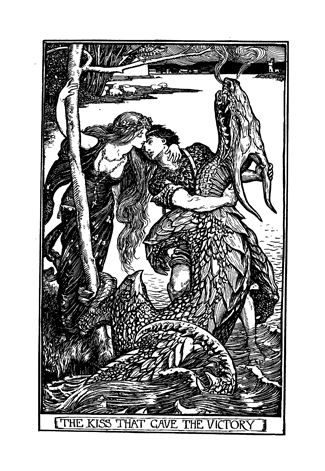 The windy lights of Autumn flare;
I watch the moonlit sails go by;
I marvel how men toil and fare,
The weary business that they play!
Their voyaging is vanity,
And fairy gold is all their gain,
And all the winds of winter cry,
“My Love returns no more again.”

There are observations from Andrew Lang all over the site generally collected by him, but placed under the name of the actual experiencer.  But we have included a few miscellaneous ones here.  One is by his own niece.