The Spirit being of flowering plants and trees.  Synonyms for Fairy include 'White dwarf' or Light Alf – Liosalfa. 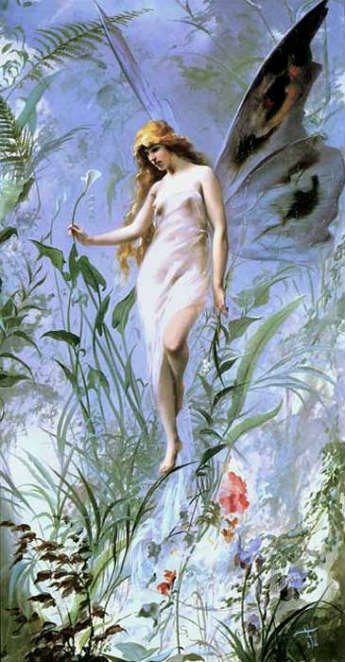 At one time if these spirits were ‘seen’ they did not have the appearance that we attribute them with today.

But it is noticeable that the imagery we have created – the wings and the frail etheric bodies, is now fed back to us as a Template if we have visions of these beings.  Thus if we eat the fruit of a flowering plant, for example, and have a dream, we may well see the very images of the plant that man has created.

The origin of the word fairy is not definitively known. Thomas Keightley believed the word probably derived from the Persian /Arabic word Peri pronounced Feri, but as the word fairy or fee is primarily used in the French and English languages it could be French or Latin in origin.  There is a Latin word fatum or fatis, there is also the old French word faer, feer ‘to enchant’ hence an ‘enchantress’ – faerie or feerie.

The word faerie was initially used to describe the ‘land of the fays’ – the land of the enchanted ones – which is a good description for the spirit world to which one is catapulted when one consumes a hallucinogenic or similar plant.  In Italy, the word used was Fata and it is Fada in Spain; Feen or Feiner in Germany.

It is Feroher in Ancient Persian – but Feroher covered a whole range of Spirital Beings not just those related to plants.

Fairies are not always the jolly, pretty flighty little fairies of the Cecily Mary Barker books.  Many of the fairies are ‘male’ [I use the term loosely], a number of them are not all that pleasant at all and occasionally they can be downright nasty, particularly if they feel they have been contacted by an ignoramus who has only taken the plant for a joy ride and not for edification.  They can be hugely dismissive and scornful of the ignorant and quite often give the user a terribly painful lesson.

But there are also flower fairies that are seen in non drug induced visions, or by people who are far more aware of the spiritual implications,  seen via the Bridge of pollen, and often in dreams, that seem more benign and gentle.