W.Y. Evans-Wentz - The Fairy-Faith in Celtic Countries - The Druids

The arrival of the Tuatha Dé Danann by Jim Fitzpatrick 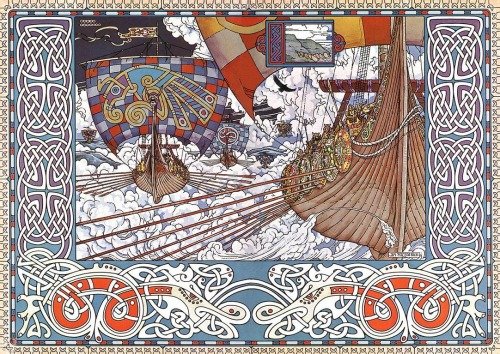 ……………. The early Celts recognized an intimate relationship between man and nature: unperceived by man, unseen forces--not dissimilar to what Melanesians call Mana…..guided every act of human life.

It was the special duty of Druids to act as intermediaries between the world of men and the world of the Tuatha De Danann; …. As long as man kept himself in harmony with this unseen fairy-world of Nature, all was well; but as soon as there was disharmony in the relationship--which was focused in a king or hero--… death was inevitable and not even the Tuatha De Danann could intercede…. Breaking of a royal or hero ‘taboo’ not only affected the violator, but his subjects or followers as well.

Professor Georges Dottin, who has made a special study of the historical records concerning Druidism, writes:--'
The Druids of Ireland appear to us above all as magicians and prophets. They foretell the future, they interpret the secret will of the fées (fairies), they cast lots’
.

………….The ancient druidical doctrine stated that through control of fairies or daemons, Druids or magicians could control the weather and natural phenomena connected with vegetable and animal processes, could cast spells, could divine the future, and could execute all magical acts……

Magic was the supreme science because it raised its adepts out of the ordinary levels of humanity to a close relationship with the gods and creative powers. Nor was it a science to be had for the asking, 'for many were the wand-bearers and few the chosen.'

Roman writers tell us that neophytes for the druidic priesthood often spent twenty years in severe study and training before being deemed fit to be called Druids.

We need not, however, in this study enter into an exposition of the ordeals and trials of candidates seeking magical training, or else initiation into the Mysteries. There were always two schools to which they could apply, directly opposed in their government and policy--the school of white magic and the school of black magic.

……….The great schools known as the Mysteries were of white magic, in so far as they practised the art; and such men as Pythagoras, Plato, and Aeschylus, who are supposed to have been initiated into them, always held them in the highest reverence, though prohibited from directly communicating anything of their esoteric teachings concerning the origin and destiny of man, the nature of the gods, and the constitution of the universe and its laws