Joseph Noel Paton - The Reconciliation of Titania and Oberon 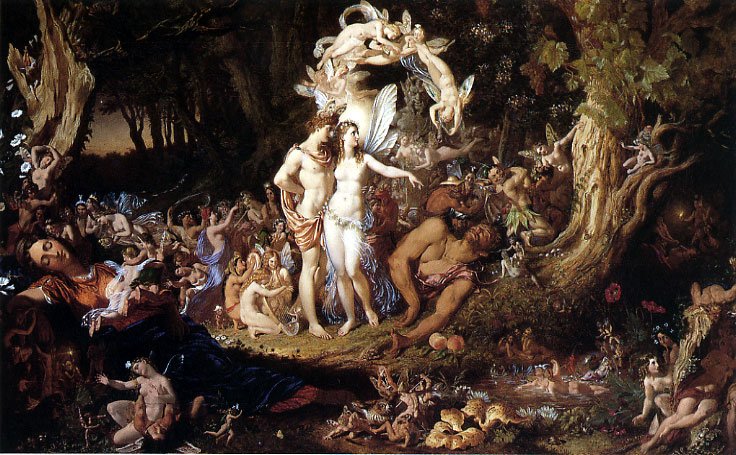 Sluagh, "hosts," the spirit-world. The "hosts" are the spirits of mortals who have died. . . . According to one informant, the spirits fly about in great clouds, up and down the face of the world like the starlings, and come back to the scenes of their earthly transgressions. No soul of them is without the clouds of earth, dimming the brightness of the works of God, nor can any win heaven till satisfaction is made for the sins of earth.'

We introduce now as a Witness Donald McKinnon, ninety-six years old, a piper by profession; and not only is he the oldest man on Barra, but also the oldest man among all our witnesses He was born on the Island of South Uist, one of the Western Hebrides north of Barra, and came to Barra in 1836, where he has lived ever since. In spite of being four years less than a hundred in age, he greeted us very heartily, and as he did not wish us to sit inside, for his chimney happened not to be drawing very well, and was filling the straw thatched Cottage with peat smoke, we sat down outside on the grass and began talking; and as we Came to fairies this is what he said:--

Nature of Fairies.--I believe that fairies exist as a tribe of spirits, and appear to us in the form of men and women.

People who saw fairies can yet describe them as they appeared dressed in green. No doubt there are fairies in other countries as well as here.