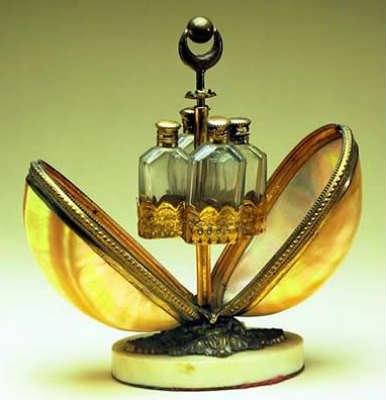 Perfume can simply symbolically mean spiritual experience - a whiff of heaven!  But there is another intriguing side to perfume that is not symbolic but 'actual'.

Occasionally in spiritual experience people can smell glorious perfume smells, the smell is unlike any smell that exists in 'reality' often a sort of mix of flowers and trees.  It appears to be given to people who are not blessed with the gift of vision, or whose gifts lie elsewhere [intuition, healing, wisdom, inspiration etc] or are directed by the spiritual world elsewhere because their destiny is not helped by visionary experience.

For those who have been given a serious challenge and who are largely alone on this challenge, the restriction of experience to only invisible input can be at times deeply depressing.  There is no real confirmation that everything you are getting isn't just some flight of fancy or mental hiccup.

But somehow smelling that smell says, 'you are not alone'.

I have no idea whether the perfume is a universal one or not - a single smell used on all occasions for everyone, or whether we  each get a different perfume.  But I have noticed that there is possibly more than one perfume - perhaps one for each spirit helper so that you can recognise them.  I am guessing, but it is a reasonable hypothesis to work with until someone comes up with a better idea.