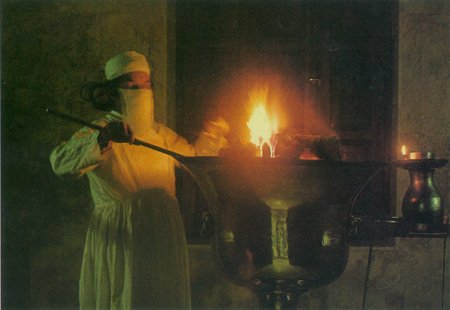 One of the more common technical terms - in use - for a Zoroastrian fire temple is dar be-mehr, romanized as darb-e mehr or dialectically slurred as dar-e mehr. The term means 'Mithra's Gate'.

Mithra is the Sun, symbolically, as such the temple, looked on in terms of the spiritual path, was ‘the route to the Sun’. Comparing the red route and the blue route, this was the red route.  Among present-day Iranian Zoroastrians, the term darb-e mehr includes the entire ritual precinct, as such there is built in to the name a direct indication that this is the place one goes to for spiritual progression.

When the adherent enters the antechamber before a fire sanctum he or she will offer bone-dry sandalwood (or other sweet smelling wood) to the fire. This is in accordance with doctrinal statutes expressed in Vendidad 18.26-27, which in addition to enumerating which fuels are appropriate, also reiterates the injunctions of Yasna 3.1 and Yashts 14.55 that describe which fuels are not (in particular, any not of wood).

Perfume is a symbolic term.  But here it has been turned into a symbolic and very pleasant act.

Perfume can simply symbolically mean spiritual experience - a whiff of heaven!  But there is another intriguing side to perfume that is not symbolic but 'actual'.

Occasionally in spiritual experience people can smell glorious perfume smells, the smell is unlike any smell that exists in 'reality' often a sort of mix of flowers and trees.  It appears to be given to people who are not blessed with the gift of vision, or whose gifts lie elsewhere [intuition, healing, wisdom, inspiration etc] or are directed by the spiritual world elsewhere because their destiny is not helped by visionary experience.

For those who have been given a serious challenge and who are largely alone on this challenge, the restriction of experience to only invisible input can be at times deeply depressing.  There is no real confirmation that everything you are getting isn't just some flight of fancy or mental hiccup.

But somehow smelling that smell says, 'you are not alone'.