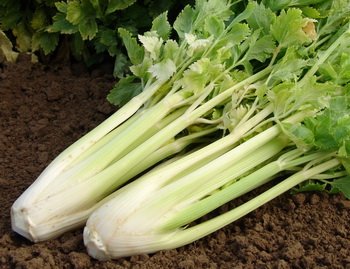 Celery (Apium graveolens) is a plant variety in the family Apiaceae, used as a vegetable.

My father used to grow celery and the ground on which he grew it was ideal being well drained, but moist and very friable.  In the UK, the Fens in the East of England is reclaimed marshland and produces almost perfect celery, nutty, crisp, and full of flavour. 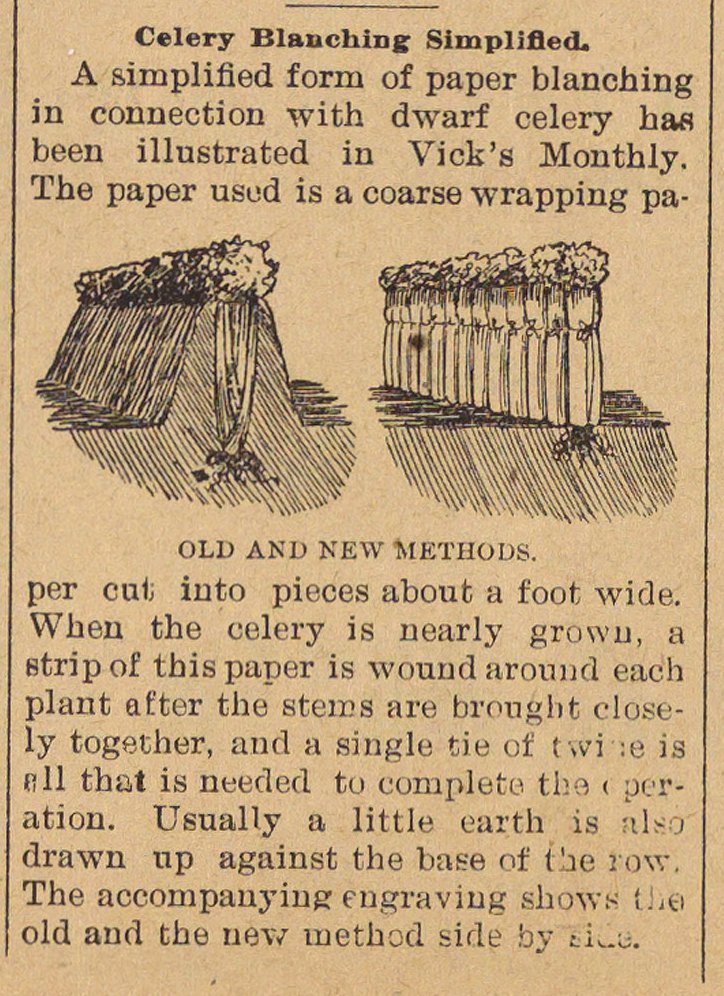 my Dad was clearly old fashioned!

When we were children, Sunday supper consisted of things like home made sausage rolls or Cornish pasties, with home grown tomatoes and celery and cheese.  We used to eat the root and all of the stem up to the leaves.  My Mum used to make soups with the leaves, which are a bit bitter, but make a lovely vegetable broth with onions.

What we didn't know then is how good for you celery is.  My brother and I just thought it was a nice food.  My father used to blanch his celery by the old method of earthing it up and I still prefer blanched celery to the green celery. 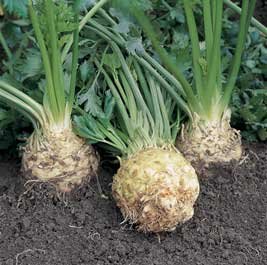 In the Mediterranean Basin, celeriac grows wild and originated there.  It  seems to do better in less hostile climates, whereas celery does not mind the cold at all, in fact it always seemed to taste better after it had had a hard frost.  Hard frosts are quite common in the Fens, the East of England and places like Denmark and the Netherlands, where celery thrives. 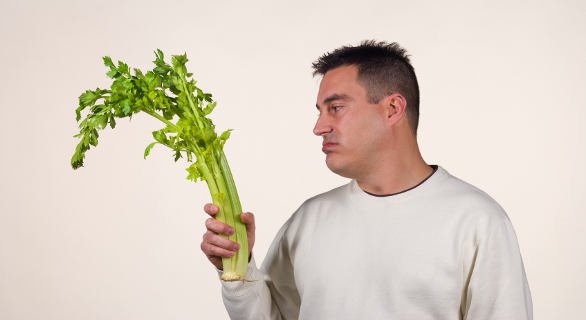 One of the strangest uses of celery medicinally recently has been as an anti-dote to the side-effects of pharmaceuticals and toxins, including heavy metals, on men's ability to produce sperm, an erection and self respect!

Many pharmaceuticals and toxins appear to have a quite devastating effect on men's testes, shrinking them, damaging them sometimes irreversibly, or if not completely knobbling them, then making their sperm unviable or damaged - producing damaged babies.

The website eHealthme has a list of drugs as long as your arm that have produced Infertility  - see LINK.  And there is another list for impotence - see LINK, as such celery may offer real hope to these pharmaceutically altered men.  This takes on particular relevance when one sees where testicular cancer is most prevalent - in the countries where pharmaceuticals and toxins predominate, see chart below. 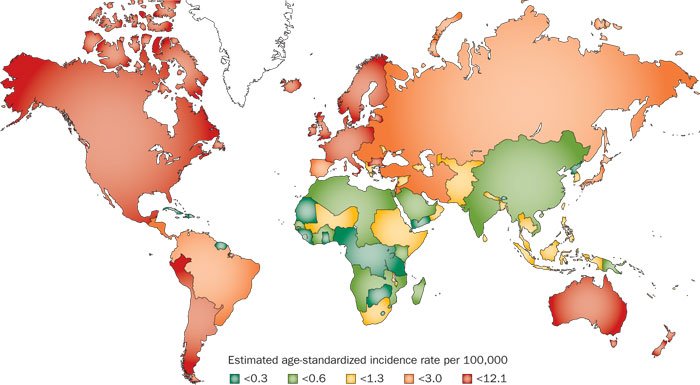 In case you should wonder why Alaska of all places has such a high incidence, it may have something to do with the Red Dog lead and zinc mine.

The use of celery seed for relieving pain was described by Aulus Cornelius Celsus around AD 30. 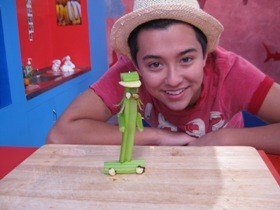 Since my childhood, when the only chest disease we knew of was provoked by the smogs and bad air quality, celery along with peanuts has emerged as a food that can provoke asthma and the most severe allergic reactions; for people with celery allergy, exposure can cause potentially fatal anaphylactic shock.

Celery root—commonly eaten as celeriac, or put into drinks—is "known to contain more allergen than the stalk. Seeds contain the highest levels of allergen content".

As I explain in the section on food allergies and that on asthma and allergies, no food is inherently allergic.  We only develop a reaction to it when one of two things happen:

I have not yet been able to work out which of these apply and what is the guilty chemical.  Wikipedia provides a handy list of vaccine ingredients, so maybe someone else can spot a similarity with a celery protein I have missed.  It may be latex - see Vaccines. Another option is formaldehyde.  According to Dr Duke's plant database, amongst the irritants that celery possesses formaldehyde is one chemical: 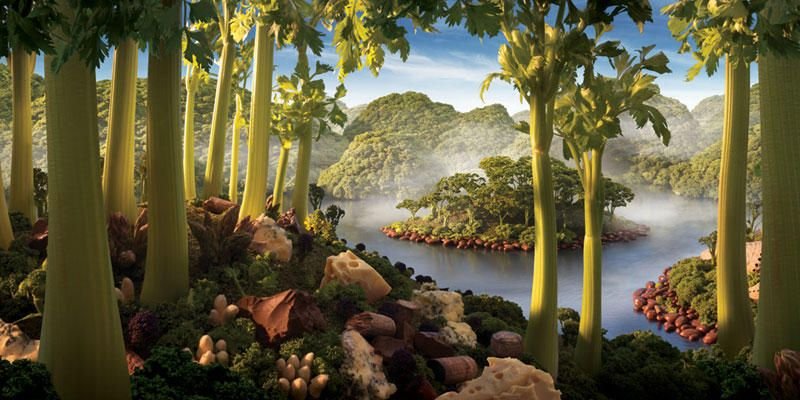 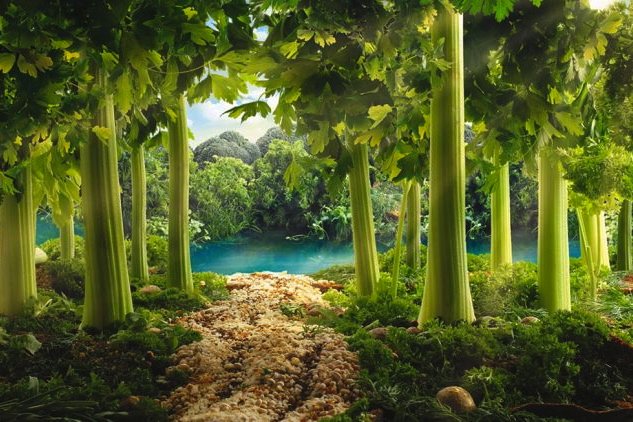 If you now turn to the section on E numbers and vaccines, you will find that formaldehyde is E240 and found in :

So there is a likelihood that people who have had these vaccines might develop an allergic reaction.  The answer, of course, is to get tested - sooner rather than later.

This too may help those with a better grasp of the subject than me.

Allergy diagnosis relying on the determination of specific IgE is frequently complicated by the presence of cross-reacting IgE of unclear clinical relevance. Particularly, the anaphylactogenic activity of IgE directed to cross-reactive carbohydrate moieties of glycoproteins from plants and invertebrates has been a matter of debate. In this study, we present the biochemical and immunological characterization of Api g 5, a glycoprotein allergen from celery with homology to FAD containing oxidases. Carbohydrate analysis of the allergen revealed the presence of glycans carrying fucosyl and xylosyl residues, structures previously shown to bind IgE. Chemical deglycosylation of the protein completely abolished binding of serum IgE from all 14 patients tested. 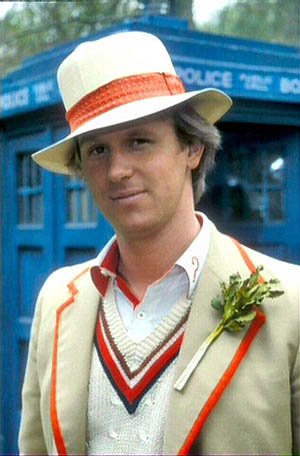 Likewise, basophils from a patient allergic to mugwort pollen and celery were stimulated only by native Api g 5, whereas the deglycosylated allergen did not trigger release of histamine. IgE inhibition immunoblots showed that native Api g 5 other than the deglycosylated protein completely inhibited IgE binding to high molecular weight allergens in protein extracts from birch pollen, mugwort pollen, and celery. A similar inhibition was accomplished using the IgE binding oligosaccharide, MUXF, coupled to bovine serum albumin. All these observations taken together confer convincing evidence that IgE directed to cross-reactive carbohydrates is capable of eliciting allergic reactions in vivo. PMID: 12958180

Just as a little final bit of information.  Celery is an alternative to the palm tree, as a symbol of kundalini experience.  Maybe this is why, in the television program Doctor Who, the Fifth incarnation of The Doctor (played by Peter Davison), was noted for wearing a stalk of celery on his lapel, claiming it at one point to be an excellent 'restorative' or maybe the writer knew about the testicular activity ..... or both!! 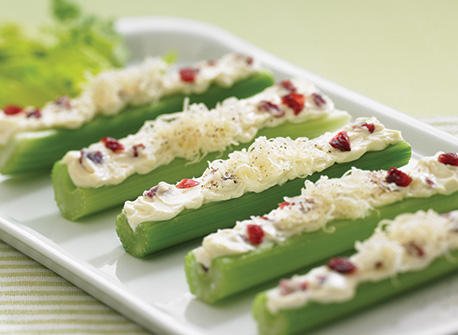 You can stuff celery to make an appetiser or snack, you can liquidise it with spinach and yoghurt to make a lovely drink.

You can eat it in a salad with apples and nuts or chick peas; or with potatoes and sweetcorn.  You can use it on a simple cheese board with biscuits. 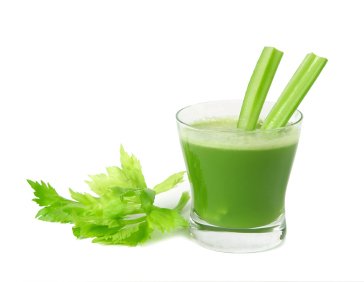 It goes well in most winter style stews with squashes and game meat;  and not a few summer stews with new potatoes spring onions and chicken.  One of the nicest stews I have had used chicken legs, walnuts [added at the last minute], light stock, orange rind cut into thin strips and celery strips. 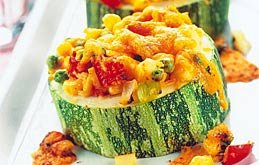 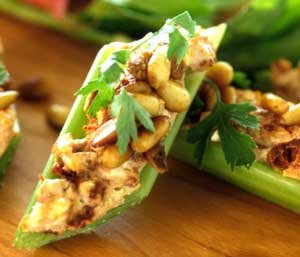 1  Preheat the oven to 200C/400F/Gas 6. Lightly grease a large baking dish or baking sheet with a teaspoon of the olive oil.
2  Heat the remaining oil in a large frying pan and saute the onion, celery and pepper for 3-4 minutes, until softened. Remove from the heat and stir in the sweetcorn and peas. Reserve a couple of tablespoons of the breadcrumbs, then stir the rest into the vegetables with the Lancashire or Cheshire cheese and chives or parsley. Season.
3  Arrange the marrow slices in the baking dish or on the baking sheet. Pack with the vegetable mixture. Sprinkle with the reserved breadcrumbs and grated cheese.
4  Cover with foil and bake for 25-30 minutes, removing the foil for the final 10 minutes so that the tops brown. 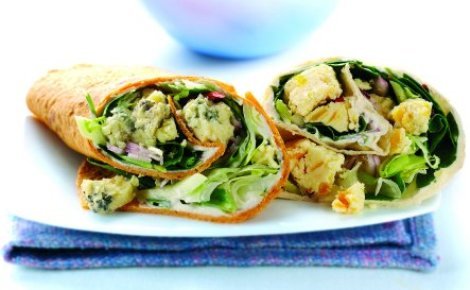 You can put it in wraps, and here we have Stilton and Celery wraps courtesy of the British cheese board.

"Spread an equal amount of soft cheese over each wrap. Scatter shredded lettuce, celery and onion over each wrap - but not too close to the edge, add crumbled stilton and roll up.

Cook's Tip: Before you eat the wraps, make sure that the Stilton has had time to reach room temperature for a full, mellow flavour." 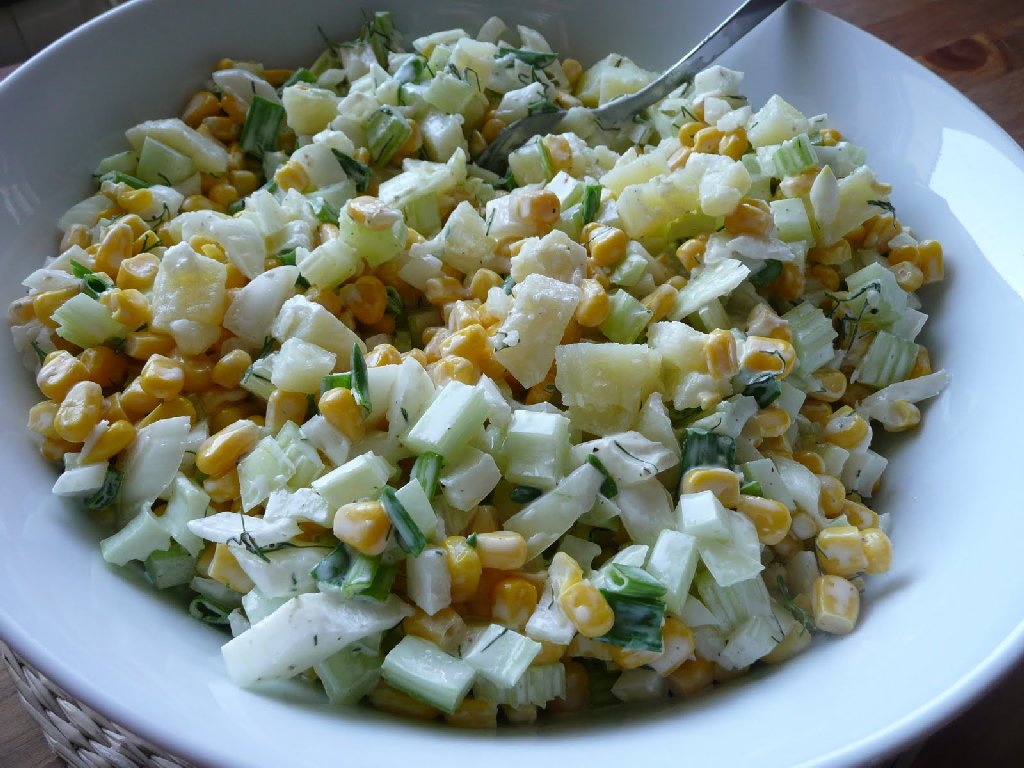 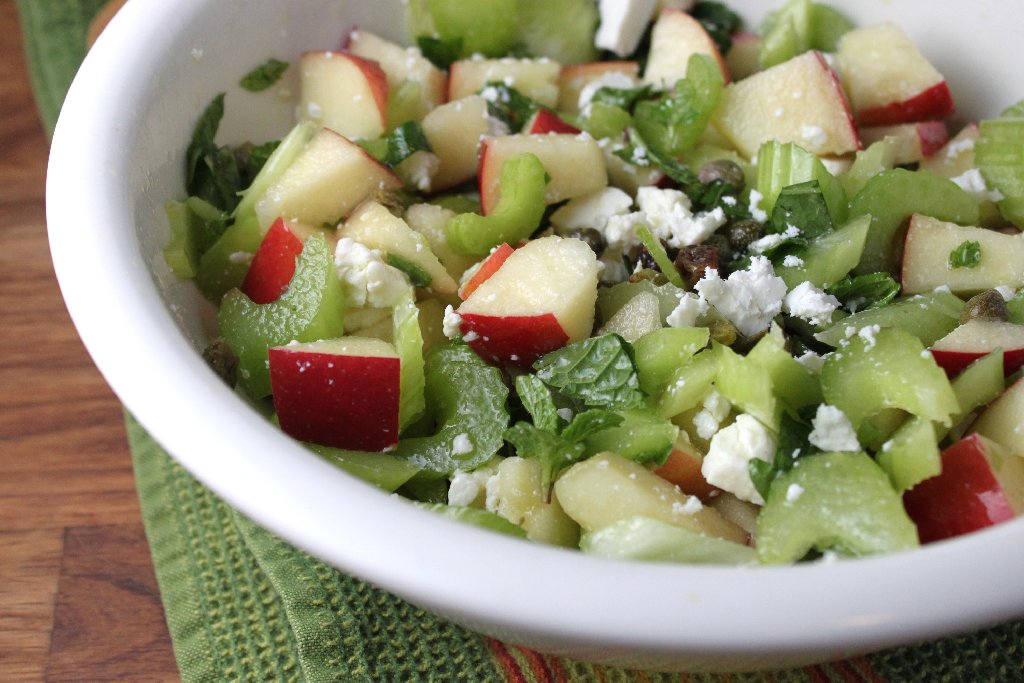 What is good about celery is that it goes with just about anything and tastes delicious.

It goes with olives, especially black olives and red peppers.

But it also goes with green peppers and can be used with granny smith apples [or similar green apple] to equally good effect.

Celery sticks stuffed with peanut butter are a good picnic staple for children of all ages.....

A julienne [sticks] of potato and celery, dotted with butter and a little water, wrapped in foil and slow cooked in the oven make a lovely vegetable side dish.

Celery seeds can be used as flavouring or spice, either as whole seeds or ground and mixed with salt, as celery salt. Celery salt is used as a seasoning, in cocktails (notably to enhance the flavour of Bloody Mary cocktails), on the Chicago-style hot dog, and in Old Bay Seasoning.  Celery, onions, and bell peppers are the "holy trinity" of Louisiana Creole and Cajun cuisine. Celery, onions, and carrots make up the French mirepoix, often used as a base for sauces and soups. Celery is a staple in many soups, such as chicken noodle soup. 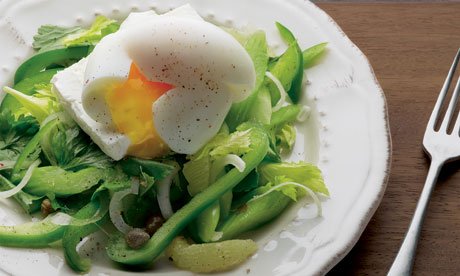 Celery with an egg, peppers and feta cheese

According to Dr Duke's plant database, the different parts of the celery plant each have different chemicals and thus different properties.

He lists well over 800 items, too many to list here and there is no point as you can go to Dr Duke's database to get the full list.

The list I have shown here was derived from the USDA Nutrient Database.  It comes from Wikipedia and they have added Percentages, which are roughly approximated using US recommendations for adults. 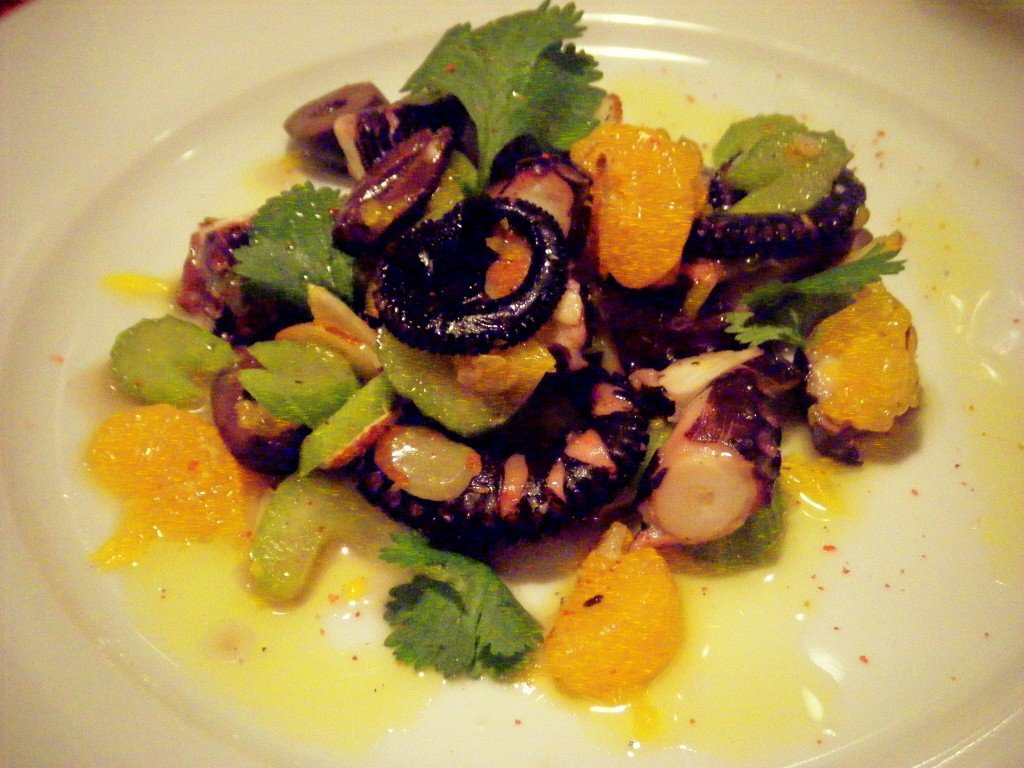