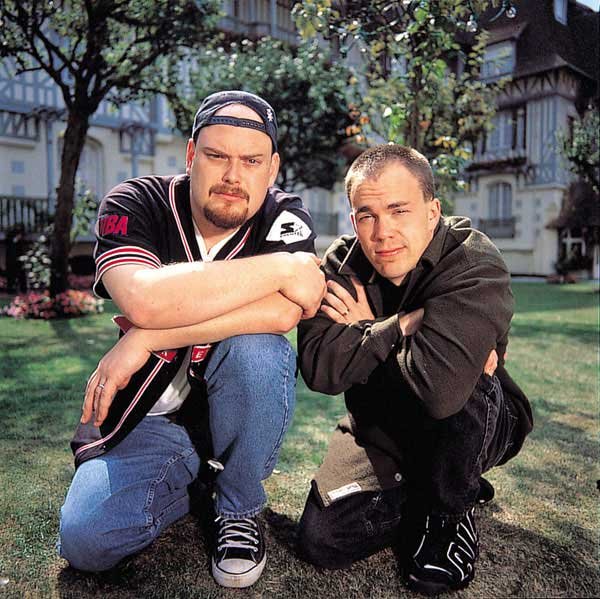 Raised by a "hardcore atheist" father and an "ex-Catholic turned Shamanist" mother, the duo once described their religious beliefs as ‘non-denominational’. Lana is a vegetarian.

They made their directing debut in 1996 with Bound, and reached fame with their second film The Matrix (1999), for which they won the Saturn Award for Best Director. They wrote and directed its two sequels The Matrix Reloaded and The Matrix Revolutions (both in 2003), and were heavily involved in the writing and production of other works in the franchise. 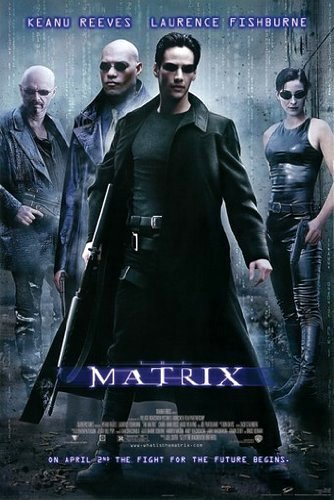 Following the commercial success of the Matrix series, they wrote and produced the 2006 film V for Vendetta (an adaptation of the comic of the same name by Alan Moore), and in 2008 released the film Speed Racer, which was a live action adaptation of the Japanese anime series, Speed Racer. Their most recent film, Cloud Atlas, based on the novel of the same name by David Mitchell and co-written and co-directed by Tom Tykwer, was released on October 26, 2012. Their next film Jupiter Ascending and their television series Sense8 will debut in 2015.

Rumors that Lana Wachowski, then still identifying as Larry, was ‘transitioning’ from male to female spread in the early 2000s, though neither sibling spoke directly on the subject at the time.  Most people assume that this was a sex change, but in fact it is a symbolic act – she/he has become androgynous – which if true is a considerable achievement spiritually.

Andy has been married to Alisa Blasingame since 1991. Lana, while still identifying as Larry, married Thea Bloom in 1993; but they divorced in 2002. He subsequently began dating Karin Winslow; and they married in 2009. Winslow is a board member of the Chicago House and Social Service Agency. 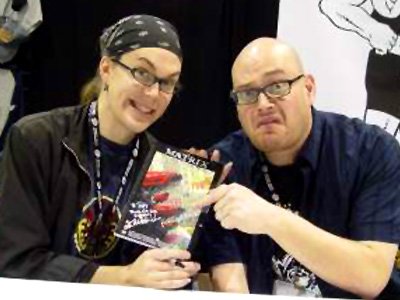 The Wachowskis at the San Diego ComicCon in 2004.

In his/her acceptance speech he/she revealed that she had considered committing suicide once in her youth.

Lana's acceptance speech was one of the longest public appearances that either of the notoriously reclusive siblings has ever given. Again, the following is the two of them playing games with the media:

“She began by explaining that while she and her brother had not publicly commented on her transitioning during the past decade of rumors about it, this was not because she was ashamed of it, nor had she kept it a secret from her family and friends. Rather, Lana had not commented about her transitioning due to a general shyness about the news media that both she and her brother Andy possess. Comparing it to losing one's virginity as an event which only happens once and is irreversible, the Wachowskis had tried to stay out of the public eye and avoided giving interviews due to fear of losing their personal privacy, fearing that they would never be able to go to a public restaurant again without being noticed and harassed as celebrities.

And they are both lucid dreamers.

The American directors, writers, producers, best known as the creators of The Matrix (1999), are lucid dreamers who drew on this notion to create a virtual reality world in which we are all mentally enslaved, not recognising that we are merely "dreaming". According to the official Matrix website, they drew on a whole host of philosophies to devise the plot, including Descartes, Mahayana Buddhism and the proverbial "brain in the vat" problem. The conundrum of The Matrix is:
"How do I know that my reality is not an illusion?"
This is the key to unlocking a dream and becoming consciously lucid. The Wachowski Brothers convey this and more in their sci-fi trilogy. They show us that the simple awareness that you are dreaming is not enough (Neo knew this from the start, yet he still wasn't able to control the Matrix). Instead, you must train your mind  before you can achieve full creative action. Like Neo, many newbie lucid dreamers have difficulty flying (or at least staying airborne) until they have been through their own personal training regime. We learn the mental perspective required to understand what makes flight possible in a non-physical dream world. Because of this insight, The Matrix is a veritable instruction manual for lucid dreamers.