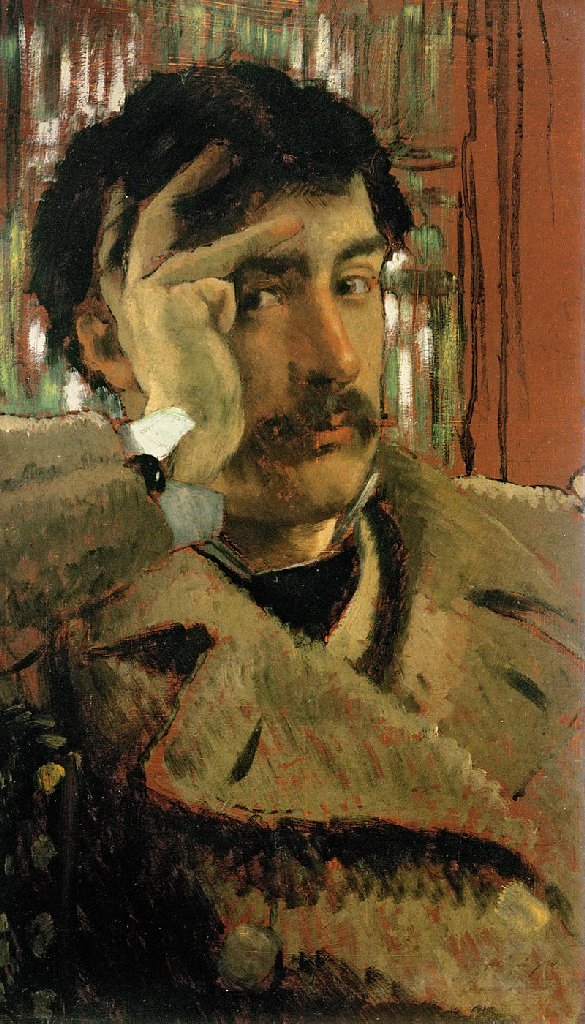 Tissot self portrait 1865 - before the experience [using twin horns
symbolism]

His paintings, beautifully executed and full of life and colour would merit a place on our site on their own merit, but Tissot is of especial interest as he had a profound – a truly profound spiritual experience which fundamentally changed the course of his career and his life.

Jacques-Joseph Tissot was born in 1836, in Nantes in a seaport on the French coast. He was the son of a very prosperous, successful shopkeeper, and both his mother and father were devout Roman Catholics. Tissot's mother instilled pious devotion in the future artist from a very young age and the young Tissot was sent away to a boarding school run by Jesuits.

Tissot at no time lost his belief in a spiritual world, but as time progressed, he became more interested in spirituality.  This interest directed the course of all his work.  Tissot never lost his Christian faith, he did not become a mystic or a ‘spiritualist’, but the experience he had appeared, if anything, to add reality to the beliefs he already had. 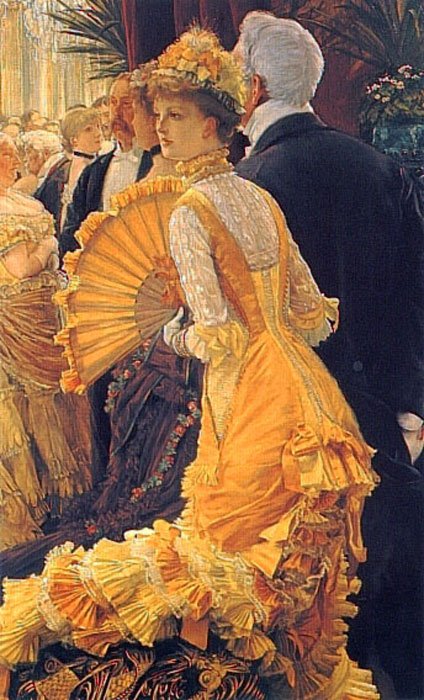 By the time Tissot was 17, he knew he wanted to pursue painting as a career. His father opposed this, preferring his son to follow a business profession, but the young Tissot gained his mother's support for his chosen vocation.

Like Alma-Tadema, and Edward Burne-Jones, Tissot changed his name at this time to draw attention to himself. In his case he anglicised his Christian name to James.

In 1859, Tissot exhibited in the Paris Salon for the first time. He showed five paintings of scenes from the Middle Ages, many depicting scenes from Goethe's Faust.  After Tissot had first exhibited at the Salon and before he had been awarded a medal, the French government paid 5,000 francs for his depiction of The Meeting of Faust and Marguerite in 1860, with the painting being exhibited at the Salon the following year, together with a portrait and other paintings. 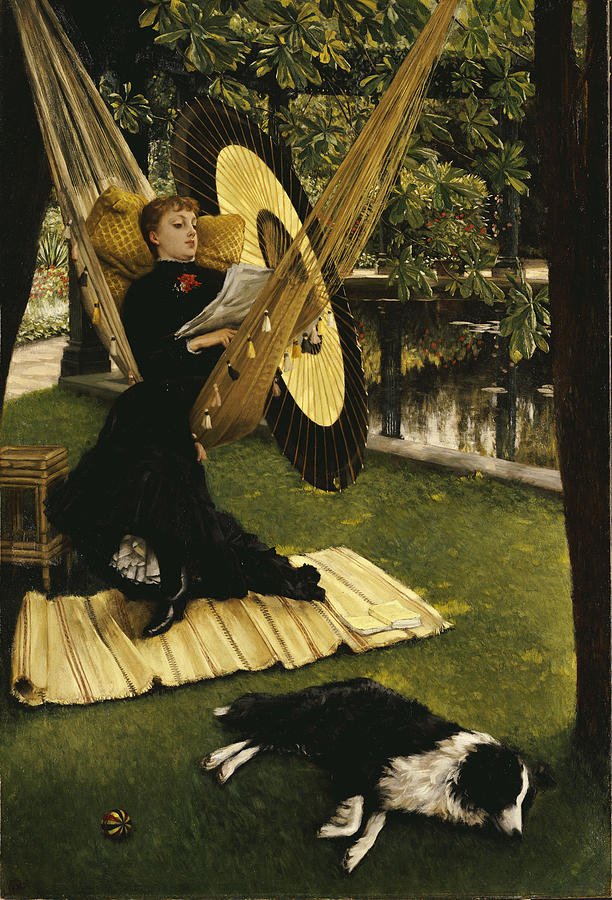 Success followed success and Tissot’s career can be deemed nothing but profitable and prolific.  Tissot had fully inherited the shrewd commercial instincts of his father, and like Alma-Tadema and Millais was a painter-entrepreneur.  There was no struggle, no starving garret life.  He socialised, he ate well and in the 1860s became something of a traveller, visiting Italy, and in 1862 London.

Tissot fought in the Franco-Prussian War as part of the improvised defence of Paris, joining two companies of the Garde Nationale and later as part of the Paris Commune. Either because of the radical political associations related to the latter (which he was believed to have joined mostly to protect his own belongings rather than for shared ideology), or because of better opportunities, he left Paris for London in 1871.

Having already worked as a caricaturist for Thomas Gibson Bowles, the owner of the magazine Vanity Fair, as well as exhibited at the Royal Academy, Tissot arrived with established social and artistic connections in London. Bowles gave Tissot a place to stay and a cartooning job for Vanity Fair.

Tissot quickly developed his reputation as a painter of elegantly dressed women shown in scenes of fashionable life. By 1872, Tissot bought a house in St John's Wood, an area of London very popular with artists at the time. According to The Oxford Dictionary of Art and Artists,
"in 1874 Edmond de Goncourt wrote sarcastically that he had 'a studio with a waiting room where, at all times, there is iced champagne at the disposal of visitors'".

And very nice too.  Just a hint of jealousy here one feels. 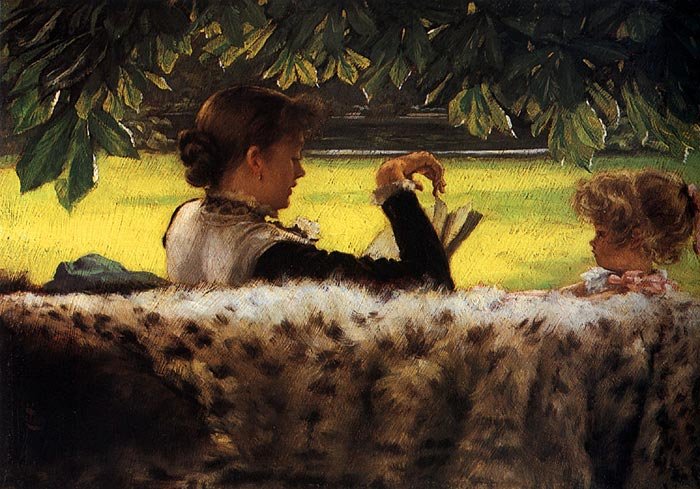 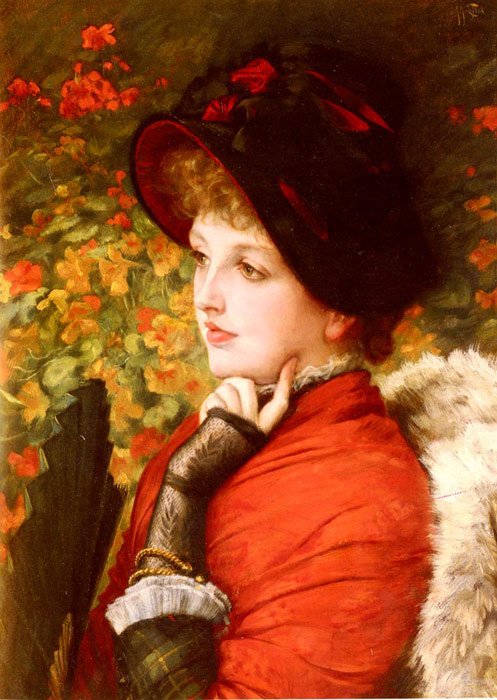 In the mid 1870s Tissot met Kathleen Newton (1854-1882), an Irish divorcee with a distinctly colourful past. She had formed a sexual relationship with a man on a voyage to India to be married, and borne his child. She too was a Catholic and shared Tissot’s strong beliefs.

Kathleen became Tissot’s model, muse, mistress, and the great love of his life. She gave birth to a son, Cecil George Newton in 1876, who is believed to be Tissot's son.  Tissot's paintings of his lady tell any observer of sensitivity of his love for her. Many other successful men kept mistresses in St John's Wood, but they did not, like Tissot, live openly with them in adulterous relationships. This situation forced the painter to choose between his social life and Kathleen. To his credit he chose his lover. 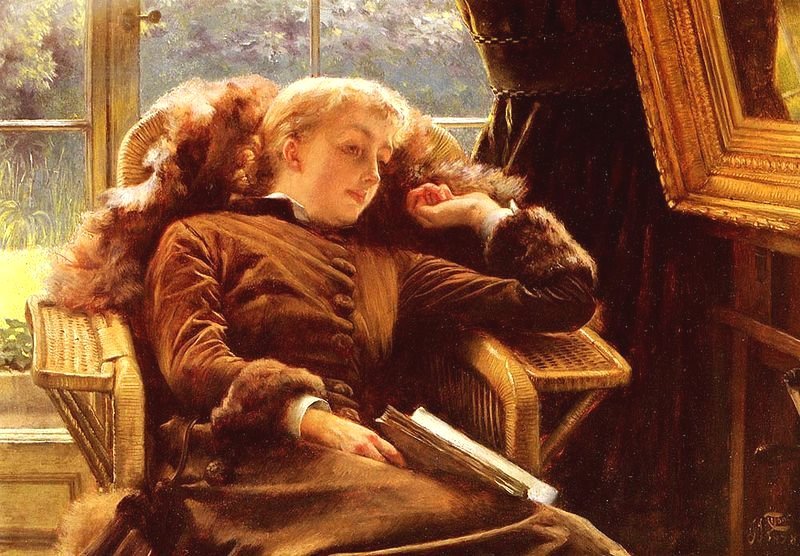 kathleen newton in an armchair  1878

It would be wrong to think that Tissot became something of a hermit, as he and Kathleen Newton entertained their more bohemian artistic friends at home.

But Tissot's days as a man-about-town were over, and he and Kathleen seem to have settled into a quiet life of domesticity.

Kathleen's two children lived close by with her sister. Kathleen Newton was an extremely attractive young woman, and appeared in many of Tissot’s paintings at this time. 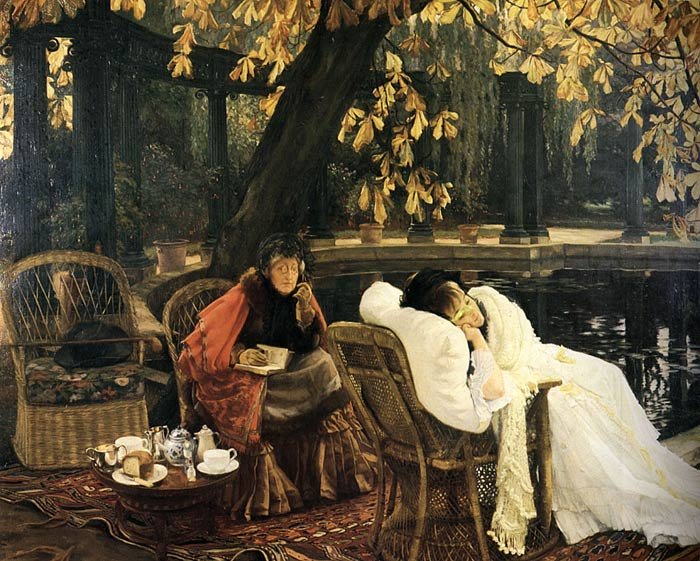 In the late 1870s her health started to decline, with the onset of that great 19th century killer Tuberculosis. Tissot remained devoted to her.

In 1882, the desperately ill Kathleen cheated consumption by committing suicide, and, as a result was not able to be buried in consecrated ground. Within one week, Tissot left his home at St Johns Wood, and never returned to it.

Tissot was devastated by his loss, and never really recovered from it.

He seemed unable to accept the enormity and permanence of it. Like many English people at this time Tissot became interested in Spiritualism, and on a number of occasions tried to contact the dead Kathleen.

Tissot moved back to Paris and still in a state of shock and denial carried on working back in Paris, in much the same manner as in London. He produced a series of paintings of attractive, beautifully dressed women in sumptuous surroundings. These paintings were, for a time, extremely fashionable.

But all was not well.

Although religious conversion always bears fruit in a person’s life, that fruit is sometimes not visible to the casual observer. In the case of the French artist James Tissot (1836-1902), however, the evidence of his conversion 125 years ago is still plain for all to see.

According to his own account, Tissot, at around age 48, saw a vision during Mass in the Church of St. Sulpice in Paris. Until that time his paintings had focused primarily on high-society life in Paris and London. After his mystical experience, Tissot’s work changed markedly. His next painting, “Inward Voices,” depicts his vision: an impoverished couple sit on the rubble of a building in ruins; beside them sits Jesus—scourged, bleeding and wearing a crown of thorns, yet present to comfort them. Tissot’s religious experience at St. Sulpice resulted in a lifelong directional shift in his artistic work. 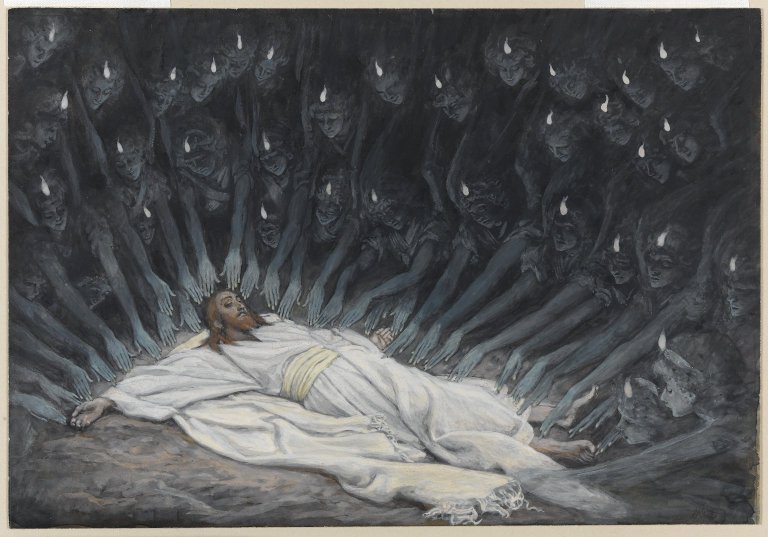 Following this profound religious experience, Tissot became increasingly devout. He embarked on a series of religious paintings, visiting the Middle East on a number of occasions, to observe and paint backgrounds for his oil paintings. At a time when French artists were working in impressionism, pointillism, and heavy oil washes, Tissot used watercolours. There is just the hint that he was trying to capture the Light.

To assist in his completion of biblical illustrations, Tissot traveled to the Middle East in 1886, 1889, and 1896 to make studies of the landscape and people. His series of 365 illustrations showing the life of Christ were shown to critical acclaim and enthusiastic audiences in Paris (1894–5), London (1896) and New York (1898–9), before being bought by the Brooklyn Museum in 1900.

They were published in a French edition in 1896–7 and in an English one in 1897–8, bringing Tissot considerable fame. During July 1894, Tissot was awarded the Légion d'honneur, France's most prestigious medal.

Tissot spent the last years of his life working on paintings of subjects from the Old Testament. Although he never completed the series, he exhibited 80 of these paintings. 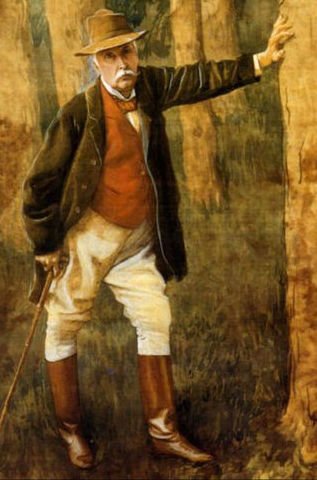 Tissot died suddenly in Doubs, France on 8 August 1902, while living in the Château de Buillon, a former abbey which he had inherited from his father in 1888.

Widespread use of his illustrations in literature and slides continued after his death with The Life of Christ and The Old Testament becoming the "definitive Bible images".

His images have provided a foundation for contemporary films such as Raiders of the Lost Ark and The Age of Innocence (1993).