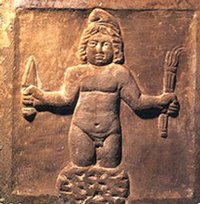 The Mithras Liturgy is part of the great magical codex of Paris (Papyrus 574 of the Bibliotheque Nationale). It is believed to date from about the early fourth century C.E./AD and contains a variety of tractates, hymns, recipes, and prescriptions, which were apparently collected for use in the working library of an Egyptian magician. Lines 475- 834 of the codex constitute the Mithras Liturgy.

The "Mithras" Liturgy from the Paris Codex - Edited and Translated by Marvin W. Meyer
The text of the Mithras Liturgy is composed of two main parts: a liturgical mystery of ascent (lines 475-750), and a set of instructions (lines 750-834) for the use of the mystery. 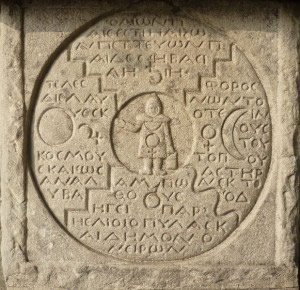 After the brief introduction (lines 475- 485), the mystery of ascent presents the seven liturgical stages for the soul's ecstatic journey: the soul thus encounters the four elements (lines 485-537), in their generative and regenerative aspects; the lower powers of the air (lines 537-585), including the winds, bolts of thunder and lightning, and meteors; Aion and the Aionic powers (lines 585-628) , as planetary guardians of the heavenly doors; Helios (lines 628-657), young and fiery; the seven Fates (lines 657-672) and, next, the seven Pole-Lords (lines 673-692), both groups from the region of the fixed stars, and both depicted in Egyptian fashion; and finally the highest God (lines 692-724), portrayed like Mithras himself.
After the conclusion (lines 724-750) to the mystery of ascent, the instructions for the use of the mystery present a scarab ceremony of the sun (lines 750-798) provide instructions for the obtaining of the kentritis herb and the fashioning of amulets (lines 798-830) and append two additional spells (lines 831-834)
The predominant place of magic within the Mithras Liturgy deserves special mention. The entire text of the Liturgy is permeated with magic, including breathing techniques (cf. lines 537-538: drawing in breath from the rays) , special recipes (cf. lines 750-755: preparing the cake for the scarab), magical rituals (cf. lines 767-769: burying the scarab) amulets (cf. lines 659-660: kissing the amulets), and magical formulae.
The magical formulae themselves are diverse in character: some seem onomatopoetic (cf. line 488, PPP: making a popping sound, possibly like thunder), symbolic (cf. line 487, AEEIOYO: using the seven vowels in a series), or perhaps glossolalic (cf. line 492, EY EIA EE); some seem derived from or imitative of Greek (cf. line 562, PROPROPHEGGE: Primal Brightener?) Egyptian (cf. line 672, ARARRACHES: Horus of the two horizons; and line 717, PHRE: Re, the Sun) , or Semitic words (cf. line 591, SEMESILAM: Eternal sun; and line 593, IAO: Yahweh).

So in this translated codex we have examples of very specific spells.

I suspect the very act of translation has removed the essence of the spell itself, because the translator has assumed a word based spell rather than a musical spell, but despite the mistranslation, we still have some interesting clues in the text. 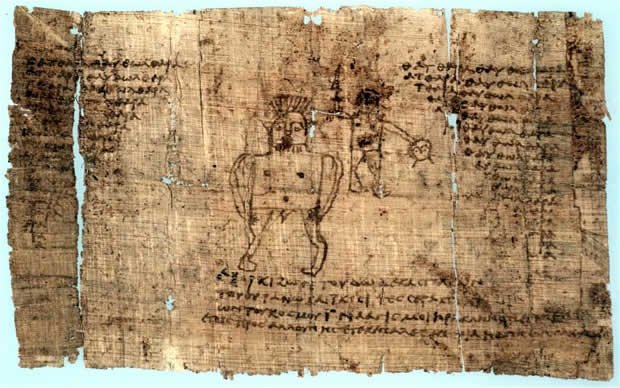