Attila von Szalay, [date of birth and death unknown]  known to his friends as Art, was an American photographer of Hungarian descent, described by his contemporaries as “ a gifted psychic and yogic practitioner”.  He lived in southern California for most of his life but was born in New York, travelling west in the 1940s to take up a career in photography. 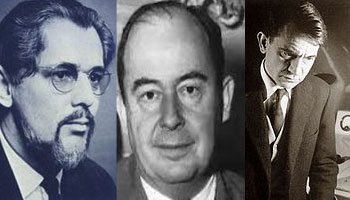 His psychic abilities developed spontaneously when he was a young man, and he took up yoga in order to develop them.  As a consequence of his yogic studies, his psychic abilities ‘blossomed’, including the ability to leave the body at will. He even took particular delight in popping in on people now and then.

Raymond Bayless, a 2l-year veteran of Los Angeles's ‘psychic scene’ was a witness to von Szalay's remarkable abilities as well as the victim of some of his more bizarre and sudden ‘appearances’. Bayless documented several examples of von Szalay's ability at OBEs and telepathy in his book  Experiences of a Psychical Researcher.  It might be added that Art also had auditory hallucinations.

Attila von Szalay was among the first to try recording what he believed to be ‘voices of the dead’ as a way to augment his investigations in photographing ghosts. He began his attempts in 1941 [some sources say 1936] using a 78 rpm record, but it wasn't until 1956, after switching to a reel-to-reel tape recorder, that he believed he was successful.

Working with Raymond Bayless, von Szalay conducted a number of recording sessions with a custom-made apparatus, consisting of a microphone in an insulated cabinet connected to an external recording device and speaker. Szalay reported finding many sounds on the tape that could not be heard on the speaker at the time of recording, some of which were recorded when there was no one in the cabinet.

He believed these sounds to be the ‘voices of discarnate spirits’. Among the first recordings believed to be spirit voices were such messages as "This is G!", "Hot dog, Art!", and "Merry Christmas and Happy New Year to you all".  Friendly spirits then.

A Look Behind the "The Ghost Orchid" by Mark Poysden

The psychic Attila von Szalay, who frequently heard disembodied voices in the air around him, started researching the phenomenon with Raymond Bayless, a psychologist in the early 1950s. Their initial attempts with a 78 RPM Pack-Bell record-cutter and player were disappointing. Undeterred, they continued their efforts using a device that Bayless had devised and constructed. It consisted of a cabinet with an interior microphone resting inside a speaking trumpet. The microphone chord led out of the cabinet and was connected to a tape recorder and a loud speaker. Almost immediately, they began to hear whispers originating from inside the cabinet and duly recorded them. …. Von Szalay carried on taping for many years using an open microphone connected to a reel-to-reel recorder and he achieved excellent results.


Von Szalay and Raymond Bayless' work was published by the Journal of the American Society for Psychical Research in 1959. Bayless later went on to co-author the 1979 book, Phone Calls From the Dead. 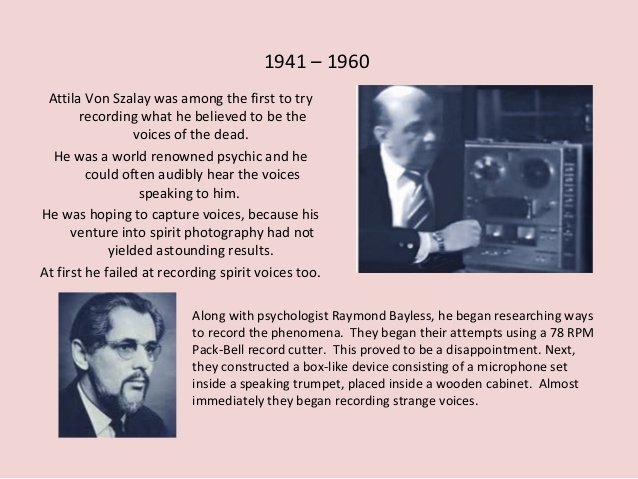 At this point, it may be helpful to read the section on 'Electronic Voice Phenomenon' – or EVPs.  His OBEs and other psychic experiences were genuine.