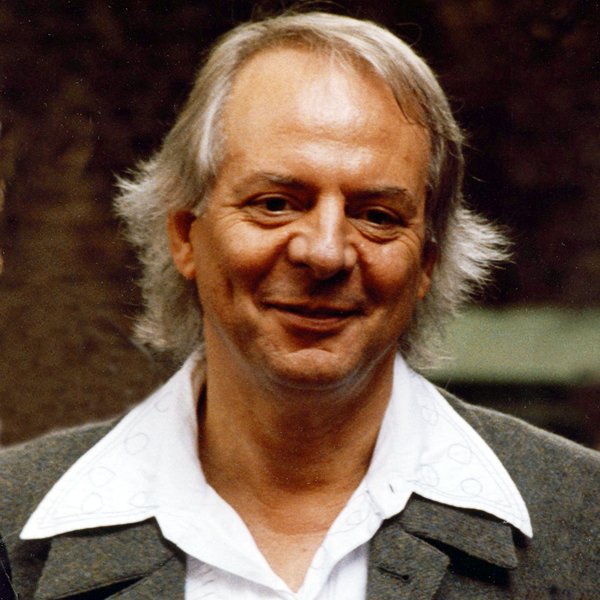 Karlheinz Stockhausen (1928 –2007) was a German composer, who was considered both  influential but also controversial.

You don't 'like' Stockhausen's work, because his intention was never that you should 'like' it - treat it as soothing background music.  What he created was intended to be used for spiritual purposes.  This is why he called his music by the names of some of the techniques on this website, for example, Mantra.

Superficially he is a composer, he was also something of a genius. But I look on him as a sort of magician of music. He had a sense of humour too, like all good magicians. 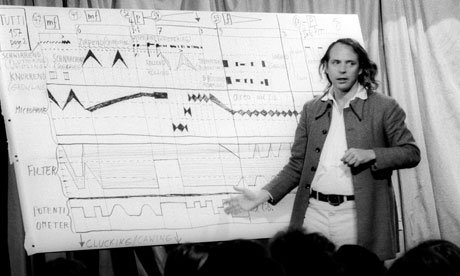 Even the language he used to describe the music was designed to keep the magician's secrets -  "process composition" , "intuitive music" .  I think he knew that the public at large would not understand why he was doing it, but if he wrapped the process in language designed to impress and confuse – magician's language - everyone would be taken in and accept what he was trying to do.  And he was right, they did.

It is clear that some people have cottoned on to what Stockhausen was trying to do.  But a magician needs to keep his tricks a secret, so those who have understood tend to acknowledge the effects without giving away the trick,  Brian Ferneyhough, for example, said that:

“although the technical and speculative innovations of Klavierstücke I–IV, Kreuzspiel and Kontra-Punkte escaped me on first encounter , they nevertheless produced a sharp emotion, the result of a beneficial shock engendered by their boldness... and provided an important source of inspiration for my own investigations" 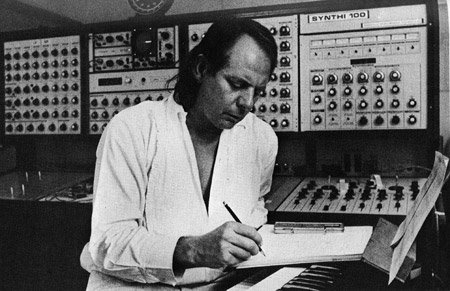 Some of his notable compositions include the series of nineteen Klavierstücke (Piano Pieces), Kontra-Punkte for ten instruments, the electronic/musique-concrète Gesang der Jünglinge, Gruppen for three orchestras, the percussion solo Zyklus, Kontakte, the cantata Momente, the live-electronic Mikrophonie I, Hymnen, Stimmung for six vocalists, Aus den sieben Tagen, Mantra for two pianos and electronics, Tierkreis, Inori for soloists and orchestra, and the gigantic opera cycle Licht.

Stockhausen knew the spiritual world extremely well.  The  opera "Light: The Seven Days of the Week"), actually deals with the planets as archetypes as well as the archetypes of  Michael, Lucifer, and Eve.   He uses somewhat corrupted symbolism at times, but he still uses archetypes and symbols, for example “I have defined Lucifer as the cosmic spirit of rebellion, of anarchy. He uses his high degree of intelligence to destroy creation. He does not know love”. 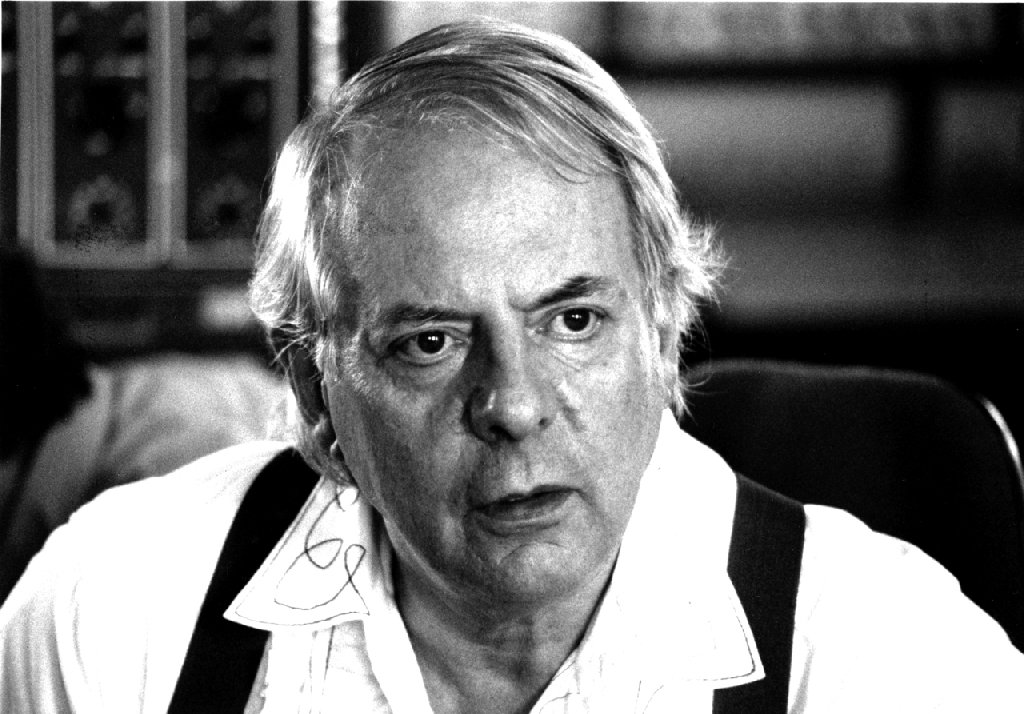 He was influenced by the Japanese Noh theatre, Judeo-Christian and Vedic traditions and  Sri Aurobindo.  In  2001, Stockhausen said "I pray daily to Michael, but not to Lucifer. I have renounced him. But he is very much present”.

Stockhausen was also it appears a believer in the Great Work, fate,  destiny and the puppeters [see puppet].  He interpreted the twin tower bombing as some act that had a spiritual purpose  “..... what happened there is, ….the biggest work of Art [Art here means intervention, action – Shakespeare's actors on the stage of life] there has ever been. The fact that spirits achieve with one act something which we in music could never dream of  ...... Just imagine what happened there. There are people who are so concentrated on this single performance, and then five thousand people are driven to Resurrection. In one moment. …. It is a crime ...... of course, because the people did not agree to it. They did not come to the "concert". That is obvious. And nobody had told them”.

Stockhausen “had dreams of flying throughout his life”, so there is the indication he could lucid dream or go out of body.

What tricks did he use?

Squashing the big I am - His music is an ego buster because it attacks the ego of the self styled music afficianado.

Befuddling – His music  is especially intended to defy reason – harmonies are unexpected, chords are all 'wrong', he intersperses the music with noises that are not music as commonly accepted sounds.

Stockhausen  used electronic music extensively, but he used just about anything to break pattern and rhythm - the human voice, percussion instruments, electronic tape music,  transformers, generators, modulators, magnetophones, tam-tam, microphones, filters with potentiometers, choirs, Hammond organ, four ring modulators and pre-existent music from world traditions.  Whereas just about every other composer uses constant pulsed sound to create an effect, Stockhausen does the opposite. 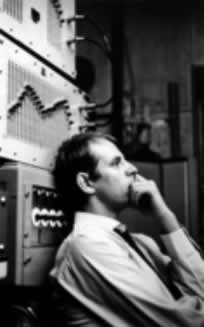 He explored improvisation as a way of creating 'anarchy' and thus defy reason; he wrote scores where each performer could start on any page, read it upside down, or from right to left, as the performer chose.  Still other works allowed the performer to choose different routes through the constituent parts.   Kontra-Punkte ("Against Points", 1952–53), contains sequences that have opposing simultaneous themes.   In Gruppen (1955–57), he uses sudden startling fanfares and passages of varying speed.

There is a sort of comic aspect to the fact that many serious music goers go to his concerts stating solemnly that they 'understand' his music.  First they are undoubtedly fibbing.  But if they do, they have failed, because to get the effects from it, you need to be utterly befuddled by it.  If you see poncy words like “aleatory (controlled chance) in serial composition” and “musical spatialization” in descriptions of his works, then you can be sure the writer hasn't got the point either.

Resonance – Stockhausen varied the notes so that they were all over the scale from almost infrasound to almost ultrasound – the intention here being to hit people's various resonant frequencies and create unexpected and to them inexplicable results.  Many of these notes are very very long and drawn out – timbres – in order that resonance has time to work. 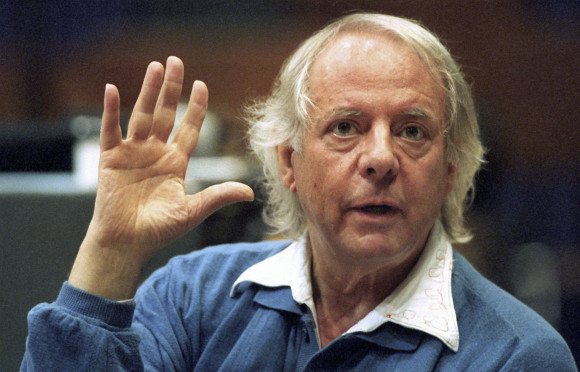 In lectures such as "Music in Space" from 1958  he called for new kinds of concert halls to be built, "suited to the requirements of spatial music". His idea was a spherical space which is fitted all around with loudspeakers. Surround sound, perhaps the most effective way to induce resonance and be transported to another world.  Where U2 now use subwoofer speakers, Stockhausen was trying to do the same thing.

In the middle of this spherical space a sound-permeable, transparent platform would be suspended for the listeners. They could hear the music ... coming from above, from below and from all points of the compass. (Stockhausen Texte 1:153)

So better than a U2 concert.  In 1968, the West German Pavilion at the 1970 World Fair contained one of Stockhausen's  spherical spaces with the audience in the centre; it was  surrounded by loudspeaker groups in seven rings at different "latitudes" around the interior walls of the sphere. 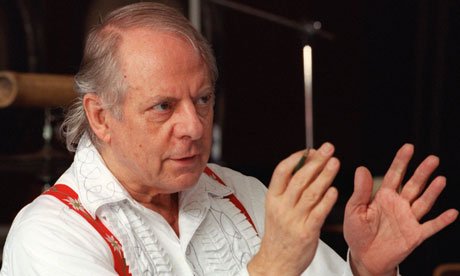 Stockhausen's works were performed for 5½ hours every day over a period of 183 days to a total audience of about a million listeners  "Many visitors felt the spherical auditorium to be an oasis of calm amidst the general hubbub, and after a while it became one of the main attractions of Expo 1970".

One of the most extraordinary techniques he used was in the Helikopter-Streichquartett, completed in 1993. Both helicopter blades and noise – the throbbing loud sounds of the engines – induce spiritual experience [see the link for more detail of how].  In Stockhausen's work, four members of a string quartet perform in four helicopters flying independent flight paths over the countryside near the concert hall. The sounds they play are mixed together with the sounds of the helicopters and played through speakers to the audience in the hall.

Spells - Stockhausen not only understood the theory of how you can get a spiritual experience, but also what underpins the spiritual.  From 1954 to 1956, he studied phonetics, acoustics, and information theory with Werner Meyer-Eppler at the University of Bonn.  Information theory is underpinned with mathematics – mostly set theory and pure mathematics,  In 1955, Stockhausen formulated new "statistical" criteria for composition,  "the change from one state to another, with or without returning motion, as opposed to a fixed state" .  So we have the I Ching like state changes.  Function dependencies, the music of the universe - songlines.

What was his inspiration?

He married twice and had six children.   Four of Stockhausen's children became professional musicians who were greatly involved in his projects, but whilst love was a major happy part of his life,  this was not what drove him. 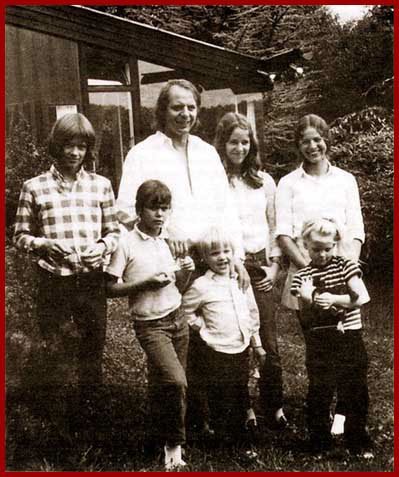 Stockhausen was born in the Burg Mödrath, a "castle" owned by the Düsseldorf chapter of the Knights of Malta.  His mother Gertrud played the piano and accompanied her own singing.  Thus from a genetic point of view he was ready for anything to open the door.  And that something came along.  First, his mother Gertrud had a mental breakdown and was institutionalized in December 1932, when he was only 5.

Then in 1938 his father remarried, and because his relationship with his new stepmother was less than happy, he became a boarder at the teachers' training college in Xanten.  In 1942, aged 14, he learned that his mother had died, ostensibly from leukemia, although everyone at the same hospital had supposedly died of the same disease. It was generally understood that she had been a victim of the Nazi policy of killing "useless eaters".   Stockhausen later dramatized his mother's death in hospital by lethal injection.  I think we can therefore conclude that Stockhausen's initiation into the world of the spiritual was occasioned by psychological trauma of a quite terrible kind.

This was further heightened when, in February 1945, he met his father for the last time in Altenberg. His father, who was on leave from the front, told his son, "I'm not coming back. Look after things". By the end of the war, his father was regarded as missing in action.

And from that point on, the door was wide open.

Stockhausen has been called "one of the great visionaries of 20th-century music" and indeed he was a visionary, with a very acute understanding of the spiritual world and what you need to do to reach it. 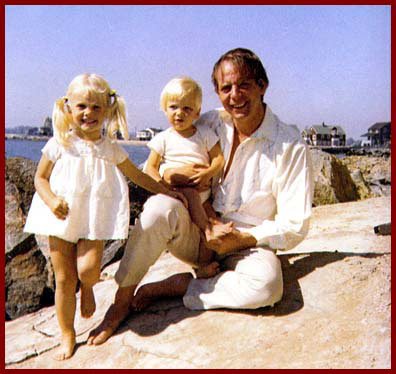 It is no coincidence that one of his longest and demanding works is simply called 'Light' – the aether level in particular, and the stars.  I'm certain that that is where he lived for most of his life.  In an obituary in the German newspaper Die Zeit,  Stockhausen was quoted as having said:  I was educated at Sirius and want to return to there, although I am still living in Kürten near Cologne.  I’m sure that that is where he has returned - home.

He died of sudden heart failure at the age of 79, on 5 December 2007 at his home in Kürten, Germany.