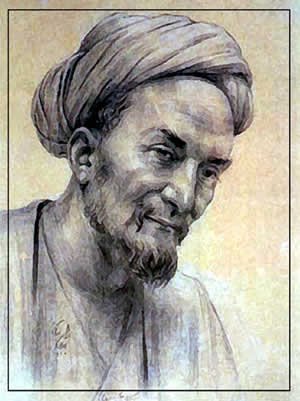 Abu-Muhammad Muslih al-Din bin Abdallah Shirazi, Saadi Shirazi better known by his pen-name as Sa'di or simply Saadi, was one of the major Persian poets of the medieval period.

We do not know for certain when he was born. Scholars have never agreed on a date. According to tradition he was born between 1184 and 1185 CE. More recent scholarship places his birth in the early 13th century CE, perhaps as late as 1219. Scholars do agree that he died in or around 1292. If he was born in 1184, he enjoyed an unusually long life, dying at an improbable 108 years of age

A native of Shiraz, his father died when he was an infant. Saadi experienced a youth of poverty and hardship, and left his native town at a young age for Baghdad to pursue a better education. As a young man he studied at the famous an-Nizamiyya center of knowledge. 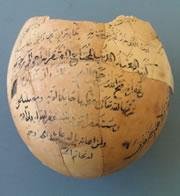 The unsettled conditions following the Mongol invasion of Khwarezm and Iran led him to wander for 30 years through Anatolia, Syria, Egypt, Iraq, and Sindh (Pakistan) where he met Pir Puttur, a follower of the Persian Sufi grand master Shaikh Usman Marvandvi. He then went to India and Central Asia (where he met the survivors of the Mongol invasion in Khwarezm).  He also performed the pilgrimage to Mecca and Medina and visited Jerusalem.

Saadi traveled through war wrecked regions from 1271 to 1294. Due to Mongol invasions he lived in desolate areas and met caravans fearing for their lives on once lively silk trade routes. Saadi lived in isolated refugee camps where he met bandits, Imams, men who formerly owned great wealth or commanded armies, intellectuals, and ordinary people. .... He sat in remote teahouses late into the night and exchanged views with merchants, farmers, preachers, wayfarers, thieves, and Sufi mendicants. ..... Saadi's works reflect upon the lives of ordinary Iranians suffering displacement, plight, agony and conflict, during the turbulent times of Mongol invasion.  Saadi was also among those who witnessed first-hand accounts of Baghdad's destruction by Mongol Ilkhanate invaders led by Hulagu during the year 1258. 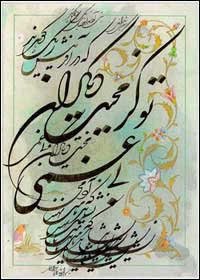 Saadi was captured by Crusaders at Acre where he spent 7 years as a slave digging trenches outside its fortress. He was later released after the Mamluks paid ransom for Muslim prisoners being held in Crusader dungeons.

Saadi - The Gulistan of Sa‘di – from The Morals of Dervishes

Having become tired of my friends in Damascus, I went into the desert of Jerusalem and associated with animals until the time when I became a prisoner of the Franks, who put me to work with infidels in digging the earth of a moat in Tarapolis, when one of the chiefs of Aleppo, with whom I had formerly been acquainted, recognized me ……He took pity on my state and ransomed me for ten dinars from the captivity of the Franks, taking me to Aleppo where he had a daughter and married me to her with a dowry of one hundred dinars. After some time had elapsed, she turned out to be ill-humored, quarrelsome, disobedient, abusive in her tongue and embittering my life:

A bad wife in a good man’s house
Is his hell in this world already.

When he reappeared in his native Shiraz he was an elderly man. Shiraz, under Atabak Abubakr Sa'd ibn Zangy (1231–60) was enjoying an era of relative tranquility. Saadi was not only welcomed to the city but was accorded great respect.  In gratitude, Saadi took his nom de plume from the name of the local prince, Sa'd ibn Zangi.  The remainder of Saadi's life seems to have been spent in Shiraz.

His best known works are Bostan (The Orchard) completed in 1257 and Gulistan (The Rose Garden) in 1258.

Saadi is also remembered as a panegyrist and lyricist, the author of a number of odes portraying human experience, and also of particular odes such as the lament on the fall of Baghdad after the Mongol invasion in 1258. His lyrics are found in Ghazaliyat (Lyrics) and his odes in Qasa'id (Odes). 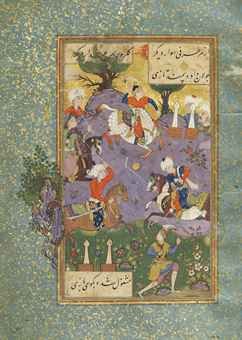 The unique thing about Saadi is that he embodies both the Sufi Sheikh and the travelling merchant. They are, as he himself puts it, two almond kernels in the same shell.

Where did he get his inspiration?  There are a number of influences in his life that would have had an effect - the humiliation of being a slave, the insecurity of the times, but he himself seems to indicate a more abiding theme that ran through his life in the following extract:

Astride a horse I am not, nor camel-like carry a load,
Subjects I have none, nor follow any sultan's code;
I worry not for what exists, nor fret for what is lost,
I breathe with extreme ease, and live at very little cost.

So if I summarise this in terms of activity it is: 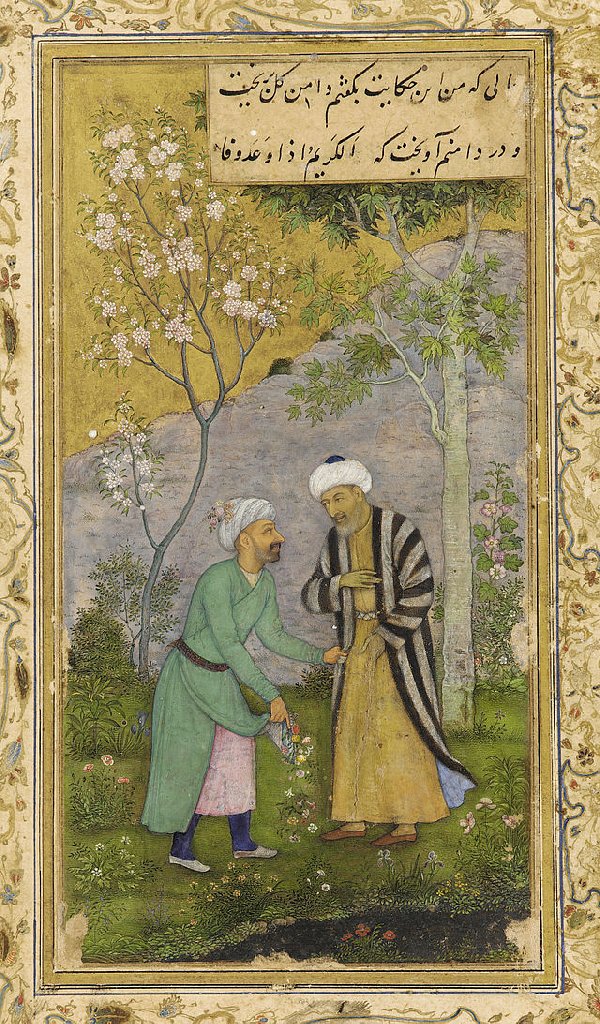 Saadi in a Rose garden

Humans (children of Adam) are inherent parts (or more literally, limbs) of one body,
and are from the same essence in their creation.
When the conditions of the time hurts one of these parts,
other parts will be disturbed.
If you are indifferent about the misery of others,
it may not be appropriate to call you a human being. 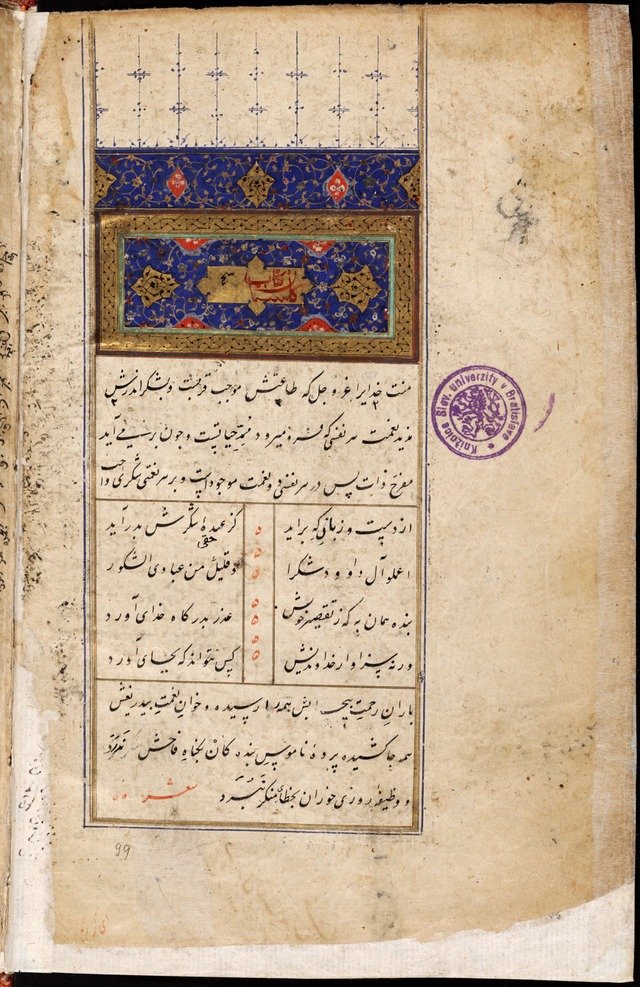 Gulistan – I have used Edward Rehatsek’s translation of the Gulistan or Rose Garden of Sa‘di originally published in 1888 by the Kama Shastra Society.

Hungarian by nationality, Rehatsek was born and educated within the borders of the Austrian Empire, but “his lucid and idiomatic English translations betray no suggestion that English was other than his first language”.

Whilst other prior translations of the Gulistan into English exist, Rehatsek undertook the translation aiming for fidelity rather than elegance.

It also includes passages that other translators omitted or bowdlerized because – being completely ignorant of the symbolism and full of Victorian prudery – they found offensive.

The Bustan or Orchard of Sa‘di was written prior to the Gulistan. Its approach is more formal and it is written entirely in verse. It includes fables, tales from history, proverbs, and maxims. Many of these tales and proverbs Sa‘di had picked up in his years of travel. The work includes ten sections covering justice, counsel, and the administration of government; benevolence; love; humility; resignation and submission; contentment; education; gratitude; repentance; and prayer.

the Bustan has not been served well in English translation; such translations of the work are invariably disappointing. They’ve never been better than adequate at capturing the beauty of Sa‘di’s verse. But the companion work of the Bustan, the Gulistan or Rose Garden of Sa‘di written one year later, mixes prose and poetry and translates well.