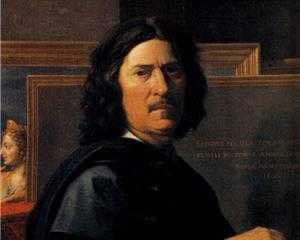 Nicolas Poussin (1594 – 1665) was a French painter whose work emerged as an alternative to the dominant Baroque style of the 17th century. He spent most of his working life in Rome, except for a short period when Cardinal Richelieu ordered him back to France to serve as First Painter to the King.
His career started to flourish when Giambattista Marino, the court poet to Marie de Medici,  employed him to produce a series of illustrations for a projected edition of Ovid's Metamorphoses.

“It has been suggested that it was this early friendship with Marino, and the commissioning of illustrations of this poetry, that founded, or at least reinforced, the prominent eroticism in Poussin's early work.”  Or maybe he was just that way inclined n'est ce pas?

Poussin was thirty when he arrived in Rome in 1624. His first patron was Cardinal Francesco Barberini.  Not surprisingly much of his early work has a religious theme, for example, the commission for St. Peter's the Martyrdom of St. Erasmus .  At the time the papacy was Rome’s foremost patron of the arts. But Poussin’s Martyrdom of St. Erasmus was Poussin’s only papal commission, he was not asked again to contribute major altarpieces or paint large scale decorations for a pope.

We should ask why.  And there are two possible reasons.  The first is that he was not keen on adopting the new style of painting and design being used within the church, the 'Roman Baroque style'.  The second reason however had a lot to do with subject matter.

Poussin liked 'classical' themes – nymphs, satyrs, gods, naked ladies with sensuous bodies dancing in leafy sacred groves.  He was of the old school of mystical painters – the sensuous sexual school.  He was not alone.  Poussin  tended to befriend artists with 'classicizing' artistic leanings: the French sculptor François Duquesnoy whom he lodged with in 1626; the French artist Jacques Stella; Claude Lorraine; Domenichino; and Andrea Sacchi.  It was a dilemma because the Catholic church had the money, so compromise was needed.  Nevertheless, throughout his life Poussin stood apart from the popular tendency toward the decorative in French art of his time. In Poussin's work “a survival of the impulses of the Renaissance is coupled with conscious reference to the art of classical antiquity as the standard of excellence”.

Needless to say his subsequent career depended on private patronage – including a few cardinals who had perhaps more eclectic tastes in painting. His first patron was Cardinal Luigi Omodei, for whom he produced the Triumphs of Flora (c 1630–32, Louvre). Flora is a goddess.

But  in 1640, he was recalled to France where Louis XIII conferred on him the title of First Painter. In two years at Paris he produced several pictures for the royal chapels (the Last Supper, painted for Versailles, now in the Louvre), eight cartoons for the Gobelins tapestry manufactory, the series of the Labors of Hercules for the Louvre, and the Triumph of Truth for Cardinal Richelieu (Louvre).

You can sense that there is a tension apparent in all his life between the demands of his patrons and the call of his heart.  In 1642, disgusted by the intrigues of Simon Vouet, Fouquières and the architect Jacques Lemercier, Poussin withdrew to Rome.   Again though it was back to religious themes -  the Seven Sacraments.

He only really comes into his own when he is allowed to paint what his heart believes in.  Year by year he continued to produce an enormous variety of works, but it made him ill.  The first time he fell ill he was taken into the house of his compatriot Jacques Dughet, where he was nursed by Dughet’s daughter, Anna Maria, who Poussin married in 1630, but he suffered from continually declining health and was troubled by a worsening tremor in his hand, evidence of which is apparent in his late drawings.  The emotional strain eventually took its toll.  He died in Rome on 19 November 1665 and was buried in the church of San Lorenzo in Lucina, his wife having predeceased him.

Poussin was “concerned with emotion in a generalized and not specific way ... Thus in both compositions of Et in Arcadia Ego (even in Arcadia I exist) the theme is the realization of death in life. The specific models hardly matter. We are not intended to have sympathy with them and instead we are forced by the artist to think on the theme."

So says the quote, but Poussin was a spiritual man who painted spiritual themes as best he could at a time when the climate was not at all favourable to such pursuits.  We can say in a broad generalisation that Poussin suffered his entire life from emotional overload.

Just a few paintings show that where his heart lay was in ‘sexual stimulation’ and all that it involved.