The box or coffin is symbolically the same as a cage.

In other words by being born the person inside has spiritually died - by gaining ego and personality he has lost touch with the Higher spirit and 'home' - Arcadia.  In Greek mythology, Arcadia was the home of the god Pan.

There are four levels and layers to the box and it is essentially rectangular reinforcing the Earth nature of the symbolism.

The figures are not 'shepherds' as it sometimes says in explanations, they are gods in spiritual realms above that of the elements.  There is the implication that they are gods who are human - ie living gods, as they have clothes and wear shoes - sandals [which is halfway to wearing no shoes].  But this may not be the symbolism Poussin intended.

The painting appears to be an allegory of the dangers of letting the Ego take control.  It also appears to be a homage to a lost age - the loss of the connections to the spiritual world caused by the rise of Roman influence [whether pre or post Christian influence]. 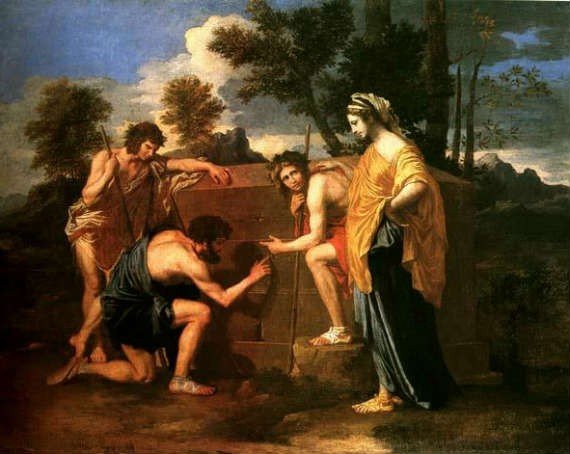